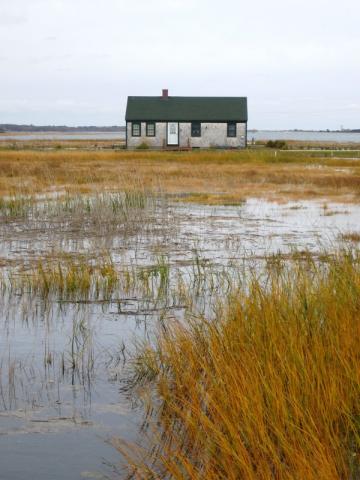 During high tides on October 28 and 29, 2015, coastal residents around the Gulf of Maine participated in the second annual King Tides Photo Contest. Their images document scenes that will become more common as sea levels rise. More than 100 images were submitted. The grand-prize winner is Heidi M. Davis of Massachusetts. She will receive a waterproof digital Fujifilm camera donated by Photo Market in Portland, Maine. The two runners-up, each of whom gets a gift contributed by Patagonia, are Mike Barron of New Hampshire and Neil Robichaud of New Brunswick. Finalists in the contest are Kirsten Howard and Jason McKibben, both for images taken in Seacoast New Hampshire. All the winning images and many more can be seen at http://gulfofmaine.kingtides.net. "There was real mix of weather conditions during the October king tides," notes Marina Schauffler, Climate Network Coordinator for the Gulf of Maine Council on the Marine Environment."Some images reflect how high waters are even under calm conditions while others show how storm surge further amplifies the rise." Sea levels within the Gulf of Maine have increased more than 7 inches (18 cm.) over the past century. Thermal expansion of water drives sea-level rise, and water temperatures in the Gulf of Maine are among the world's fastest-warming. With the accelerating disintegration of glaciers in Greenland and the West Antarctic Ice Sheet, scientists now anticipate by 2100 an additional rise in global sea levels of at least 31 inches (80 cm.) and possibly 6 ft (183 cm.) or more. "It's important that we work together around the Gulf of Maine," Schauffler adds,"to understand and address how climate change is reshaping our shores and our lives."More than a dozen organizations in three states and two Canadian provinces collaboratively organized the regional photo contest. Partners in the regional King Tides Project include the Gulf of Maine Council on the Marine Environment-Climate Network, King Tides Project, Casco Bay Estuary Partnership, Ecology Action Centre, Envisioning Change/University of Southern Maine, EOS Eco-Energy, Friends of Casco Bay, Great Bay National Estuarine Research Reserve, Maine Geological Survey, Massachusetts Bays National Estuary Program, New Hampshire Coastal Adaptation Workgroup, New Hampshire Department of Environmental Services/Coastal Program, New Hampshire Sea Grant, St. Croix Estuary Partnership, and Wells National Estuarine Research Reserve. The Limulus Fund at the Maine Community Foundation provided support for this Gulf of Maine Council--Climate Network project. Above is the winning photo.