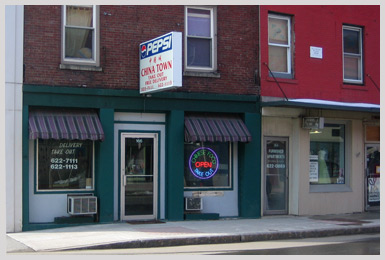 China Town: "the best Chinese takeout in the state of Maine."

UPDATE: We're sorry to report that China Town closed at the end of 2009

Late one afternoon, Water Street, Augusta, waiting for a red light to turn green. On the left corner ahead, a sign: “Cosmic Charlie’s. Have You Ever Been Experienced?” On the right corner: “Video Game Exchange.” On the building to the left: “Bread of Life Ministries, Sorry We’re Closed.” Next to it: “Tattoos, Piercing, Electric Skin Designs.” Across the street, to the right: “China Town, Chinese Food, Take Out,” and in electric-red neon, “OPEN.” Chinese? Why not? As a general rule, I don’t mess with Chinese takeout, especially in a neighborhood as sorry as downtown Augusta on a dismally cloudy Saturday afternoon, but my wife, the cook, was in Boston visiting her sister and I had to do something. I pulled over and parked. Have you ever walked into a business, looked around, realized you made a big mistake, and stayed anyway because you didn’t want to embarrass yourself by disappointing the chipper little sales clerk smiling expectantly behind the counter? That happened to me. China Town was a tiny, nondescript hole-in-the-wall with a couple of tired Formica-topped tables and garish photographs of various Chinese meals on the walls. It lacked warmth. It lacked heart. There was nothing about its message that suggested that good food would be served therein. An icy-cold hand gripped my heart. The history of bad food in restaurants I should never have entered passed before my eyes. (Who could ever forget the establishment in East Anglia gussied up to look like a Texas saloon and the hamburger served there that looked like a refried hockey puck between two halves of a split Yo-Yo?) I gave serious thought to the Cooper’s Mills General Store and a can of beans and a package of franks to go, but no, I said to myself, in for a dime, in for a dollar, and decided to tough it out. I have lots of experience with Chinese food, primarily gained in the late 1970s when I had a short-term assignment in San Francisco. The conditions were good (I didn’t have to wear a tie to work, and I lived on a boat), but the pay was not so good. I economized by eating most of my meals in Chinatown. If you stayed away from the tourist joints, the food was cheap. I had simple rules for choosing a restaurant in Chinatown. There had to be Chinese characters on the menu, and the waiters, cooks, and patrons—all of them—had to be Chinese. Show me a Caucasian and I was out of there. The system never failed me. I may not have been able to understand a word of what the waiter said, or read a word on the menu, but I had some knockdown, dragout, fantastic meals nevertheless. After the initial shock wore off, I noted that Augusta’s China Town almost fit the bill. Chinese woman at the counter; Chinese chef out back; a calendar with Chinese characters on the wall. All that was missing were Chinese patrons—in fact, there were no other patrons besides me—but I will give them this: there was a television that was tuned to a Chinese-language station. (Think about that for a moment; we’re talking Augusta, Maine.) So I swallowed my misgivings, picked a number off the board, and ordered it. Good old #C18, sesame chicken, crab rangoons, and pork fried rice. The first inkling I had that I was dealing with something more than your standard run-of-the-mill Chinese takeout parlor came when the chef went to work. The door to the kitchen was partially open, and by standing at the end of the counter and craning my neck, I had a clear shot of what he was doing, or rather, what he was not doing. He wasn’t throwing a bunch of pre-cooked stuff into the microwave. He wasn’t ladling sauce out of a vat with a grain shovel. Instead, he was cooking my meal to order, and when he was done he gave it to me in a neat package and thanked me for my patronage and I thanked him and his wife at the counter for their skill, and then I went out to the car and stored the package in the trunk. The second inkling I had that I was dealing with something of a higher order was the reaction of Betty, my little dog. She smelled the aroma of Chinese food on me and promptly attacked my sweater. Then when the smell from the package got into the ventilation system, she attacked the back seat to get into the trunk. The third inkling—nay, the proof—came when I got home and ate the meal. I don’t have the vocabulary of a hard-core foodie, so I can’t sling around the words that might be necessary to convince you that China Town has the best Chinese takeout in the state of Maine, but I can tell you that I am a student of pork fried rice, and I haven’t had any better anywhere, anytime. I can also tell you that when Eileen, my wife, came home and I told her about China Town, she laughed and called me a fantasist. There’s no such thing as great Chinese takeout, she said, especially across from a tattoo parlor on Water Street in Augusta, Maine. Furthermore, takeout of any sort is bad for your health, she said, and she wasn’t going to have any part of it. Then one day when we were passing through Augusta near the end of a road trip, I convinced her to give China Town a try. The fourth inkling that this is an establishment of the first rank: we have been back many, many times since, and if you know Eileen, that’s all you need to know.