At anchor with the operator Eva Murray’s recollections of the days of the Camden Marine Operator (MBH&H #93, March 2007) brought back a flood of our own memories. It was great fun to be at anchor in a cozy cove, fog rolling in or rain pattering on the overhead, listening to the trials and tribulations. I’m sure the young gal who called her friend and passed along her secret that she was eloping had 50 folks show up for the wedding. It was a sad day when the Camden Marine Operator signed off for the last time. And thanks for telling us about the 10-year-old boat owner (“In the Lee of the Boathouse,” same issue). What a great kid.
Kay Gibson Camden,Maine
The community of the Maine coast Working in the customer service field, I know that people are quick to complain but slow to fire off that letter to offer a compliment. I have been a subscriber to your magazine for a couple of years now and just want to say “thank you” for delivering a lovely visit every month or so to what I call “God’s Country.”Having sailed as passenger/crew since September 1980 on Penobscot Bay and the waters farther south and east, I’ve watched the Maine coast evolve and wished the best for the folks who live there year round and make their living around the water. I’ve enjoyed the articles you’ve published to learn about areas I haven’t visited firsthand and different aspects of those I think I know. Merci for all the hard work you and all the staff do to put that together. Many thanks also for soliciting that story from Eva Murray about the Camden Marine Operator. I love her writing, a little insight into what is happening in all seasons and into dealing with living on a small island, the people and situations she comes across. I have fond memories of the Camden Marine Operator and the soap operas and salty language you used to hear there—it made you seem in more of a community, good and ill.
Mary (Bridget) Rolfe Smyrna, Georgia
A simpler era While reading Eva Murray’s lovely article about the Camden Marine Operator (MBH&H #93,March 2007), I nostalgically remembered my many evenings listening in on those conversations. Each summer, at the end of June,my young children, Mali and Seth, and I would embark from the Great Bay (near Durham,New Hampshire) for Vinalhaven in my 20' Jonesport-style wooden lobsterboat. The marine radio was our only form of electronics back in the 1970s, and after dropping anchor and exploring a cove or island, we lulled and laughed ourselves to sleep while eavesdropping on conversations between wives and lobstermen, summer people and arriving guests, and sailors on cruising boats. For us, it was a time to call my husband to let him know that we were safe, sound, well-fed, and happy. Our conversations were short and sweet, and self-edited. The wonderful woman who so faithfully and respectfully manned the phone line would take our credit card number each June and would remember me every time I asked her to put through a call. On slow evenings, we would chat a bit. I reminisce as I write this and recall my words: “Camden Marine Operator, Camden Marine Operator. This is the vessel Prey. Over.” How foreign it all sounds today. Now, a few boats and a lifetime later, I long for the simplicity of that era.
S.M.Welch Falmouth,Maine
Robb White would have loved this 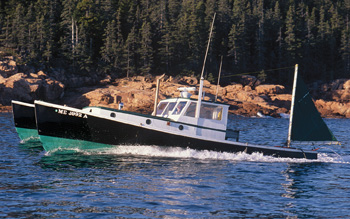 "Double D" 44, photo by Art Paine
My first thought on reading Peter Bass’s piece on the Double Dipper 44 (“Off Off the Drawing Board, MBH&H #94,May 2007) was, “Geez... The poor lobsters don’t stand a chance!” I was at first a little miffed that you would run such an environmentally unconscious story. Then, as I read further, I realized that it had to be an April Fools’Day joke. Surely Syd French is a play on Sidd Finch, the mythical player for the New York Mets made up by George Plimpton (he wouldn’t be a relation of your George Planktinn, now would he?). When I got to the bit about our august Governor, John Baldacci, entering into talks to purchase the Maritime Provinces to support an expanded fishery, I knew I had been bamboozled. I only regret that Robb White isn’t alive to read this piece—he would have enjoyed it immensely. Thanks for the chuckles, and for your great magazine. Maxwell Bright Braintree,Massachusetts, and Northeast Harbor,Maine We got many such comments regarding our article about the “Double D 44” by Peter “Largemouth” Bass in the last issue. The featured lobsterboat was configured as a catamaran, thus allowing two lobstermen to haul traps at the same time at speeds up to 10 knots. Truth or fiction? Our lips are sealed. –Eds. Well worth reading Regarding your review in issue 94,May 2007, “Three Reference Books for Sailors,” I would like to add three favorites of my own: The Craft of Sail, written (and illustrated) several years ago by your illustrator Jan Adkins—hands-down the best introduction to boats and sailing ever published, IMHO. The Oxford Companion to Ships and the Sea, by Peter Kemp—not everything you might need to know, but close to it. For an all-purpose dictionary, the best I’ve come across so far is The Mariner’s Dictionary, by Gershom Bradford. If you should ever review “Reference Books for Canoeists,” I nominate The Wood and Canvas Canoe by Rollin Thurlow and Jerry Stelmok (Stelmok was profiled in the May 2007 issue) and The Bark Canoes and Skin Boats of North America by Howard Chapelle and Edwin Tappan Adney. And if you were to get into “Reference Books for Boatbuilders,” I suggest at the very least Boatbuilding by Chapelle, Building Classic Boats by John Gardner, and Boatbuilding Downeast by Royal Lowell. Novels? Mark me down for The Distant Shore by Jan de Hartog, The Bounty Trilogy by Nordhoff and Hall, and anything by C.S. Forester. Patrick O’Brian? Not on your life.
Eric Greenhut Guilford, Vermont
The Portland issue 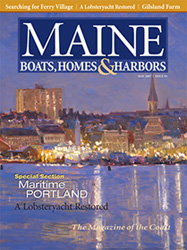 Issue 94, May 2007
Very nice job with your “Maritime Portland” issue (May 2007). I was expecting a chamber of commercestyle “where to eat and what to see” type guide, but was pleasantly surprised at the depth of content you included on what I think is one of the more vibrant small cities around. I particularly enjoyed seeing art on your cover. I had thought that The New Yorker was one of the only magazines left (not including those that deal with art as the main topic, of course) brave enough to use art on its cover.More of that, please! Sondra Mayfair Asheville, North Carolina Great Portland issue (May 2007) you guys just put out. It’s really cool to see how the magazine grows while still keeping its soul. Marly Miner Freeport,Maine