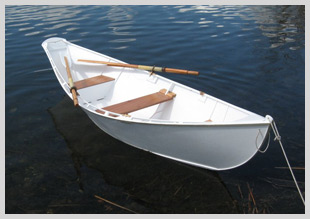 The "legacy dory" built for every grandchild.
Photo by Roy Heberger
The publisher asks an important set of questions all relating to children’s interest in small boats and whether we can do more to cultivate that interest (May 2008 issue, MBH&H # 99). My answer is, yes, and a double yes if the small boats are made of wood. Living in Idaho, I’m “...a beach bum on the desert, a sailor gone off course...” (from a song I wrote lamenting a decision I made to relocate away from big water). Having grown up on the south shore of Lake Ontario, boats were in my life and my blood from my earliest memories, but my children and grandchildren do not have that experience due in part to where they live. I missed the opportunity with my own children to get them into boats, lines, and knots, so for my grandchildren I’m doing something about that. This past winter I built the prototype of what I refer to as a “legacy dory,” which I will build for each of those grand children. Currently, there are three. I want to leave something of me behind so that they know a little of who I was and of my love for boats. My main challenge will not be in the construction of the next in the series, but in how to meaningfully involve each of my grandchildren in the process. If you or your readers have any suggestions, I would benefit greatly from hearing them.
Roy Heberger, Landlocked in Boise, Idaho
Just Do It In response to your request in the May 2008 issue, MBH&H # 99, for thoughts about developing in kids a lifelong love of boats, I believe one good approach is suggested by something we’ve all heard dozens of times from 2-year-olds: “I do it myself, Mommy.” After all, don’t nearly all kids arrive on earth wanting to do it themselves? Isn’t that what most of us want ó to chart our own course in life? Unfortunately, out of the best of intentions, often to protect their kids from harm, too many parents take that most basic and fulfilling of human yearnings away from kids by using the “Don’t” word more often than the encouragement, “Go ahead and try it.” I love boats. I built my first boat when I was 16 (I’m now 63), a canvas-covered wood frame kayak, which I have paddled over the lakes and rivers of Texas, Virginia, and Colorado. It still looks as good and is as strong today as the day I built it, requiring only an occasional refinishing. I think building it was one of the things that instilled the enduring love of boats in me. My recommendation is not to give kids the best sailboat, or rowboat, or kayak you can afford to give them. A parent’s natural desire to give their kids the best is not always the best. Instead, get them involved in creating a boat themselves. Encourage them to build it, or restore it, or even just give it a new coat of paint. Make as much of the process as possible the result of their choices, and their efforts. Of all of the fine and expensive boats that I’ve owned over the years, nothing has ever given me the pleasure of drifting down a beautiful river in the one that I built myself.
Gary Cornwell Beaumont, Texas

the case for “The Basket Case”