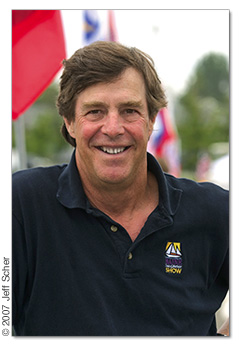 John Hanson, Publisher
Maine Boats, Homes & Harbors
Two artists, two different times, a similar eye for boats. George Wasson was a writer and painter whose work we profile beginning on page 40; photographer Benjamin Mendlowitz lives across the bay from us, and we celebrate the 25th anniversary of his classic Calendar of Wooden Boats in this issue (see page 34). Wasson worked with paint, Mendlowitz works with a camera, but both depict with precision the boats of their time. Actually, their work records the boats of a time that came before theirs. George Wasson's paintings detail the working sail that was the economic engine of the Maine coast since the white man arrived but that was almost archaic by his time (he died in 1932). Mendlowitz photographs lovely wooden boats, craft that many thought were archaic by the time he began to shoot them during the late 1970s. For the most part, Wasson's ships are no more, but the workboats and yachts portrayed by Mendlowitz have been painstakingly preserved or recreated. The work of both men brings the past and the present together into a visual whole. Meanwhile, we bring the most recent past, 2006, into the present, 2007, with our annual Boats of the Year review, which starts on page 47. It profiles an industry that is vibrant and alive and ever-improving in techniques, designs, and execution. May the boats our builders create stand the test of time. P.S. Speaking of standing the test of time, I'm proud to mention that this magazine enters its 20th year of publication in 2007. I started it to help Maine's small companies promote themselves. Little did I know that it would become the source of so many friendships and wonderful stories, all wrapped around the coast of Maine. Thank you to everyone who has participated over the years.

A Letter from the Publisher - Issue 104