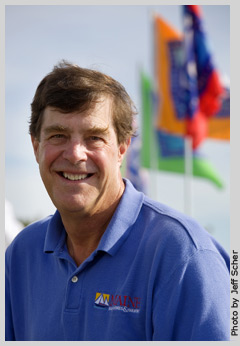 John K. Hanson, Jr., Publisher
Maine, Boats, Homes & Harbors
Camden, Maine: One of the most appealing aspects of life on the coast of Maine is the continuity of our traditions and ways of life. The old ways have not necessarily been thrown out to make room for the new. It’s this heritage of building on the past that helps give Maine its strong sense of place. Those new to the state might wonder, in a paraphrase of a Talking Heads song, “How did I get here? How did I get to this beautiful place?” Our editor, Peter Spectre, beginning in this issue, gives his spin on the answer. His new column, “From Whence We Came,” is a series of short biographies of the men and women whose efforts shaped the traditions of boats, ships, and the sea, as well as life along the coast. I first became interested in publishing such a series when I was reviewing several classified “boats for sale” ads (what a surprise) and realized that I was reading cultural shorthand. I knew the allusions—I knew that “32-foot Constellation sloop, built by Graves” referred to a small fiberglass sailboat of classic lines built by a now-defunct boatbuilder from Marblehead, Massachusetts—but I wondered how many other people did. How many people fresh to the world of boats were able to fathom this haiku-like ad? Knowing just this might not be significant in the greater scheme of things, but it is the small bites of knowledge that, taken together, add up to a full understanding of our cultural history. I’d like to take this concept in other directions, too, and you can help. Is there a piece of land, or an island, or a rock, or some other distinctive geographical site on the coast of Maine that is called something interesting? If so, let us know about it, with the history of how it got its name. We’ll let Peter profile the rock stars; we’ll profile the rocks. Maybe we’ll call it “Here We Is.”