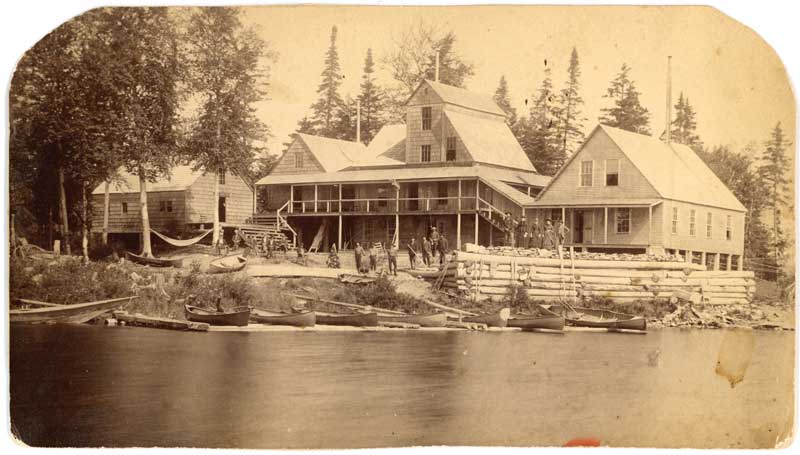 The first version of Camp Caribou floated around Parmachenee Lake. It was later docked on Treats Island and rebuilt. Photo courtesy the Bethel Historical Society

Located deep within the northwest corner of Maine’s vast forestland, Parmachenee Lake is one of the brightest jewels in the crown of lakes and ponds that comprise the state’s Rangeley Lakes Region.

Legend has it that the lake is named after an Abenaki princess. But the Native Americans of the region did not keep written records, and for this reason it is hard to distinguish between fact and fiction when it comes to their legacy. There are a number of tales involving Chief Metallak. He is said to have lived to be 120 years old, and, according to legend, Metallak named Parmachenee Lake after his only daughter. It has been documented that on many occasions, the kindly Abenaki assisted early settlers, hunters, and trappers. Many of them counted Metallak as a loyal friend, including Enoch Lincoln, governor of Maine from 1827-1829.

Crossing through the mountains forming the boundary between Quebec and Maine, the Magalloway River snakes its way through bog, meadow, and wood for nearly three miles before its serpentine course slips into Parmachenee Lake, not far above Indian Cove.

Although he was not the first white man to venture into the region, John Danforth will be forever linked to the Parmachenee tract. While still a young man, he and his friend, Fred Barker, spent the winter of 1876 hunting and trapping in what at the time was wilderness. They later wrote a book about their adventures, titled Hunting and Trapping on the Upper Magalloway River and Parmachenee Lake: A Winter in the Wilderness.

Having explored the lake and the forested hills surrounding it, Danforth soon created a thriving business guiding sports from as far away as Boston, Hartford, and New York City. He had hoped to build a sporting lodge, but was stymied by a land dispute. Not to be outdone by his competitors, Danforth constructed a floating lodge that could be moved about the lake and along the river. The lodge was christened Camp Caribou when a sport shot one of the animals, which were plentiful during the 1800s. At some point, the legal issues that plagued Danforth were resolved, and he received permission to build a sporting camp on Treats Island, located near the middle of Parmachenee Lake, where he docked his floating lodge. 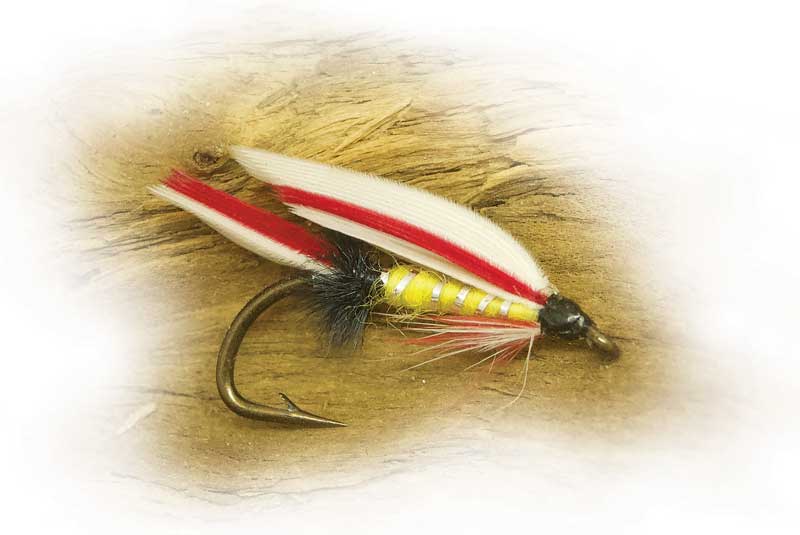 The design of the Parmachenee Belle is attributed to avid fisherman, Henry P. Wells. Intended to mimic the fin of a brook trout, it remains popular with anglers throughout Maine. This version was tied by professional fly-tyer Selene Dumaine-Frohmberg. Photo by Selene Dumaine-Frohmberg A fly pattern known as the Parmachenee Belle is attributed to John Danforth’s good friend, fishing companion, and New York attorney, Henry P. Wells. This wet fly is said to imitate the fin of a brook trout. Meant to tempt the larger trout that are known to stalk smaller fish, it continues to be cast by anglers throughout Maine.

In 1890, a number of wealthy sports, including Wells, formed the Parmachenee Club, with their headquarters in New York City and their clubhouse at Camp Caribou. Shortly thereafter, the members bought out Danforth’s interest. While Danforth remained as manager, Treats Island became known as the Parmachenee Club.

By World War II, the large corporations that owned much of Maine’s forestland were constructing dirt roads to allow logging trucks access to the abundant timber in the northern parts of the state. At the same time, gates went up preventing use of these roads by the general public. Over time, many of these gates were removed. But those barring vehicles to Parmachenee Lake and the upper portion of the Magalloway River remain. As a result, even those living in the nearby towns of Wilsons Mills and Rangeley speak about this semi-wilderness in hushed tones. Many of them have never ventured behind the gates. 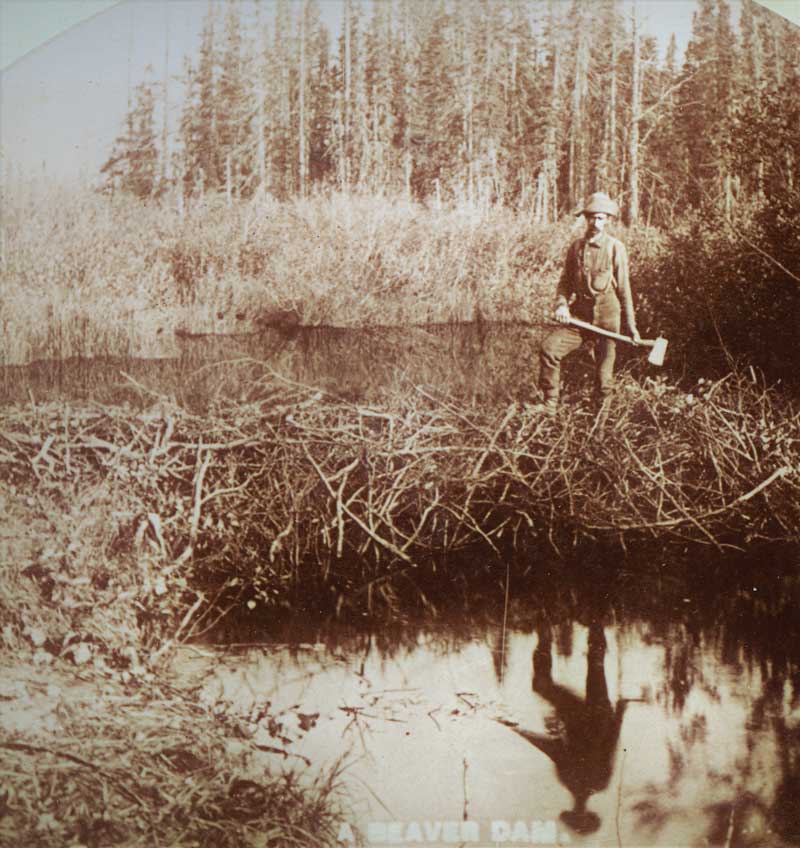 John Danforth (shown here) and his friend, Fred Barker, spent the winter of 1876 in Maine. Their book Hunting and Trapping on the Upper Magalloway River and Parmachenee Lake: A Winter in the Wilderness helped promote the region. Danforth became a guide and later started a hunting and fishing lodge. Photo courtesy Rangeley Lakes Region Historical Society

Although landlocked salmon were introduced in the late 1800s, the region’s native brook trout have called Parmachenee Lake home since before the first Abenaki paddled their birch bark canoes across its sparkling waters. Restricted access and a catch-and-release philosophy have resulted in a superb fishery. Native brook trout exceeding 20 inches are not uncommon, and in spring and fall, trout and salmon can be found in the river above and below the lake.

At the southeast corner of Parmachenee Lake, the Magalloway River reemerges as a wide, slow-moving stream. A cabin is maintained by the warden’s service beside Black Cat Brook, a streamlet that enters the river within view of what had once been a wooden dam.

More than 30 years ago, I watched my wife battle her first landlocked salmon in a pool below the stone cribwork that once formed the foundation for the dam. The fish danced upon its tail while leaping a number of times before coming to the net. 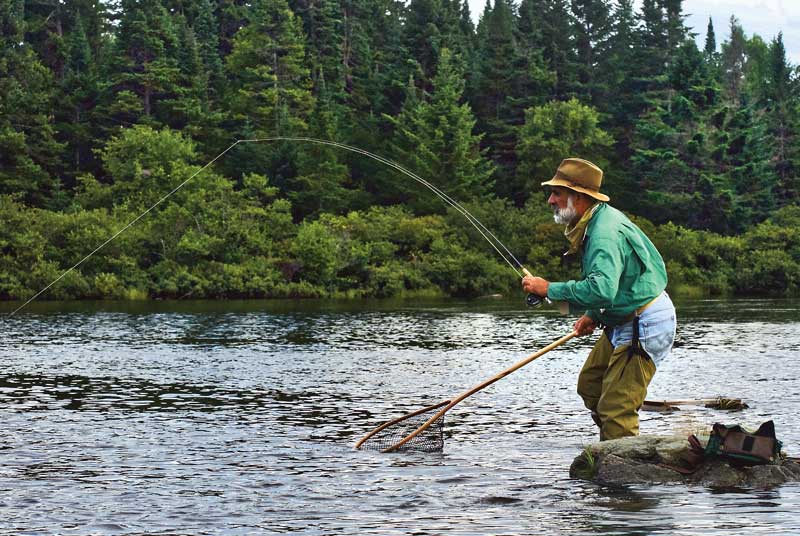 The author fighting a Magalloway trout. Photo by Trish Romano

That was about the time my wife and I became friends with Master Maine Guide, Tom Rideout. Following in the sporting tradition established by men like John Danforth, Rideout has hunted, trapped, and fished the Parmachenee tract since he was a young boy. Like the legendary guides of old, he enjoyed then, as he does now, entertaining his sports with tales about the region.

Over dinner one night, Rideout explained that the wooden dam had been built in the early part of the 1900s to replace a more primitive structure. He described how the dam held back water at the top of the ravine. Each spring the water was released to float logs that had been cut during the winter from Parmachenee Lake down over boulders in the Magalloway for more than two miles before entering the top of Aziscohos Lake. From there, the logs would be chained and pulled by steamboat down to the concrete dam at the bottom of the larger lake. There, water would once again be released to float the timber over the final stretch of the Magalloway River, eventually to reach its final destination—the paper mills built along the banks of the Androscoggin River. 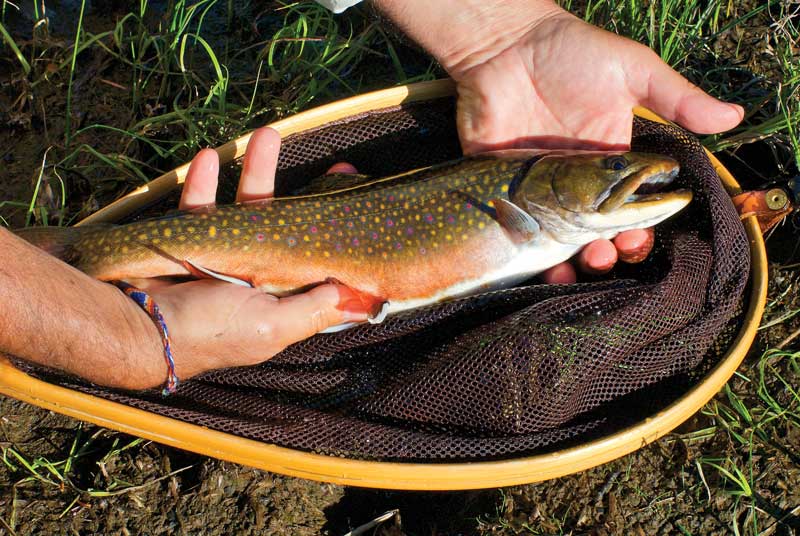 The author prepares to return a brook trout to the upper Magalloway River. Photo by Trish Romano

Named after the man who conceived it, Keenan Dam was also a bridge over two spillways. A gravel road stretched down from one bank of the river to the other, enabling trucks to cross. Rideout recounted how a number of loggers lost their lives in accidents as their trucks navigated the steep grade leading down to the bridge. This caused Jim Keenan to insist that the road be diverted to a safer crossing.

While paddling a canoe across Parmachenee Lake, you’ll discover that little has changed since young John Danforth spent a winter trapping and hunting the forest surrounding the lake named after an Abenaki princess. Passing by Treats Island, you can view the cabins that once housed Henry Wells and his wealthy friends. If you look closely you may even spy a ghostly apparition waving back at you. Passing through Indian Cove, you might spot a moose or two and while wading the deeper pools and runs found along the upper stretches of the Magalloway River, you’ll have the chance to hook a salmon willing to dance on its tail upon the prick of your hook. And just maybe, when the breeze sweeps along the shoreline or a loon cries out as the sun goes down, you may turn to find Chief Metallak smiling back at you.