A celebration of community and summer 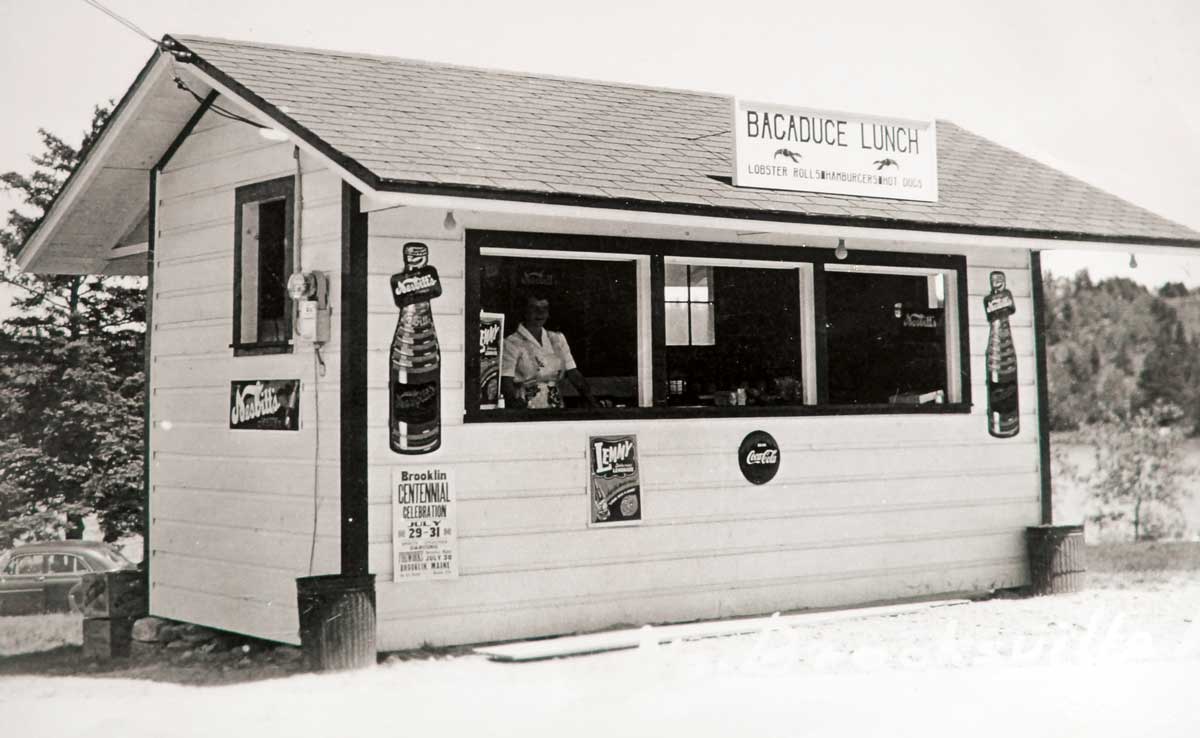 Still family-owned, the Bagaduce Lunch opened in 1946 and has been going strong ever since. The building, shown here in 1956, has changed little. Image courtesy Berwyn Peasley

It’s opening day at the Bagaduce Lunch—an annual celebration and a sure sign of spring, even though there’s still a chill in the air. The Bagaduce Lunch sits on a slight rise at the Reversing Falls Bridge on the Brooksville/Sedgwick line, with one of the best views of the Bagaduce River. A white building with red trim, it is Motif No. 1 for artists on the Blue Hill Peninsula.

Cars are parked every which way along the grass and down the drive. This is where you come to see the neighbors you haven’t seen all winter, and the folks from across the river you haven’t laid eyes on since fall. My husband sees someone from the boatyard and finds out that a loose electrical connection is to blame for the problem with the lights on his boat.

There’s free ice cream today. My neighbor tells me his daughter got the school bus to stop on the way home and everyone had ice cream, even the bus driver.

The line at the food window is even longer than at the ice cream window. That’s because the food is great, especially the fried clams. The food attracts one and all. One summer, as I stood at the window ordering, I saw a silver Rolls Royce parked next to the water. An exquisitely dressed, snowy-haired man, and his chauffeur, in full livery, sat across the picnic table from each other enjoying their clams.

Summer hasn’t arrived yet, however. Today’s traffic consists mostly of pick-ups—big, shiny ones, rusted-out ones. There isn’t an out-of-state license plate in sight.

In years past, opening day was announced on a sheet of plywood leaned against a telephone pole, the date painted roughly in black. This year, the message went out by word of mouth. There’s a certain satisfaction in being part of the “in” crowd. I have a connection. Most of the people on the road where I live are relatives of the couple who opened the Bagaduce Lunch three generations ago.

The people behind the window know everyone. There’s lots of chatter across the counter, shared reports of the past winter and plans for the summer. A woman pulls in and parks in front. While a couple of kids pile out, she leans into the back seat and unhinges a tiny bundle from the car seat. Wrapped in layers of blankets is a newborn, a week old at most, with a full head of black hair. The mother swaddles him tighter and passes him through the window to the Bagaduce Lunch owner. The siblings shout, “We’re giving him away.” But after a good long cuddle, the baby gets passed back out through the window.

We order and get our number: 8. Number 36 is just coming out. How the number system works is a mystery. What we do know is that our number will be called over the loudspeaker, and that we have time to walk to the end of the grass pier beforehand.

A mastiff dog, his huge, handsome head hanging out the window of one of the shiny pick-ups, snuffles the fryolator-scented air, savoring the aroma. The owner of one of the rusted-out pick-ups cranks his engine in vain, then climbs out of the cab and grabs a hammer from the truck bed. He climbs underneath and whacks at something. When he gets back in the cab, the truck starts right up. “It’s that fuel pump every time,” he yells out the window as he drives away.

A passel of kids tumble in the grass. Then they right themselves like tippy toys and run along the water, throwing big rocks, and watching them splash.

As we walk back from the pier, we spot a picnic table lit by the evening sun. It might just be warm enough to sit and eat there.

Number 36 is still sitting on the counter outside the window. The order, topped with a pile of crisp golden onion rings is getting cold. The owners are caught up in conversation down by the water, children swirling around them.

As we wait, we watch the sun fade from our chosen picnic table. People zip up jackets and stick hands in pockets. Then it’s our turn. The loudspeaker announces it: “Number 8.” Our order arrives, the clams still sizzling from the fryolator. We head for the warmth of the car, where we balance the tray across the console. As we lick the last crumbs from our fingers, the ice cream window closes and the couple walks up from the waterside and claims Number 36.

Charlotte Crowder lives and writes on the coast of Maine. She is a medical writer and editor by day. In addition to Maine Boats, Homes & Harbors, her short stories have also been published in The Maine Review and the Boston Literary Magazine.