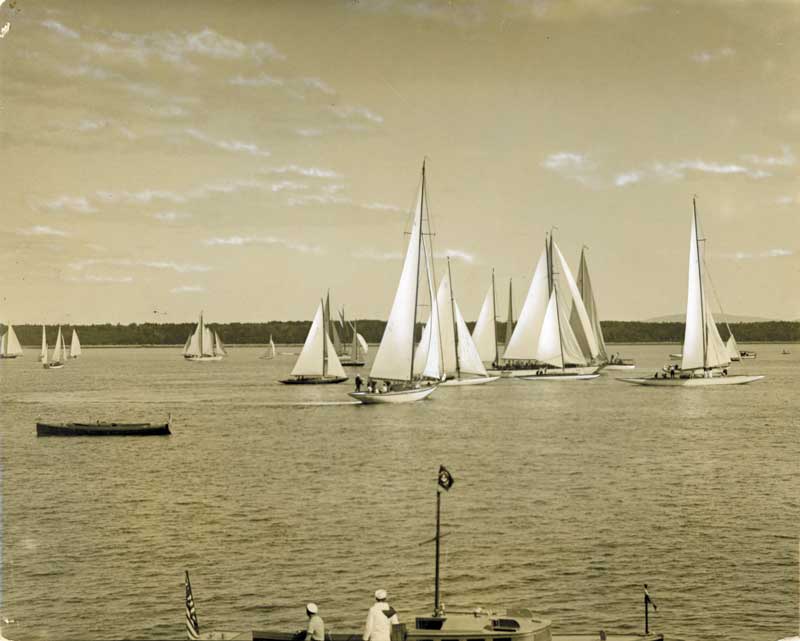 The historian lives for the unexpected discovery. In researching the history of sailing on Frenchman Bay, just east of Mount Desert Island, I came across a perfectly preserved gem, a 1903 club book for something called the Mount Desert Yacht Racing Association. The burgee on the cover clearly belonged to the Bar Harbor Yacht Club, founded in 1885. What was going on here? I wondered. 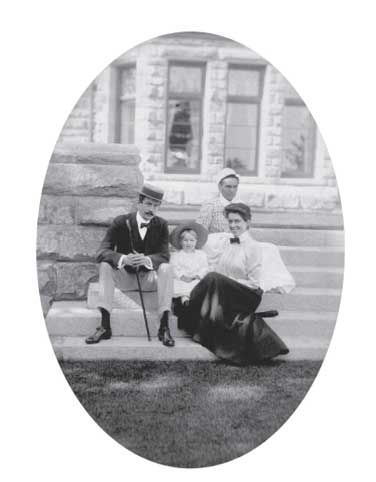 Edgar Scott and his family in front of their summer home in Bar Harbor. It turns out that the life of this organization, while a relatively short 24 years, was energized by a fascinating group of yachtsmen—and women—who brought some of the most beautiful racing one-designs ever produced to Mount Desert Island. There were boats by George Lawley, B.B. Crowninshield, Edwin Boardman, and especially Nathanael Herreshoff, including the famous Bar Harbor 31s and S-Class sloops.

In the end, the Racing Association handed its burgee over to the Bar Harbor Yacht Club, after having survived World War I and the passing of many of its original members. Two of these members were father and son: Edgar Thomson Scott, born in Philadelphia in 1871, and his son, Warwick Potter Scott, born in 1901. Their lives in themselves were fascinating, both lost in the respective World Wars. They were excellent sailors, Edgar in his Bar Harbor 31 Bat and Warwick in his S-Boat Artemis. In effect, they bookend an important and formative era of competitive one-design racing in one of the country’s most beautiful settings.

This mélange of “Twenty-five Footers” provided for spirited competition, if not strictly by the one-design standards of today. It also got the attention of their designers. As reported in the July 20, 1902, New York Times, “In other seasons Bar Harbor has had yachts and yacht racing, but the present summer gives promise of a development in that line of sport that is unlike anything that has been had here before. The greatest enthusiasm is being shown for the new class of knockabouts that have been brought here this summer. The designers are Crowninshield, Herreshoff, Lawley, and Crane, and so pointed is the feeling over the superiority of the various boats that Crowninshield and Herreshoff are coming down here to sail their models.” 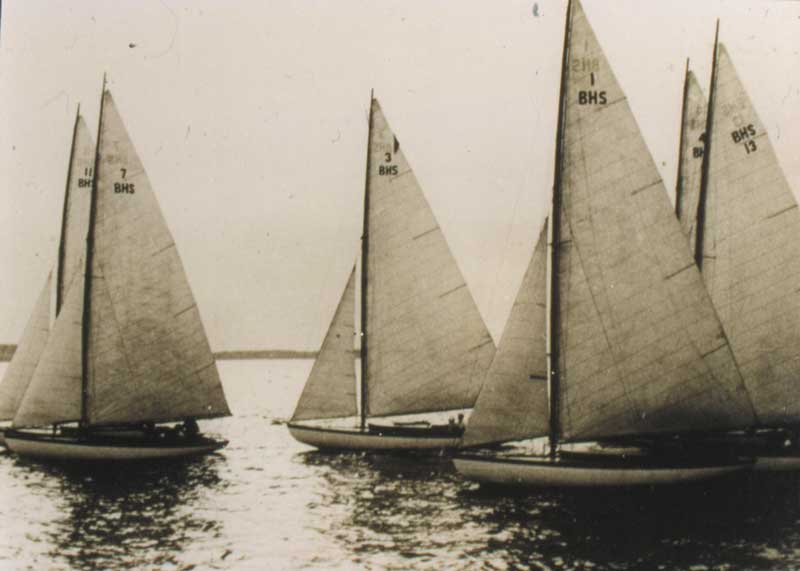 The Mount Desert Yacht Racing Association was a wealthy, and, one suspects, powerful ensemble. “Definite formation of the association was decided upon at a meeting held Sunday night at Chiltern, Edgar Scott’s house,” according to a 1900 report. Members by 1903 numbered 23 and included surnames such as Cassatt, Thorndike, Macy, Morrell, Newbold, Fabbri, Ladd, Sears, Eno, and Gallatin. Scott was the commodore, and they knew how to sail. Their Racing Rules, published in the club book, were sophisticated and highly specific, compatible with the New York Yacht Club. The 1903 rulebook includes RULE XXVI, classification, as a 31-foot one-design class, manufacturer not stated.

Had there been a contest among rival designers, the clear winner would have been Nathanael Herreshoff. In the early summer of 1903, nine of his Bar Harbor 31 Class sloops appeared in Frenchman Bay. This was a major leap forward for the Mount Desert Yacht Racing Association. The boats were larger, with a return to the bowsprit that was eliminated in knockabout design. They carried more canvas and were faster, and the courses in Frenchman Bay were expanded accordingly. They would dominate racing for the next four summers. Then came a precipitous decline with the death of A.J. Cassatt just after Christmas of 1906. The subsequent disappearance of the 31s was stunning and reflected the often-ephemeral fortunes of sailing programs and clubs, dependent as they were on a relatively small group of people. 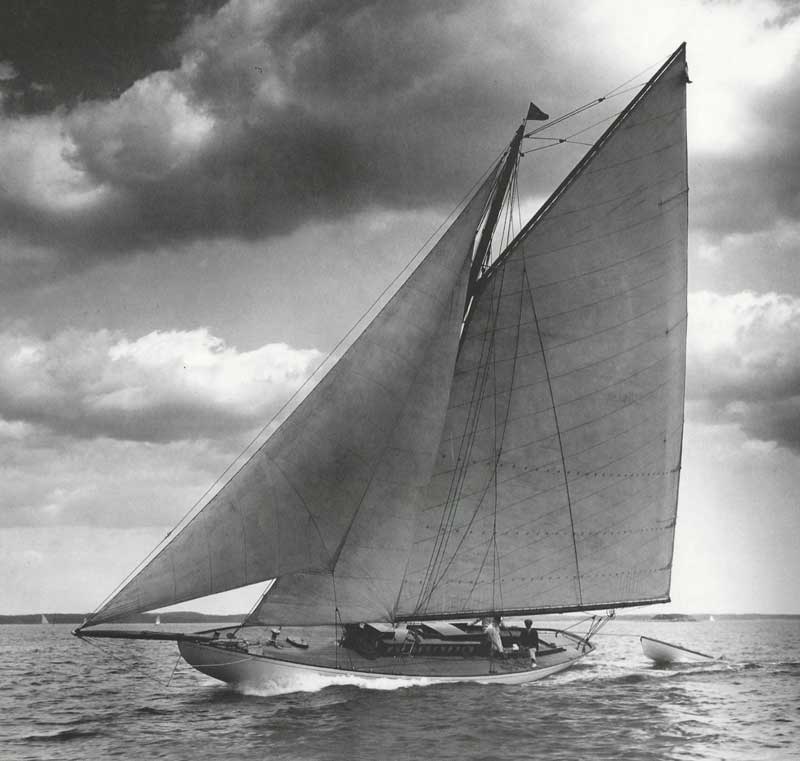 The 1903 Herreshoff-designed Bar Harbor 31 Joker, shown here in her heyday, now belongs to Alec Brainerd of Artisan Boatworks who hopes to restore the boat for a new owner. Courtesy MIT Hart Nautical Collection

Undeterred, the association introduced yet another design in 1907, an eighteen footer from the E.A. Boardman firm of Boston. The intent was “to confine the handling of the boats to amateurs and no professionals are allowed aboard during the races,” according to the rules. These “Bar Harbor 18s”, numbering six, were a decided return to the knockabout design, 18 feet on the waterline and 31 feet overall. Built to strict one-design standards, they “are intended to be as fast all-round boats as can be turned out under the excellent restrictions of the Mount Desert Yacht Racing Association,” the rules stated.

Alas, this design failed to generate interest. Scott, perennial enthusiast and sailing winner, turned to powerboating. It would remain for another Scott to revive competitive sailing in Frenchman Bay. But first he had to grow up.

The year 1913 is notable for the arrival of the first wave of Crowninshield’s Manchester 17-footers in Bar Harbor. The July 28 Bar Harbor Record noted: “The MDYRA has again been restored after several years of inactivity and under its auspices Bar Harbor will a enjoy a series of ten races this summer… six 17-foot waterline knockabouts will compete for honors and the season cup offered by the association. Pennants are given the winner of each race. The first went to Warwick Scott’s Snooks in the race of July 12.” 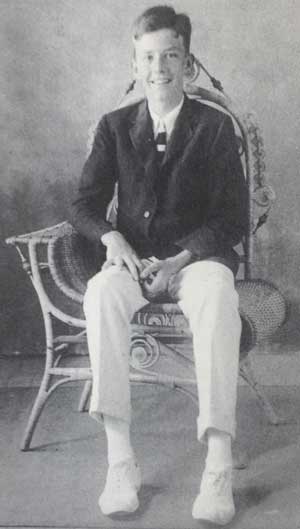 Warwick Scott as a young boy in Bar Harbor. Image courtesy Warwick Wheeler In 1913, Warwick Scott, second son of Edgar T., was all of 12 years old. During the coming years, his influence would become a driving force in the restoration of the racing tradition to Frenchman Bay, the Mount Desert Yacht Racing Association, and the Bar Harbor Yacht Club. By 1940 he would be the club’s commodore. Meanwhile, World War I brought profound changes to local yachting activities and to the Scott family. Edgar T. would die in that conflict. But by 1920, Warwick was off and running. The September 8, 1920, Bar Harbor Record ends a column somewhat cryptically: “Mr. Scott and a dozen other yachtsmen are considering building a new class for next season and although they do not hope for such a fine class as the old Bar Harbor Thirties, some fine racing is anticipated.”

World War I dealt a terrible blow to sailing virtually everywhere. In addition, other forces were at play on Mount Desert Island. By the early 1920s, many of the Bar Harbor old guard were gone and the highly social summer contingent had begun moving over to Seal Harbor and Northeast Harbor. Indeed, 1923 marked the formation of both the Seal Harbor Yacht Club and Northeast Harbor Fleet, the latter having acquired a number of Crowninshield Manchester 17s (B Boats) as well as the lion’s share of Boardman’s very similar Marblehead 17s (A Boat).

Across Frenchman Bay, Winter Harbor and Sorrento had begun to flex their muscle. And the Mount Desert Yacht Racing Association was officially dead, as the Bar Harbor Yacht Club asserted itself as the leader of Frenchman Bay racing. 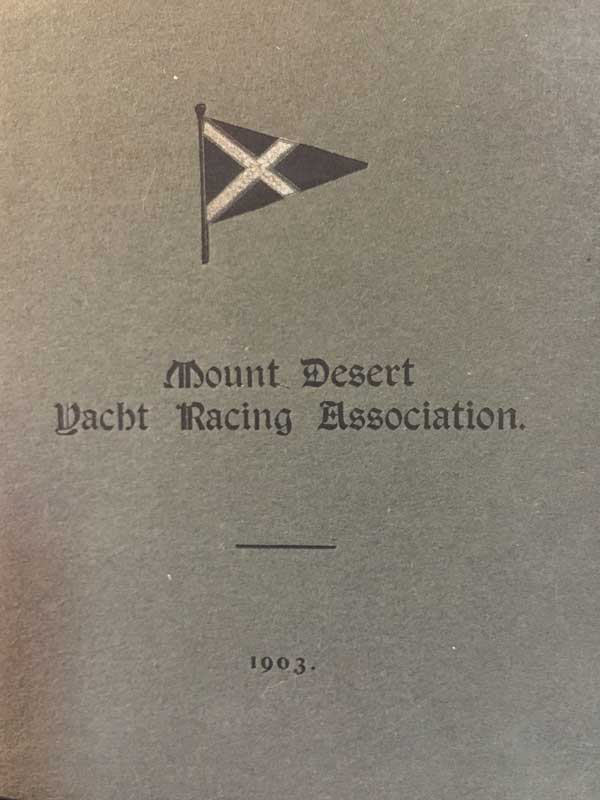 The Mount Desert Yacht Racing book, courtesy of Chapman Law Firm Collection. In 1924, 15 high-sided 22' sloops, designed by Ralph E. Winslow and underwritten by Edsel B. Ford, arrived on the scene. The new Mount Desert Island Class was designed with the safety of young fledgling sailors in mind as the new boats raced with a paid hand aboard. This was an unpopular addition from the viewpoint of the skippers, according to an account by historian Sturgis Haskins. “Usually...(the boats) just bobbed up and down safely, while other boats knifed ahead and left them far behind,” Haskins wrote.

Enter Herreshoff’s S Class sloop. First built in 1919, the S Class featured a huge Marconi main supported on an elegantly tapered and curved spruce mast, and a diminutive self-tending jib. By 1926, BHYC members had bought 17 of these beautiful racing sloops and by doing so, introduced more than a decade of spirited, interclub racing in Frenchman Bay. Much of the credit for this revival goes to Warwick Scott, who by 1940 became commodore of the BHYC, himself a winning helmsman in his Artemis.

Then another war intervened and took with it the wind from Mount Desert Island’s sails and the life of young Warwick Scott. He had joined the Navy as a lieutenant, was stationed and ultimately captured at Corregidor. As a POW, he was being transported to a Japanese prison when U.S. planes mistakenly bombed the ship. 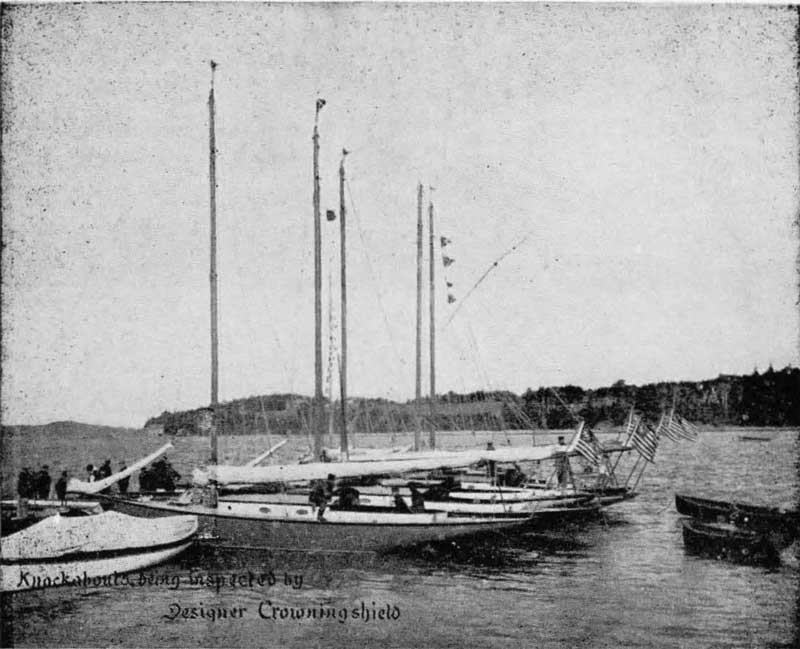 This circa 1900 photo, published in an early guide to Bar Harbor, shows the fleet of Bar Harbor Restricted Class Knockabouts, designed by B.B. Crowninshield. They were 25' on the water, 41' overall.

What our organizations, our boats, and we have in common is mortality. Some boats, such as Herreshoff’s S Class, do better than we do. Fully half of the original builds are sailing and racing today. Many yacht clubs and fleets, maintained lovingly by generations of sailors, transcend time in the human context. And some of these organizations contain the vital memories. The Mount Desert Yacht Racing Association was one of them.

Bill Horner grew up on MDI and practiced general surgery for 38 years. Since retiring in 2007, he has immersed himself in local and regional history, presided over the MDI Historical Society, and founded the History Trust.