Winter Days in the Maine Woods 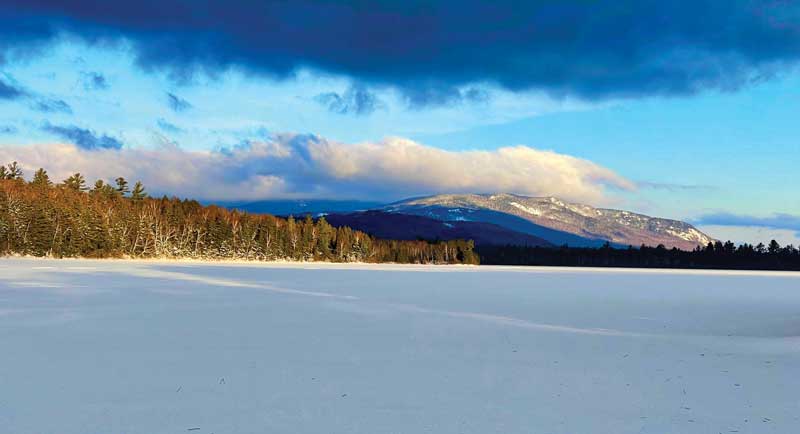 In late December 2012, I barreled through six inches of snow in my Toyota Tundra over 16 miles of logging roads in Maine’s western mountains to my log cabin on the shores of Spencer Lake. In most winters with normal snow depths, the cabin would be inaccessible by truck. Days earlier, at home in Orono, I closely monitored weather forecasts for signs of snowstorms. With light snow squalls in sight, but no storms, I rolled the dice, packed for the weekend, and drove to Spencer Lake. Forecasts proved accurate. The final eight miles were marked by bands of snow squalls alternating with bright sunshine—typical early winter weather in northern Somerset County.

The remote cabin, built by lumberjacks before WWI, has been my favorite retreat since 1967. Arriving late in the afternoon, I quickly unpacked, started a fire in the antique wood cookstove, and then scrambled to the lake at sunset to chop a hole in 12 inches of ice. Polaris, the North Star and the brightest star in the constellation Ursa Minor, was visible by the time my axe and pinch bar broke through. Exhausted and exhilarated, I carried two galvanized pails of water to the kitchen. Settling into a rocking chair, I read This House of Sky by Ivan Doig as a pot of venison stew simmered on the woodstove next to rising buttermilk biscuits in a cast-iron skillet. 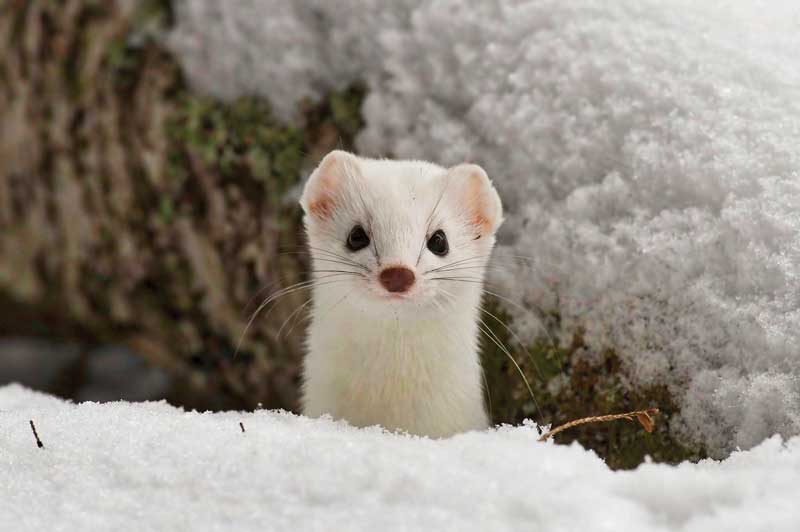 Ermines have a very high metabolism, requiring them to eat two-thirds of their body weight daily. Photo courtesy Pam Wells

During the night, I slept soundly inside a 1978 L.L. Bean Snow Lion sleeping bag tucked inside a summer bag. But I’d neglected to awaken every two hours to add firewood to the stove, and by morning, it was zero degrees inside the cabin and minus ten outside. Both pails of water were frozen solid atop the wood stove.

Dressed in long johns, a wool stocking hat, and wool socks, I raced to fill the stove’s small firebox with birch bark, cedar kindling, and rock maple, which ignited with the flick of a wooden match. Obscured by my own cloudy breath, I could barely see my hands rubbing inches above the warming stove. I soon discovered, though, that I was not alone. Rustling sounds—ones I’d heard during the night and dismissed as mice—once again came from a firewood box behind the stove. Up popped an ermine, also known in summer as a short-tailed weasel. In warmer months it sports a light-brown coat with a cream-colored chest and belly. That morning, his bright white winter coat stood in stark contrast to the seasoned slabs of stove-length yellow birch and rock maple. Ermines, I’ve learned over the years, are a camp owner’s best friend, because they’re deadly mousers. And this little guy, which I named Whitey, was wonderful company throughout the weekend. I may have been his first human sighting, because he had no fear of me. Interestingly, a lack of fear of people is a common trait among several other North Woods animals, particularly spruce grouse, Canada jay, young moose, and Canada lynx.

Whitey readily helped me with my morning meal of leftover venison stew, scrambled eggs, and bacon. He was very intrigued by my purple grapes, rolling each one across the kitchen floor before attacking it, like a house cat pouncing on a catnip-scented stuffed mouse. When Whitey grew bored, he gathered the grapes, one by one, and exited the cabin through a gap between the floorboards and the west wall. As I watched through the cabin’s back window, he cached the grapes beneath a wood pile, likely where he also stored frozen mice and voles—his go-to meals when rodent hunting was unproductive. Winter caches are a common trait among Maine predators when food supplies wax and wane. 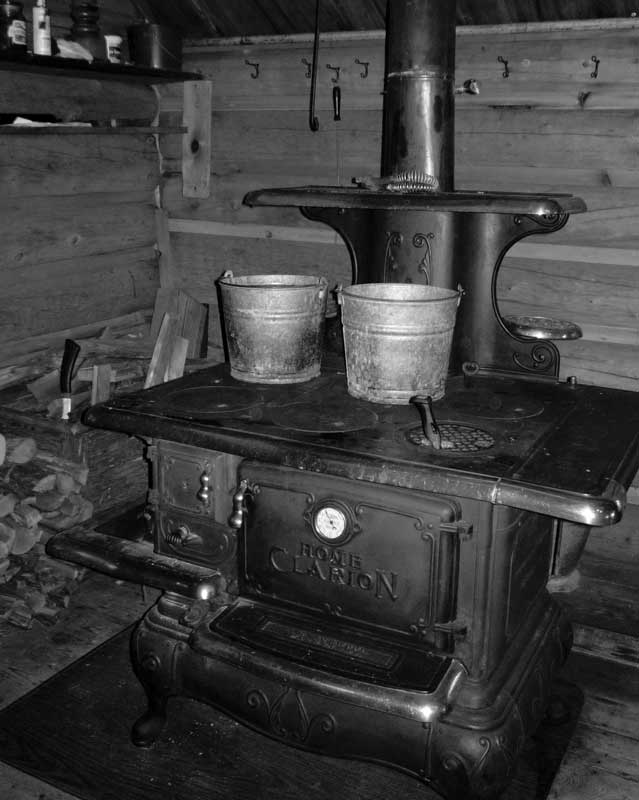 The author spied “Whitey” hunting for the mice wintering in the woodbox to the left of the cookstove. Photo by Ron Joseph Standing next to the warmth of the stove, I dressed in wool pants and a wool coat, added more wood to the fire, and stepped outside in insulated Sorel boots. I left Whitey in charge of the cabin while I searched for animal tracks. The previous day’s snow squalls had delivered a dusting of fresh snow—ideal conditions for locating and identifying animal tracks.

In a cove about a mile south of the cabin, a straight line of round bobcat tracks drew my attention. The large tracks were made by a tom, and I followed him a mile or so through a mixed forest of tall hardwoods and softwoods. In less than an hour I found his food cache—a recently killed yearling deer—in a dense stand of northern white cedar. He had completely covered the deer with snow, except for a hind hoof.

I backtracked to stitch together the story of the tom’s successful hunt. Distracted by a winter wonderland and a dozen pine grosbeaks eating red mountain ash berries, I had overlooked the tom’s full body impression in the snow, where he had crouched low to conceal himself before creeping to within 30 feet of a bedded deer. An explosion of snow revealed where he had sprinted and attacked the deer. Death comes quickly when a windpipe is crushed in a wildcat’s powerful jaws. And like Whitey, who had stored grapes and chicken scraps in his cache hours earlier, the bobcat had gorged himself on venison and cached the remains. In winter, bobcats rely heavily on deer when a blanket of snow makes snowshoe hares difficult to capture. A 30- to 40-pound tom can kill a 120-pound deer.

For bobcats, covering a deer carcass delays its discovery by soaring ravens. When ravens eye a deer carcass, their squawks attract other ravens to the cache. Sharing food resources benefits the flock. Their raucous calls, however, also attract the attention of coyotes, which can consume a cached deer in a few days. Suspecting the tom was camped out near his food bonanza, I continued following his tracks to where they abruptly ended at the base of a tall cedar, looked up, and immediately spotted him. Satiated, he was outstretched on a limb, digesting his meal, and keenly looking back at me. I quickly retreated and bushwhacked a different route back to the log cabin.

In a dense stand of regenerating bigtooth aspen and balsam fir, I observed a network of snowshoe hare tracks, often described as a “rabbit run” by biologists and hunters. The hare tracks were intermingled with tracks of marten and fisher—formidable rabbit predators.

The dusting of snow offered one final gift on a logging road less than 500 feet from my cabin: during the night while Whitey noisily rummaged in the wood box, a Canada lynx had crossed the road, leaving beautifully distinct footprints in the snow. His front foot measured 6 inches in width; his hindfoot measured 8 inches in length. On average, lynx weigh about 24 pounds. Their feet, enormous relative to body size, act as snowshoes, allowing them to “float” atop snow without sinking—a remarkable adaptation for life in the boreal forest where deep snows can persist five to six months each winter.

Shortly before sunset, I shot a ruffed grouse and sauteed it for dinner. Whitey relished its legs, neck and head before stashing the carcass behind the cabin.

The following afternoon, as I finished packing my truck for the return trip home, Whitey emerged from the snow-covered woodpile with a limp white-footed mouse in his jaws. He paused just long enough for our eyes to meet before disappearing under the cabin. At the risk of being anthropomorphic, I’d like to think he was saying goodbye. It’s more likely, though, that he was bidding me good riddance. The cabin and its wood box would be his alone until my next visit, on Memorial Day weekend.