By Rob McCall
“The snowy trees were everywhere bent into the path like bows, tautly strung, and you had only to shake them with your hand or foot, when they rose up and made way for you. Ever and anon, the wind shook down a shower from high trees.”
—H.D. Thoreau’s journal, January 19, 1855

On a clear, cold January morning with the temperature hovering around zero degrees Fahrenheit, it’s as if the very air is frozen into an iron silence that will hardly allow the most familiar sounds—the calling of crows, the barking of the neighbor’s dog—to pass through the crystalline distance to our ears. Like an icebreaker pushing its way up the frozen Penobscot River, sounds cannot make it through the chill without an extra effort on such a day.

A little snow cover can make a big difference in winter. It dramatically changes the light for one thing. The dark ground turns white, then takes the slightest bit of light and enhances and amplifies it, and adds sparkle and twinkle, too, shining it back up at us, warming our faces and making our eyes water. As meager as the sunlight is these January days, a snow cover can make it bright as summer. It reflects the sun into the shadowy places under the trees and brightens their lower branches. It illuminates the gliding gulls from below so that they glow against a bright blue sky like ethereal beings. Snow puts everything in a whole new light. 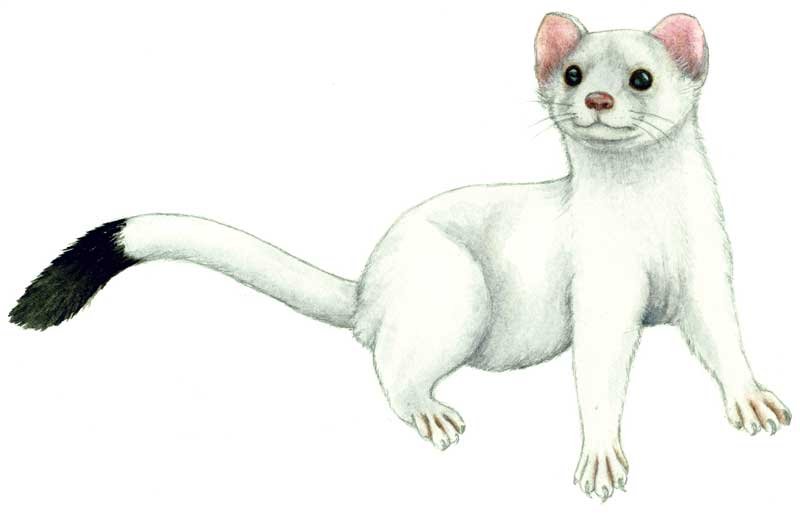 One bitterly cold and windy morning last week, I saw a flash of white in motion outside the big window in the bedroom. I stopped and it stopped, and to quote Annie Dillard, “our eyes locked, and someone threw away the key.” It was a weasel, bedecked in white, and hungry—a beautiful creature. I called for my wife, Rebecca, who came quickly and saw her first ermine ever. It soon scampered away, probably hunting for that little red squirrel that comes by several times a day. It was all white in its winter coat with a black tip on its tail. Last time I saw one was many years ago coming down the mountain. I called our neighbors immediately thinking of their hens. Weasels can raise holy h-e-ll in a henhouse, killing more than they eat. I imagine when a hungry weasel finds a henhouse it might feel a bit like a poor man finding a satchel of cash. But our neighbors know all about weasels and are prepared for them.

Another wintry day, walking along the road with the bay on one side and the snow-covered fire pond on the other, I saw a curious sight on the surface of the pond. The road goes over a small dam that holds the pond back from the bay and the bay from the pond. Leading away over the snow-covered ice from a patch of open water was a trail that looked as though it might have been made by a sea serpent, a smooth, curving trench with little walls of snow pushed up on either side. Going closer I saw a few footprints on either side of the trail. This was puzzling, but it dawned on me. This trail was made by playful North American otters (Lontra canadensis) who like to slide on their bellies on ice, snow, or mud, and may go hundreds of yards this way for the pure joy of it. No wonder their trails look like a bobsled run; they were bob-sledding long before bobsleds were invented.

Climbing Blue Hill’s “smally misty mountain” this time of year is a whole new adventure, but it can be a disaster if one is not well-prepared. Ice spikes and a hiking stick with a sharp point are basic, because during a typical freeze/thaw winter the trails become rivers of ice. A few snacks and a water bottle are smart, too. So is—and it pains me to say this—a cell phone.

The Osgood trail up Awanadjo is an old road that goes down through the woods to Main Street in the village. In former times rusticators could take a carriage ride all the way to the summit to enjoy the view. The 1947 fire tower was built and maintained via that road, with Dodge power-wagons being the chosen vehicle for the job. In the 1980s all-terrain vehicles proliferated and erosion became a serious problem, so the trail was rerouted and greatly improved, and ATV traffic is now by permission only. Come to think of it, we haven’t seen a horse-drawn carriage up there in years, either.

Down on the mud-flats, herring gulls and black-backs poke around in the rockweed looking to fill up on clams, mussels, periwinkles, carnivorous snails, and whelks before the ice creeps back in, as it soon will when the thaw is over. We’re all getting into this cold weather rhythm together.

Meanwhile, we think of people coming from away to the Maine coast in the summer to enjoy the abundant fresh seafood and the breathtaking scenery as a fairly recent phenomenon, say, since the late 19th century. But archaeological evidence shows that this very thing has been going on for thousands of years. According to Arthur Speiss of the University of Maine, there are some 2,000 shell heaps along the coast made up largely of oyster and clam shells piled by ancient people who probably summered at the shore, including at the reversing falls in Pembroke, Hancock and Blue Hill, and the Whaleback midden in Damariscotta. That’s a lot of clambakes.

One of the royal joys of February is a certified, full-blown, star-studded, rock-ribbed, big-old blizzard like the one we had last week. The sky turned dark. Winds rattled the windows, moaned in the gaps, and chuffed in the chimneys. Fine-grained sugar snow swirled and spun outside like bed sheets in the dryer. All day it went. Drifts piled up downwind of the house, the barn, the woodshed, and the woods. We haven’t seen the like in a long time around here. The next day the sun shone from a cloudless cerulean sky, like the shiny silver setting for a flawless diamond, and set the whole world a-dazzle. Glorious!

We are seeing snow buntings in our area, a welcome winter visitor from the tundra, thriving in snow and cold. Woodpeckers tap out their woodland telegraph on warmer days. Our usual stalwart flocks of crows, chickadees, starlings, and herring gulls make their regular visits at feeding time, keeping us company through the cold months.

Hardwood trees may look as good as dead in the depths of winter, with their leaves gone and their buds tightly covered, but they are only sleeping, and can be stirred from their slumber at any time by sufficient warmth and moisture. Their constricted arteries will relax a little, the cellular pumps in their roots will start up again and the sap will rise from root to branch to twig until the buds start to swell and show a little green. If the cold returns, they’ll close their buds, return their sap below ground, and go back to sleep again until one fine day when winter will be over at last.

In the spring of 1845, Sir John Franklin led an expedition of 129 men and two ships to find the Northwest Passage from the Atlantic to the Pacific. They never came back. Ill-prepared for an Arctic winter, their ships were crushed in the ice and the explorers apparently succumbed one by one to the harsh conditions and starvation. Their equipment may have been suitable for winter in England, but not for the far north. Later, more successful expeditions copied the clothing and equipment of the indigenous people of that region.

This writer has a certain amount of sympathy for those poor sailors, having experienced a hint of the dangers of poor preparation for cold conditions as they did. Shortly after the ice storm of 1998 I decided to go to our primitive camp on Cobscook Bay, once again blurring the fine line between courage and foolhardiness, as I too often do. I threw a few things into the Jeep pick-up and headed north. Arriving and driving down over the field in 4-wheel-drive the truck seemed to be sliding in every direction at once. I should have backed out and gone home. Instead I got out, with no ice-cleats on my boots, and immediately fell on the ice, injuring my hip. I managed to hobble through the woods to the camp, dragging a few supplies. For the next two days I lay on the bed too stiff and sore to do much besides keep a fire going and eat an entire legendary Dahlstrom fruit cake, which kept me from starving, as poor Franklin and his men did. As my old pal Eric used to say: “Proper preparation prevents poor performance.” But enough of that.

For an Arctic adventure with a happier ending than Franklin’s, you might enjoy The Arctic Schooner Bowdoin: 100 Years of Wind, Sea, and Ice by Kathryn Beals, published by Down East books in 2020. This is the fascinating story of a Maine-built ship designed to sail the Arctic and to stand up to being frozen in the ice. And it has been doing that for a century. The author has created an exciting mix of adventure, history, and boat-talk just right for a winter evening.

Seedpods to carry around

From Ellen Goodman: “We spend January walking through our lives, room by room, drawing up a list of work to be done, cracks to be patched. Maybe this year… we ought to walk through the rooms of our lives, not looking for flaws, but for potential.”

From Hal Borland: “No winter lasts forever. No spring skips its turn.”

Rob McCall lives in Brooklin, Maine. This almanack is excerpted from his radio show on WERU FM, which can be streamed on weru.org.