Eight oarsmen, including Coast Guard Cmdr. John Mauger, rowed the surfboat the mile from shore to the life saving station.

For years, when Sam Reid looked out the window of his Kittery Point home he could see the derelict, more than century-old Wood Island Life Saving Station. It was not a pretty sight. The structure’s roof had collapsed, the interior had crumbled, a turkey vulture had taken up residence in the watch tower, and there was enough guano to fill a dump truck.

But in its glory days, from when it was built in 1908 until it was decommissioned in 1948, surfmen courageously rowed a surfboat out to sea—in the early years there were no engines in the boats—often at night, and in the winter, enduring howling winds and turbulent waves, to rescue mariners who otherwise might have died. Records show 255 lives were saved by Wood Island Station surfmen in 622 rescues. There were a dozen other such stations along the Maine coast performing similar feats of bravery. Only nine still survive.

Thanks to Reid’s leadership and the efforts of a dedicated group of volunteers, the Wood Island Life Saving Station has been restored, and reunited with an original surfboat that served in Maine, possibly at Wood Island.

Formerly Station Portsmouth Harbor, at the mouth of the Piscataqua River in Southern Maine, the station was owned by the U.S. Life Saving Service, which became the U.S. Coast Guard in 1915. During WWII, the U.S. Navy took over Wood Island to help defend the entrance of the river and the nearby Portsmouth Navy Yard from Nazi U-Boats. The station was turned over to the Town of Kittery in 1973, on the condition the town maintain the property. But it had not. And by the time Reid made it his near full-time mission to save the station, the town was equally dogged in its determination to tear it down or burn it, contending the building’s condition was too far gone.

A born optimist with a gift of gab, Reid eventually convinced the town to let a newly formed nonprofit, the Wood Island Life Saving Station Association, renovate the structure as a maritime museum and educational destination. According to the arrangement, the town still owns the property and did not pay for any of the restoration, but the charity was granted a long-term operating agreement. Over the last seven years, the association has raised $5.3 million from a long list of donors. Putting the structure back together has involved hours of architectural and contractor expertise, cooperation between the Navy, the Coast Guard, the Maine Army National Guard, and a ship’s length roster of volunteers and tradesmen.

The old station needed a lot of work. “It was like a moonscape,” said Aaron Sturgis, of Preservation Timber Framing Co., the lead contractor for the restoration of the building. “We were crawling all over the rocks” from the collapsed sea walls. Sturgis said structural work was begun in 2016, and his crew returned in 2022 to replace the interior walls and all 21 different types of original interior trim that had been salvaged or copied.

Dean Rykerson, the renovation’s architect, said that when he first ventured inside the station it was in such bad shape his foot went through the floor. He also discovered that nesting turkey vulture.

In 2018 and 2019, the Maine Army National Guard’s 136th Engineering Company spent the month of June on site, rebuilding Wood Island’s two football-field long, 14-foot tall, historic sea walls as part of their Innovative Readiness Training. More than 200 soldiers moved more than 800 tons of precast concrete blocks, 700 tons of rock and gravel and “mud” in 45 massive concrete trucks to guard the station from the sea. All of this material and manpower had to travel to the island aboard an 85-foot barge that landed on the beach—great training for the National Guard soldiers.

And then out of the blue, local resident and association board member, Buzz Bussey saw an ad on the internet for an authentic life saving boat. Could it be like one used at Wood Island? Tracking down the boat’s provenance was like finding buried pirates’ treasure. Where was the boat built? When? What kind of surfboat was it? 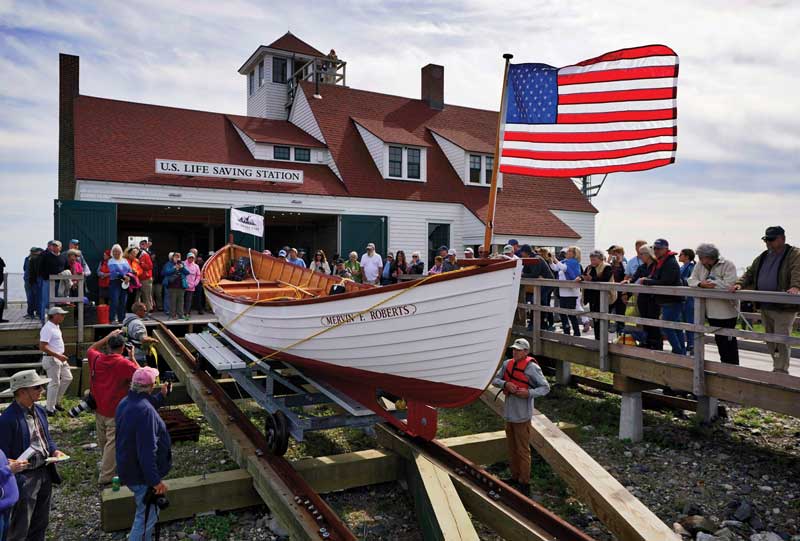 The restored surfboat is pulled up on the restored marine railway at Wood Island.

After weeks following leads in three states, talking to boat owners and boat experts, combing through archives and the internet, there came a “eureka” moment. The surfboat was a Type SR pulling surfboat from the late 1930s named the Mervin F. Roberts. Even though 98-year-old Mervin Francis Roberts no longer owned the boat, he had a lot of stories to share and was anxious to help the Wood Island group. Roberts, a World War II Naval officer, had taken ownership of the 25-foot 6-inch long, 2,000-pound boat in 1998 when he was 77. It had been owned by at least three other men after being declared surplus by the Coast Guard in the mid 1960s.

Soon after the Wood Island group bought the boat for $5,500 in 2020, a search of national survey records by Tim Dring, a national lifesaving boat expert and author, revealed that it had been built in the Coast Guard yard in Curtis Bay, Maryland, using cypress planks on oak frames. Only a half dozen original Type SRs survive nationwide, according to Dring, who found evidence that this boat had been in service in Maine at Burnt Island near Port Clyde and that one just like it had been at Wood Island Station.

The boat was delivered to Nathan Greeley, a master boatbuilder in Portsmouth, New Hampshire, who worked for a year and a half to restore it. He replaced the frames and planks, and added a new keel made from wood from the living room beam of an 1845 home in New Castle, New Hampshire, that had burned down. Historically exact 12-foot spruce oars were handcrafted by Shaw & Tenney in Orono, Maine.

The 200-foot long marine railway at Wood Island—the only one in the country still connecting a life saving station to the water, according to Reid—was restored in 2020 and 2021 by Pepperrell Cove Marine using 1896 railroad tracks that had been donated by the former Pan Am Railways in Waterville, Maine. Those same tracks had served the Portsmouth Naval Shipyard until WWII. The railroad also donated the construction of a historic surfboat cradle to transport the boat on the tracks from inside the station into and out of the water. Tim Dring provided the cradle plans, which were dated 1922. Like the original, the concept was for the rescue boat to be rowed from the sea onto the cradle sitting on the short railway and then be pulled by a winch into the “boat room” in the life saving station.

Although work on the building’s interior was still in progress last fall, Reid, and the supporters of the restoration effort, hosted a celebration that included launching the rebuilt surfboat and hauling it into the station on the rebuilt cradle and railway. The expected opening date for the life saving station museum is summer 2023.

“These boats are crazy rare,” said Reid. “About a dozen restored life saving stations are open for the public nationwide. But only Wood Island has a marine railway with a restored surfboat that can go in the water. It’s pretty seriously cool.” 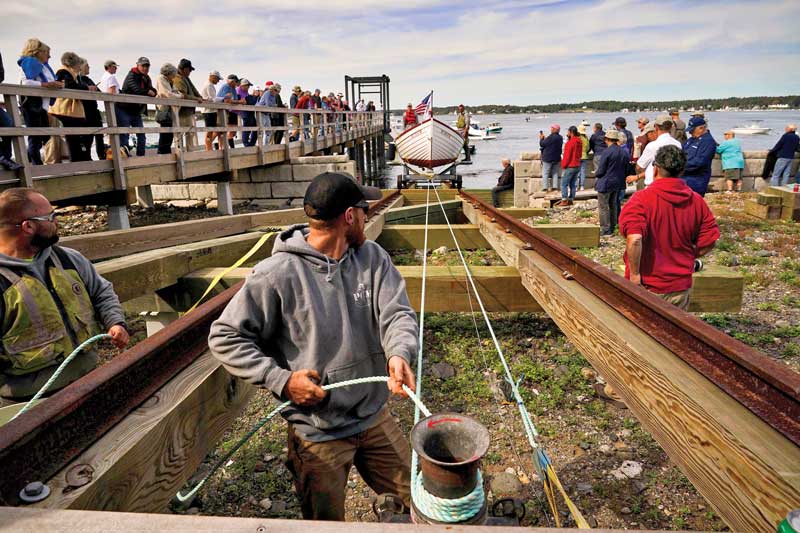 The restored 200-foot marine railway at Wood Island is the only one in the country still connecting a life saving station to the water.

On a sunny, warm day, with clear views of the life saving station and the nearby Whaleback Lighthouse, the Mervin F. Roberts was launched at Kittery Point’s Pepperrell Cove to the cheers of an onshore crowd.

Coast Guard Auxiliary Chaplain Floyd Grace led a parade of eight oarsmen to the dock where they boarded the boat and rowed the mile out to the island. The rowers, including Rear Admiral John W. Mauger, Commander, First Coast Guard District, dipped their handmade oars in unison, a Wood Island flag flapping at the bow and an American flag (or as they say in the Coast Guard, the “national ensign”) at the stern. In a modern touch, the Mervin F. Roberts also sports a new electric engine that can be used when the necessary oarsmen are not available. The lithium-ion batteries will be charged by solar panels on Wood Island.

Wearing a polo shirt and Wood Island Life Saving Station baseball cap, Reid and his team eagerly welcomed the celebrants at the island’s new pier as a bagpiper piped the oarsmen aboard playing the U.S. Coast Guard song. Coast Guard officers from Sector Northern New England pulled the national ensign up the restored Wood Island wreck pole, that will be used to replicate a ship in distress. Just like 100 years ago, a projectile and line will be shot at the pole by a small cannon to practice bringing survivors off a wrecked ship in a breeches buoy.

After speeches and songs, the historically accurate boat was placed on the special cradle with train wheels, and for the first time since 1948 a life boat was pulled up the hill into the building.

Mervin Roberts wasn’t there to witness his namesake boat arrive at its new home—he died on December 30, 2020. Instead, his daughter, Edith Main, of Quaker Hill, Connecticut, christened the surfboat with water brought from the Connecticut River in an old glass milk bottle.

“The big takeaway is the story of the incredible men who risked their own lives to help others,” said Reid. “The Coast Guard does it to this day…risking their lives to save others. It’s all about remembering the brave local men from southern Maine and coastal New Hampshire who rode out to save mariners in distress, usually in the worst possible weather.”

Connie Sage Conner is a retired editor at The Virginian-Pilot. She and her husband cruised on their Kadey-Krogen, Epilogue, with their two cats. They live in Harpswell, Maine.