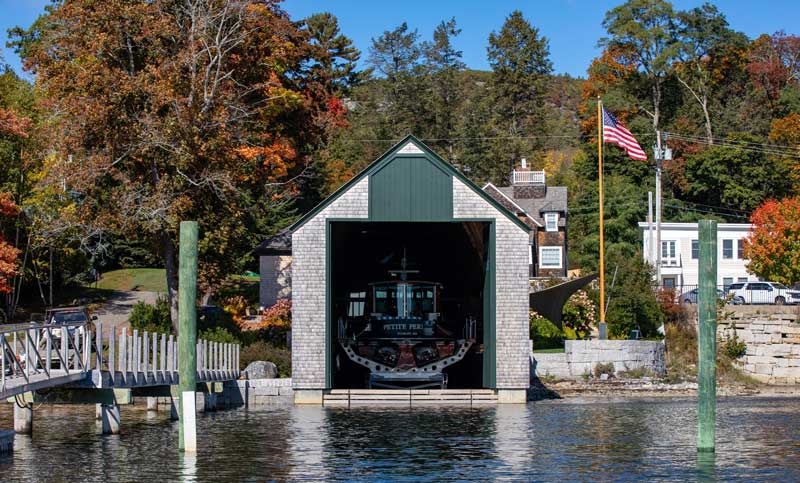 Built to house a yacht in the early 1900s, the American Boathouse has been rebuilt to house a 48-foot Hinckley. Here, the big doors are open revealing the Hinckley on its cradle. The slatted gates at water level keep debris from the basin inside. They also open to allow the boat on its cradle to slide down the new marine railway and into the harbor.

More than 120 years after it was built to house a rusticator’s steam yacht, a historic boathouse at the head of Camden Harbor and its marine railway have been meticulously rebuilt and restored to house a modern powerboat.

Known in recent decades as the American Boathouse, the 180-foot long and 22-foot-wide wooden structure was in danger of falling down when a history-minded couple bought it in 2016 with the intention of saving the building, which was listed on the National Register of Historic Places. The building had been empty and for sale for many years after the Cannell Boatbuilding Co. and Cannell, Paine & Page Yacht Brokerage had moved out.

“We were walking by and saw the ‘for sale’ sign and thought this would be a fun project,” said one of the owners, a couple who own a seasonal home elsewhere on Camden Harbor.

Early on, the couple contacted Jay Fischer of Belfast-based Cold Mountain Builders, who became the lead contractor on the job. Cold Mountain had worked on the building in the 1980s for Bill Cannell, installing a new roof and siding, and making other repairs when it housed Cannell’s boatbuilding operation.

The project was complicated by zoning and the building’s historic listing—it is considered one of the oldest boathouses of its type in the country. The sale to the new owners was conditional on an eventually successful town vote to change the zoning to allow the building to be used for both residential living and boat storage, instead of boatbuilding. The Maine Historical Preservation Commission had to approve all the construction details to make sure the building’s historic features were saved. Although in the beginning the team hoped to save as much of the historic material as possible, they ended up replacing more than they had planned because of rot and deterioration, Fischer said. The new materials are the exact same dimensions and look the same as the old, he added.

“They were very, very strict,” he said. “Everything had to be exact.”

Mohr, who was the project’s point person with Maine Preservation, as well as with the Army Corps of Engineers and other agencies overseeing the harbor side of the project, said summer resident Chauncy Borland’s mother hired a builder and paid to have the boathouse built in 1901 to house the family yacht Mona Loa. At the time, Borland was in his early 20s. The so-called headhouse, a side addition that housed the winching system for the marine railway, was added two years later. According to Mohr, Mrs. Borland turned the building over to her son several years after that.

This panoramic photo shows Camden Harbor around 1904 when the American Boathouse was built. Look closely at the big building at the head of the harbor to see the long white hull of the Mona Loa on the boathouse ways. Photo courtesy Camden Public Library

Over the years, Borland, who was the first commodore of the Camden Yacht Club, owned three boats with the same name, all designed by Arthur Binney. The original steam yacht Mona Loa was 131 feet long and had a long bowsprit that was protected by a bumper when the boat was hauled in the boathouse; the big water-side doors included a smaller section on top to accommodate the vessel’s smokestack. The top cutout, now purely decorative, remains.

Back then, the boat bay extended all the way to the street, Mohr said. In the new renovation, the boat basin extends just 80 feet, with the rest of the space being used for an apartment.

The boathouse once was one among several nestled at the head of the harbor to house similar yachts. As part of the restoration, the new owners bought a dilapidated adjacent red boat shed and tore it down to provide access for construction on that side of the building. That space now holds a small deck, a patio, and private garden. Two other remaining sheds on that side of the harbor belong to the Lyman-Morse boatyard.

Inside the rebuilt boat bay, sea water laps against new concrete walls and footings, and sends shimmering spots of reflected light dancing around new wooden beams overhead. Interspersed with the wood are well-camouflaged steel frames that give the high structure stability. When it was built, the boathouse was tethered to the ground outside to keep the wall from tilting in high winds, but those tethers were removed years ago, contributing to the old building’s slow collapse, Putnam said.

As part of the restoration, the original marine railway winch was preserved and put on display. In the early years it was powered by a capstan turned by oxen.
This efficient, modern electric capstan has replaced the massive system shown in the next image.
The boathouse as it looked in the 1980s when Bill Cannell built boats there. Image courtesy Mohr & Seredin Landscape Architects
There is enough water in the boat basin and depth at the bottom of the marine railway to launch or land the boat at between mid- and high tide.
The steel rail car was custom-designed by Lyman-Morse Technologies to hold the owners’ Hinckley.
The boat cradle and car that holds it are moved by a continuous chain loop system connected to an electric capstan winch.
The boat on its cradle inside the boat basin.
The new marine railway, with its five degree incline, is fully visable at low tide. Photo by Polly Saltonstall
Body Footer:

Back in the early days, the up-hill, road-side space held a huge winch, pulleys, and cogs that controlled the marine railway. In the first few years the power was supplied by a team of mules or oxen, and later by a small donkey engine, Mohr said. The imprecise nature of the animals’ pulling is the reason for the addition of the bumper to the first Mona Loa’s bowsprit during hauling, he said, explaining: “So if they overpulled, it wouldn’t damage the bow of the boat.”

The 10-foot radius path the animals wore in the wooden floor while circling the capstan was still there when the new owners bought the building. While much of the original equipment didn’t fit in the new building and the flooring could not be saved, the owners preserved the original winch system, installing it in a special display case in the living quarters.

The new boat-hauling system is an engineering tour de force. “The owners said they wanted to be able to push a button and have the doors open and the boat slide into the water,” said Putnam. “While the stakes are slightly higher, it’s the same simple concept that my father and I used to launch our 1972 Whaler in our boathouse at the lake. We used a stick welder and a pop-level, but at this scale we needed to coordinate with lots of smart people to ensure mechanical, electrical, and structural components performed predictably so these owners could feel as though they were simply loading a Whaler.”

The system includes an aluminum boat cradle, specially designed to hold the owners’ 48-foot Hinckley. It sits on a 50' by 18' steel rail car that weighs about 7 tons, according to Samir Gupta, manager of Lyman-Morse Technologies division. The technologies division designed and built the custom boat cradle, the rail car that holds it, the electric capstan that hauls the boat, and all the controllers that make the system work safely, as well as new doors and a system to operate them.

Prock Marine designed and built the new marine railway, and installed the new cement footings and walls and the rails that extend out into the harbor.

The cradle and rail car are moved by a continuous chain-loop system connected to an electric capstan winch. The doors, boat cradle, and rail car can be operated from small hand-held remotes the size of garage door openers.

When the owners launch the boat, they climb on board from a small platform connected to the cradle, and operate the system from the boat. The chain slowly rotates with a certain amount of squeaks and clanks, lowering the boat and its cradle down the marine railway’s five-degree incline until it reaches two tall wooden poles in the water outside that mark the end, and the boat floats free. The system works similarly when the boat returns. The owners drive it onto the cradle, noting markers on the poles and cradle that let them know when the boat is set correctly, and then pushing a button to move it back inside. The water is deep enough to launch at about half-tide and higher. Should the tide not be right, the boathouse also has an adjacent dock with room for the 48-foot Hinckley and other boats.

While the 10-by-20-foot wooden doors facing the harbor look the same as they have for years, complete with the American Boathouse lettering, appearances can be deceptive.

The old wooden doors have been replaced with new ones made from fiberglass wrapped around a foam core and veneered with mahogany.

At the push of a button, steel arms silently fold the big doors back against the interior walls to open the boat bay. Another button closes them. Below the waterline another set of stainless steel grids veneered in oak allows water to flow in and out, but blocks floating debris. Bubblers installed under the basin keep the water from freezing in the winter.

The complex project took more than two years to complete, but the owners and all the people who helped make it happen are pleased with the results. And the rebuilt American Boathouse is ready for the next 100 years.

“I felt really honored to be involved with a project of this importance, as did every else,” said Fischer.