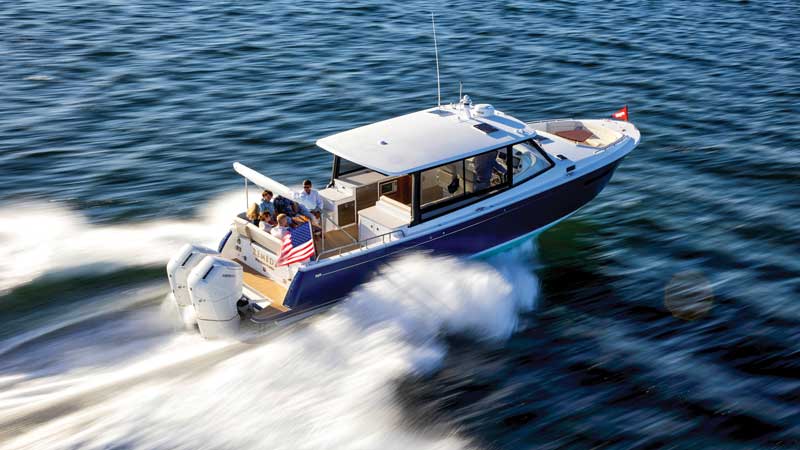 The new MJM4 offers a versatile platform for enjoying the water in a downeast-style boat. Photo courtesy MJM Yachts

MJM Yachts introduced its newest poweryacht, the MJM4, a year after the MJM3, hence the name. But the 46'8" downeast-style day cruiser also boasts four zones of fun: an indoor/outdoor pilothouse with a galley-up layout, comfortable seating in the open bow, a transom walk-through that makes easy access to the swim platform for fishermen and swimmers, and cozy quarters down below with a large V-berth, a double berth amidships and a head with a shower and plenty of headroom.

The MJM4 is being produced in MJM’s new factory in Washington, North Carolina. Previously the company worked with subcontractors, with most of its boats built at Boston Boatworks in Massachusetts. Peter Johnstone, who took the reins of the company from his father Bob Johnstone in recent years, explained that the move south has allowed MJM to bring all aspects of production in-house.

“We needed to expand capacity and take the next steps with technology,” he said. “Now we do everything from design to production. It allows us to make continuous improvements and we can set our own standards for quality and finish.”

In the process, MJM has expanded its production capacity, he said, and now builds an average of 100 new boats a year, compared to 24 when he took over. In addition, the company has been able to build more models simultaneously—“We will have six models under construction here within the next 18 months,” Johnstone said, compared to just two at a time in the past.

The idea behind the MJM4, which was designed by Doug Zurn and MJM’s in-house team, was to build a versatile boat that could be used for entertaining or for a long-weekend cruise for a couple. The weather-proof pilothouse can be easily opened with electronically activated windshields and sliding side windows and doors. The galley is on the same level as the steering console and cockpit seating so no one has to go down below to prepare lunch.

The new model features MJM’s proprietary vacuum infusion formula, which makes the hulls light but strong. Power options in the new design include two or three Mercury Verados. A sizable fuel capacity of 475 gallons gives the MJM4 a long range. Top speed with two 440-hp outboards is 50 mph, according to MJM’s spec sheet.

Johnstone said the model has been extremely popular since its launch last September. Plans for future models include the MJM5, a bigger version of the 4.