The work of three generations at Little River Boat Shop

All photos by Brian Robbins

Built for a Machiasport lobsterman, the 50' Mattie & Ayva cruises at 14 knots courtesy of her 800-hp Yanmar.

Once you’re in Cutler, Maine, you’re pretty well downeast. You have a little way to go before the Canadian border, but not far. The fishermen of Cutler are basically offshore as soon as they take the mooring pennant off the bow bitt. Lobstering in Grand Manan Channel is no picnic: working with the hard-running tides off there requires timing, and it doesn’t take but a puff of wind against that same tide to make things nasty in short order.

I remember hearing stories back in the 1980s about a Cutler lobsterman who fished hard out in Grand Manan Channel with a 33' Young Brothers (which he also raced at some of the summer lobsterboat races). And there were also stories about a do-it-all kind of guy who was good at everything from fiberglassing and woodwork to metal fabrication and any sort of mechanical challenge.

Eventually I figured out the stories were all about one guy: Norbert Lemieux.

Over the years, Lemieux’s own lobsterboats have bumped up in size from that 33 Young Brothers—he now fishes a 46-footer (a lengthened Young Brothers 42)—and they’ve all been finished by Norbert in his Little River Boat Shop.

In the meantime, Norbert’s 47-year-old son Nick has followed in his footsteps, both in the shop and down the bay. Nick’s current lobsterboat is an Osmond 47 stretched to 50'. 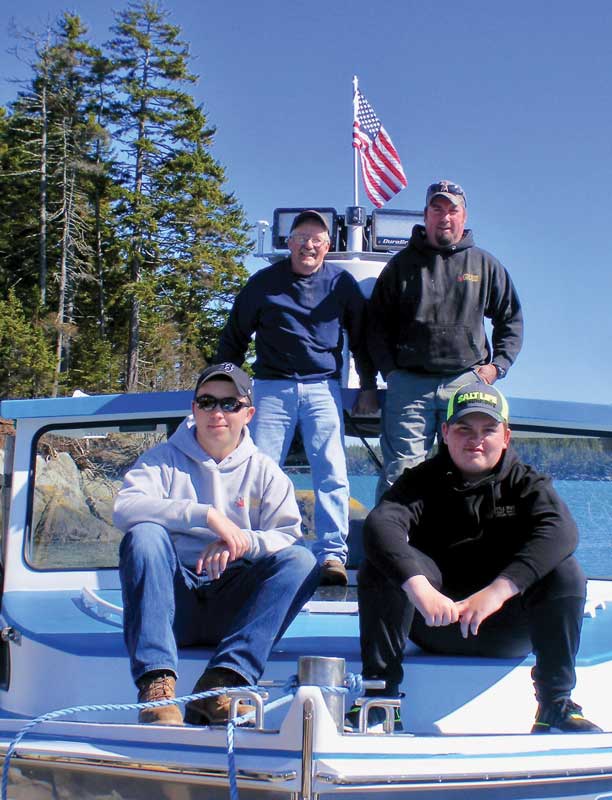 The three generations of boatbuilders in the Lemieux family: (Back row) Norbert Lemieux and son Nick and (front row) Nick’s sons, Ryan and Jackson. Plus, there’s a third generation of Lemieux fishermen/boatbuilders keeping the family tradition going: Nick’s sons Ryan (20) and 18-year-old Jackson tend lobster gear out of their own Little River-built boat (a Young Brothers 33 stretched to 35') and display their own versions of their grandfather’s jack-of-all-trades genes in the boatshop.

Besides their family fleet, the Lemieuxs have finished boats for customers throughout New England. Little River-built boats have a reputation for being rugged and well-thought-out: as one customer put it: “They build it like they’re going to fish it themselves—and they go hard.”

This year’s big project by Little River was the 50' Mattie & Ayva, built for Machiasport lobsterman Matt Huntley. When Huntley began thinking about a larger boat to replace the 42-footer he was fishing, he did his homework; the 50' Wesmac came out on top—but he wondered about increasing the Wesmac 50’s 17'6" beam. He sat down with Steve Wessel at the Wesmac facility in Surry and came away satisfied: Wesmac would widen the standard 50'hull to 19'4".

The second part of the equation was the finisher: Huntley was impressed by Little River’s track record and wanted them to build his 50, including a custom wheelhouse rather than a molded unit. “I’d seen some of the boats they’d built,” he said, “and really liked the looks of them. They’re fishermen themselves and know how to put a work boat together.”

While the Lemieuxs and their boat shop crew are all multi-talented, the basic flow of things for Huntley’s 50-footer saw Nick leading the way on the construction and systems installation, while Norbert and Ryan focused on all the custom metal fabrication work for the project. Jackson had to strike a balance between high school and boat building, contributing to things as he could.

Early on, Nick Lemieux took measurements off Huntley’s hull while it was still at Wesmac and came away with enough information to lay up the panels for Mattie & Ayva’s custom “piggyback”-style wheelhouse before the hull arrived in Cutler.  (The hauling station is located aft of the main part of the house, rather than a more traditional side-by-side split.) 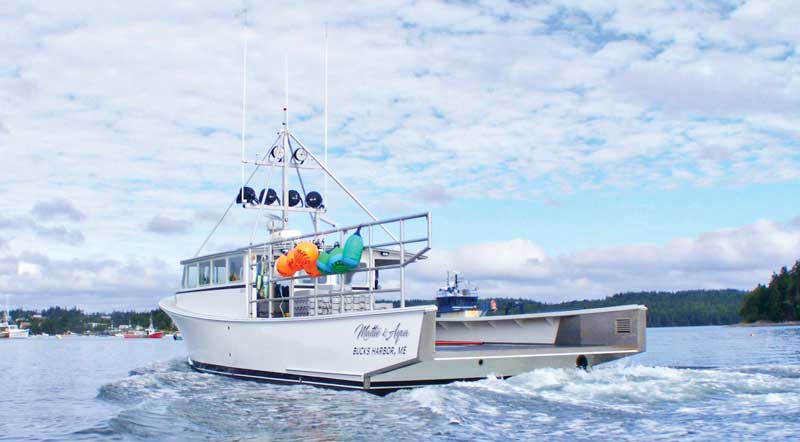 Another feature that sets Mattie & Ayva apart from other lobsterboats in her size range is her main engine: an 800-hp Yanmar. Mention Yanmar to most folks and the models they’re most likely to be familiar with are compact, fairly high-rpm pleasure-craft versions, such as the 6.7-liter Yanmar that cranks out up to 550 hp at 3,000 rpm. But after talking with Tim Toppin of Toppin’s Diesel (his go-to engine man for years) Huntley had a different sort of Yanmar in his sights: the 20-liter 6AYEM-ET, a slow-turning (2300 rpm) inline 6 with a rating of 800 hp. The key to an efficient cruise with the beamy 50-footer would be mating the big Yanmar to a deep-ratio gear and channeling the 800 horses through a good-sized propeller.

Huntley had heard good things from fellow lobstermen who liked the electronically-controlled Twin Disc gears (especially for slower speeds when hauling trap trawls); Toppin’s answer was a 2.5:1 MGX 5136A Twin Disc with single-lever QuickShift controls at each helm station. Nick himself had a spare 40"x39" 4-bladed prop on hand to launch with.

The combination proved to be a good one: in working trim (including dual fuel tanks topped off to a total capacity of 1,130 gallons and the 18-crate center lobster tank flooded), the Mattie & Ayva pulled an easy cruise of 14 knots at 1,725 rpm with a fuel burn of 30 gallons per hour.

“The boat; the engine; the gear and the controls; the extra room I have now and the way things are laid out... I’m really happy with all of it,” said Matt Huntley. “These guys build a great boat.”

That’s been standard operating procedure for the Lemieux family for a long time.

Talk about family traditions: there have been three generations of Volvo Penta-powered Young Brothers 33s in the Lemieux family. Norbert Lemieux was fishing (and racing) one back in the 1980s when I was first aware of him, powered by a TAMD60 Volvo. Son Nick’s first full-size lobster boat was also a 33, customized with a deeper keel (to accommodate a larger propeller) with a TAMD61 Volvo on the engine beds. Nick’s sons Ryan and Jackson are currently fishing their own version of the 33'x11' Ernest Libby-designed model: Little River laid up a standard hull themselves (the Young Brothers molds are owned by SW Boatworks in Lamoine, ME) and took things from there. The result is Obsession, lengthened to 35' LOA with a beam spread to 12'6", the sheer raised by 4" all the way around, and a fiberglassed-in chine to ride on. And the choice of power? A D8 Volvo, of course. —Brian Robbins