I’ve just read Doug Fleet’s Letter to the Editor (#179), “Power Thoughts.” A 35-foot MJM or LM is much heavier than a 30-foot anything, never mind a light, clean-sheet design like the Nimbus that I own. Still, our W9 has recorded a top speed of 47.7 MPH with one 300HP Merc, which is at least 5 MPH faster than our old 30' Whaler with two 300s. (Much less scary, too.) The difference is due to both weight and hull design.

Mr. Fleet is right; naval architects and boatbuilders should concentrate on fuel-efficient performance, especially as electric boats are coming. It’s a good topic—what do you think of turning, say, Art Paine loose on this?

As a long-time subscriber to Maine Boats, Homes & Harbors (dating back to when it was Maine Boats & Harbors), I am used to a fascinating and, sometimes, eclectic mix of articles. Nothing, however, prepared me for two stories in the September/October edition. “Still Boating After All These Years” and Off the Drawing Board’s profile of Dougie Dodge were, in fact, love stories. Dougie and Brenda, Herb and Ruth... what else could they be but love stories.

The stories brought both smiles and a couple of tears.

Perhaps you might consider changing the name of this fine publication one more time. How about: Maine Boats, Homes, Harbors & People. After all, at the heart of every good story there exists the human heart that makes everything worth doing.

I feel for publisher Ted Ruegg’s oar varnishing dilemma (From the Publisher, MBHH #179), as I often re-sand and varnish my oars, or my father’s old Shaw and Tenney oars. Last summer I did a relatively new set of Shaw and Tenneys, same old thing, except this time I ordered the leathers from WoodenBoat, with the lacings, instead of brass tacks, ever so much nicer! I did have to go to YouTube, for proper technique. I had to get a proper leather punch, but now I can make belts too. Good luck!

By the way, I always use foam for varnish! Keeping real bristles good with infrequent use is always tough.

Good luck to the new publisher, Ted Ruegg. You’ve got big shoes to fill. I’ve enjoyed every issue of Maine Boats, Homes & Harbors, and especially John Hanson’s epistles. I’ve liked every issue and look forward to many more in the future.

Thomas B. Hovey via email

I lived and worked for many years in Camden; my family hails from Bath. I am living in warmer climates now, but Maine will forever hold a special place in my heart. I was living in Camden when John Hanson started MB&H, and recently I became a subscriber.

A close friend of mine was raised on Monhegan and has so many stories of growing up as a wee lass, so I was really pleased to read Mimi Steadman's article about the island (MBHH  #179), and my friend thought it was a wonderful piece. The way Mimi describes the incredible attributes and history of the island should entice anyone to want to visit.

I am so happy to reconnect with the Maine I remember and love, and so glad that I subscribed.

Thanks for a great read.

While it would be really cool to see a REO truck hauling Kyloe to her natural habitat (MBH&H July/August 2022, #177), the vehicle is actually a Mack B-61. I’m not certain, but I think the B series was manufactured from the early 1950s through the mid-1960s. I do know that they were the first Macks to be equipped with diesel engines. 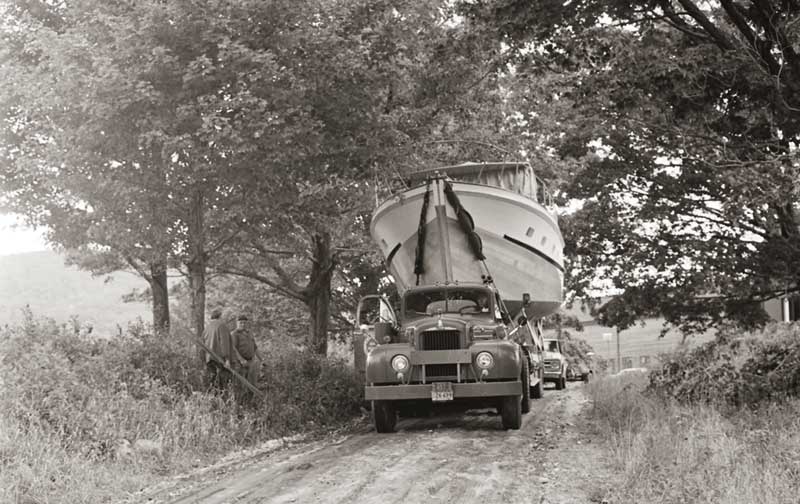 There is a photo in Issue #177 of a truck pulling a boat. You call the truck a REO. It is a Mack (a B-42 model I think) with a bulldog hood ornament. I was born and raised in Eastern Pennsylvania, near Bethlehem, where Mack trucks were built.

I enjoy your magazine. I love old stories and photos of boats and trucks.