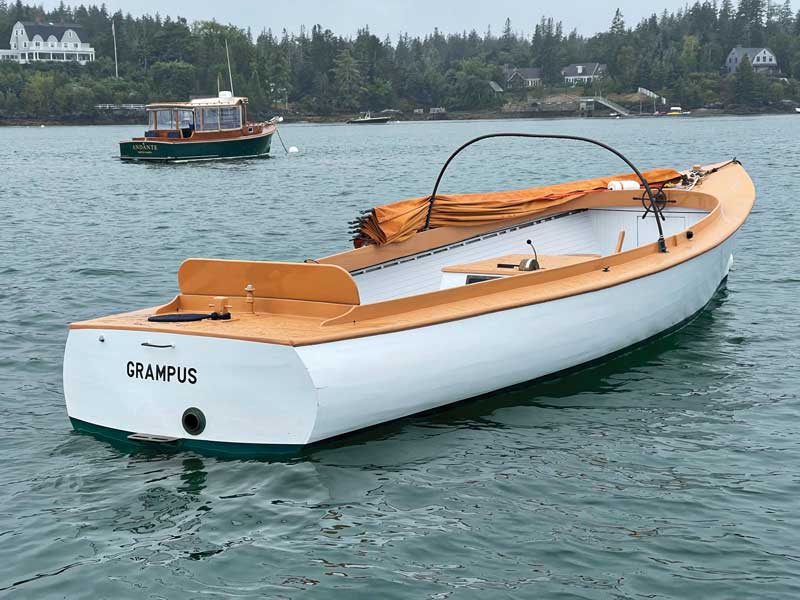 Built at North Haven’s J.O. Brown and Son in 1927 and restored by Artisan Boatworks in Rockport, Grampus features classic stick steering, and an adjustable canvas cover that originally came off a fancy mahogany speedboat. Photo by Polly Saltonstall

While there are many new boat designs on the market, some boaters just prefer the classics. That’s the case with a summer family on the island of North Haven in Penobscot Bay, who were gifted with an aging wooden launch. When it seemed about to give up the ghost, they made the decision to invest in saving the old boat.

Now named Grampus, the 26-foot open launch was built in 1927 on North Haven at the J.O. Brown and Son yard for an early rusticator. Originally named the Linwood A., she was renamed Grampus by a new owner on North Haven in the 1940s and painted gray in case she was needed for war duty. She passed through the hands of another North Haven summer family, before eventually landing in 1980 with architect Henry Cobb and his family, who used her for years to get around Fox Island Thorofare from their North Haven summer home.

When the original Chrysler Crown gasoline engine finally just stopped working, the new owners took the boat to Alec Brainerd at Artisan Boatworks, in what likely was its first-ever trip off the island since 1927.

The current owners became acquainted with the boat through a friendship with Cobb. The two families shared Grampus, splitting maintenance costs, for over a decade before Cobb sold them the boat for $1. The family loved the boat, but it was in tough shape after years of deferred maintenance. The engine was so unreliable that they often would tow a Whaler behind on outings in case Grampus’s ancient engine broke down, “which happened often,” the owner said. It wasn’t fast—cruising speed was about 8 knots—but the boat was part of the family. So, in 2021 when the engine finally totally died and the boat looked like it might follow suit, the owners decided to save it.

“It’s a heritage thing,” the owner explained. “I love the boat and my kids are fond of it, and really fond of North Haven. They are determined to enjoy Grampus as long as they live, so that’s a comfort.”

Originally built with an oak backbone and cedar frames and iron-fastened, Grampus was badly hogged when she arrived at Artisan’s Rockport shop. “We determined a holistic approach was best, to look at the whole boat and hit the reset button on her longevity,” Brainerd said.

Artisan’s crew spent about four months restoring Grampus. This included replacing the keel members and forefoot, all the floor timbers and a handful of planks on the bottom, and hull and transom frames. They also replaced all the iron fastenings with bronze ones. In addition, a new Volvo D2-60 diesel engine was installed.

“Since the top half of the stem and most of the keel were in good condition, we opted to laminate a husky new forefoot using 1/8" white oak veneers and G-flex epoxy. During the re-framing, we were able to jack up the transom nearly 4" to restore the hull profile and eliminate the twist,” Brainerd said.

When the Artisan team first began peeling away the layers, they discovered an interesting situation with the frames. One set went down to the turn of the bilge and another overlapping set went up to the topsides. At first, the boat builders thought maybe the frames had been awkwardly sistered at some point, but then they heard from North Haven resident Doug Stone, who explained what happened. Doug told them that his father, Irven Stone, along with the caretaker for the owner at the time, rebuilt the boat in 1950. Grampus was originally skeg built—meaning that everything below the miter where the vertical keel planking meets the horizontal bottom planking in the aft half of the boat was solid wood.

“She got so she was leaking badly and the only thing holding the keel in was the floor timbers,” Doug Stone said.

The elder Stone removed the whole centerline structure of the boat, and replaced it with a new set of planks and frames that tuck down into the keel in what is known as “built-down” construction. This gave the boat a bilge, Doug Stone explained, that allowed water to run aft in the boat instead of pooling forward. He recalled that another boat like Grampus was built by J.O. Brown around the same time. She also was leaking badly and her owners planned to have her rebuilt in a similar way, he said, but the repairs did not get done, and “she never made it.”

For his part, Brainerd said, “I’ve never heard of that having been done to a boat before. We just replaced what was there with new stuff.”

Grampus will return to North Haven next summer at 95 years old, not repaired, but restored—an important distinction, Brainerd said.

“Ninety-nine out of 100 boats just like her were run up on a beach and abandoned. This one has been rebuilt twice,” he said. “It’s cool that people are saving old boats.”