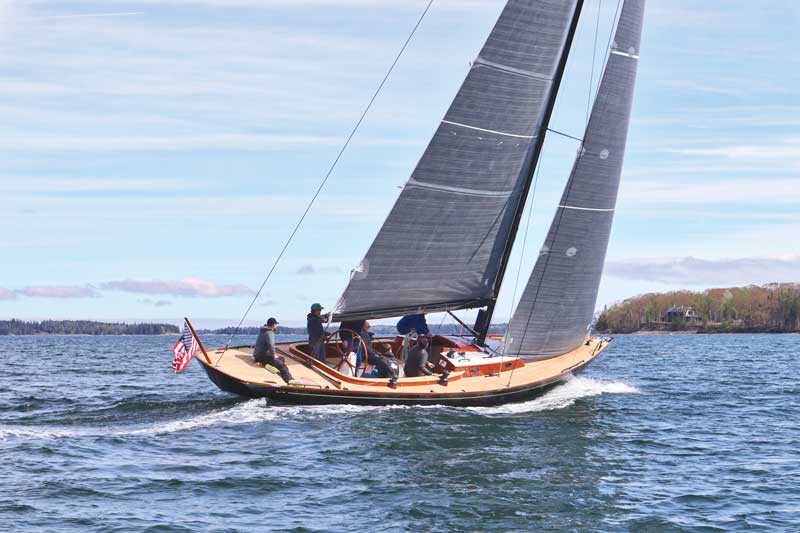 The new Eggemoggin 47+ shows off her good looks on a test sail soon after launching. Photo courtesy Brooklin Boat Yard

Starting in 2001 with Lena, Brooklin Boat Yard launched four versions of the Eggemoggin 47 sloop. Initially designed by Robert Stephens, the cold-molded boats were fast and responsive. But when a client approached the yard to build a new version of the 47 for sailing in Narragansett Bay, with its brisk afternoon sou-westers and hefty seas, the client and the yard’s in-house design team thought there might be room for improvement.

The result is a newly updated version, dubbed the 47+. The boat, named Tink, was designed by BBY’s talented in-house yacht designer Will Sturdy, with a little help from his friends. This included the owner, who races 12-meters out of Newport, as well as seasoned skipper Ken Read, who is considered one of the world’s top racers, engineers at Hall Spars, the sailmaking gurus of North Sails’ Newport loft, Dirk Kramers (SDK Engineering) for the keel and rudder foils, and a team of master builders, systems experts, and Spirit of Tradition crew members employed at the Brooklin yard.

Tink was inspired by the great traditional looks and winning ways of previous versions of the Eggemoggin 47. The first, Lena, was conceived entirely by Stephens; the designs for later ones, Lynette, Iris, and Lark, received input from Jim Taylor of Marblehead, Massachusetts, and BBY’s designers Keith Dibble and Eric Blake on a more powerful sail plan and reconfigured deck and cockpit layout. These first four 47s took the concept of traditional, skinny, low-freeboard day racers, and souped it up with sleek rigs and modern, low-resistance underbodies.

The new client showed up on the doorstep in Center Harbor with Lynette in mind, but asking for improved performance. Sturdy had spent hundreds of hours racing on Lynette, dreaming about minor improvements. With that background in the bank, he conspired with a dream team of Rhode Island racing stars, prepared to expend whatever resources necessary to test the modulus-of-elasticity of the yacht racing envelope.

Starting with hull design, the newly launched boat is a more powerful hull form. The beam was increased 18 inches, the keel gained a foot, and efforts were made to increase hull strength and lower the center of gravity. Volume distribution was modified to reduce drag despite the wider beam. The mast, spreaders, sails, and all standing rigging are carbon fiber; the halyards are the latest Dyneema cordage. These efforts nearly double the design’s righting moment. A small, barely noticeable increase in freeboard adds stability while providing a more commodious feel down below. All these changes vastly improved stability.

But the biggest, most revolutionary aspect in the revamped design is that Tink can be sailed or raced with negligible physical effort. While a crew of strong-arm linebackers is the norm in the top leagues of sailboat racing, this boat can be raced all day long without resorting to a winch handle. All the critical functions of sail handling are done by hydraulic or electric power. A majority of these operations, the electric ones, are accomplished at the push of a button. 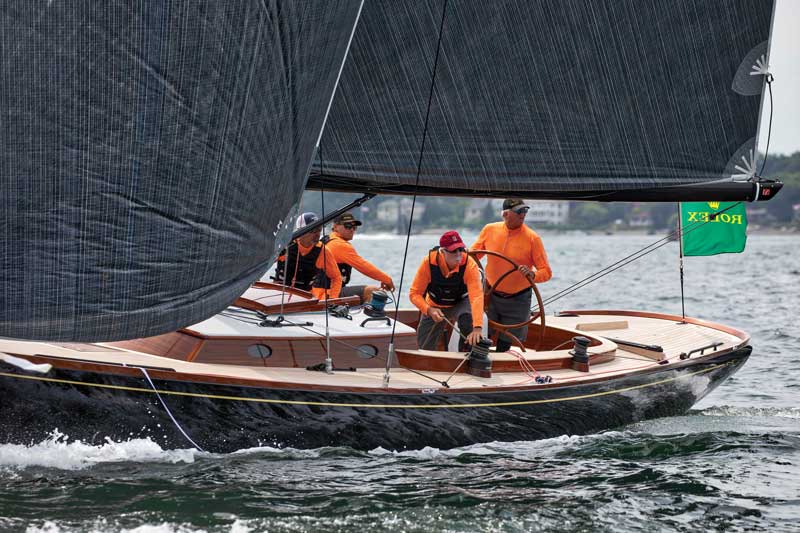 The redesign of the 47 has a more powerful hull form and sail plan. Photo by Billy Black

Think ergonomics—the interaction between human effort and work efficacy. Yacht designers in the past did not always pay much attention to this. Aboard Tink, the backstay, Code Zero tack line, fore and aft adjustment of jib leads, and flattening reef tension all are controlled by hydraulics with electric motorized winches and an electrical dump valve for hydraulic functions. The owner’s rep, Bob Campbell, an ex-America’s Cup crewman who’s sailed with the owner for many years, helped place the pushbuttons for all these functions in the right places. Select crewpersons on the weather rail, in the “pit” (companionway), and athwart the helm have access to push buttons by which they can move the mainsheet traveler, adjust the mainsail outhaul, pull headsails and spinnakers aloft and lock them there, trim or ease sheets, and overhaul (ease) the tack line for the Code Zero reaching sail. The cockpit winches are three-speed, including a high-spinning mode by which a lightly loaded line can be retrieved wicked fast. All electricity is supplied by lithium-ion batteries, whose engineering was described as rather simple by the designer. Which says something about how cutting-edge the standards are at BBY. In-house electrician Jesse Larrabee did the work.

And then there is the rig. As boats have been designed to be lighter and stronger, with diminished resistance, jibs have become taller, and shorter at the “foot.”  This gives higher aspect ratio and theoretically, greater efficiency for given sail area. But once a jib gets so short that it no longer overlaps the shrouds holding the mast up, those shrouds can be anchored farther out, at the edge of the deck. In addition to adding strength to the mast with minimal frontal area and weight, this also allows the jib to be sheeted much closer to centerline. Tink’s jib, when racing, can be sheeted at 6.5 degrees, and although this requires keen concentration on the helm, it accounts for the kind of pointing upwind that wins races.

The history of boat design is replete with instances where theory was embarrassed by ultimate practice. Not in this case. Tink had her debut during the New York Yacht Club cruise in Newport. She won every single race the first week. At which point there arose some polite grumbling. After more measuring her rating was slightly adjusted—downwards—by 24 seconds a mile!

Having once been a bit of a racing hot-shot myself, I hold out some hope—because I so love Spirit of Tradition wooden yacht racing—that Tink can be whipped, occasionally. That’s best for everybody. And certainly there’s always hope. After all, sailing is primarily a test of skill. In that vein I’ve always held that the most valuable component of a winning sailboat design is the nut behind the wheel. But then I remembered. Ken Read raced aboard Tink most of last summer, but he almost never drove.

Hull No. 2 of the Eggemoggin 47+ was under construction this winter at BBY, and is scheduled to be launched in the spring of 2023.