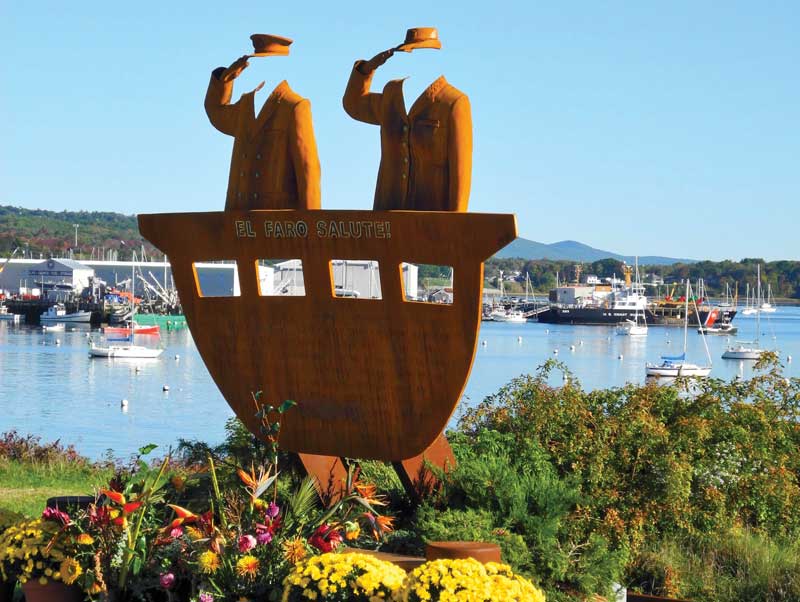 This memorial by Maine artist Jay Sawyer honors all hands lost in the sinking of the cargo ship El Faro. The sculpture includes the names of all 33 crew members, including four who hailed from Maine. Photo by Lynette L. Walther

Salt water and seamanship run deep in the veins of Maine’s history. To this day, the sea-faring reputation of the state is spread worldwide by modern-day Maine captains and mariners—men and women—joining with those from the past who have sailed the oceans for centuries. When news of the sinking of the 790-foot roll-on-roll-off cargo ship El Faro in Hurricane Joaquin in October of 2015 became public, it was not surprising that the 33 crew members who were lost included four Maine residents, all graduates of Maine Maritime Academy: Captain Michael Davidson, 53; third engineer Michael Holland, 25; second mate Danielle Randolph, 34; and third assistant engineer Dylan Meklin, 23.

Almost seven years to the day after that tragedy in the south Atlantic, a permanent memorial to all of those lost when the El Faro went down was dedicated on the Rockland waterfront last fall. The blustery October day chosen for the dedication happened to coincide with the offshore passage of a different fall hurricane. But the inclement weather did not deter the event’s nearly 1,000 attendees. The poignant steel composition, El Faro Salute, depicts two faceless mariners—a man and a woman—saluting above a silhouette representing the stern of El Faro, upon which are inscribed the names of all 33 crew members.

Friends, family members—many from other states—local residents, dignitaries, and old salts attended the emotion-filled dedication. The event marked the culmination of more than six years of effort by artist Jay Sawyer of Warren.

The loss of the El Faro struck Sawyer especially hard and close to home. He, too, graduated from Maine Maritime, and had spent years in the merchant marine service. He said that what he had encountered during his five years at sea enabled him to comprehend what those mariners on the El Faro had experienced.

“I understood the need for healing,” Sawyer said, explaining why his focus shifted from the victims to helping their friends and family. Sawyer is known for monumental steel spheres and sculptures that are installed in both public and private collections in Maine and elsewhere. “I slowly became aware of the magnitude of their suffering and it crushed me. I felt I could provide some sense of comfort. But this sculpture has given me the ability to heal.”

Over the years since the tragedy, the elements of the memorial took shape in Sawyer’s mind and then in his metal-working studio. In the process he connected with some of the families of those lost and they became part of his project. One family in particular reached out. “They had purchased a welder as a gift for their son, but their son had not unboxed the welding machine. It was but one facet of symbolism worked into the memorial and in so doing, the parents became a part of the task at hand,” the artist said. It is a poignant irony that the welded sculpture honors a young man who never got to use his own welder. In passing that welder on to Sawyer, the parents and their son became a part of the creation of the memorial.

Sawyer estimates there is a ton of steel within the 10-foot-tall composition. He used his own cap and his hand as models for the components of the male mariner. His daughter, Sarah, who often works in the studio alongside her father, was the model for the female mariner’s hand. For the body, “several ladies modeled, all with a connection to the industry,” Sawyer added.

“I’d go for a spell, working on it, and then I’d run out of money,” the artist recalled of the lengthy, six-year process. “I’d do some fundraising and then I’d go back to it. It was years of passion, but the last year was non-stop [work on the memorial itself]. It was a huge effort… But this [memorial] is a huge testament to the power of art to heal.”

The El Faro Salute stands in silent salute to all those sons and daughters of Maine who “go down to the sea in ships.” The memorial can be found at 44 Atlantic Avenue, facing Rockland Harbor.

Contributing Editor Lynette L. Walther is the recipient of the National Garden Bureau’s Exemplary Journalism Award. The Camden-based artist and writer covers a range of topics.