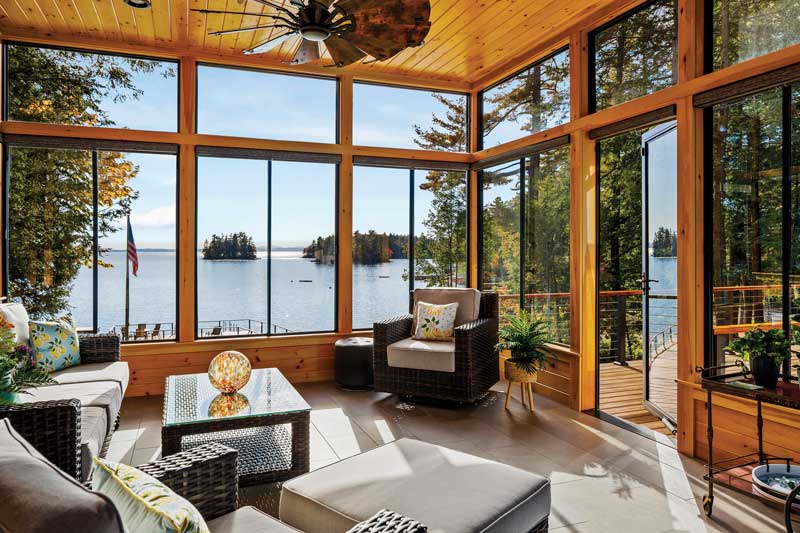 This screen porch is connected to the kitchen by wide folding doors. It also contains one of the homeowner’s wish-list items: a pizza oven.

Ron and Angela Valentine had owned a small rustic camp in Casco on Sebago Lake for about 15 years when they decided the time had come to improve the house to make it a year-round home with room for their four adult sons and lots of entertaining.

The couple, who spend their winters in Derry, New Hampshire, had a good idea of what they wanted: a walk-out basement, lots of windows to showcase their view of the lake, a pizza oven, and an equal number of bathrooms and bedrooms. They went on house tours and even drew up a plan for themselves.

But when it came time to actually get started, their contractor, Don Nichols of Don Nichols Building in Windham, urged them to hire an architect. He even gave them a name: Paul Attardo of Yarmouth-based Attardo Architecture and Design. The Valentines were first-time homebuilders and had never worked with an architect. In the end they were glad they went that route. “It was the best money I spent,” Ron Valentine said. “Paul was just so easy to work with. He had ideas. I had ideas. We’d go back and forth.”

As part of the design process, the architect made a 3D model of the proposed house, which the Valentines found very helpful.

Valentine was especially grateful for how Attardo helped navigate the state’s complex rules about building in a shoreland zone, which involved meetings with the local code enforcement officer, the water district, and the Department of Environmental Protection, among others.

Working on a project such as this in the shoreland zone is complicated, Attardo said. Zoning rules dictated that within 100 feet of the water a building’s footprint and interior volume could be expanded by no more than 30 percent. Adding to the complexity was that the house on the land side is quite close to a small road, creating additional setback issues.

“Each time we made a revision we had to rebalance square foot and volume calculations,” Attardo said. “It was interesting to balance the mathematics side with the aesthetic side of things. In the end we were within one cubic foot of the allowed expansion.”

For his part, Attardo said he enjoyed working with the Valentines, and appreciated their openness to new ideas.

The result is a new lake-front house with a classic, Adirondack look; a five-bedroom and five-bath home with spectacular views, high ceilings, a fully equipped kitchen, and plenty of space for entertaining. A pet peeve of the Valentines when visiting other houses was seeing that they all had the same bathroom fixtures. In this house each bathroom has unique faucets, sinks, and toilets. The Valentines also took special care with the kitchen.

“My wife is Sicilian and likes to cook and entertain,” Ron Valentine said. “The kitchen has plenty of space, and we have a pizza oven on the screen porch.”

That porch, which is separated from the kitchen by a 9-foot folding door and has removable windows, has a flat roof, leaving room on the gable end of the kitchen’s cathedral ceiling for windows that, combined with transom windows over the cabinets, fill the space with light.

The main entrance and living spaces, including the kitchen, living room and dining area, and the master bedroom, are on the second floor. There are two guestrooms and bathrooms on the top floor. The walk-in basement includes two bunk rooms, and a hangout space with games and a bar area. Underneath the screen porch is a utility space with room to store kayaks and other equipment.

A big granite fireplace anchors the living room and there is another fireplace in the walk-out basement, which can be separated from the upper floors so if the Valentines’ grown sons want to come up in the winter, they can just use the first floor.

The house is heated with a conventional propane-fired hydro-air system, with radiant floor heat.

The camp was on the site of a former marina and has an impressive fieldstone dock that goes out 50 feet and then curves left in a wide “L” shape. A deck and rails were added to the dock as part of the new construction project.

And, in a nice touch, the old building lives on in various parts that were saved and re-used.

Reclaimed wood was used to build a vanity in the basement bathroom, and vintage multi-colored 2-inch Linoleum tiles were saved and reinstalled exactly as they had looked in the original camp.

The Valentines are thrilled with their new lakeside retreat, which they now can use year-round.

“We plan to retire there,” said Ron Valentine.