All photos by Benjamin Mendlowitz 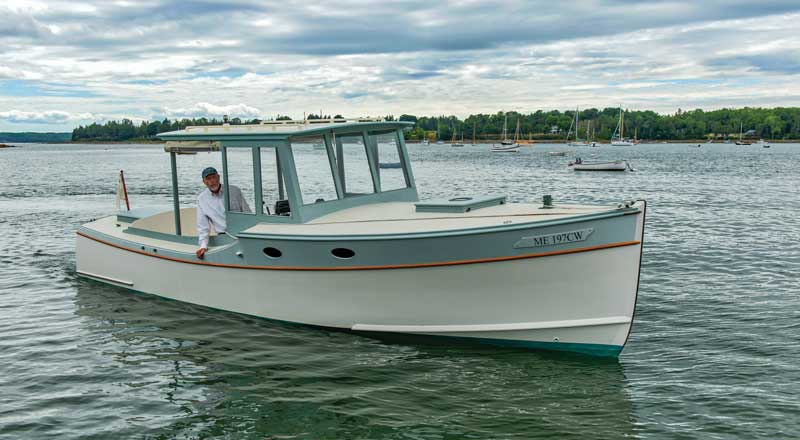 Doug Hylan is shown here at the helm of Bagatelle, built in 2014 and hull No. 1 of his Bowler design. The yard has built two sister ships since then.

When the late Jimmy Steele put a sign up on the driveway to his shop proclaiming Brooklin, Maine, to be “The Boatbuilding Capital of the World,” many of us thought such an extravagant claim pretty much hit the nail on the head. For a town of 800 people, Brooklin has a lot of boatbuilders. Furthermore, it has complimentary institutions like WoodenBoat Magazine along with its Boatbuilding School, as well as the membership website, offcenterharbor.com, that makes videos featuring the design, building, and use of classic boats. So if you go up to the Brooklin Store for a lunchtime sandwich, the guy ahead of you in line is probably a boatbuilder or someone who writes about boats, or someone about to go for a sail in one of the dozens of beautiful classics moored in Brooklin’s harbors. 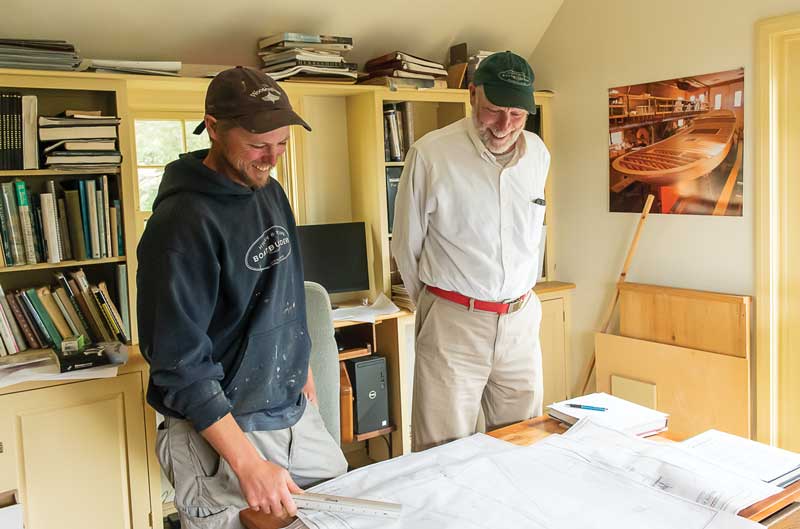 Ellery Brown and Doug Hylan look over boat plans in the yard’s office.

Among the notable boatyards in Brooklin is Hylan & Brown, a partnership comprised of Doug Hylan and Ellery Brown. Launched by Hylan 20 or so years ago, the yard stores and repairs wooden boats, and designs and builds new ones. Go pretty much anywhere along the coast and ask who’s best, yard-wise, and Hylan & Brown will be right up there at the top of the list. Their work is effective and efficient. More crucially, they have an abiding understanding of the aesthetic and structural components that give wooden boats their eternal appeal.

One of the yard’s first significant builds was the powerboat Deliverance, designed and built for Ted Okie who got the idea for a boat after reading Anne and Maynard Bray’s book, Designs to Inspire. From the building of Deliverance through the transformation of the sardine carrier Grayling into a gentleman’s yacht, Okie proved to be a loyal and valuable customer whose refined taste in yachts—along with his ability to pay for them—put a solid foundation under the yard and enabled Hylan to build boats that suited his taste. 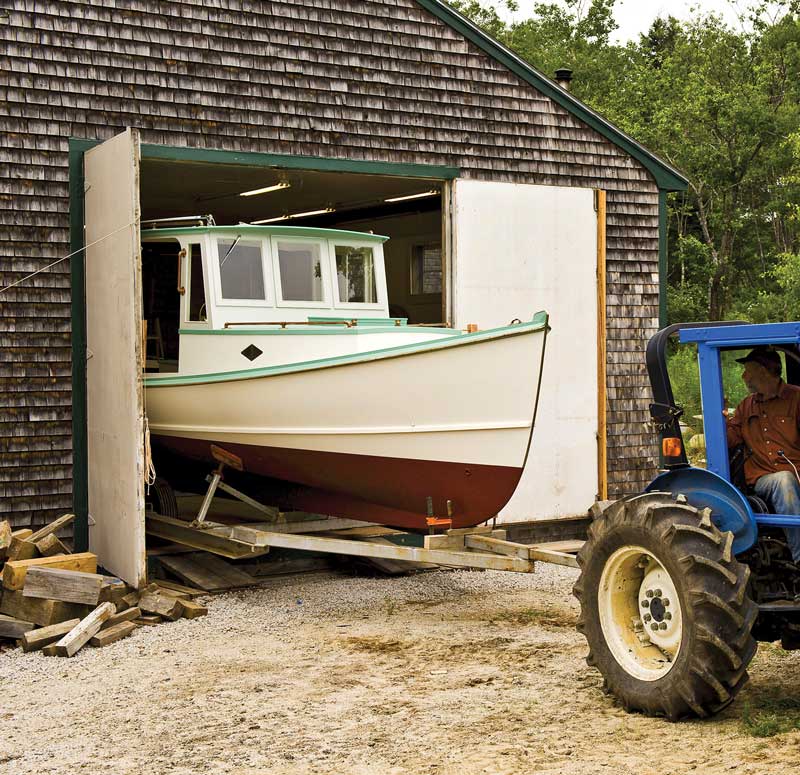 Hylan built his first boat as a junior-high-school student in Wakefield, Massachusetts, and then trundled it across a road and a railroad track to launch it in a local pond for a first sail. When he moved to Brooklin, Maine, as a potter in the late 1970s, it didn’t take him long to get started building his first boat there. Ultimately, this led to a partnership with John Dunbar on the Benjamin River. That was followed, years later, by the chance for Hylan to set up his own yard next door in 1999. The yard was called D.N. Hylan & Associates until late 2017, when the name was changed to include Brown.

Winter or summer, a visit to Hylan & Brown is worth doing. There is a main shop where the crew works on cruising-sized boats—the yard has nine employees, including the two principals. At right angles to this is a shop where some sort of wooden skiff or outboard is usually under construction. In addition to storing and maintaining about 35 wooden boats, the yard usually has one or two new builds under way. The team launched a 26-foot Bowler powerboat last July for a customer in Rockport and plans to start work this winter on an Albury runabout.

Rather than featuring a lot of colorful downeast palaver, this is a nod-and-keep-on-working sort of place, in which the sound of sandpaper on wood is louder than the voices of the men and women who build boats there.

Hylan likes it that way, and Brown does, too. When Brown came to work at the yard in early 2008, Hylan had been keeping an eye out for someone whose personality might keep the place going by easily communicating with both customers and the rest of the crew. It turned out that Brown was particularly gifted in this regard. He is as funny as Hylan, and, like Hylan, he has the rare ability to take the long view of the yard’s mission. 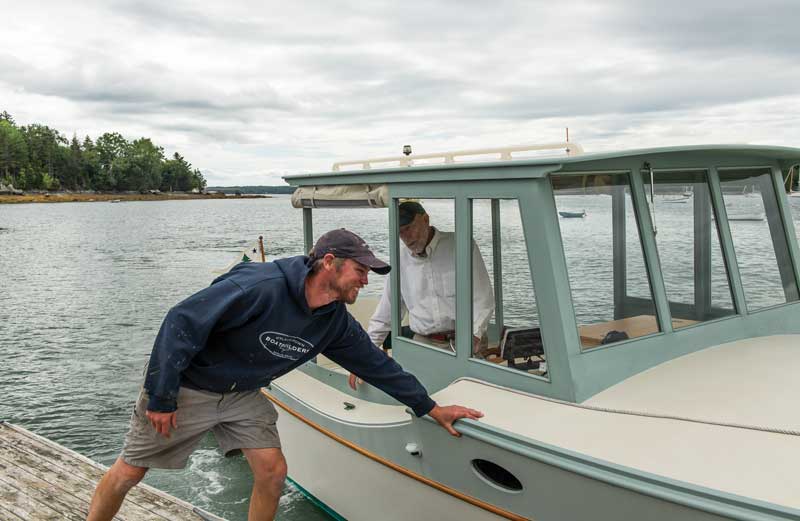 Brown, left, has become a partner with Hylan, right, in the yard, working over the years to earn his stake. Brown did not come on board with a lot of extra cash to buy a stake, so he and Hylan set up a plan by which he worked extra hours in return for stock in the company. Now Hylan & Brown seems like a full-fledged partnership with an easy sense of comradeship between the two owners.

“I believe in the value of partnerships,” Hylan said. “You get a range of skills and get more done.”

When Brown went to work for Hylan he brought with him some experience with boats on the Maine coast. His grandfather had a cottage on MacMahan Island on Muscongus Bay, and Brown spent summers there as a kid in a magical place that allowed him to run free on land and in boats. It was the kind of life that led him away from the coat-and-tie world of corporate America into a world where people did things that they loved to do with their own hands.

After finishing college at Bates, and a stint working as a deckhand aboard the replica slave ship Amistad, he enrolled in The Apprenticeshop, which was at that time located in Bath, Maine.  For Brown, The Apprenticeshop was an outstanding vocational experience that would lay a pathway into his professional life. After finishing the program, he went to Brooklin for interviews with Steve White of the Brooklin Boat Yard and Doug Hylan. He was offered a position by each but chose Hylan’s because it was a smaller yard that had just begun the full restoration of the Herreshoff yawl Aida, a restoration that would call on all the skills he had gained at The Apprenticeshop.

Brown appreciated the easy friendships that were part of coffee breaks and lunch hours. In addition, he appreciated shipwright Matt Elwell, who had worked aboard schooners in Rockland when he was in high school, for his innate sense of what looked “right” in a boat. Brown thought he could learn a lot from Elwell, and over the years that has proven to be true. 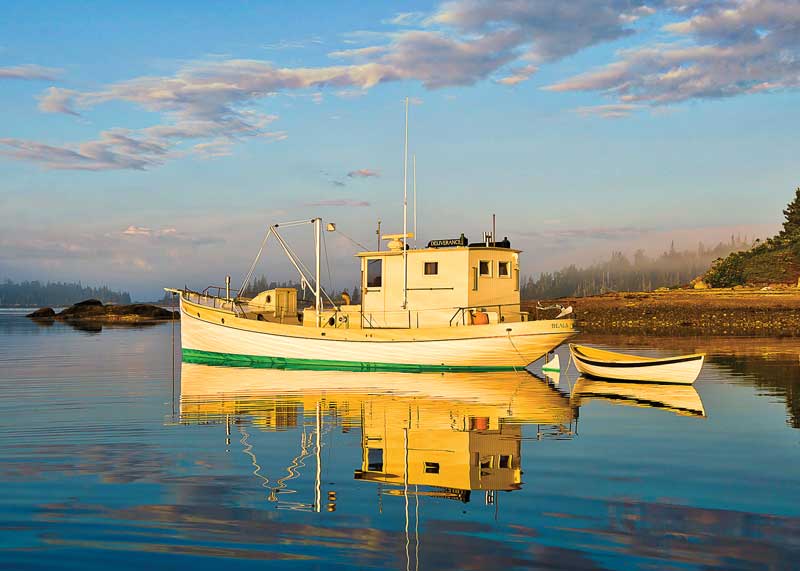 The 43-foot Deliverance, launched in 2011, was one of Hylan’s earliest and biggest design and build projects.

The yard is known for its small- to medium-boat builds and in recent years, Hylan in particular has focused on efficiency and environmentally friendly models. Recent projects have included boats powered by electric engines.

Hylan also has embarked on a side project, writing a newsletter outlining things regular people can do to fight climate change.

The yard has joined a non-profit Maine business project called “On the Pathway to 100% Clean Energy,” and pledged to eliminate all carbon emissions by 2030. This has meant installing a solar array on the main shop, which provides for all the yard’s electrical needs through the state’s net metering plan, and switching most of the yard’s lighting over to efficient LEDs. Future plans include installing heat pumps and replacing the company truck with an electric vehicle.

“We are interested in the lower horsepower end of the spectrum and honestly those are the boats people approach us to build,” said Brown.

Bill Mayher lives in Brooklin, Maine, and is one of the founders of offcenterharbor.com.