“The power of the world moves in circles

and everything tries to be round.”

The comforts of the calendar and the turning of the seasons come back home to us in autumn. It is always soothing to pick up the latest Farmers’ Almanac and look at the old woodcuts, charts, and archaic symbols whose forms change so little over the decades, and even centuries, yet whose details change considerably from one year to the next. They show change within changelessness. The Almanac is the calm recalling of the fundamental events taking place in the heavens and on the earth, peacefully and ceaselessly repeating through the eons—a companion in your flight beyond all that dies and toward all that lives forever. No wonder it rested next to the scriptures on sea voyages, pilgrimages, covered wagons, and the humble bookshelves of our immigrant ancestors. 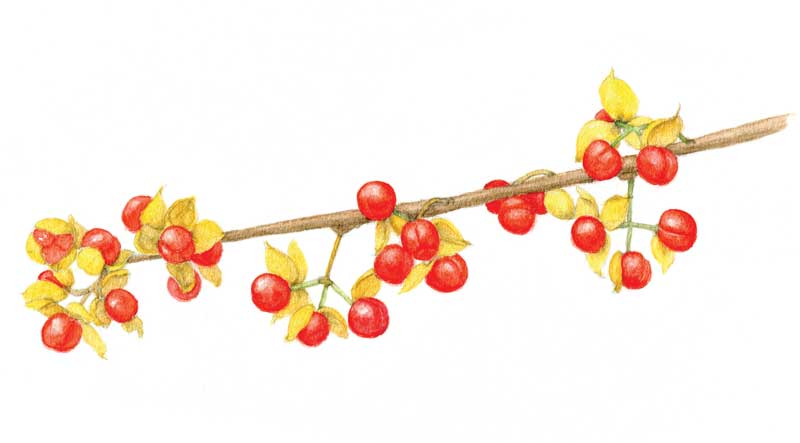 Large black-and-yellow spiders in the meadow and garden spread their dinner-plate-sized webs with the distinctive white zig-zag line and hung with the shrouded bodies of their prey. They are called, appropriately enough, black-and-yellow garden spiders (Argiope aurantia).

The fields are still bright with goldenrod of several kinds. Asters from white to blue to purple wave along the roadsides while milkweed pods are breaking open to reveal their hidden treasures of seeds carefully packed in silk. Most plants have gone to seed, with a few stragglers coming along behind.

Ever since the petals fell from the first blooms, plants have been devoting themselves to their young, feeding them with sugars manufactured by chlorophyll, sunlight and water, maturing them from tiny green germs to robust dark shiny seeds ready to fall to the ground or be carried far and wide by birds. Encoded in each seed are visions of the trees, shrubs and flowers of the future: the colors of the lupine, the aromas of the rose, the shape of the elm or linden or maple, the designs of flowers and seeds still to come.

Where the field meets the forest on the margins of human activity is where we find three vines: one noxious, one annoying, and one lovely. Vines generally grow fast and climb on other plants or structures rather than using energy to build heavy woody trunks. The noxious vine is poison ivy (Toxicodendron radicans), recognized by the old scout phrase, “leaves of three, leave them be.” Poison ivy is one of very few plants with three leaves growing from the same spot on the stem. It loves roadsides and old fencerows, and it’s gonna make you itch. Crushed jewelweed is said to relieve the itch. The annoying vine is oriental bittersweet (Celastus orbiculatus), which is aggressive and can overtop and kill a large tree. This is somewhat mitigated by the beautiful orange berries people gather in the fall for decorations. Please don’t; it spreads the berries. The third vine is woodbine or Virginia creeper (Parthenocissus quinquefolia), a more slowly growing vine of luxuriant foliage with groups of five toothed leaves which turn a breath-taking shade of red in the fall. Woodbine is a member of the grape family and its purple berries are loved by birds and other critters.

The cricket on the hearth is a universal symbol of domestic comfort and security from China in the East to Europe in the West; and it has been so for thousands of years. Perhaps this is because crickets flourish in open fields and long grass. Where there are open fields and long grass, there are grazing animals; and where there are grazing animals, there is food for omnivorous upright social primates like ourselves. Add a warm hearth with a cricket chirping on it and you have the very picture of domestic comfort and security. The feeling of walking through the garden on a sunny autumn afternoon or going out on a starry Fall evening and hearing the singing crickets is joy and contentment.

Making a trail through second-growth coastal woods untouched for a century or more, as your commentator has been doing recently, can be an enchanting experience. Even here in downeast Maine we spend much more time looking at our boreal forests from the outside than from within. Once within, we become part of the living woodland. Sunlight is bent and tinted green by the high canopy of spruce, fir and birch. The sharp calls of a pileated woodpecker or yellow-shafted flicker are amplified by the silence to echo among the towering trunks. A nudge with a boot toe turns a fallen log into soft peat, releasing the aroma of soil being born. Creatures rarely seen elsewhere make startling appearances, such as the glossy black white- spotted sawyer beetle. It lands on a stump, resting from its labors of laying eggs on the bark of dead or dying spruce, fir, or pine, where its larvae burrow into the wood and can be heard “scritch-scritching” under the bark.

All around we see trees in all stages of life and death: tiny seedlings looking so frail any day they might fail, ramrod straight saplings waiting for some sky to open up so they can reach the light, majestic patriarchs and matriarchs overarching all, and far below softly rotting dead trunks giving themselves up to make soil to nurture new sprouts sprung from their own seeds. It is hauntingly beautiful in those woods because they are left to themselves, undisturbed and unmolested, and thus they make a world sufficient in every way for all the creatures who live there. 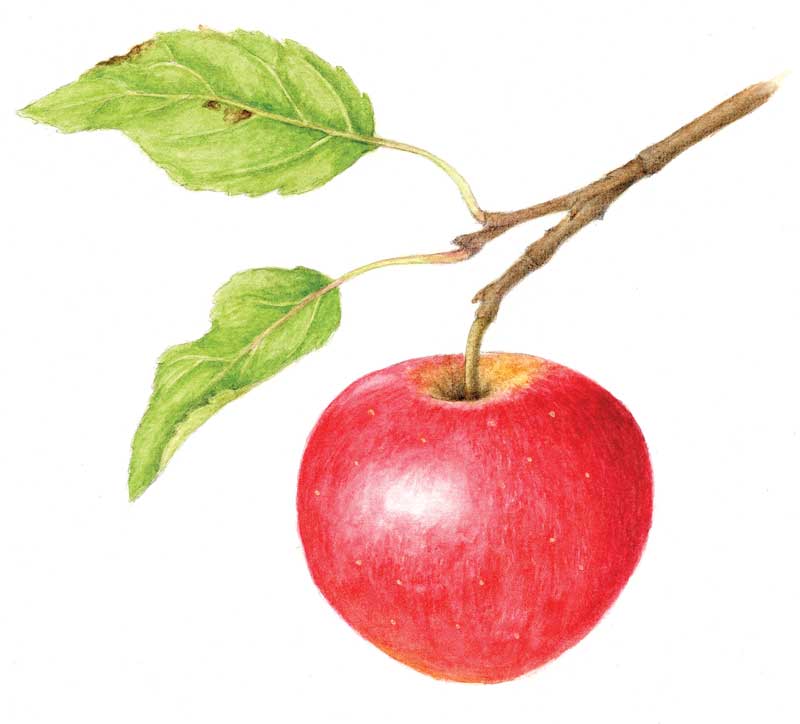 After the weekend’s heavy rains washed out roads and driveways and flooded low-lying areas, we opened the back door to cool sparkling sunshine and the sound of Carding Brook rushing down out of the wood-lot, through the old dam, through the barnyard, filling the pond, and then spilling out into the Benjamin River. The sound bathed us in a sense of relief because it meant that our drought was clearly over and the soil soaked and groundwater replenishing.

We made it through the Harvest Moon without a frost and the old-timers might say that we will get another couple of weeks without a frost, at least until the next full moon. Frost or not, the red maples are red, and the old sugar maple down by the road into the farm is slowly divesting itself for its coming dormancy by dropping its bright orange, red and yellow costume like an elderly ecdysiast who still likes to sleep in the buff.

Out walking this time of year it’s easy to see there are apple trees all around. Along roadsides, in fields, in the woods: they seem to be everywhere. Those who know about these things say that the immigrants from Europe who settled here brought apple scion wood and even seedlings with them and planted them as soon as they could, mostly for cider—what we would call hard cider, a nourishing and refreshing drink that is easy to brew and can be stored in the cellar all winter long. Pumpkin and squash, corn and beans were already growing here when Europeans arrived, cultivated by the First People who shared them with the new arrivals.

We are surprised by the sunny faces of a pretty good crop of dandelions in bloom. They have been rather shy since their big bloom in May, but now they are putting on another show before the frosts put them to sleep until spring. It’s not unusual to see other late-bloomers about now, including an occasional lupine, and even a daisy now and then.

Those of us who live along the Maine coast probably know someone who has “saltwater in their veins,” as the old saying goes. In fact, we all do, since blood is essentially saltwater with a few proteins floating around in it. So the call of the sea is very deep within us. The Bible says that the sea was here from the beginning of the world, and many cultures recall a great flood from which the world emerged. Aye, the whole human race has saltwater in its veins.

It’s one thing to identify different plants through the seasons because plants tend to stay in one place and look pretty much the same in spring, summer and fall. You can pick a leaf or flower and take it with you to compare with your guide books or show to friends. But identifying birds is another thing altogether. They move around a lot, and they may look very different in different seasons. Your commentator can name many of the more common birds, even the seasonal visitors. But, right now the “confusing fall warblers,” as Peterson’s field guide calls them, are passing through on their migration from their boreal breeding grounds, and I am stumped. These warblers are lovely little birds, though they don’t seem to warble very much, maybe because they still have a long way to go and are saving their strength for the journey. These little balls of fluff are headed for Central and South America to spend the winter in Margaritaville, and who could blame them? Having just finished reading Helen Macdonald’s Vesper Flight it is easy to imagine the soft, nighttime whisper of billions of wings, not just over Maine but over the whole northern hemisphere.

Seedpods to carry around

From Fanny Fern: “Little things are the hinges of the universe.”