Maine Lake Ice Company shipped ice all over the world 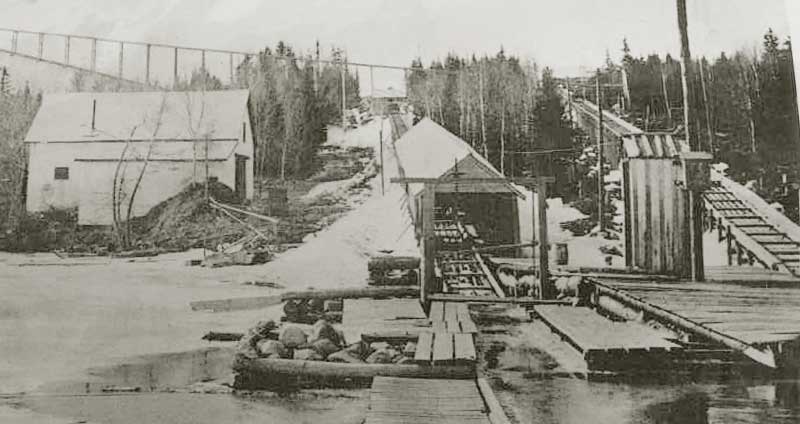 To a boater casually passing by, the two stone piers nestled along the shore of Eggemoggin Reach look like little more than a bunch of granite blocks that have slowly given way to time and neglect. Located in a sheltered cove not far from the Deer Isle Bridge, one of the piers has substantially tumbled into the ocean, while the other is working its way there.

These piers, however, are more than simply piles of cut granite. They are the remnants of the Maine Lake Ice Company, an important business that operated from 1900-1916 with dozens of workers, huge storage buildings, and an elaborate conveyor belt system, served by some of the largest wooden schooners—with four and five masts—of the day.

The ice company harvested ice from nearby Walker Pond, and transported it on an intricate runway system up and down a hill to the shores of Eggemoggin Reach, some 2,000 feet away. There, the blocks of ice, or “ice cakes” as the company called them, were loaded onto awaiting ships, packed in straw or wood chips, and transported to faraway places, primarily for use in iceboxes to keep food cold. The Baltimore-Washington region was the primary market, but it’s been written that the ice was transported as far away as the Bahamas, the West Indies, South America, and possibly even India. 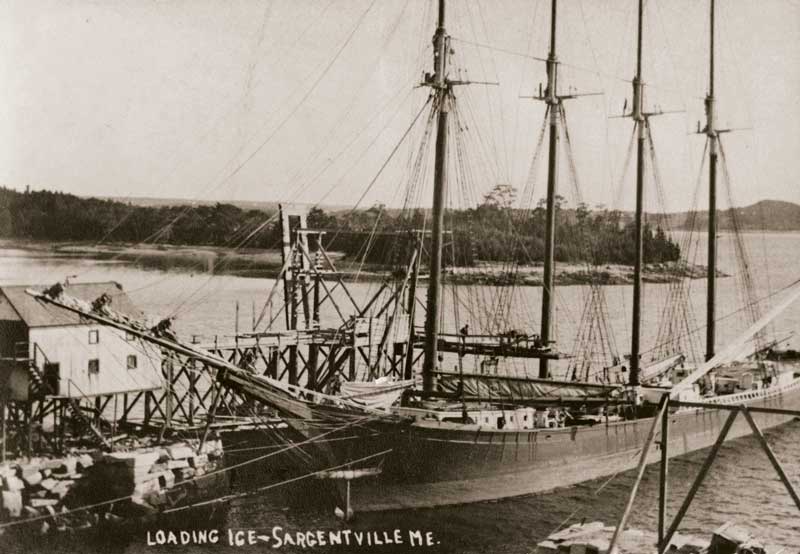 Schooners delivered ice to U.S. markets on the East Coast as well as points as far away as the West Indies, South America, and possibly even India. Here a schooner is tied up at the dock waiting to be loaded with ice. Photo courtesy Penobscot Marine Museum Collection

The remains of the piers also serve as a reminder of what was once a booming Maine industry that saw thousands of workers each winter cut blocks of ice from rivers and lakes to be shipped to points in the United States and around the world. Maine’s ice industry thrived between roughly the middle of the 19th century and the end of World War I, said Earle G. Shettleworth Jr., the Maine State Historian. At the time, ice was one of several natural resources found in Maine that were shipped far and wide, but that eventually declined as times changed. Demand for Maine granite diminished with the rise of steel-frame and concrete buildings; and the timber industry waned with the shift toward wood from the Upper Midwest and the Pacific Northwest, Shettleworth said. You can thank electric refrigerators for the ice industry’s demise.

“So many ice companies proliferated in Maine until refrigeration froze them out, so to speak,” Shettleworth said.

The Maine Lake Ice Company was formed in 1899 when a Pennsylvania businessman saw there was money to be made by setting up an ice-harvesting business on Walker Pond. In a pamphlet, the company wrote that “Lake Winneagwamauk,” another name for Walker Pond, was “the finest natural ice plant in the world.” 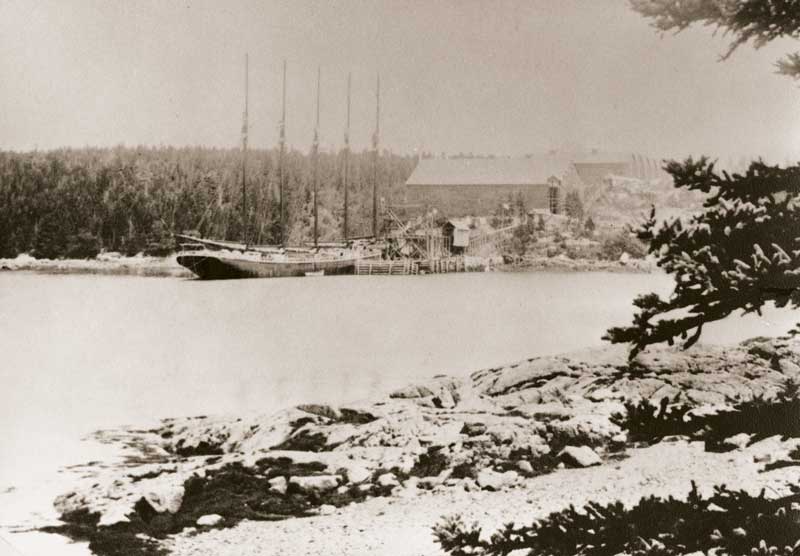 The ice was carried far and wide by some of the largest schooners of the day, such as this five-masted vessel, thought to be the Fannie Palmer. Note the huge ice-storage sheds in the background. Photo courtesy Penobscot Marine Museum Collection

The ice company, or the “ice works” as it was generally called, was quite an operation. Each winter, men cut grooves into the ice with horse-drawn plows to mark where it was to be cut. Once the blocks of ice were taken from the lake, they were moved on conveyors, or “runways,” to storage buildings and covered with hay as insulation so they could be shipped year-round. The two largest storage houses were 57,000 square feet and 44,000 square feet, and 50 feet high. A large engine house was equipped to generate power for the conveyors and other equipment. When operating at full steam, the operation’s main runway could transport up to 24 million pounds of ice in 10 hours. 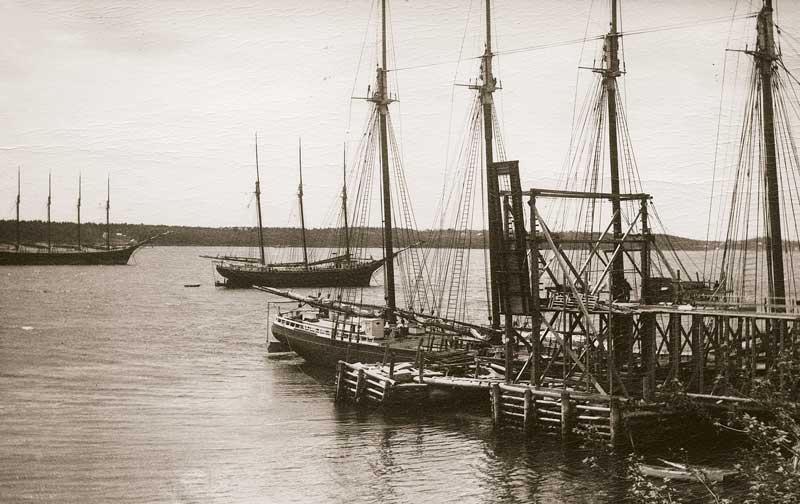 The ice was covered with hay in huge storage buildings, allowing it to be shipped year-round on vessels that sometimes waited in line to be loaded. Photo courtesy Penobscot Marine Museum Collection

When the time came to ship the ice, it was moved from the storage houses on a conveyor belt down a hill to Eggemoggin Reach and loaded onto ships stationed in shallow waters at the piers. By some accounts, ice-laden ships journeyed south once or twice a week, all year long. There must have been scores of ships that stopped by the piers through the years to keep the ice moving. 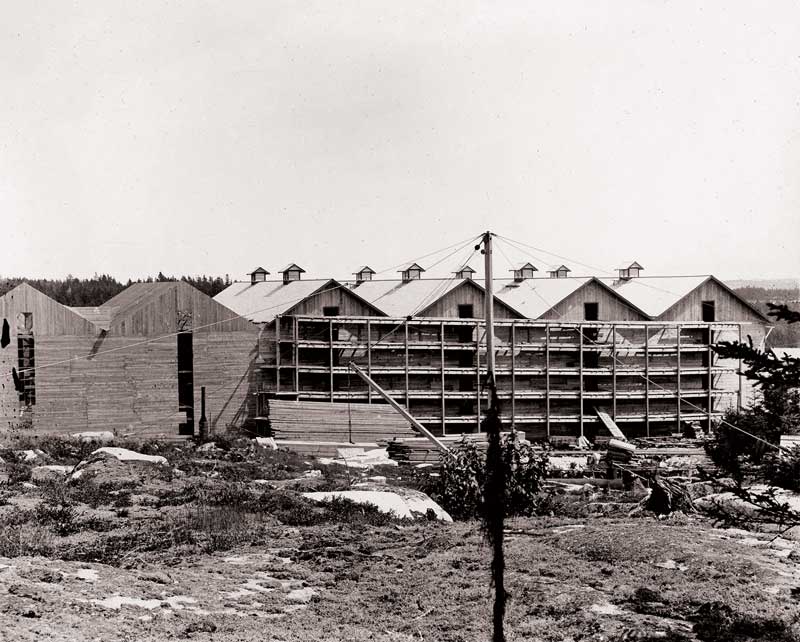 Historic photos show just how big these monster vessels were; some were over 300 feet long with a carrying capacity of more than 2,700 tons. Among the well-known five-masted schooners that carried cargo from the ice works piers were the Fannie Palmer, the Gardiner Deering, and the Mary F. Bennett. Other vessels included the Albert T. Stearns, the James W. Paul Jr., the El Dorado, and the Clarence Venner.

Lifelong Brooksville resident Berwyn Peasley, who’s 83, has a binder full of photos from the ice works operation that he’s collected over the years. (Peasley has about two dozen thick three-ring binders of historic photos from all over Brooksville.)

When he looks at the photos, he marvels at the vast number of huge schooners that transported ice through the local East Penobscot Bay waters during those 16 years. And he’s further amazed at the stories of how a local captain, Bert Chatto, piloted the schooners out of Eggemoggin Reach to the waters south of Islesboro; there, his job done, Chatto would drop over the side into his peapod and row 15 miles back to the reach, no matter the conditions or time of day.

“It intrigues me,” Peasley said, shaking his head as he looked at a photo of a five-masted schooner at the pier, ready to be loaded with ice. “We had a lot of industry in town at that time.”

The Penobscot Marine Museum also has old photos, donated by the late Catharine Sargent Marston, who was born in 1901 and grew up in Sargentville, a couple of miles away from the ice business. Marston’s daughter, Diana Wood, has become interested in the old ice works in recent years. Given the scale of the operation and size of the ships, it must have been quite the business, she said. 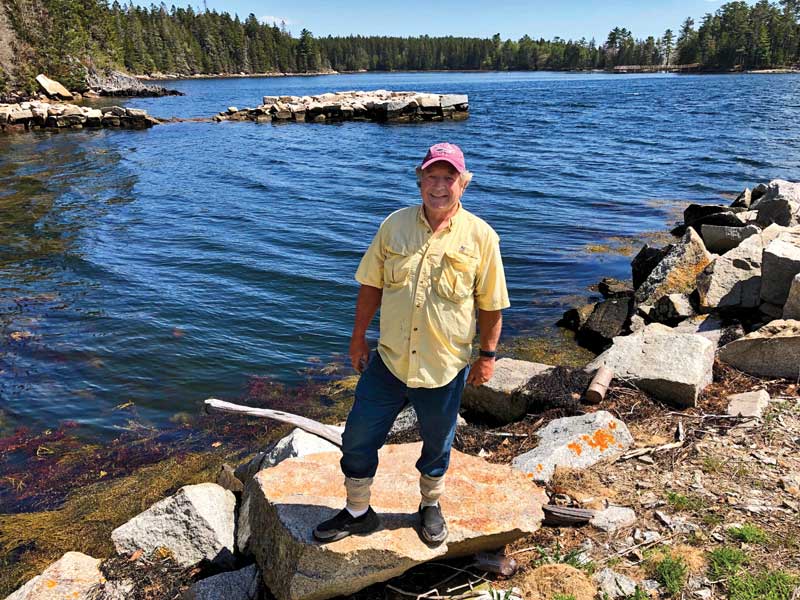 When he was growing up, Dick Gregor’s grandmother used to talk about how ice was shipped from Eggemoggin Reach the world over. Gregor is shown here standing on the remains of one of the ice company’s two granite-block piers, with the remnants of the second pier behind him. Photo by Clarke Canfield Other than the piers, there are few outward signs around today of what was once a successful enterprise. When the ice company shut down in 1916, the buildings and runways were dismantled, and the engines, generators, steel scrap, and lumber were salvaged. Small local ice harvesting continued on Walker Pond for another few decades, but the era of large-scale commercial ice harvesting had come to an end.

Today, you’ll occasionally see young people pull up to the piers in small boats and jump off the structures when the tide is right. And the old granite foundations that supported the Maine Lake Ice Company’s storage buildings and conveyor-belt runways remain.

Dick Gregor, who lives in Brooksville and is a member of the Brooksville Historical Society, set out last spring to try and find the old foundations. The historical society has various old ice-harvesting tools—ice tongs, a large ice saw, an ice froe, ice crampons—on display in its building. Growing up, Gregor heard his grandmother talk about the ice works and how local Walker Pond ice was shipped as far away as India. So he was thrilled when he and a couple of others who had joined him were able to find their way to the old piers through thick woods with no marked trail. Along the way, they stumbled across the ice company’s storage building foundations, now pretty much hidden from view by trees, grass, and other vegetation. He was impressed: “It looked like something from ancient Rome.”

And like ancient Rome, it’s history, gone but not forgotten.

Clarke Canfield is a longtime journalist and author who has written and edited for newspapers, magazines, and The Associated Press. He lives in South Portland with his wife.