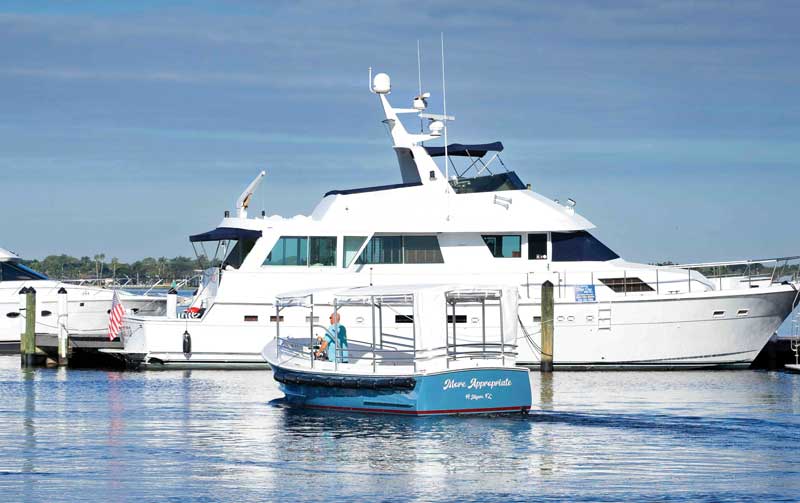 Atlantic Boat has found growing interest in its launches from buyers in Florida, such as a company in Fort Myers that operates its vessel as a water taxi. Photo courtesy Atlantic Boat

Atlantic Boat Company has long been known for its recreational, work, and commercial vessels built in the style of the classic downeast lobsterboat, primarily for buyers in New England and New York.

The boatyard is now getting a boost from its line of yacht club launches and water taxis that—while based on the same hull as its line of lobsterboat-style Duffy vessels—look quite different.

Orders for the 26-foot boats, which serve as shuttles, taxis, or workboats at yacht clubs, resorts, and in coastal communities, have picked up in the past few years. The vessels have been sold not only in New England, but also to several places on both the Gulf and east coasts of Florida.

The growing interest has allowed Atlantic Boat to tap into new markets and streamline production. The yard now has a dedicated team that builds the launches throughout the year—rather than sporadically as orders trickle in. That team is expected to build at least four new launches by the end of 2023, a number that Atlantic Boat President and Chief Operating Officer Alex Loer expects will grow.

The yard plans to deliver at least four new launches by the end of 2023, and would like to build seven or eight of the vessels each year in the future. Photo by Clarke Canfield

“In the big picture, this is a very positive thing,” Loer said as he walked through Atlantic Boat’s production facility, located on the shores of Herricks Bay in Brooklin. “It’s been nice to make inroads outside of our traditional area, because it’s opened up some doors for us to keep production continuous. The whole southern market has opened up. We’re pretty bullish on it.”

Loer first approached Atlantic Boat about building a launch-style boat using the yard’s traditional downeast style in 2005. He had a working relationship with the company at the time, but was not an employee.

Using Loer’s design, Atlantic Boat began manufacturing some pre-ordered launches and water taxis using its Duffy 26 hull. Since the 26’s inception in 1986, the yard has sold more than 50 of them as commercial lobsterboats, tow boats, charter boats, and pleasure boats. 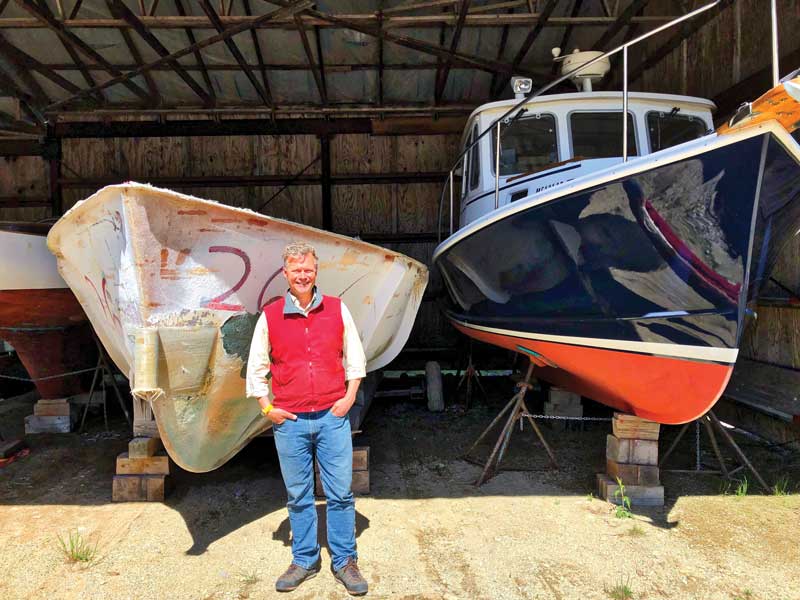 The launches have the same hull as Atlantic Boat’s traditional downeast style boats. Company President and COO Alex Loer stands in front of the mold for a 26-foot hull that will be finished as a launch. Next to it is a finished version of a traditional 26-foot Duffy. Photo by Clarke Canfield

But the similarities between the launches and the traditional Duffy 26 end with the hull. Rather than having a closed-in roofed cabin, the launches are open, with a seating capacity of 24 passengers and a side console where the operator steers with a vertical tiller with a push-pull cable linkage to the rudder arm. The launches are powered by an inboard 80-horsepower Yanmar diesel and a have top speed of about 14 knots; the traditional Duffy 26 model has a six-cylinder engine (either 260 or 315 horsepower) with a top cruising speed of 25 to 28 knots. The launches can be used as basic no-frills utility boats, but some customers want the fancy versions with canvas sun canopies, side enclosures, and teak finishes.

Customers are using the launches for a variety of purposes, such as a water taxi to take passengers between restaurants and hotels in Florida, a shuttle boat at swanky resorts, or as a service and transportation vessel at yacht clubs. In the beginning Atlantic Boat typically sold one or two of them a year, and only then sporadically. But as it taps into new markets, that number has grown.

“It’s the same style and the same boat as the downeast-style boat, but we’re adapting it for new applications,” Loer said. “I would like to do seven or eight a year.”

The yard has continued to sell the launches in New England, but it’s also found new markets up to 1,700 miles away. One customer in Naples, Florida, uses an Atlantic Boat launch to shuttle passengers between waterfront restaurants, bars, and hotels.

The Boca Raton, a sprawling luxury resort and beach club in Boca Raton, Florida, has bought two of the launches, named Romeo and Tango, and has a third on order that will be delivered this fall and named Bravo. The resort uses the boats as a water shuttle service between its expansive harborside property and the exclusive beachside property, which are separated by Lake Boca and the Intracoastal Waterway on Florida’s east coast. 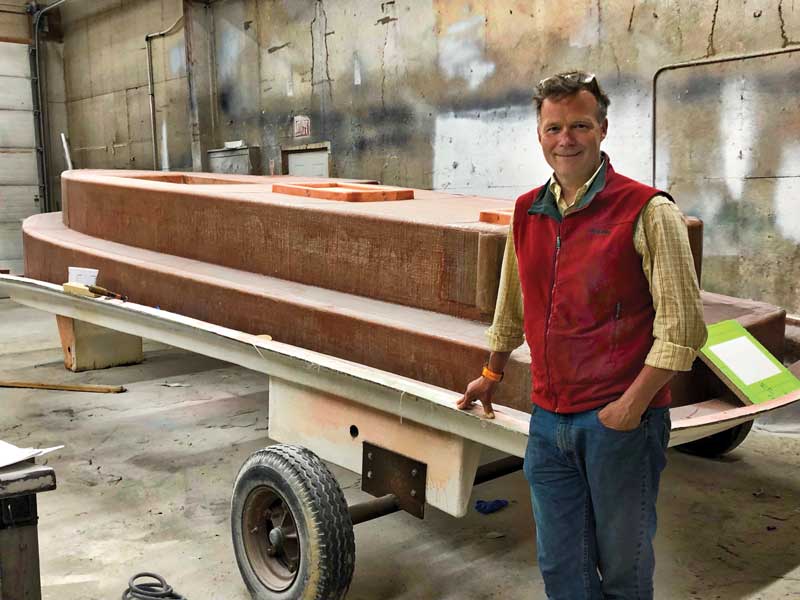 Loer, shown here with an upside down mold for a section of the launch, first approached Atlantic Boat in 2005 about building a launch-style vessel. At the time, he had a working relationship with Atlantic Boat but did not work there. Photo by Clarke Canfield

The launches are an “elegant and fun transportation offering” to guests, said Tyler Giolarmo, the general manager and dockmaster at The Marina at The Boca Raton. The boats have provided the resort with Coast Guard-inspected passenger vessels that aesthetically live up to the resort’s high standards, he said. They are tough enough to take the beating that comes with running eight hours a day, every day, yet are still elegant and beautiful with “classy teak finishes for a timeless look,” he said.

“Our guests have loved the boats so far, often comparing them to the Jungle Cruise at Disney World,” Giolarmo said. “They appreciate how nimble, swift, and quiet these Duffys are in shuttling them between properties. We do not offer these boats for private charter as of now, however, we constantly get requests for them.”

Jon Chase is the team leader for the Atlantic Boat production team that manufactures the launches. The boats are appealing because they have the durability and toughness of a downeast-style boat, but with customized amenities to give them high-end touches.

“These aren’t cookie-cutter boats,” he said. “Plus, there aren’t a lot of water taxis and excursion boats that hold up to 24 passengers.”

The launches are part of Atlantic Boat’s strategic plan to expand its markets for all of its vessels, said Loer, who was hired as Atlantic Boat’s president and chief operating officer in March.

“This is an example of what we’re trying to do,” Loer said. “Find new markets, find new niches for our boats.”

Clarke Canfield is a longtime journalist and author who has written and edited for newspapers, magazines, and The Associated Press. He lives in South Portland with his wife.