Alan Magee’s Conversation with the World 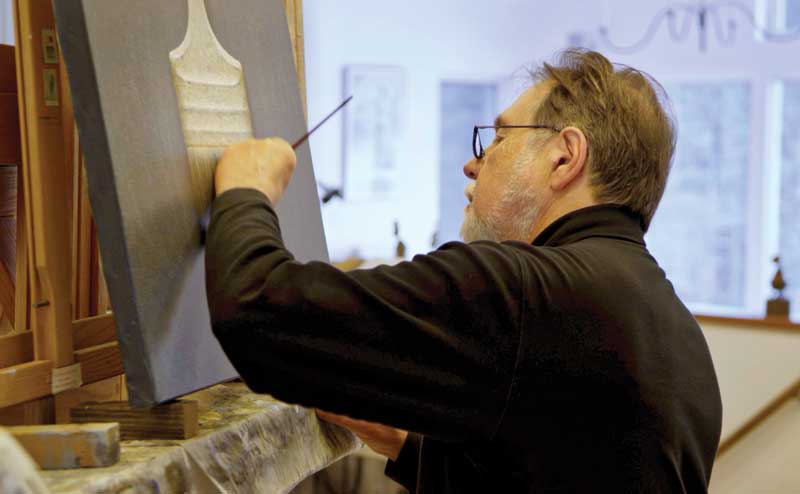 In this still from the documentary Alan Magee: art is not a solace the artist is working on the painting Paragon. Photo ©️2019 Monika Magee

The documentary Alan Magee: art is not a solace opens with a disquieting sequence. As the camera moves through a battered abandoned building, Magee’s monotypes of pale and vulnerable scarred visages are projected on stained walls, accompanied by jarring audio reports and TV clips from the first Gulf War in 1990.

That war compelled Magee to create these dark empathetic portraits. He felt he had to respond in some way, and chose to represent anonymous innocents, their eyes filled with a kind of terrible resignation. It is no surprise to learn that he counts the German artist Käthe Kollwitz (1887-1945), who is known for her powerful portraits of working-class people, among his artistic heroes. 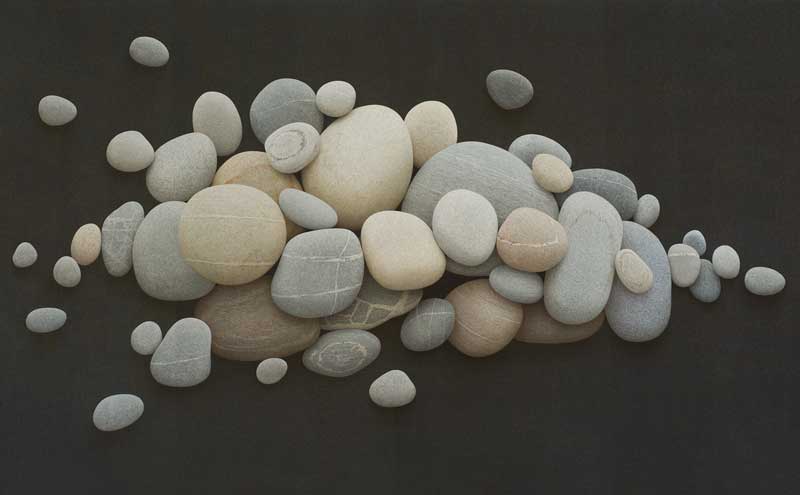 Perhaps best known for his astonishing large-scale paintings of beach stones, Magee’s subject matter is wide-ranging. He also documents all manner of objects, from firecrackers and paint-covered razor blades to wrenches and carburetors. In nearly every case he sets off the chosen items on a monochromatic background, giving them a special presence while adding to their visual resonance.

He also continues to conjure the haunting countenances of wars still taking place in the world. “The monotypes are meant to encapsulate a vast span of time,” he notes, “not call up a particular era.” One of the most remarkable scenes in the documentary Art is not a solace shows him making one of these prints, the face emerging apparition-like from the inked plate.

Later in the film, Magee is shown painting objects in the quiet of his Cushing studio. With a small brush he painstakingly adds detail to a rendering of a coil of metal and a paintbrush. Watching him in action is like looking over the shoulder of a master illuminator from an earlier century.

Among the artist’s most recent work is a series of large-scale acrylic paintings of military helmets. Magee’s fascination with the subject started in childhood when he made detailed drawings of suits of armor. He never lost his interest in them: For more than 40 years he has visited armor collections, in Austria, Germany, Poland, and at the Metropolitan Museum in New York City.

While working on these paintings, Magee marveled at the helmets’ “seamless fusion of human artistry with the age-old instinct for organized violence.” That “marriage” of craft and military power goes on, he notes: the helmets are not far removed in their purpose “from B-2 stealth bombers and Reaper drones.”

Magee brings all his realist powers to bear on rendering the contours, color, and artisanship of the helmets. Their metal surfaces reflect light; some are shown in profile. They are at once brutal and beautiful. Painted during Covid, they align with the zeitgeist, “that we were all guarded and shielded in our protective masks or staying home in our houses,” Magee explained. 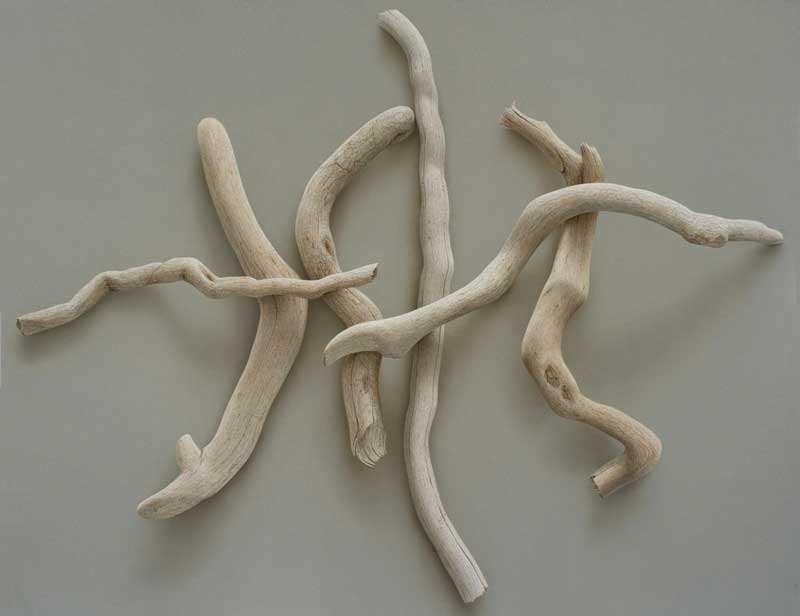 Driftwood collected by Magee and his friend writer, Barry Lopez, on the Oregon coast in 2005 inspired this painting. Motet, 2019, acrylic on canvas, 46" x 58". Photo ©️Alan Magee

Another recent series of acrylic canvases features small pieces of driftwood carefully composed in overlapping clusters. Magee and his friend, author Barry Lopez (1945-2020), collected the driftwood along the Oregon coast around 2005. Pacific cedar and redwood are harder than the wood on Maine beaches, Magee said, so the pieces become “elegantly smoothed and rounded like the stones here” in Maine. He has used driftwood pieces as limbs in his sculptural figures.

The curved and twisted shapes appear to glow in tones that include warm and cool grays, white or brown, and even a touch of maroon from the redwood showing through. Titles like Motet and Canticle lend a sacred quality to the paintings. 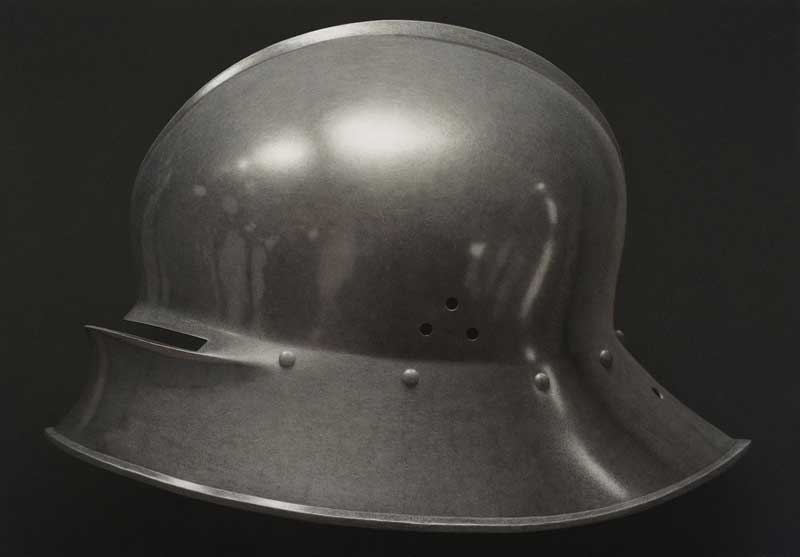 One of a series of large-scale paintings of military helmets. Helmet XII, 2021, acrylic on canvas, 50 x 72 inches. Photo ©️Alan Magee

Alan Magee: art is not a solace, which was directed by P. David Berez and David Wright, is a brilliant portrait of the artist, highlighting his influences (which include horror films and Ed “Big Daddy” Roth’s hotrods) while touching on the extraordinary range of his work: paintings, prints, puppets, tapestries, films, and music.

The last-named category may surprise Magee followers: He is an accomplished guitarist and has a strong voice—and he writes songs. After the 2016 election, he wrote “Singing in the Dark Times,” inspired by the poem “Motto” by Bertolt Brecht. With lyrics like “When malice is a virtue, grace a sin,” the song is bleak in its outlook, yet it ends on a positive note: “there will be singing in the dark time.”

One night at the Martinsville Grange in coastal Maine, the singers Marian Mackins and her husband Gabriel Donohue invited Magee to perform the song. After finishing, an artist friend notified him that Supreme Court Chief Justice John Roberts and his family were in the audience. Magee was pleased to learn that the Justice’s daughter had sung along.

How did Magee end up in Maine? 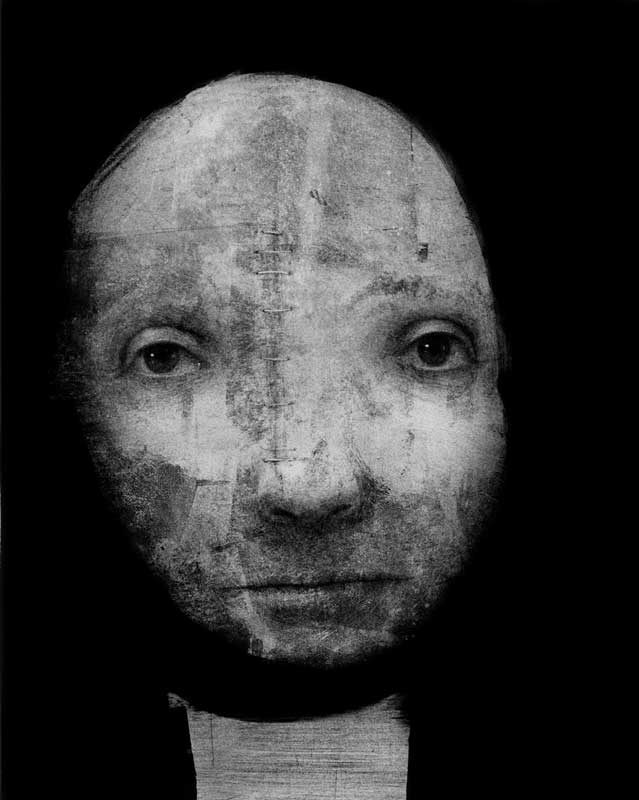 Amazonia (for Padre Ricardo Rezende), 2011, monotype with watercolor and black pencil, 14" x 11". Padre Ricardo Rezende is well known in Brazil as a defender of the oppressed indigenous people of Amazonia. Photo ©️Alan Magee As he recently recounted, one day his first-grade teacher showed the class a map of the United States. The teacher pointed out where the students lived, in Bucks County, Pennsylvania, but the young boy’s eye moved north and east, to Maine, sticking way out at the top of the East Coast, and he said to himself, “I think I’d like to go there.” The idea of Maine and New England “had a little bit of mystery.”

Magee went on to study art in high school and then at the Philadelphia College of Art. While at the latter he started building a career as an illustrator, his often-surreal images appearing on the covers of major magazines and many books. He also married his high school sweetheart, Monika, which led to an extraordinary partnership in life and art.

After about 10 years of full-time illustrating, the hustle of freelance life began to wear thin. The Magees started to consider an escape and Maine returned to the radar. A big fan of singer-songwriter Gordon Bok, Magee wrote him to ask for advice about finding a place. A Camden resident and “responsible correspondent,” Bok wrote back to recommend his hometown as a good place to start. The couple took his cue and moved there in 1976.

Magee felt relief in putting some distance between himself and the world of illustration. He loved the work, but it was a little overwhelming. At the same time, he had the urge to step back, to enter “a quieter place.” He also hoped to develop as a painter.

While the city jobs didn’t stop—which was good, it was income—Magee found new time to devote to easel work. Within the first year or so, he began the series of stone paintings that would establish him as one of the country’s preeminent realists.

Magee discovered the stones in a roundabout way. He and his wife were hosting a student from the Summer Harp Colony of America, the renowned school founded in Camden by Carlos Salzedo in 1929. One day she took them to her favorite place, Pemaquid Point, and the die was cast. Those stones provided “the bridge” out of illustrating.

Magee considers his long relationship with the stone beach at Pemaquid Point as the closest he has come to a meditative or spiritual practice. “I’ve felt that they held a message for me and that I was there to learn from them.” Captivated by their beauty he felt “implored to slow down—to comprehend the pace and expanse of time that they embodied.” Exploring Paleolithic stone arrangements in England and Scotland in the 1980s and ’90s helped him to understand that the epiphany he had experienced on the coast of Maine was, in an instinctive way, connected to a practice reaching back to prehistory. “When painting the stones I try to convey what I’ve seen and experienced—with the full understanding that each viewer will bring their own complex and unique life to the painting.”

The Magees lived in Camden for three years. They liked the town; they made friends and joined the Maine Organic Farmers and Gardeners Association, going to the Common Ground Fair in the fall. At the same time, they had been renting a place on Monhegan in September and got to thinking a more rural spot might suit them better.

On the first day of looking, the couple drove past a house in Cushing and thought it fulfilled their vision. Speaking to a realtor they discovered the place was coming onto the market. They looked at it the next day and soon bought it. 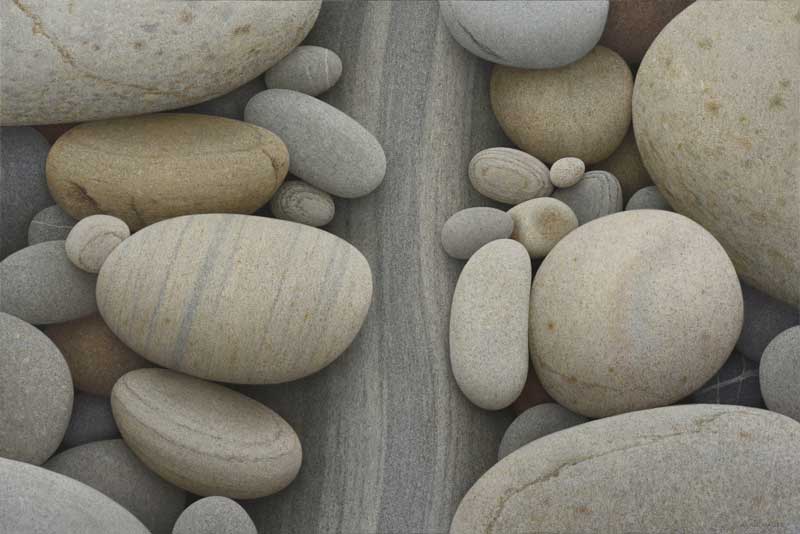 Cushing turned out to be something of an artist’s enclave. Painters Lois Dodd, David Vickery, Nancy Wissemann-Widrig, and John Wissemann live nearby and it’s only a couple of miles to the Olsen House where Andrew Wyeth found his muse. “It’s wonderful to have them here and when we see them, we catch up and we’re right where we left off,” Magee said.

The home on Pleasant Point Road looks out on Maple Juice Cove, which opens onto the mouth of the Saint George River, across from Port Clyde. Magee’s studio is a well-lit space filled with the accoutrements of his art-making: printing press, easels, canvases, paints.

These days, Magee is helping to promote the documentary, which in its initial roll-out faced some pandemic challenges as theaters closed. The title of the film comes from Leo Tolstoy’s 1896 book, What Is Art: “Art is not a pleasure, a solace or an amusement; art is a great matter.” Paradoxically perhaps, Magee’s work often offers solace as well as insight into the mind of a brilliant creative individual.

Magee acknowledges that the world beyond Cushing continues to deliver its gut punches—“bombshells” he calls them, apologizing for the term—on a daily basis. He is especially appalled by the amount of lying and how people can ignore an outrageous falsehood “that a decade ago would have ended a career.”

All the turmoil provides fuel for his art—both for the sublime vision of stones and driftwood and the somber images of unsettled faces and helmets. “Art does not aspire to entertain. It aspires to converse,” his friend Barry Lopez once said. Magee is carrying on a conversation through his art that never ceases to surprise and enlighten.

Carl Little curated three shows on view through October 2022: “Picturing Penobscot Bay” at
the Penobscot Marine Museum; “The Art of Monson: A Bicentennial Celebration” at the Monson Arts Gallery; and “Clark Fitz-Gerald: Castine’s Celebrated Sculptor-in-Residence” at the Castine Historical Society.

Alan Magee is represented by Dowling Walsh Gallery in Rockland and Forum Gallery in New York City, which will be presenting a two-person show of his and Linden Frederick’s paintings September 22-November 5, 2022.

Film: Learn more about Alan Magee: art is not a solace at www.alanmageefilm.com and www.bullfrogfilms.com. The film will be screened at the Lincoln Theater in Damariscotta on August 26, 2022.