By Rob McCall
“Summer is the time when one sheds one’s tensions with one’s clothes, and the right kind of day is jeweled balm for the battered spirit. A few of those days and you can become drunk with the belief that all’s right with the world.” —Ada Louise Huxtable, 1921-2013

Your first canoe trip, your first campfire songs, your first s’mores, your first cup of coffee, your first kiss: that is what summer camp meant to this old-timer. Not just musty cabins, meals at plank tables, bug-juice, Kumbaya, and poison ivy, but also the first taste of a profound love and reverence for Nature and the first inkling of how much there is to know about her and just how deeply she could draw you in, and love you back. Summer camp has been the catalyst unleashing the juvenile energy, curiosity, and passion for nature of countless thousands of now-grown-up biologists, teachers, preachers, gardeners, homesteaders, and environmentalists who spend their adult days working to heal the planet and its creatures.

Come summer, children pour out of the busy cities and suburbs into some faraway clearing in the woods by the water to sleep on bunk beds, eat camp food, sail or paddle the waters, carry on the old traditions, and learn the latest games and songs of Camp Gen-Air-Ric, and there find a joy and a freedom they are loathe to leave behind when camp is over and summer ends.

Summer camp is a taste of the Peaceable Kingdom on Earth where the lion lies down with the lamb and no one hurts or destroys others, just maybe short-sheets their beds. 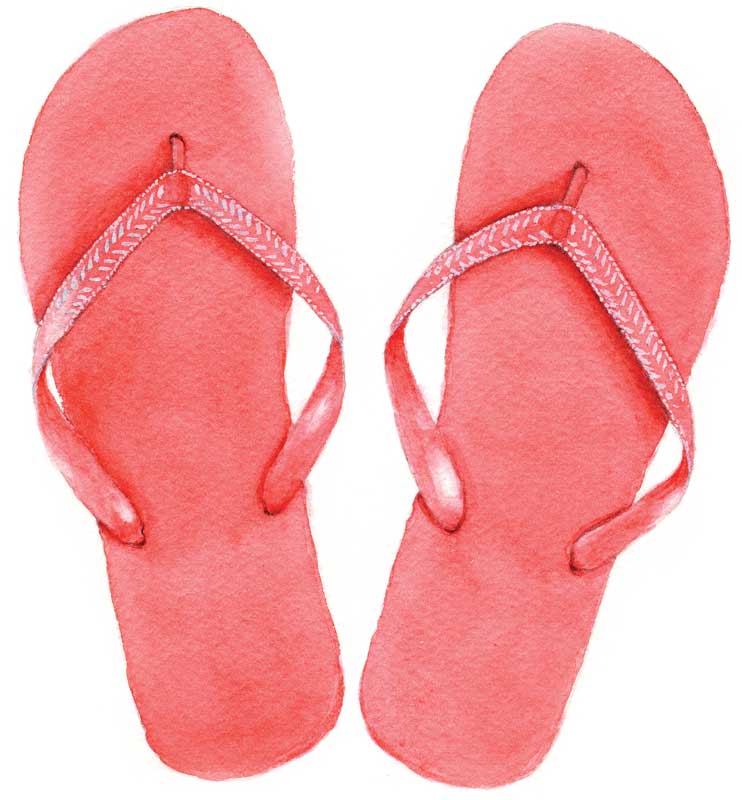 Illustration by Candice Hutchison The more delicate spring flowers have faded at the coming of the heat, making way for the tougher, high-summer blooms of black-eyed Susan, Queen Anne’s lace, and sweet-smelling valerian. The valerian, also called heliotrope, is a gift to the harried native and the frenzied rusticator alike. Its dreamy, soporific odor has a calming effect on both townie and tourist, leading them to forget what it was they were so anxious about just a moment ago. For centuries, valerian root has been recognized as an herbal remedy for anxiety. It is no wonder that the modern pharmaceutical Valium is derived from this plant.

Also in bloom is fireweed, Chamaenerion angustifolium, with its tall spires of bright magenta flowers. This wildflower has a fascinating story. It gets its common name from its ability to rapidly colonize burned over areas with its wind-borne seeds, and is well-known for this throughout Canada and the northern United States. In Britain after World War II it was called “bombweed” for its habit of being the first plant to appear in bombed-out areas. The seeds grow in long, narrow reddish pods along the tall stalks after the flowers fall. The pods open to release myriads of seeds each equipped with a silken sail, much like milkweed. These seeds find their way to bare soil where new fireweed plants appear and spread in thickets by underground roots which have the added benefit of slowing erosion. In some places fireweed has been intentionally planted in clear-cuts to hold the soil and to provide shade and cover for pioneering seedlings and fauna. A plant both beautiful and beneficial.

Green frogs and bullfrogs call from the ponds while snapping turtles ever so slowly cross the roads seeking suitable places to lay their eggs. Give snappers the right of way; they have earned it by being here first, by several million years.

In the spring, it would be hard to find a more devoted gardener than your commentator. Before the frost is barely out of the ground we start cultivating and raking, loading on the compost, and waiting for any sign of life from the perennials. We greet each new green sprout with a cheer. Come Memorial Day we have our annuals—cosmos, nasturtiums, zinnias, and the like—ready to pop into the ground, and we wait eagerly for them to bloom, while pulling weeds that inevitably pop up. By the Fourth of July, however, our zeal has flagged a little, and by late July nature has taken her course and there are weeds aplenty, and we are feeling guilty for letting them get ahead of us. Most years, that is the way it goes, but this year we decided to forgo the guilt trip and treat the weeds that found us on their own just as kindly as we treat the plants we buy at the garden center.

First and foremost are the Ox-eye daisies familiar to all, and a great flower for cutting and arranging because they last so long. That tall plant with the dark green foliage and masses of small white star-like flowers? I tell people that it’s saponica, and they nod and smile. Then I tell them it’s also called bouncing Bet or soapwort and you can make soap with it, and their eyebrows go up. That soft spreading plant with rounded leaves and cute yellow flowers is greater celandine, also called tetterwort, and its orange sap is said to cure warts. That tall plant with numerous yellow blossom spikes is solidago, aka goldenrod. It’s great for attracting native pollinators, and has many medicinal uses. And of course, there is the milkweed which is the plant Monarch butterflies prefer to lay their eggs upon. Come to think about it, these weeds are a whole lot more useful than the plants we bought at the garden center, and just as pretty, too!

Ralph Waldo Emerson defined a weed as “a plant whose virtues have not yet been discovered.” Many of the plants commonly condemned as weeds have traditional food and medicinal values long forgotten or ignored by most of us. Compare the standard Golden Guide to Weeds (1972) to the immortal Euell Gibbons’s classics Stalking the Wild Asparagus (1962) and Stalking the Blue-eyed Scallop([1964), and you will quickly see that one man’s weed is another man’s feed; not to mention, medicine, nerve tonic, energy supplement, and even aphrodisiac.

It’s probably safe to come out now. The Plague of the Earwigs appears to be winding down. For a while there were earwigs in the bed, in the kitchen, in the bathroom, everywhere. We had to shake out our clothes and check our shoes in the morning. Pick up a book or a cup or your napkin and an earwig scampered out. It was enough to make a person jumpy. It’s usually our practice to take insects outside using the old jar and postcard trick, but we went past that and resorted to more drastic measures.

Yes, they are only doing what they were made to do. Yes, they are one of the few insects that look after their young, cleaning their eggs and turning them like a hen. But there were just too many earwigs! Then one day, as though the Emperor Earwig had ordered them all to retreat, they simply disappeared and we haven’t seen a single one in the house since. Not a one. Just amazing! Has anything like this happened to you?

All summer long, the big trees are adding another ring to their girth and another span to their height. A healthy woodlot may look pretty much the same from one year to the next but it is almost invisibly adding up to a cord or more of wood per acre per year. The bigger the tree, the more wood it adds. This is the fundamental miracle and source of life on earth. Left alone, the green cell combines sunlight, water, and nourishment derived from the soil to make more and more life. Animals, in turn, derive their life from plants. A big tree is the actual breathing incarnation of this miracle. This goes a long way toward explaining why the Tree of Life is mentioned in both the first and last books of the Bible and why big trees are honored and worshiped around the world. Shinto priests bring offerings to big trees in the mountains of Japan and tree-huggers live in the tops of giant redwoods in California to protect them from felling.

In my saunters around town I have found a number of exceedingly large “mother” trees: a yellow “Getchell” birch halfway up the mountain surrounded by a grove of its offspring, a sugar maple on Pleasant Street in the village, a white pine on the Reach Road, and a huge white ash near Closson’s in North Blue Hill, to name a few. It is hard to pass one of these giants without admiring it, speaking to it, yes, even hugging it and feeling the pulse of its surging sap pressing against your heart. These heroes have successfully weathered the storms of far more than a human lifetime and they humble us with their great size and age, their constancy, their productivity and their peaceful patience. They deserve to be honored as icons and monuments to the majesty of life on earth.

“Rest is not idleness, and to lie sometimes on the grass under trees on a summer’s day, listening to the murmur of the water, or watching the clouds float across the sky, is by no means a waste of time.”

“Another world is not only possible; she is on her way. On a quiet day, I can hear her breathing.” —From Arundhati Roy