An Ode to a Puffin 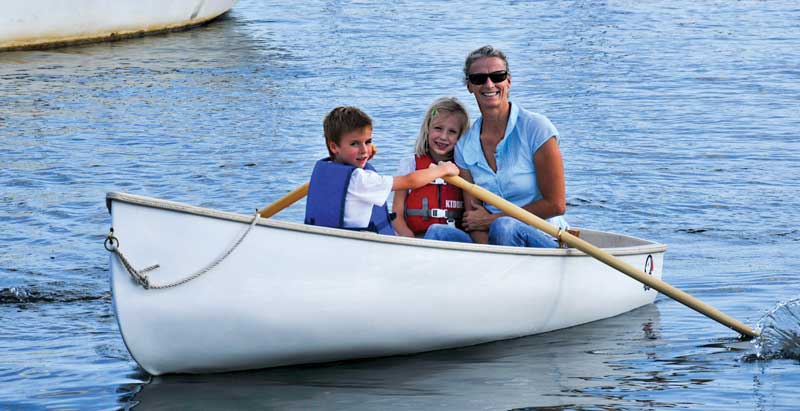 Iselin Bratz, with her brother, and mother, photographer Alison Langley, in their Puffin dinghy. Photo by Jane Kurko

There she was, swaying in the water alongside the dock, our little rowboat waiting for us. We stepped in, greeted by shining varnished seats and golden bronze oarlocks. It was time to head out to sea, to wherever the wind took us, well, to wherever our mom took us, that is.

Leaving the house, after what often seemed like an eternity of preparations, the same feeling of excitement would overtake me every time: knots in my stomach, a longing for the sea, a longing for the adventures where I truly felt at home. That little boat, The Puffin, paved the way for my love of the sea; it was my stepping stone to the ocean breeze and freedom.

My mother bought The Puffin—the name stuck because my twin brother and I didn’t realize that Puffin wasn’t its individual name but rather a brand of boat—in 2010 at a gala auction at the Penobscot Marine Museum in Searsport, Maine. A nautical photographer, she needed something durable to transport herself to and from her launch, and more importantly, she needed something that could hold two rambunctious kids. While she didn’t know it at the time, those 6-year-old twins would grow to love that little vessel.

Summer after summer my brother and I would clamber into the rounded bow of The Puffin as our mother rowed away from the dock. We’d head off across the water to her powerboat, which became our vehicle for a successful summer, both for our mother’s work and for fun. After unloading our stuff from The Puffin into the big boat, feet wobbling all the while, we’d hook the rowboat to the stern, and take off out of the harbor, headed for our next adventure.

As I look back, each summer’s outings on The Puffin were a marker for my growth. Some children’s growth is recorded by pen marks on a wall; ours was measured by how much smaller the little boat became as we grew bigger.

We’d watch it trailing behind us as we powered along the midcoast. Sometimes we’d sleep under it at the end of a long day when it would be hauled up with our mother’s powerboat near our campsite.

Eventually, I learned to row it myself.

I remember that day perfectly. It was near dusk and the harbor was shrouded in fog. We were at our house when my mom realized that she had left something in the boat that needed retrieving. She begged me to come with her—I didn’t know it, but she had a plan for me. I didn’t want to leave the comfort of our couch, but my feelings of reluctance disappeared when we got to the dock and she gestured for me to sit in the middle seat—her seat.

Although I didn’t row the boat very fast that first time, I felt empowered, like I had become an adult.

The Puffin now sits unused in our backyard, replaced by a sea kayak that my brother wanted.

But as I look forward to my graduation from high school this spring, Mom and I have plans to bring The Puffin out of retirement, to give back life to the little boat that helped me grow up.

It feels good to know that in a time when my life will change, The Puffin will also become a better version of itself.

Iselin Bratz is an editorial intern at MBH&H.

Some book ideas for winter reading