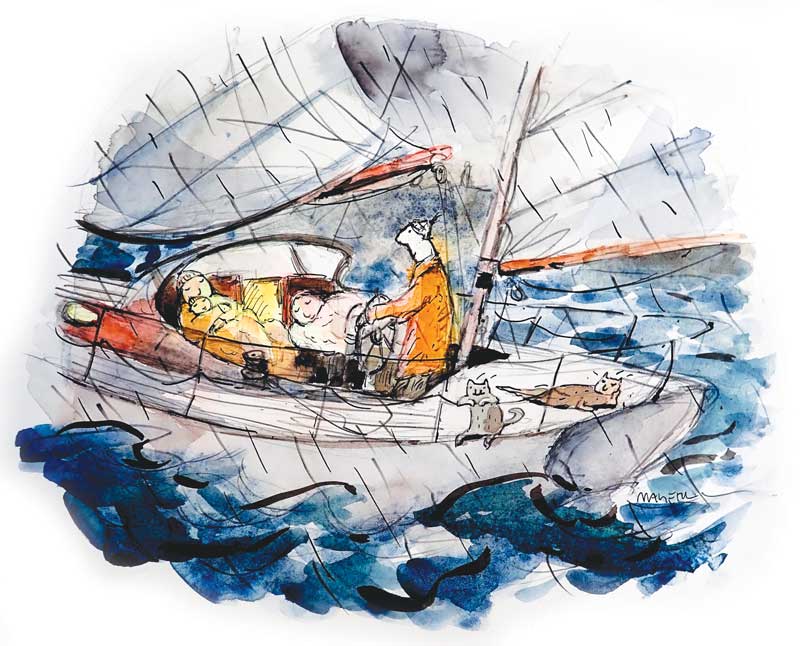 “I think what connects some people to the art they like isn’t wishing they could paint it but rather wanting to be in the scene that the artist has painted.”

I first read these words in the sixth grade on the pages of a novel written by Jimmy Buffett, and they resonated with me in that way that inspirations do, and sparked a love of adventure that has burned bright since that day.

Buffett’s words came back to me as I sat at the helm of the 42-foot ketch Felicity motorsailing through a stormy night off the coast of Maine. The Boone Island lighthouse flashed off the starboard rail, its metronomic white beam slashing through the mist of rain and fog. The boat belonged to my friend Nick and his wife, Alina, who live aboard full time with their young daughter. My partner Amber and her kids, Ava and Abe, made up the rest of the human crew—two cats, Bogey and Alice, rounded out the living souls aboard.

The boat bucked and rolled in the quartering seas as we slowly beat our way toward our next anchorage at the Isles of Shoals. The rest of the crew had finally settled in, resting after a long evening of dealing with heavy seas. Alina was curled up under blankets in the cockpit holding her baby. Amber rested fitfully on the other side of the cockpit, one foot sticking out from a mound of blankets. I poked my head in the rear hatch and spied Nick napping on the bunk, resting up for his next turn at the helm. I engaged the auto helm to hold our course and glanced down the main hatch to check on Ava and Abe sleeping below, exhausted from the stormy night and a hard day of play.

We had spent the previous two days anchored in Vinalhaven’s Seal Bay in a small cove ringed with granite and a thick pine forest. We dropped the hook next to a 48-foot cutter belonging to friends who were spending the summer cruising the coast. As the sun set over the pines, we grilled burgers and fell asleep to the gentle lapping of water against the hull.

We woke early the next day and before I could finish a cup of coffee the kids were devouring pancakes and begging to go play with the kids on the other boat. Soon they were strapped into harnesses and swinging from the halyards, smiles so wide that I could see them from across the anchorage. The rest of the day was spent swimming in the icy waters around the boats, exploring the sandy point at low tide, and enjoying time in a beautiful place with good friends.

Now, checking the sails by headlamp, I gazed past the bow of the boat toward our destination somewhere out there in the mist. The squalls passed and the sea mellowed as we glided along under the combined power of the wind and humming diesel. Nick relieved me after his nap, and I curled up on the cockpit cushion to catch a bit of shut-eye.

When I woke up, I could tell it was getting to be morning despite the sky still being pitch black. The boat was cruising along comfortably on a more organized swell. Nick sat at the helm, happy as only a captain can be when feeling one with a boat as it surges along, balancing the forces that act upon hull and canvas. As I glanced at the sails and listened for signs of faltering from the faithful diesel, Nick and I simultaneously noticed a strange glow from the water beside the boat. Felicity was sailing into a pocket of bioluminescence and the contact of the hull with the plankton in the water caused an ethereal bluish  green glow to form on the wake thrown along the sides of the boat. We watched as the glow became stronger and spread behind the boat along our wake. It reminded me of the scene in Peter Pan when Captain Hook’s ship flew across the night sky, infused in pixie dust and casting a trail of light.

Ava joined us on deck and we all watched until the glow faded as we left the confluence of forces that caused such a sublime event. Night passed slowly into day, the sun lighting the eastern sky and slowly creeping its way across the water.

I was lost in thought as I steered our course from the helm. Reflecting on our adventures since leaving Boston, I was struck by an interesting realization about how this trip differed from so many previous ones. My life has been full of adventure-seeking trips, mostly in the form of the extreme. The moments that have always stuck out before were the ones of greatest intensity—hanging from mountain sides, skiing the craziest lines. This time, my takeaways would be different.

These highlighted memories would be of moments with family and friends. The look of wonder in Amber’s eyes the first time she saw how bright the stars look from the deck of a ship at night. The look of pride on Nick’s face as he sat at the helm of Felicity. The laughter of people brought together in a perfect combination of place and time.

My journeys have often been solitary, where my main focus was me. Having a family is still relatively new for me, and sitting at the helm that morning I realized that a whole new world of adventure was opening up. It’s a more crowded world with a partner and two kids I love dearly. The opportunity to see them chase their dreams and experience their own adventures will forever change what adventure looks like to me.

Amber handed me a cup of coffee as I moved over to let Nick take the wheel. “What if we just skipped going back to Boston and kept heading south?” I said, with a smile.

Nick gazed out past the bow and grinned. “It would be fun if the adventure never had to end.” I smiled to myself and thought: “It really never does.”

Dylan Walton is an adventure writer, photographer, and life enthusiast chasing dreams up mountains and across oceans.