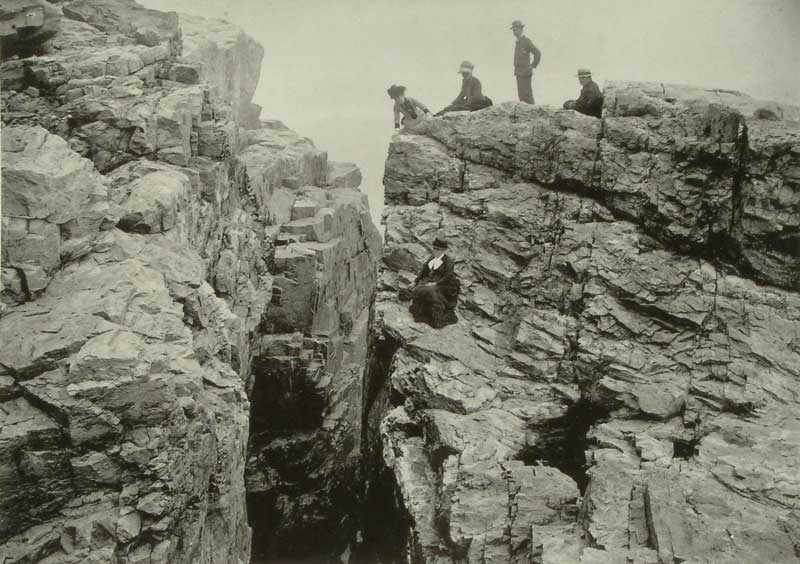 In the late 1860s and 1870s walking, boating, and carriage rides were fashionable activities. Climbing around Mt. Desert Island’s rock formations was an especially popular pastime, for women in bustle skirts and high heels, as well as men. This photo shows rusticators above a landmark that the guides called “Spouting Horn.” It was included in Mount Desert Souvenir: Fifteenth annual excursion of the Massachusetts Press Association, July 5-9, 1884. Image courtesy Southwest Harbor Public Library Digital Archive

Acadia National Park attracted 2.7 million visitors to Mount Desert in 2020. Many of these travelers relied on a variety of guidebooks for information about the island’s scenic and cultural resources, ranging from hiking trails to historical societies. The origin of these useful publications can be found in the work of a little-known 19th century writer, Clara Barnes Martin.

On the eve of the Civil War in 1859, Mount Desert was considered remarkable for its size, its singular topography, its bold and wild scenery. These qualities captured the imagination of such Hudson River School artists as Thomas Cole and Frederic Church. Their paintings of the island’s dramatic natural beauty inspired interest in traveling there, and by the early 1860s, Somesville, Southwest Harbor, and Bar Harbor were dotted with summer hotels and boarding houses. After the Civil War, improved steamship and rail transportation transformed the island into a major American tourist destination with Bar Harbor’s large hotels and summer homes making it a rustic version of Newport. 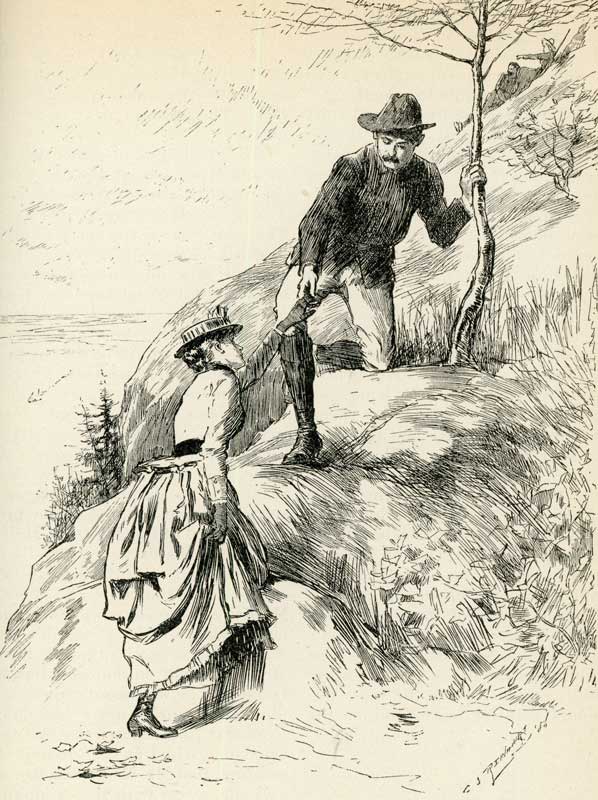 This image of rusticators climbing Newport Mountain by Charles Stanley Einhart was included in an 1886 article in Harper’s New Monthly Magazine about the various things to do on Mount Desert Island. Image courtesy Southwest Harbor Public Library Digital Archive In response to the area’s growing popularity, Martin compiled a 36-page guide to the island’s historic and natural attractions, titled Mount Desert on the Coast of Maine. Written in 1866 and published by Martin in May 1867, this modest booklet declared that “Bold bluff and rugged cliff make the fiords of Maine the wonder and delight of artist and tourist.” Mount Desert was the ideal American vacation retreat, wrote Martin, combining the features of the Isles of Shoals, Nahant, Newport, and the Catskills, all in one location.

Born in Waterville, Maine, in 1838, Martin was the daughter of Phineas and Anne Barnes. Her father was a Bowdoin College graduate, a Colby College professor, a newspaper editor, a politician, and a prominent attorney. The family settled in Portland in 1839, where Martin graduated from Portland High School and became a teacher there. After her marriage to architect Abel C. Martin in 1864, she resided in Boston and turned her attention to writing. At the time that she published her Mount Desert guide, she also produced The Story of Muff, about a cat that survived the Great Portland Fire of July 4, 1866. “Muff” appeared in 1867 as a 27-page booklet similar in appearance to the Mount Desert guide. The popular cat book was reprinted and sold by the Portland publishers Loring, Short and Harmon in 1868 and 1877. 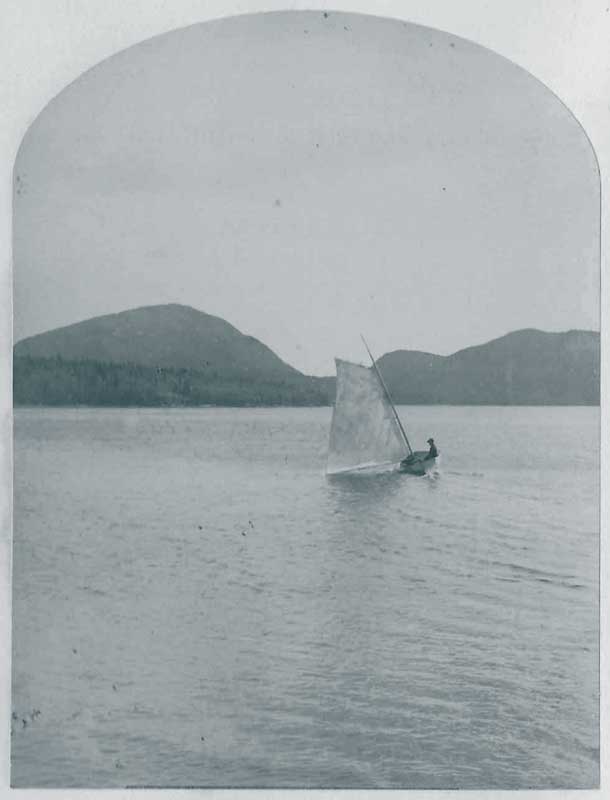 Clara Barnes Martin published her first guide to Mount Desert Island in 1867. The guide was revised and reprinted several times over the next decades (six editions in all). Martin added five photos, including these two images (here and below), and a map in the 1885 version. If “Muff” proved successful with Portlanders, Martin’s Mount Desert on the Coast of Maine was equally well received by a broader audience of travelers to the island. In 1870 Loring, Short and Harmon reissued the 36-page booklet. In 1874 Martin enlarged the guide for her Portland publishers to 96 pages with five photographic illustrations and two maps. Consisting of six chapters, the expanded book contained directions for reaching the island, descriptions of its topography and history, and excursions from Bar Harbor, Somesville, and Southwest Harbor, including advice on “how to make the best use of a short visit,” (four days).

Top attractions included a trip up Green Mountain (now known as Cadillac), the Thunder Hole and Otter Cliffs, and a drive to Bass Harbor Head.

“To the hurried traveler, it is of the last importance to do only that which is best worth doing,” wrote Martin.

Loring, Short and Harmon reprinted this revised edition in 1877, 1880, 1882, and 1885, labeling it “infinite riches in a little room” in the words of the English playwright Christopher Marlowe. In the 1885 edition, Martin wrote a brief note to her readers, expressing “the hope that it may serve the double purpose of a guidebook to the island, and at home in wintry days a souvenir of pleasant summertime.” 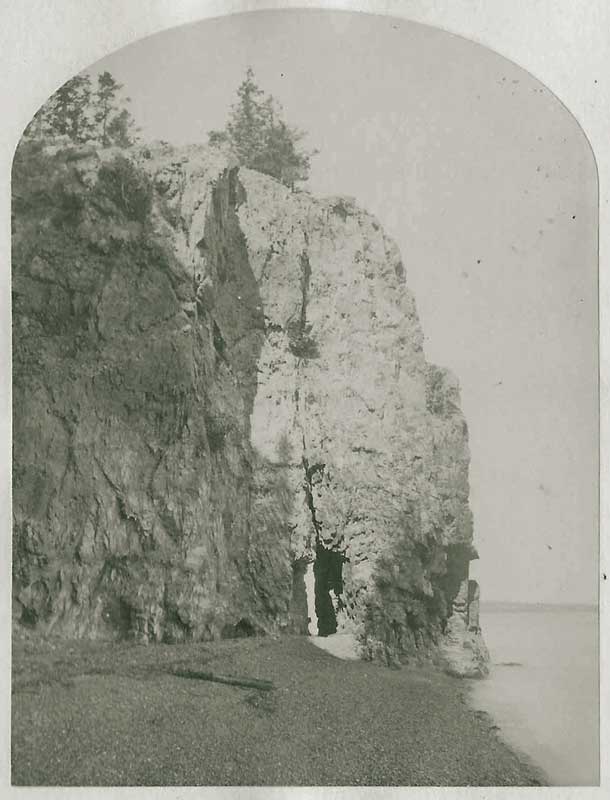 This early photo of the ovens on Mt. Desert Island was included in the 1885 version of Clara Barnes Martin’s guide to the island. While best remembered for her Mount Desert guide, Martin was also a noted educator, journalist, and critic. Her Oak Place School for girls in Boston won endorsements from Henry Wadsworth Longfellow and Oliver Wendell Holmes. She frequently contributed articles to national newspapers and magazines such as the New York Evening Post, the Philadelphia Bulletin, the Atlantic Monthly, and The Nation. She specialized in travel accounts, book reviews, and literary criticism. Her knowledge of languages, including French and Russian, enabled her to write articles about Emile Zola, Ivan Turgenev, and other foreign authors.

Martin’s life was touched by tragedy. She and Abel Martin lost their only child, two-year old daughter Clara, in 1868. Abel’s death followed in 1879. Clara died in 1886 at the age of 48 and was buried with her family in Portland’s Evergreen Cemetery. In August 1886, The Nation eulogized her passing, recalling that “she was the author of the standard guide to Mount Desert” and commenting that “whatever she wrote was marked by excellent qualities of style, great refinement, and elevated tone.” Her legacy of promoting Mount Desert is renewed each summer by the millions who visit the island she described as Eden.