An Australian in Acadia 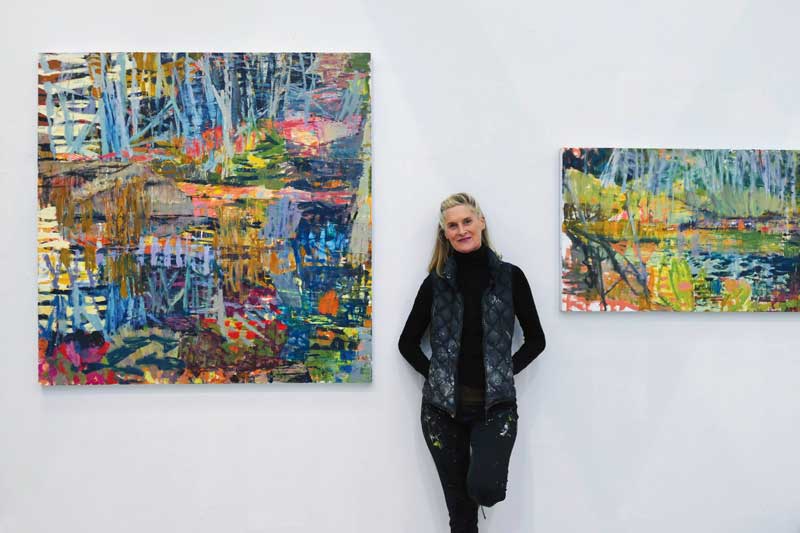 Joanna Logue in her Somesville, Maine, studio, framed by two of her paintings: (left) Breakneck Creek, oil on linen, 50 x 50 inches, and Marsh Song II, oil on linen 25 x 55 inches. Since moving to Mount Desert Island in 2016, the Australian-born painter has embraced the Maine landscape in all its moods and complexity. Photo by Martin Pera

In his Lakes & Ponds of Mt. Desert, William Newlin highlights the bounty of freshwater places on this island. In his preface to the 2013 edition, he notes how Acadia National Park visitors will talk about the “waves beating against the granite coast” and how some of them may know about the crisscrossing network of carriage trails, “but few will mention that very special feature of Mt. Desert: its fresh water.”

Not so for Australian ex-pat Joanna Logue: she is a kind of dowsing rod for the watery places of her adopted home. Indeed, much of the painter’s recent work revolves around water: ponds, marshes, forest pools, a creek. “I like the reflective qualities of landscapes with water,” she noted. “Reflections offer up an echoing of lines and shapes, encouraging a new way of looking—and this inspires abstraction.”

When she first moved to Mount Desert Island from her native Australia nearly six years ago, Logue was “mesmerized” by its beauty. The Maine landscape differed from that of her home down under. To begin with, there was more contrast and color. Where Australia’s landscape tends to be tertiary  and subtle, she found Acadia’s “intricate and complicated.” Logue’s palette, which leaned toward the monochromatic, shifted to include primary colors, especially when painting in the fall.

Since arriving, Logue has walked nearly every trail in the national park; “I feel I know it like the back of my hand,” she said. The places that have inspired her the most include the Witch Hole Pond loop and Eagle Lake. “This landscape is mysterious and has a timeless quality,” she noted. 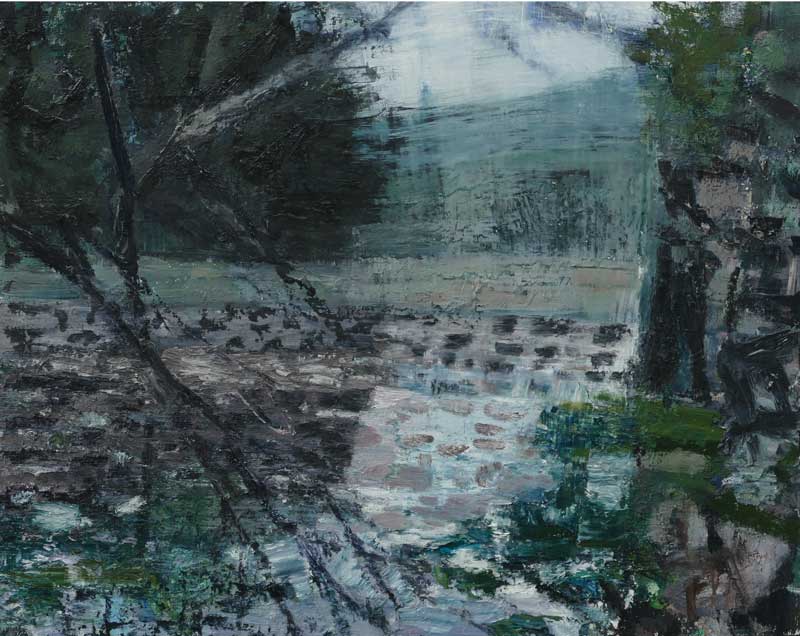 The 2021 painting Witch Hole is a study in grays and greens. The surface of the pond is marked by touches of paint that create a mottled effect. Branches cut across the view while a mass of dark trees looms and is faintly reflected in the water. While maintaining its ties to the scene, this painting leans into abstraction.

Since she started painting in Acadia, Logue has pretty much done away with the horizon line. The results are often tapestry-like, all-over abstract-lyric responses to the landscape. They are also richly layered, approximating how one might see an unruly world through an enveloping atmosphere.

That effect derives in part from adding a wax medium to the oil paint. The wax lends opacity to the painting and allows Logue to push out extraneous detail. She also uses Liquin, a quick-drying medium that allows her to scrape back while preserving the work beneath—“a kind of veiling,” she noted.

For the scraping Logue uses a concrete trowel, which pushes the paint across the picture plane, a means to achieve “a harmonious color field.” She also utilizes palette knives. She likes the variation of marks the tools create. “When I use the edge of a trowel, I don’t have the same control of line a brush might make.” She welcomes the open-ended nature of this approach.

Sutton Island, 2021, reflects this practice. You can see where the paint has been propelled to create a kind of blurring effect. Some lines from Hortense Flexner’s poem “Sea-Fog” inspired by this third-largest of the Cranberry Isles come to mind: “Senses are dulled, unneeded now; / Porch rail and pebble path / Are furled in fleece; / Bird-song is gone with the bough; / Muted the harbor bell as it would cease.” 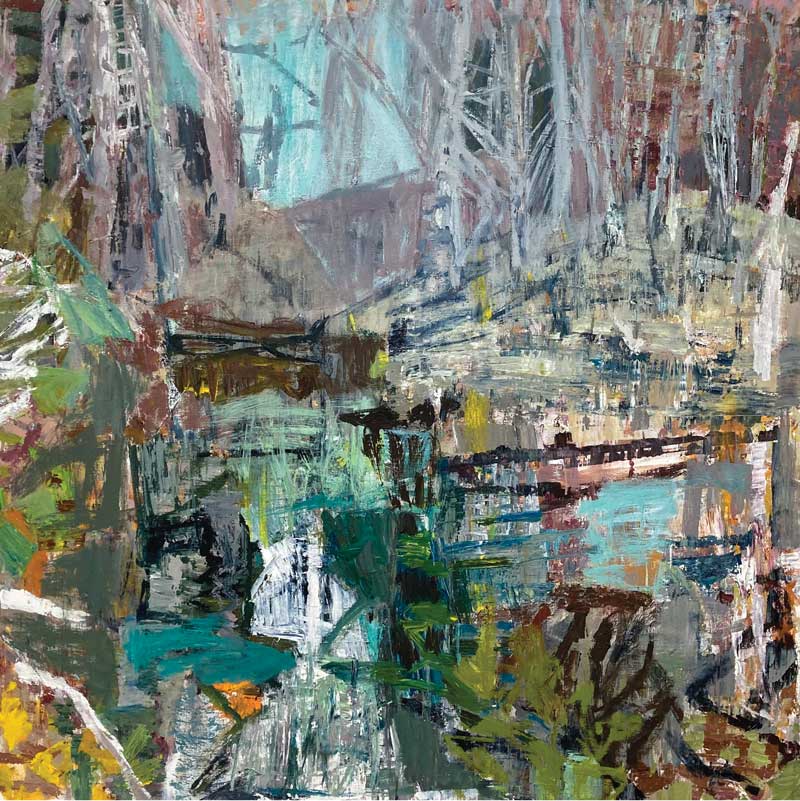 When a friend admired the duck egg blue in this painting, Logue titled it accordingly. Duck Egg Creek, 2022, acrylic on linen, 50 x 50 inches.

Another recent painting, Duck Egg Creek, is, according to the painter, “an imagined place evocative of many places” visited on the island. “Someone said they loved the duck-egg blue in the painting and that inspired the title,” she noted. With its proliferation of marks and hints of a landscape, this painting engages, and seduces, the eye.

Logue is always working on several paintings at the same time. Sometimes she “banishes” paintings to the wall or removes the work from the studio and places it in another space. “I don’t want to see it because I don’t know where to go next, but I know it’s got potential,” she explained. She likens this process to the “psychological tricks” writers employ to help them overcome blocks.

Sometimes Logue begins a painting with her eyes closed. “It allows me to start with an emotional approach, using memory rather than my intellect,” she noted. She may do it again part way through making a work, “to bring spontaneity back to a painting if it has become too contrived.”

Logue has shown her Maine landscapes in Australia every year since moving to Maine. That people have responded well surprises her because the work has become quite specific and “most Australians haven’t been to Maine.” The success of this work underscores her ongoing goal: to create a landscape “that can touch anybody.” 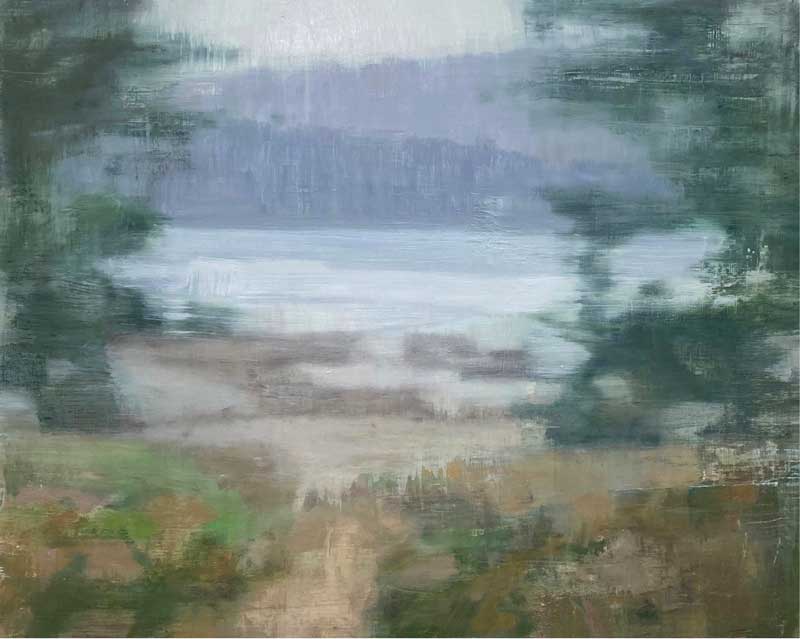 Logue and her twin sister Simmone were born and raised in Scone, a small town in the Hunter region of New South Wales north of Sydney. Their father ran a local newspaper, their mother was a schoolteacher. They spent a lot of time at their grandparents’ farm, in the chicken coop and vegetable garden.

The sisters were very independent at an early age, but “quite powerful” in their togetherness. They followed different paths when they moved to Sydney to attend school, Joanna to study art, Simmone, ballet. (Today, Simmone owns a successful high-end catering business in Sydney.)

Logue had been painting since she was 10 years old, but she felt liberated in art school, “unlearning” various rules she had been following up till then. Among her mentors was Guy Warren, a beloved Australian artist who turned 101 in 2022. She recalls one important bit of wisdom he shared: “Not every painting needs to be a masterpiece.”

After receiving a B.A in visual arts and a graduate diploma in professional art studies from the City Art Institute, Logue “put her head down” and started to search for a language in her art. “I’m still doing that,” she said.

She found inspiration at Essington Park, the property she and Simmone bought in Oberon in the Central Tablelands west of the Blue Mountains. Having been dependent on a camera in the city, now she found herself immersed in the landscape, walking in it every day, “breathing it.” She became a plein air painter.

Over the years Logue has done several residencies, including two stays at Bull Bay on Bruny Island in Tasmania. They allow her to explore a new place, “deeply engrossed and involved—sort of like a meditation,” she said, without a deadline or other restrictions.

Logue has described her meeting and marrying Martin Pera, a leading human stem-cell biologist, as “a modern fairytale of sorts.” Pera, who lived in Los Angeles, had been collecting her work for many years. With a trip to Australia to speak at a conference in the offing, he looked her up on the web and proposed a visit. “The paintings from all my shows in Melbourne came back to me when we married,” Logue said.

When Pera was offered a position at the Jackson Laboratory in Bar Harbor, the couple moved to Maine. The day they arrived at their home in Somesville it was 17 degrees. When they woke up the next morning, there was a snowplow in the driveway.

Logue started making paintings from the windows and then, when it warmed up, started to investigate a landscape she found “transporting.” Her studio is a well-lit space a few yards from her front door. With all the layering and scraping she does in her painting, “There is more paint on the floor than on the canvas.”

Logue maintains a full schedule, 10 a.m. to 6 p.m. six days a week. “I never walk into my studio and pick up a paintbrush and begin working in the morning,” she said. Instead, she “does laps,” walking around the studio, maybe putting a record on, “usually an anthem of some sort, Bob Dylan, just one song to get the juices going.”

“I don’t want any distractions,” Logue said, adding, “I don’t want my emotions being pulled in another direction about how I’m feeling about my place in the world.” Due to health issues, she recently abandoned oil paint and is now working with acrylic. The change has been challenging, she reports, but she’s “getting the hang of it.”

With all the turmoil in the world, from the climate crisis to the pandemic and the war in Ukraine, Logue has found herself questioning the relevance of landscape painting. At the same time, she feels enormously grateful that she can make paintings “about this beautiful place” in Maine and take solace in the healing power of nature. The paintings are an expression of her reverence for the landscape and its healing powers, she has said, and an honoring and celebration of nature, “and this feels supremely important.” It does indeed.

This piece draws on an e-mail exchange with the artist in April and on her “Talking with Painters” interview with Maria Stoljar. You can see more of Logue’s work at www.joannalogue.com. She showed with the Gallery at Somes Sound last fall and was due to exhibit at the Page Gallery in Camden in May. A solo show of her Maine work opens at the King Street Gallery in Sydney, Australia, in November 2022.