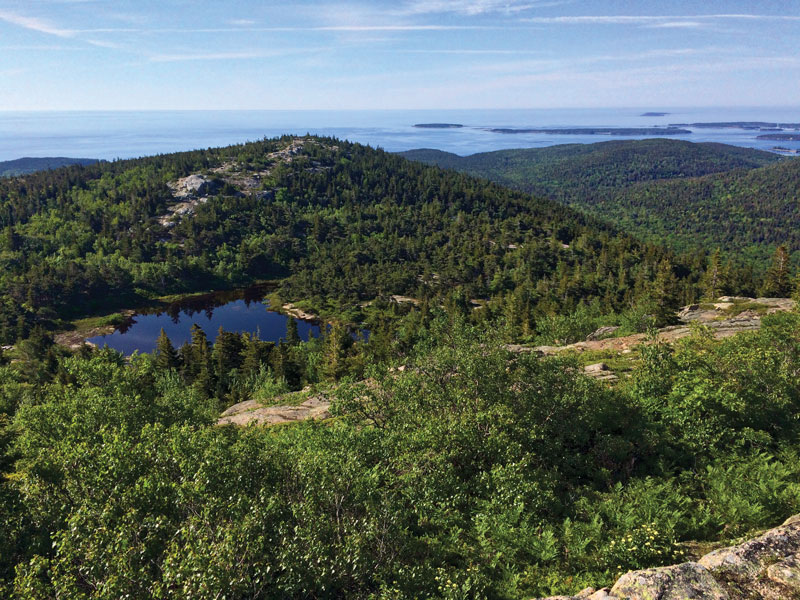 The Featherbed, a small pond on the south ridge of Cadillac Mountain. Photo by Catherine Schmitt

On any given summer day, hundreds of tourists sink their teeth into a steamy, butter-and-jam-smeared popover at the Jordan Pond House in Acadia National Park. Perhaps they have a view out the window, to the deep blue lake surrounded by steep rounded mountains. Maybe some wander down the lawn to peer into the crystal-clear water. Few, if any, notice the white buoy floating at the far northern end of the pond.

Suspended from the buoy, a few feet below the water surface, are sensors that measure temperature, dissolved oxygen, algae concentrations, and water chemistry every 15 minutes. A string of additional sensors measures light down to 10 feet and temperature to 50 feet, about a third of the way to the bottom of the lake, reportedly the clearest lake in Maine. 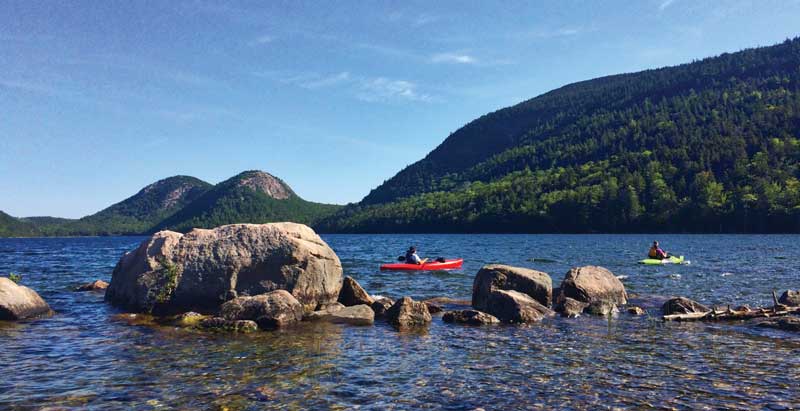 Kayakers on Jordan Pond look toward The Bubbles and Pemetic Mountain. Photo by Catherine Schmitt

Jordan Pond is one of a scattering of sapphire pools left behind by the glaciers that gave Mount Desert Island its name and character. There are other large lakes—Eagle Lake, Echo Lake, Long Pond, and Seal Cove Pond—and chains of lakes that drain to the sea. The valleys and flats between mountains hold strings of ponds and wet meadows alive with ducks, dragonflies, beavers, and otters.

Higher up the mountain sides, watery depressions like The Bowl, The Featherbed, and Sargent Mountain Pond are like granite cups of rain offered back to the clouds. Sargent Mountain Pond, at an elevation of 1,200 feet, is considered to be the “first” or oldest lake on this landscape, the first place to fill and hold water as the last glaciers melted away from Wabanaki homeland.

Covering 7.5 percent of the park, Acadia’s lakes are unique for their coastal mountainous setting. Scant minerals shed by granite foundations are supplemented by infusions of sodium and calcium from ocean wind, rain, and fog. Protected forests surrounding the lakes filter water, while providing carbon-rich food to the aquatic food web.

Six lakes supply drinking water to thousands of residents and the millions of people who visit Acadia each year. Protecting water supplies was one of the early motivations for land conservation on Mount Desert Island, and remains of utmost importance to local residents.

Research by Second Century Stewardship Fellows, supported by Schoodic Institute at Acadia National Park, shows how Acadia’s lakes are ever-changing, reflecting whatever is happening in the atmosphere above them and the communities around them. 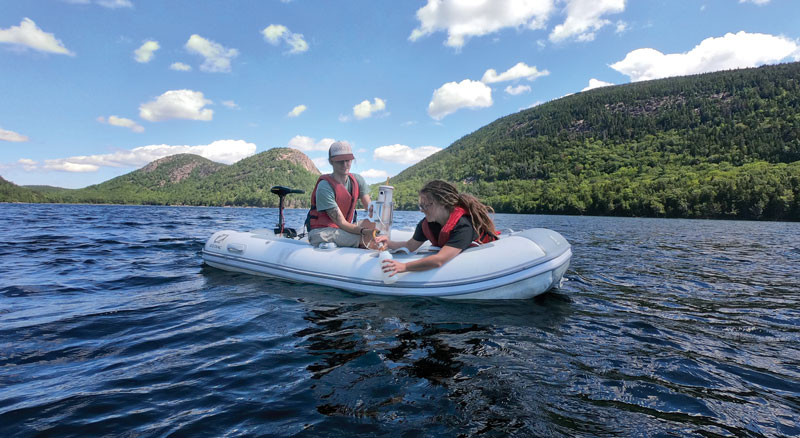 Data from more than 40 years of National Park Service lake monitoring, combined with studies by UMaine researchers, show a decline in water clarity (or transparency) over the last 25 years. Transparency is measured by lowering a black-and-white patterned “Secchi disk” into the water and recording the depth at which it disappears from view. The greater the Secchi depth, the clearer the lake.

In Jordan Pond, average Secchi depth is getting shallower, from 45.6 feet in 1995 to 40.1 feet in 2021, due to increased color from dissolved organic carbon. Scientists have documented this “browning” trend in lakes of all shapes and sizes across the park, region, and hemisphere, suggesting a shared and widespread cause. 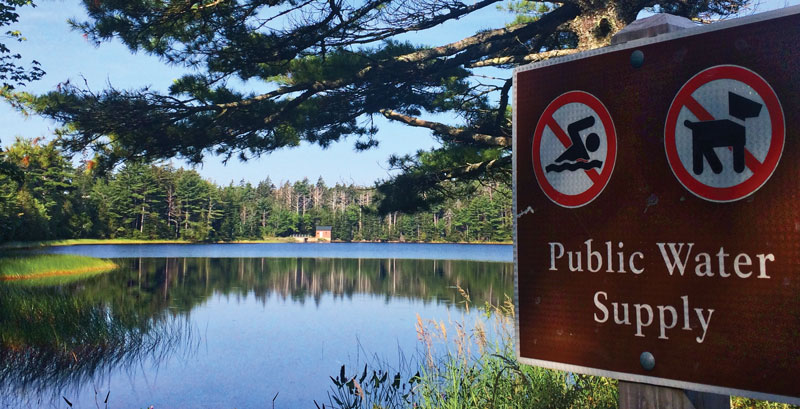 Lower Hadlock Pond is one of six lakes in Acadia that provide clean drinking water. Photo by Catherine Schmitt

Once in a lake, dissolved organic carbon absorbs light, preventing the sun’s rays from reaching deeper into the water.

“Light plays an important role in determining how much algae can thrive in Jordan Pond, especially deeper in the lake where there are often greater concentrations of nutrients,” said Dr. Rachel Fowler of the University of Maine, who has been studying water quality in Jordan Pond for the last five years.

“By analyzing sediment from the bottom of the lake, we found evidence that during a time period with lower dissolved organic carbon concentrations (about 1940 to 1990), there was more algae in Jordan Pond. We think this might be due to increased light availability,” said Fowler. 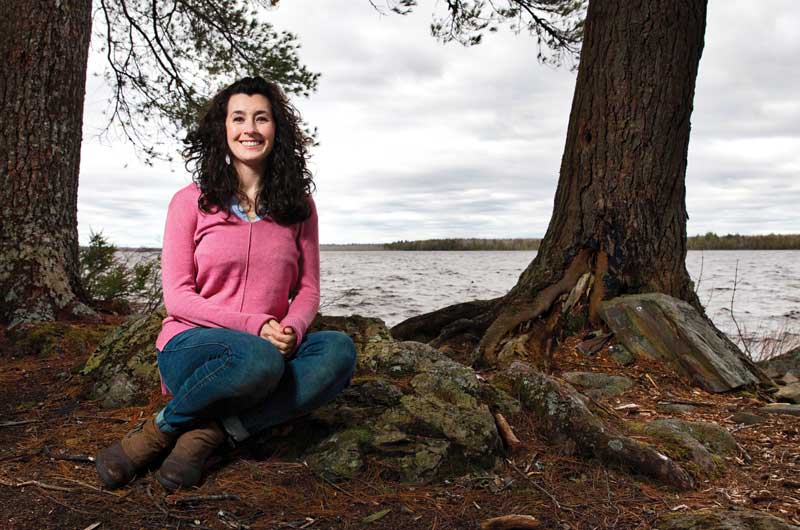 Dr. Rachel Fowler has been studying Acadia’s lakes for the last five years. Above: Photo by Elliot Higger

Across the State of Maine, warming temperatures and continued pressures from shoreline development are stimulating harmful algae blooms, even in lakes previously thought to be unfettered by such issues. Could Acadia’s lakes be next?

While browning seems to be linked to less algae, lakes are never as simple as they seem.

“Increasing dissolved organic carbon can lead to more oxygen being consumed as the organic matter is broken down,” said Fowler. “Low or zero oxygen conditions at the bottom of the lake could increase phosphorus release from sediments and fuel algal biomass.”

In an attempt to develop an “early warning system” for algae blooms in Acadia lakes, Fowler and graduate student Matthew Farragher focused on phyocyanin, a blue pigment protein found in cyanobacteria, a kind of algae that thrive in warm, nutrient-rich waters and can be toxic to people and animals. They found very low concentrations of the pigment. 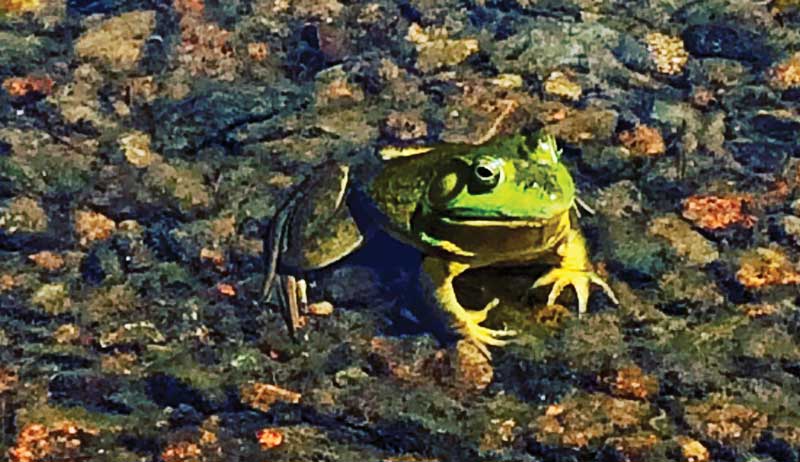 A bullfrog in Bubble Pond. Photo by Catherine Schmitt “While we do not expect a harmful algal bloom to occur in Jordan Pond anytime soon, it is interesting to observe that elevated phycocyanin levels do occur, and that these seem to correspond with periods of low oxygen and elevated water temperature,” said Fowler.

According to Acadia National Park biologist Bill Gawley, the park will continue baseline monitoring of lake water quality and quantity, as well as support and participate in research efforts like Fowler’s study. For example, Acadia is part of a national survey of harmful algal blooms being led by the U.S.
Geological Survey. “Considering the increased frequency of harmful algal blooms in the region and their potential effects on aquatic ecosystems, human health, and visitor experience, it is crucial that we understand the causes, mechanisms, and risk level of these events,” said Gawley.

Other kinds of air-to-water pollution continue to plague Acadia’s lakes, such as high concentrations of toxic mercury. The National Park Service has been measuring mercury deposition in Acadia since 1996 and most other air quality parameters like acid rain since 1981.

Understanding the connections between lake food webs and the surrounding environment is the focus of research by Dr. Christina Murphy of the U.S. Geological Survey Cooperative Fish and Wildlife Research Unit.

Each lake has its own community of both native and introduced fish species, and thus its own relationships of predators and prey, which in turn influence how much food from the water reaches the adjacent forest.

In spring, the hatch of dragonflies and other insects out of lakes and into the landscape occurs before other prey like caterpillars and beetles become plentiful, creating a rich food source for animals living near the water. But these insects can also carry pollutants like mercury from the lake.

This summer, Murphy will sample aquatic insects, fish, and birds to “map” the food web in several Acadia lakes. The results could inform efforts by the National Park Service, Maine Department of Inland Fisheries and Wildlife, and local water districts to manage fish populations and to better understand the transfer of contaminants like mercury.

Dragonflies and birds may be admired by visitors who, after their popovers, stroll along the reedy edge of Jordan Pond. The view from the rocky southern shore toward The Bubbles is one of the most photographed scenes in the park. For tourists, much more so than for local residents, the beautiful views provided by Acadia’s lakes are their most important function, according to surveys led by Dr. Kate Ruskin of the University of Maine.

“Visitors are in Acadia relatively briefly to enjoy nature,” said Ruskin. “For lakes, that largely amounts to taking in beautiful views.”

This does not mean, though, that residents don’t appreciate the beauty of water. For those fortunate enough to be surrounded by Acadia every day, the beauty is simply a part of life itself.

There is no better away to enjoy the beauty of Acadia’s lakes than from a boat.

“Many’s the time, even now, that yours can be the only boat on the pond,” wrote William Newlin in The College of the Atlantic Guide to the Lakes & Ponds of Mt. Desert, published in 2013. This is still true today. A boater can drift past an osprey nest in a pine tree high above Lake Wood, or watch the spring warblers along the shore of Lower Hadlock Pond. Swimming spots and fishing holes and quiet nooks can still be found. Newlin’s advice still holds: “If we all respect private property and everyone else’s privacy, don’t make a lot of noise, and don’t leave any litter, there is plenty of room for us all.”