Maine has a storied history of fishing tackle makers, including Hiram Leonard and modern tackle retailers like L.L. Bean, but much less is known about the men who designed and built the early salmon reels used to fish for Atlantic salmon. 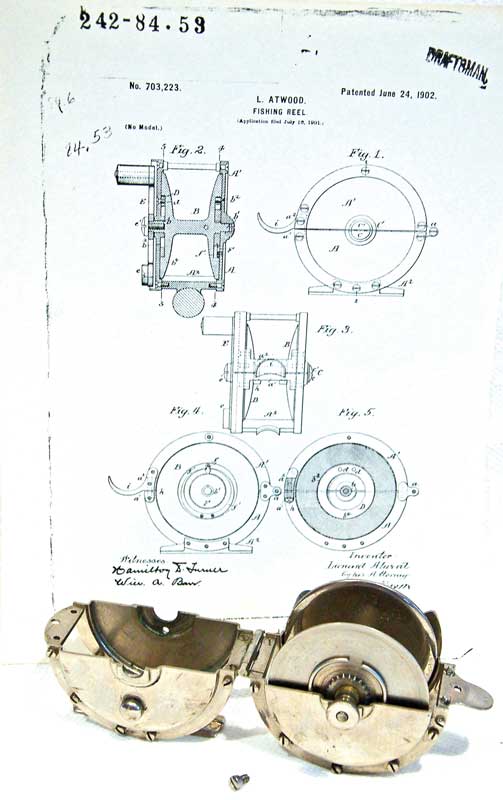 Leonard Atwood’s innovative hinged fly reel design patented in 1902, shown here with the patent paperwork. Photo courtesy Rick Bannerot Some of these classic salmon reels have become highly valuable and the object of desire for collectors, inspiring several generations of bench reel makers, including some who still build salmon reels in Maine today.

Perhaps the most iconic salmon fly reel from Maine was the Philbrook and Payne reel designed by Francis J. Philbrook and Edward Payne for the pioneering tackle maker Hiram L. Leonard of Bangor. Philbrook was a gunsmith machinist who assigned his 1877 patented reel design to Leonard to manufacture his first reels. The patented pillar design for the reel cage above the circumference of the reel allowed for more line to be stored with less weight than other reels of the time.

Philbrook collaborated with Edward Payne, who worked with Leonard in the rod-making business.

The beautiful salmon version of the reel has gorgeous marbleized orange and black end plates made with a special process molded from a special mud and then carefully machined. The raised pillar nickel-silver reel frame, itself a work of art, was set in a steam-heated cast-iron mold. Orange and black granules were then sprinkled on the hot mold surface. This would result in many different patterns, with no two reels being identical. 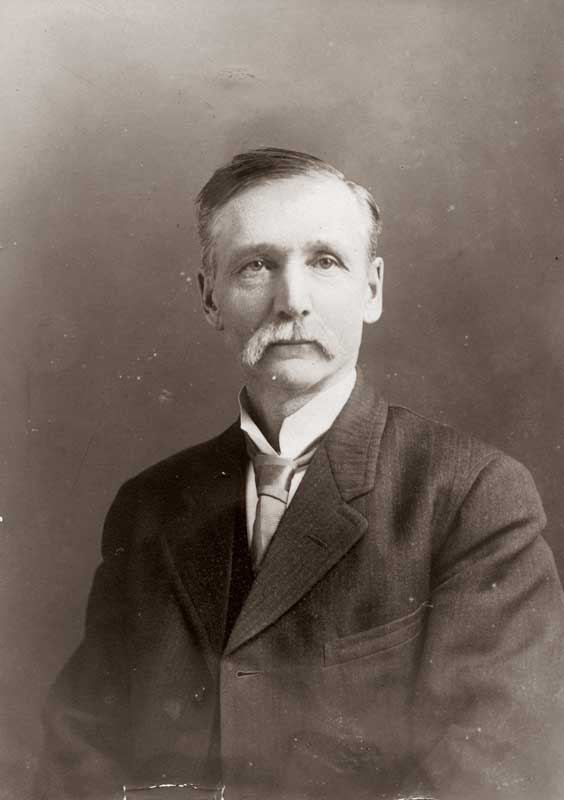 Leonard Atwood’s prolific inventions included the elevator and airplane flaps, as well as intricate fishing reels. Photo courtesy of Farmington Historical Society Later versions of the Leonard reels were made with bi-metal and black hard rubber side plates for nearly 100 years. The reels were later made (from about 1900 to World War II) by the famous New York reel-maker Julius Vom Hofe and sold by the historic William Mills and Co.

Perhaps the most colorful reel-maker to hail from Maine was Leonard Atwood. Atwood was born in Farmington Falls in 1845. He served in the Union Navy during the Civil War. After leaving the Navy, he started working for Flagler and Rockefeller, a firm that later became known as the Standard Oil Company.

Atwood had a keen interest in anything mechanical, and in the 1870s he installed elevators in buildings and hotels, using machinery he designed, manufactured, and patented. In the early 1800s, he sold his elevator patents to Elisha Graves Otis, the founder of the Otis Elevator Company. Atwood is sometimes known as “The Father of the Modern Skyscraper” for the elevators that allowed builders to build higher and higher structures. He went on to organize one of the first coastal railways, including what became the Wiscasset, Waterville and Farmington Railway, of which he was president. He was also granted patents for a bottle opener, a spark arrester for locomotives, a process for drying brewer’s grain, and the movable flaps for airplanes that are still in use today.

But perhaps Atwood’s most unusual venture was the design and manufacturing of fishing reels. He filed five main reel patents, including one for an innovative and complicated hinged fishing reel that could be taken apart for oiling while still on the rod. He created another reel with glass side plates that would reveal the internal mechanisms.

He also designed a “variable tension” reel that allowed the angler to vary the tension on the reel from delicate to powerful while the reel was in operation. This design also had a crank lock that would lock the handle in place, eliminating the possibility of back-lashing and the resultant bird’s nest of tangled line that’s well known to many anglers. Alas, as many of the Atwood designs were overly complex and hard to manufacture, few of his reels were produced, but their scarcity makes them desirable for collectors.

Even though the heyday of Atlantic salmon fishing is long gone on such storied rivers as the Penobscot, where salmon clubs like the Penobscot Salmon Club and the Eddington Salmon Club were founded and where the ceremonial Presidential Salmon was killed and sent to the U.S. President every year, salmon reel making carries on.

Many of the classic salmon reels are still bought and sold and used by anglers on rivers around the world. Specialized retailers like the Spinoza Rod Company and the online auction platforms provide an active resale market for the finest examples from the best makers.

The design and manufacture of classic salmon fly reels continues in Maine today, with modern bench reel makers such as Todd Sands of Bangor, who was mentored by the master reel maker Dr. Paul Hermann.

Hermann designed and hand-made classic S-handle-style reels that remain popular with salmon fly-fishermen today. Hermann, impatient with not being able to purchase a salmon reel from the legendary reel maker Stan Bogdan, decided to design and make his own. A doctor with a practice in Winthrop, he taught himself how to machine the necessary parts through trial and error. He never viewed his reel making as a business, but more of a hobby that got out of control.

The design of the drag system for his reels was the biggest challenge, as Atlantic salmon are hard-fighting fish that require a strong drag on the reel to slow them down. He came up with the basic idea for his drag assembly by studying the brake system on railroad trains.

Hermann went on to produce over 300 reels over the years, and his reels still fetch over $2,000 apiece, if you can find one.