By Rob McCall
“It was one of those March days when the sun shines hot and the wind blows cold; when it is summer in the light and winter in the shade.” —Charles Dickens

March is very much about light; we haven’t seen this much sunlight for six months and the vernal equinox is straight ahead. The sun hits the tops of the trees a little earlier in the morning. It fades a little later in the evening and so do we. Things that were dormant in the ground and in our hearts begin to stir and swell. The ground begins to breathe again; the tidal flats break out from their icy armor and fill the air with their pungent perfume bringing calls of joy from shore birds. We hang out laundry in the March breezes. On sunny days, multi-colored sparkles and flashes shoot from drops of water on icicles hanging from broken maple twigs. The radiating rainbows pierce our icy hearts as March marches on.

We have noticed returning blackbirds and hawks, and there are reports of chipmunks out of hibernation and chickadees singing their spring song. Expect to smell an exuberant skunk some morning soon.

One recent cold day we watched the crows in the pasture out back scouting around with their bandy-legged gait and ebony feathers ruffled by the bitter wind. What could they possibly find to eat out there? They do eat worms like the robins but they aren’t going to find many worms in that frozen ground.  They do eat insects too, but the same holds for that. We concluded that they are likely scavenging in the fallen detritus of the whole winter past, laid bare by the melting snow and ice cover. Maybe they are finding seeds, dead insects, or even a dead mouse or two. Crows are preeminently omnivorous. They are eating the past, much the same as we do when we enjoy potatoes, carrots and other root vegetables, winter squash and apples and other produce of the land, or that frozen backstrap of venison our late neighbor gave us quite a while ago.

Next thing we knew, the hardy crows were gathering dead grass in their beaks and flying off to a suitable nesting place, making the future from the past.

When I met him, Allie Ryan was an old man living in an old house in South Brooksville, the house being a museum of his own making. He had collections upon collections until there was hardly room left for him. But the most significant was his collection of relics of all kinds relating to the Maine seafaring life: huge model schooners, oil paintings, photos, books and newspapers from the age of sail. He was a true lover of history. When he died many of the nautical items went to the Maine State Museum in Augusta for educational purposes. Allie, too, was fed by history and nourished by the past. I think about what we are leaving behind to nourish generations to come. Will they feed on our history of violence and greed and microplastics, or will they be nourished by justice and kindness, clean air and water, and good wholesome food? History will surely judge us by the nurturance we leave behind.

There is something about the afternoon angle of the sun on the water of the bay these days that makes it look like hammered silver or maybe millions of floating diamonds, almost blindingly bright. One sage of Sargentville is quoted as saying, “When the water looks like that, it’s maple sugar time.”

It may be a little early yet, but we can expect symptoms of Spring Fever to show up any day now. These may include romantic feelings, wanderlust, cravings for novelty, an urge to rearrange the furniture, dreams of a new life or a new mission in life, and visions of a new world. We say that we have Spring Fever but the truth is that Spring Fever has us. It is a universal affliction from the swelling pussy willows to the chant of the cardinal to the honks of returning geese and with similar symptoms. It’s wise to pay attention to these symptoms, not to ignore them or dismiss them too soon, because our Spring Fever may be telling us which way we need to go, and which way we need to grow. 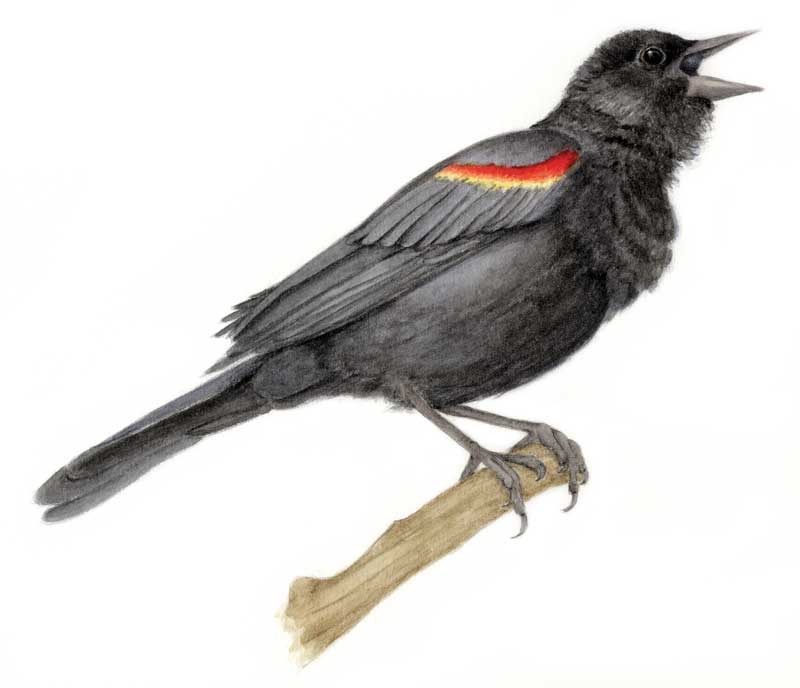 April in Maine can be about as different from March as a woodchuck is from a groundhog, that is, no different. Both months mean gray skies, chilly nights, and a daily fire in the woodstove. But while March is about the return of the sun, April is about the return of fresh water as the snow and ice melt, and streams and rivers are released from their icy fetters. April means the sound of rushing water, ice jams and flooding up north, and some sport fishermen waiting too long to bring in their ice fishing shacks, with predictable results. April also means the steady patter of showers and rolls of thunder pierced by the rain song of the robin as April’s avian avatar sings a hymn of joy and gratitude for the feast ahead as the rains drive worms up out of the ground.

As they have always done, the red-winged blackbirds have returned to these parts with their thrilling liquid trilling surpassing Mozart or Schubert. The song sparrows and chickadees have chimed in with their delicate descant. The ravens soaring over the town and the mountain have added their gurgling alto to the chorus. The freed waters of the mill brook now take up the tenor part and the tidal falls the bass. The downy, hairy and pileated woodpeckers and the partridges begin drumming on dead trunks and logs their percussive accompaniment to this first movement of this symphony of Spring. The vast open-air concert hall that is the North Woods is not as bleak as it was even a week ago. It is being decorated with subtle colors and arrangements that would make Claude Monet weep. The sap is rising in the oaks and maples. The fine branches of swamp maples are turning red against the gray as their buds push out; and the bark of red oaks is swelling to show stripes of dusty rose alongside the rough gray we have seen all winter. The dark wands of pussy willows are dotted with spots of near-white as their soft catkins push forth during the warmth of the day.

We enjoy—or endure, depending on your frame of mind—an exquisitely long season of spring in these parts, from Groundhog Day in early February until the apples and lilacs come into bloom at the end of May, a good four months. But our great comfort is in the ageless familiarity of this recurring, synchronous symphony. Our souls are stirred by its opening notes, like Beethoven’s Fifth, reminding us of the whole composition that will perform itself in the months to come: this concerto, this oratorio which has been hailed by a thousand generations, and no critic would dare deride. Maybe we cannot clearly see, as the ancients could, the Great Composer and Conductor directing this symphony from a podium high above. But we can still watch and hear the great organic earth orchestra faultlessly responding with ageless and matchless skill and dedication to the notes of the invisible score. We can still revere the Conductor and the performers of this music of the spheres. We can still teach our friends, our children and grandchildren to shake off the death dirge of Winter and sing the song of spring. We can still join the band, take up our parched, pale and paltry instruments, breathe the dust off of them, and blow our own Ode to Joy.

Elver season is winding down, while some lobster traps are going back into the water. Boatyards are busy getting everything from lobsterboats to schooners ready for the coming season, and the race is especially hectic as summer people return earlier than they used to. The seductive perfume of big saltwater fills the air as the waters warm and the winds blow from the south-southeast, calling sailors back to the sea.

One of the most gorgeous floral displays of the year is occurring right now. Red maples are covered with masses of exotic blossoms of red orange and umber. They are equal in beauty to the Amaryllis that recently graced the window sill. The thing about red maple flowers is that they are so tiny. To be appreciated, they need to be seen with a magnifying glass. And it’s well worth the trouble. The new, translucent heart-shaped leaves of aspens are fluttering in the breeze. The delicate branches of hackamatacks are showing a ruddy shade as their buds expand and their new needles emerge. Birches too show a lively brown as their buds open and catkins expand. Apple trees are showing silver tips meaning that pruning season is over. This would be a good time for your dormant oil spray to control over-wintering insects until any green appears. Here and there the first dandelions show their sunny faces and new green grasses begin to rise.

“Those who contemplate the beauty of the earth will find reserves of strength that will endure as long as life lasts.  There is something infinitely healing in the repeating refrains of nature—the assurance that dawn comes after night and spring after winter.” —From Rachel Carson