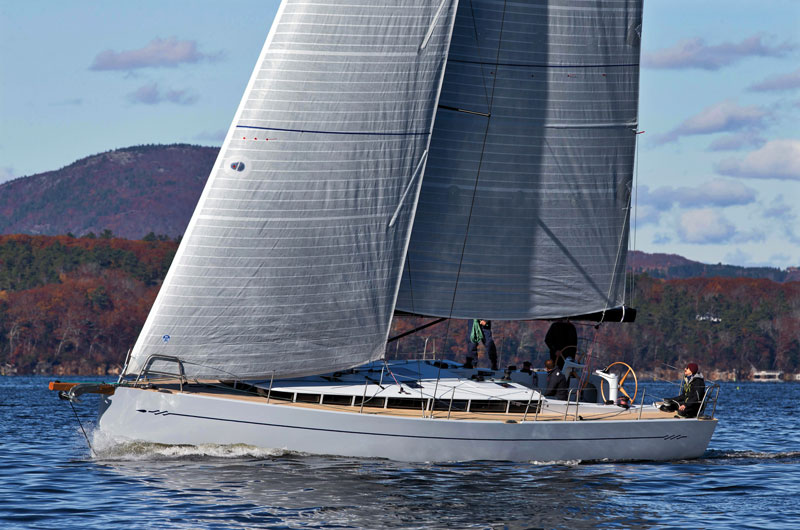 The owner of the new Tripp 45 wanted a fast, good looking boat that he could use for racing as well as daysailing. Photo by Alison Langley

The owner of Rockport Marine’s newest creation, a custom Tripp 45, was very clear about what he wanted in a boat: “I want a yacht that is notable in this size range. It should have some classical elements, but the design should also convey speed and the ability to move well through the water much like a Ferrari on land,” he told the Tripp Design office. “I would like to sail this boat for a long time, so ease of sailing, both shorthanded and singlehanded, means that simplicity and ergonomics are important. Finally, although we will do a lot of daysailing, the yacht is to be beautifully appointed with comfortable weekend cruising accommodations for two couples.”

Mist, which was launched late last fall in Rockport, hits all those buttons, maybe even more.

Like many of Bill Tripp Jr.’s previous designs, Mist features a plumb bow and stern, a nearly flat sheer, and a wedge-shaped deck. The sail plan includes a square-topped main, a jib, a code zero sail that flies off the long bowsprit, and a rolling staysail (the sails were made by North Sails, the winches and hardware are by Harken). A deep lifting keel and high sides give Mist stability, but also will allow entrance into shallower harbors—the keel, its enclosure box, heavy lead bulb, and hydraulic mechanisms, were subcontracted to Fiber Mechanics, a company in England. 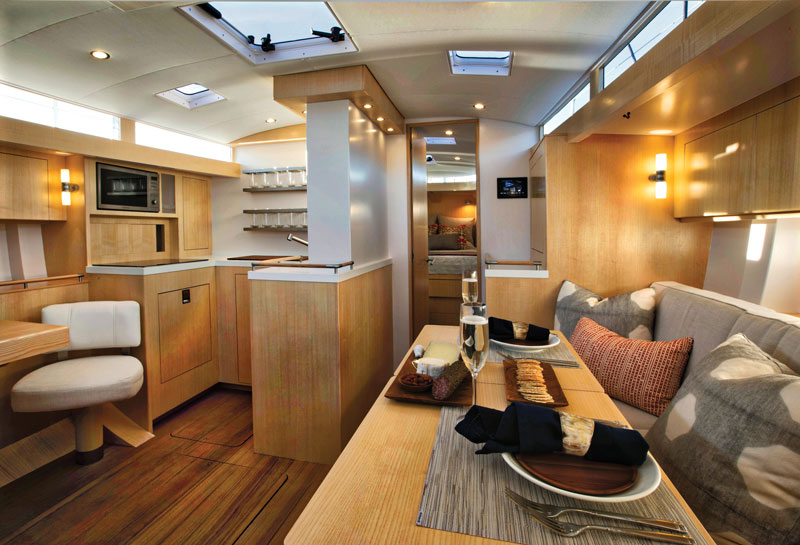 The ultra-modern hull consists of a complex mix of wood, foam, and carbon fiber, 15 layers in all, according to Rockport Marine President Sam Temple.

The decks feature lightweight and sustainably harvested Alaskan yellow cedar, and along with the low cabinhouse, are remarkably free of clutter—halyards and sheets all lead back to the cockpit but are hidden under the deck.

Elegant in its minimalism, the sleek, 45-footer boasts a roomy open cockpit, and twin helm stations that control one high-aspect ratio rudder. The main traveler runs across the sole of the open cockpit just ahead of the helm stations.

The cockpit can be set up for dining by pushing a button and hydraulically raising a Sitka spruce table up from the cockpit sole. Other Sitka touches include the helm wheels and the bowsprit, which consists of Sitka laminated onto carbon fiber. 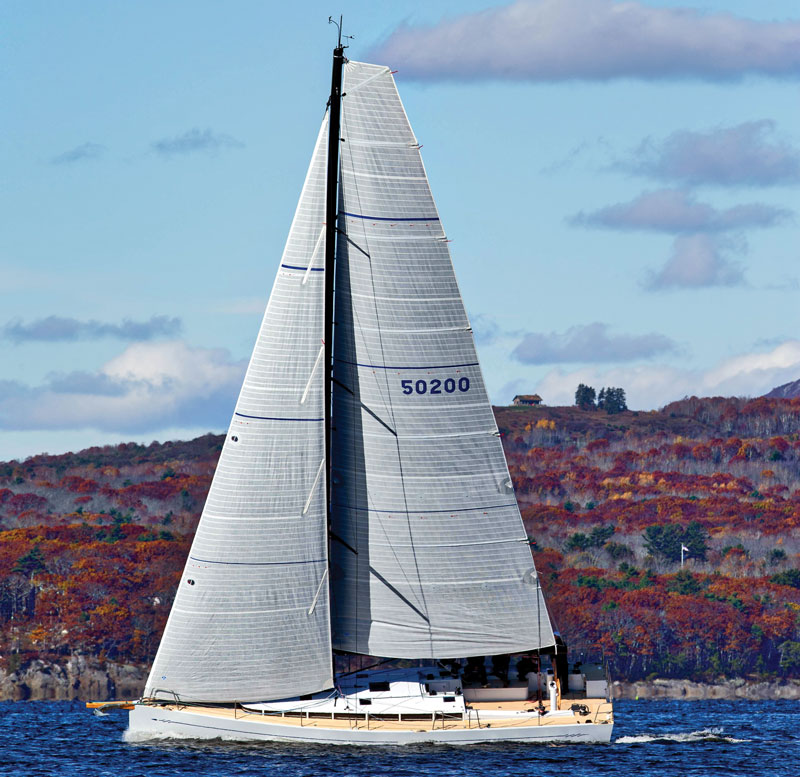 A deep lifting keel and high sides give the Tripp 45 great stability. The boat has an open cockpit and twin helms. Photo by Alison Langley

The cabinhouse is lit by a continuous row of rectangular panes with curved glass, each pane joined to the next by just a thin bead of Sitka Spruce and caulking. From the outside, the house looks low, but Mist’s high freeboard provide a great deal of headroom and the band of windows let in lots of light, which bounces off white walls, Whisper Wall padded ceiling, and pickled ash cabinetry. The cabin sole is teak. The overall effect is quite soothing. Kate Seremeth of Tack Yacht Interior Design designed the interior, which includes an owner’s cabin with ensuite bathroom, complete with a shower, and an aft guest cabin. A door from the salon leads to a second head. Although the center of the cabin is divided by the shaft for the lifting keel, the light color scheme minimizes its presence.

The auxiliary engine is a 59 horsepower Nanni with a “pancake” electric generator that will recharge a pack of lithium-ion batteries.

According to Temple, the owner plans to do quite a bit of racing, as well as day sailing. Mist should stand out in both arenas as a waterborne Ferrari, fun and fast to sail.