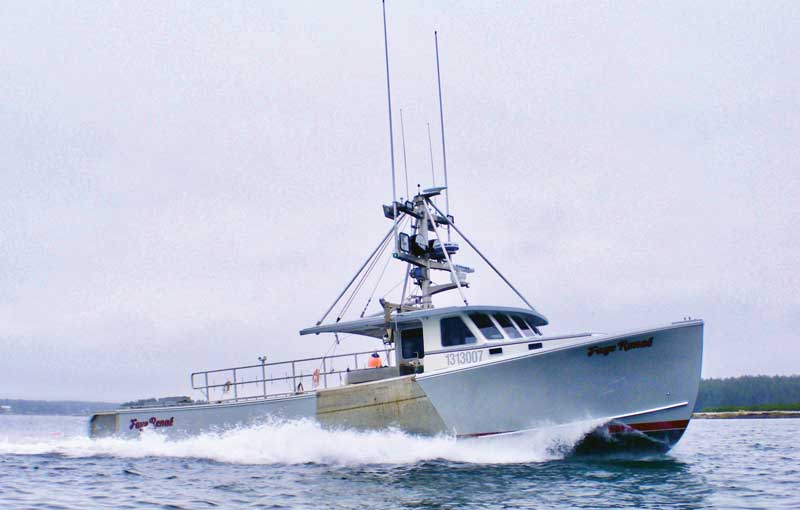 Lobsterman Ben Hardy has owned three Wesmacs over the years: a 42, a standard 46, and his new 50' x 17'6" Faye Renaé. Photo by Brian Robbins

“You better know what you’re doing, Ben, because you’ll be wishing you could eat that thing come February.”

Stonington, Maine, lobsterman Ben Hardy heard those words more than once over the years: it was the standard warning doled out by his grandfather, Kenneth “Toot” Furrow, whenever Hardy would invest in a new boat or fishing equipment. While Toot (who passed away in 2013) was definitely a mentor and inspiration to Hardy when it came to working on the water, he’d also known his share of lean times and wanted his grandson to be ready for them. Thus, the admonition about those mid-winter slumps when the weather gets tough and it’s hard to get out fishing.

Hardy, who is 37, always listened to his grandfather and still applies lessons he learned from him to his lobstering operation. At the same time, he’s pushed his boats hard over the years and got the most he could out of them; when he’s gone bigger, there’s been a good reason for the change.

Take for instance Hardy’s new Faye Renaé, a 50' Wesmac custom-finished by Clark Island Boat Works in St. George, Maine. He owned two Wesmacs prior to Faye Renaé: a 42' x 14'6" model, followed by a “Standard 46” Wesmac (which shares the same beam as the 42, as opposed to a “Super 46,” which measures 17'2" wide). Both of those were good, able boats, but as he pushed farther offshore in the winter months with lobster gear, Hardy could see where a bigger hull could pay off.

Wesmac also set Hardy’s engine aboard—a C18 Caterpillar from Billings Diesel & Marine. Hardy had powered his 46-footer with a C18, as well, although this time around, he elected to go with the 803-horse version rather than the 1000-hp model he’d had previously.

“I don’t worry about top-end speed,” Hardy said. “Your cruise is what matters as far as making money; that and getting the engine hours out of the block. After talking with Billings Diesel, it just made sense to go with the de-rated version of the C18.”

The 50-footer is the second boat Hardy has had finished by Clark Island. He first became aware of the yard a few years back when he saw “a couple of boats they’d built. I ended up visiting the shop and talking with Andrew... and I knew that’s who I wanted to build my 46-footer at the time.”

“It’s unbelievable what Andrew deals with in the course of a day,” he said.  “They have a lot going on. At the same time, I’ve always felt like he was on top of things when it came to my boat.”

Hardy said he trusted the Clark Island crew to build what he wanted with some basic guidance.

“There were a few specific things I wanted or needed on this boat,” he said. “But, other than that, I basically told them, ‘I don’t care how you do it; just make sure it’s rugged and looks halfway decent.’”

He pointed to some of the mirror-smooth surfaces around the wheelhouse: “That’s those guys; they pushed for me to let them do it that way. It’s a really talented crew and they care about what they do.”

In the meantime, Clark Island’s metal fabrication shop could probably stay busy with just the outside work they do for other shops as well as for regular customers who come through the door. There’s a good reason for that. “They do unbelievable work,” said Hardy, referring to veteran fabrication wizard John Meyers, his son John Jr., and James Ogden.

Sharing engine room space with the C18 is a 16kW genset, also supplied by Billings Diesel. Beneath the work deck aft are three circulating lobster tanks fed by 2" Pacer pumps, along with three fuel tanks, with a total capacity of approximately 1,200 gallons. Hardy said the conversation he had with Andrew regarding fuel went something like this: “How much fuel do you want?”

“All you can fit under there.”

The lobster tanks are topped off with custom hatches by Clark Island; 24" x 24" Freeman hatches from Hamilton Marine provide the other below-deck access. And there’s an extra 4' of trap-stacking space thanks to a grated extension on the stern added by Clark Island.

Faye Renaé hit the water with a 42" x 41" 4-bladed propeller from Nautilus Marine, which was “right on,” Hardy said.  Official sea trial numbers from Billings Diesel show a top speed in working trim of 18.2 knots with a cruise of 14.3 knots at 1800 rpm and a fuel burn of 27.8 gallons per hour.

As far as seakindliness goes, the 50-footer impressed Hardy soon after launching: “We were steaming into some deep stuff off outside doing 16 knots and falling right off the backs of them. There were a couple times where I thought it was going to hurt—especially where we didn’t have the tanks flooded—but she just buzzed right through them.”

That’ll come in very handy when February rolls around.