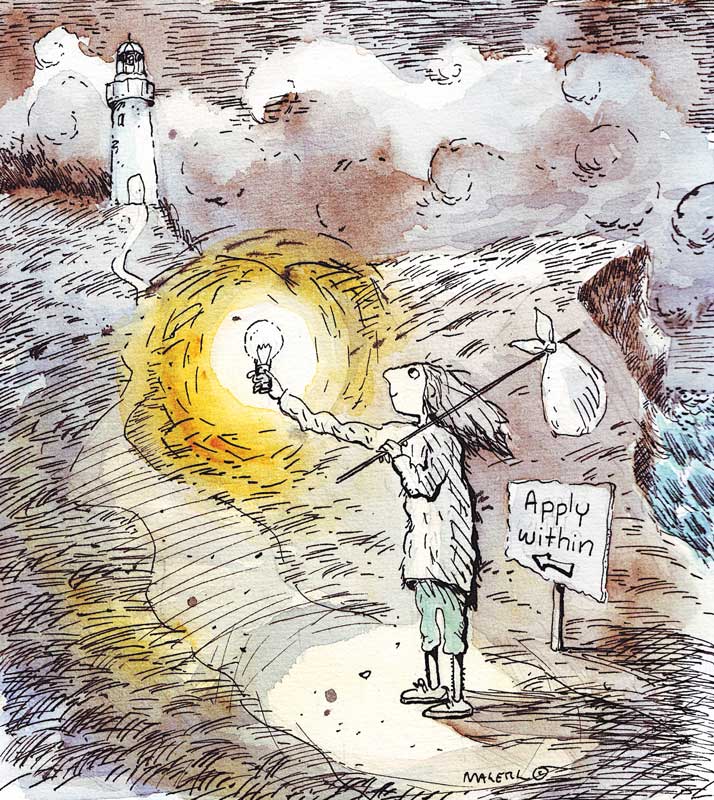 There is an old tradition of the sea, involving the crossing of the equator.

The initiate, through means barbaric or whimsical, is led to understand that this marks a moment of no return. We all have those moments. Sometimes we don’t know, until later, that we have crossed the line, a change has come; other times, it is painfully clear that we are in new and uncertain terrain.

Leaving childhood is such a cusp. The ideas of childhood linger for some time into adulthood, the strange little rehearsals we have for the life we believe we will live. I packed my bag early for that life.

When I turned seven, my parents and I moved aboard a yacht. We set out from Sydney to sail to far north Queensland. I was in and out of little coastal schools, in between traveling. Often, we were alone for weeks.

I became accustomed to the strange detachment from shore life, and from people. Water and weather were inescapable and all-encompassing; the natural world filled my mind and became my preoccupation. I began to see my future as something along the lines of lighthouse keeper, and began to gather things I’d need… rope, a compass, a survival handbook, a can opener. Lightbulbs. Stuff a lighthouse keeper needs.

When we sailed at last back into Sydney Harbour, I was 14. We moored at Northbridge, and my parents got jobs.

There was no escaping it. I was going to school for a whole year.

At Willoughby Girl’s, I began to hang out with a gang. I was invited to join the lunch routine, which was to sit in a circle on the quadrangle, roll down the socks and hike up the tunics to catch some sun. Smooth tanned legs, smooth tanned legs, and my two pipe cleaners. I liked my newfound friends a lot, but I felt that none-too-subtle fear of being on the outside.

The next morning, before school, I locked myself in the tiny bathroom aboard the yacht. I had to think. But to use my mother’s razor felt like crossing a line. Still, a decision had to be made. I shaved my left leg. Just my left leg.

I went to school. Lunch time came around, we sat in a circle, rolled down our socks, hiked up our tunics. Smooth tanned legs, smooth tanned legs… one pipe cleaner. Hello, high school.

I left home at sixteen, taking my lighthouse keeper kit with me. But I needed a job immediately, so I went to work in a hotel kitchen. At the end of the first week of work, I realized most powerfully that it wasn’t so much scrubbing pots I found hard, it was people. Like it or not, I was working in a hotel kitchen, full of hotel kitchen politics. I felt unequipped, naive and clueless. Slightly greasy.

After a few years in hotels and restaurants, my lighthouse career had sailed toward the horizon, teetered, blinked a last wild blink, and was gone.

It was a strangely painful moment, to give up my kit. The compass, the survival handbook, were useless. I started reading Steinbeck novels.

I was crossing the line.

But there was one thing I hadn’t let go. I still carried a piece of rope in my handbag.

It was a length of braided silver rope, finest quality. I’d whipped the ends with waxed twine.

It was in my bag when I got on a tour bus in New Zealand, heading for Milford Sound. Like a regular tourist, not a lighthouse keeper on vacation—if in fact lighthouse keepers go on holiday. The sound lay on the other side of immense mountains, the Homer Tunnel being the only road through. It had snowed. As we reached the slope to the tunnel, the blanket of snow obscured the road. The bus toiled up the approach to the tunnel, and soon lost traction in the slush. After several attempts, the driver put snow chains on the wheels. It was last ditch, the bus took the incline at speed, then with a violent crack from beneath the bus, a snow chain snapped. The driver stood to address us from the front of the bus, we could not make it through the mountain now.

“Unless someone has a piece of rope.”

A strangulated cry came from the back of the bus. I realized it was me.

If you have ever said something in a crowded room which caused everyone to turn silently toward you, you will know how this felt. The driver walked the length of the bus, took my prize bit of silver rope, no flicker of expression on his face. Using the rope, he lashed the broken snow chain together, for a last attempt on the tunnel. The driver gunned the diesel, hit the slope and up we roared.

This time we made it to the tunnel mouth, and flew down the other side of the mountain at a hair-raising clip.

One of my favorite movies is Hunt for the Wilderpeople, for obvious reasons, if you’ve seen the movie. In one scene, Sam Neill uses a word to describe the New Zealand landscape—Majestical.

Milford Sound was Majestical. The sort of place a lighthouse keeper would go on holiday.

Lighthouses are automated these days. The last keeper in Australia was on Maatsuyker Island, de-manned in 1995. Of course, I never stood a chance. Perhaps I might have attempted some other hermit-like career, in which I might have maintained that uncomplicated horizon. But I have a strong feeling I would have missed a lot, and you cannot have it all ways.

Shave them, or don’t. Do or do not. You must cross the line.

Lastly, rope is handy. Put some in your handbag.

Caroline Magerl is an award-winning and internationally distinguished illustrator, cartoonist, and painter who lives in Australia. She is a long-time contributor to MBH&H.