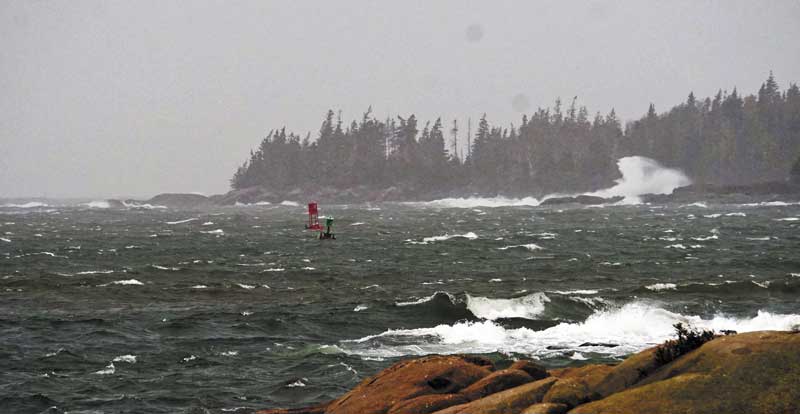 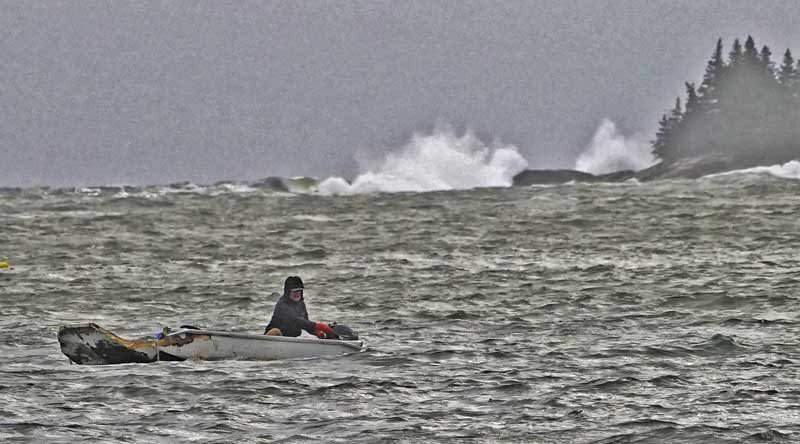 “C’mon up here,” my wife said, “I want to show you something.” It was October 2017, and an unusually powerful fall nor’easter was pummeling Maine; Vinalhaven was right in the crosshairs. She was in our bedroom and what she wanted to show me was the coffee in her cup on the windowsill, sloshing back and forth as our cabin shuddered in the gusts.

When we’d built the cabin, the guy who helped me said he could put in a cinder block foundation for $1,500. Just $1,500! But we didn’t have it, couldn’t scratch it up, so we built it true camp style: on pressure treated wood posts. And so, in that little house we’d storm watch. When the leaves turned and the sun moved south. Over the White Islands, over Little Hurricane, then the grimmest part of the winter when the sun set way behind Greens Island.

And the storms would come, immense nor’easters, humbling us with their power. We’d bring in firewood, move the snow shovel inside, lay in the groceries, ready the kerosene lamps, double tie the skiff to a tree. The gentle first flakes would quickly become a howling winter hurricane, the gusts slamming into the house again and again, shaking it hard enough to once even rattle a picture right off the wall. Our bedroom was upstairs, the bath down, so we had a protocol: when someone went to the toilet in the night, they’d take the flashlight to the anemometer, and bring the report back upstairs. Sleep was hard on those stormy nights and I’d get up sometimes, go downstairs, put another log in the woodstove, look at the anemometer on the wall: 50, 60-plus sometimes in the gusts. I’d quietly turn on the radio to the weather channel and listen to the station reports from up and down the coast. Matinicus Rock Lighthouse was 12 miles straight out in the ocean from us, and they’d report 70, 80, even 90 mph sometimes in a bad one, and I knew no boat could live in the sea that was out there. You could tell which way the wind had been blowing just by listening, sometimes even without going outside. If it had been a hard easterly, or nor’easterly, as all the big storms were, the seas would boom in on Folly and Point ledges, and onto the cliffs below the lighthouse on Heron Neck. Pounding, roaring, sometimes so loud that it’d be hard to sleep. Humbling.

In a southerly, the back side of Hurricane would get the worst of it, and it’d be a different sound, as the big granite boulders got tumbled, again and again. A sou’wester would hit Little Hurricane and the bold point at White Island Head, a different sound yet again. And then after the storm passed, the wind would go northwest and just screech, picking up water from the harbor and salting our windows—our cabin so cozy with its Monitor heater and woodstove. But when it came off northwest, you stepped from 70 degrees inside to zero or 5 degrees outside, and 40 knots roaring across the deck, plucking at your insulated and hooded overalls. You couldn’t get away from the sound of the winter seas, not unless you lived in the center of the island. Sometimes, downstreet, coming out of the post office or the store in an easterly strong enough to keep the ferry tied to the dock, a big one would roar onto the ledges just outside the harbor, and the sound would make folks stop mid-conversation to look out across the harbor at the wild ocean beyond.