Engraving a Maine sense of place 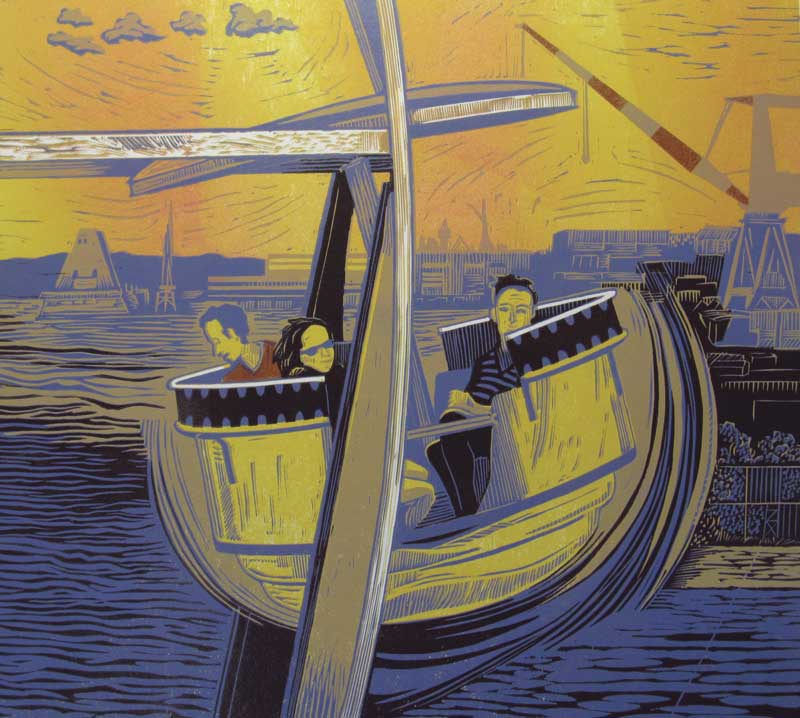 Beckman got the idea for the color woodcut The Three Friends Contemplate Engineering at Heritage Days in Bath.

Driving home to Stonington one spring night some years ago, Siri Beckman saw lights down near the shore at the edge of Deer Isle village. She pulled over to find out what was going on and encountered two men with headlamps and nets harvesting elvers, the baby eels that have become a lucrative coastal fishery.

Beckman made a quick sketch on the spot and then fleshed it out a bit back in her studio, drawing on her memory. From there, she began to develop the drawing into a wood engraving, beginning with a more formal rendering on tracing paper so she could reverse the image when retracing it onto the woodblock.

Then came the cutting, the slow process that entails figuring out which areas will be lightest, darkest, and middle tones. Along the way, several proofs were pulled to monitor progress. Beckman used six different tools for the engraving, plus six more for “special cuts.” With a good proof in hand, it was time to print (editions usually number 100). 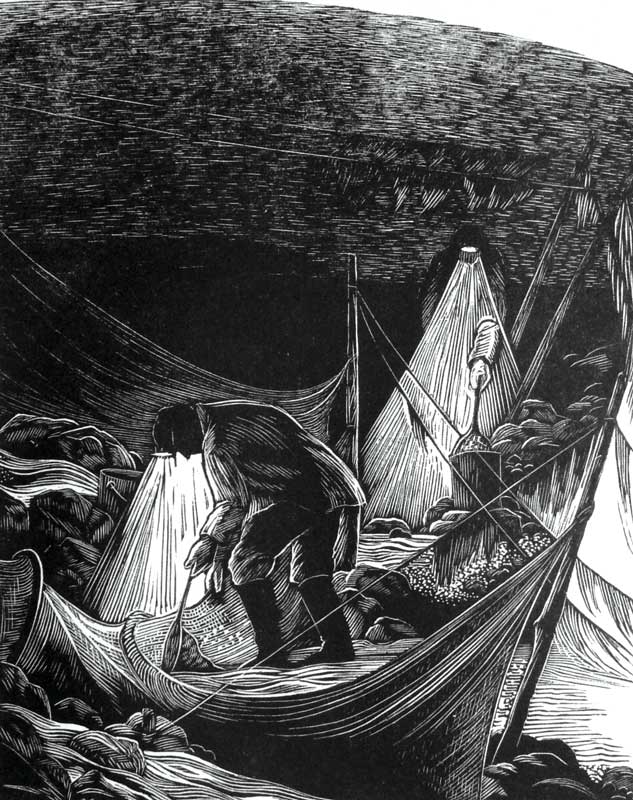 The resulting wood engraving, The Elvers, testifies to Beckman’s status as one of this country’s finest printmakers. The details amaze: the shafts of lamplight, the hull-like curve of the fyke net, the figures focused on their work, the night sky and distant silhouette of an island. As David Becker wrote in the ground-breaking survey of Maine printmaking The Imprint of Place, “the clarity and openness of line” in her work “bring a new sensibility to the medium.”

Stonington was Beckman’s longtime home base until 2017, when she relocated to Bath. That move brought new subjects. The first summer, a friend took her to a pick-your-own strawberry farm, which was later followed by a visit to a similar setup for blueberries. “Each of these farms offered great subject matter—people, action, landscape,” Beckman recalled.

In the engraving Strawberry Pickers three figures in various poses gather berries. Beckman’s lines are precise and clean, but also suggestive of form and place—the bend of a back, the winding rows of strawberry bushes that lead the eye to trees in the distance. Here and there are the small flags berry pickers stick in the ground where they stopped, to allow the next person to claim a new patch.

Another Bath piece, The Three Friends Contemplate Engineering—“Certainly my longest title ever!” Beckman noted—is one of only a handful of color woodcuts in the artist’s oeuvre. She found the scene at Heritage Days, Bath’s week-long celebration of July Fourth. She had walked up the Sagadahoc Bridge that spans the Kennebec River to get a photo of the Ferris wheel. “From the bridge I was looking right into the cars as they came up to the top position of the turning wheel. In the background is the Bath Iron Works.”

Beckman could have titled the print after the holiday, but she wanted something different. “Suddenly I realized what connected the Ferris wheel to BIW—engineering.” The marvelously conceived image captures the sway of the gondola as three young people take in the view from on high.

Some of Beckman’s print subjects originated in the six artist residencies she has taken part in over the years. The engraving Quiet Day began at Mesa Verde National Park where she lived in a hogan, the traditional dwelling of the Navaho people.

Her long-time passion for animals shows up in many of her prints. Grizzly was created after a visit to Yellowstone where she had opportunities to see the bears from her car (“at about 50 yards”). The part-color woodcut Bison: The Sixty Million with its dart board center carries an environmental message: the history of the slaughter of an iconic species that roamed the American West.

Woodcock is a tribute to an “odd bird” that lived among the alders at the edge of Beckman’s woods in Stonington. She remembers seeing a mother and her three young plucking worms with their long beaks, “all the while doing their fancy rocking footwork.” Two other bird prints, Snowy Owls and Pileated Woodpeckers, were cut as lampshade designs.

The engraving Tale of the Machias Cod, created for an article in the Island Journal, was inspired by the story of two brothers who were ﬁshing for cod in the 1940s during the war when they found a school bigger than any seen before; the look on their faces reflects their awe. As Beckman noted, cod size and numbers began declining sometime after this catch. She turned to renowned fisheries authority Ted Ames of Stonington for photos of boats and gear from that time.

Beckman produced her first book, A Dog Named Blackberry, in 1989 and has since published several more, including A Week at the Lake, 1998, the diary of a vacation taken by Grace Butterfield Dow in 1932. She has also illustrated a handful of books, among them The Tinker of Salt Cove by Susan Hand Shetterly and Crossing the Field, a group of poems by Kate Barnes, both published in the early 1990s.

Beckman finds that illustrating a book usually requires using her imagination to compose the print. Sometimes she can use actual models “like trees, buildings, objects or interiors,” but just as often she has to dream up the composition. There’s also research involved in many cases. Shetterly’s The Tinker of Salt Cove offered the greatest challenge: With its historic setting in Maine’s past and a main character who walked on stilts, the story demanded a lot of conjuring up.

And although she has never owned a sailboat, three of Beckman’s prints represent memories of sailing trips: Perfect Day, Almost Home, and Phosphorescence. 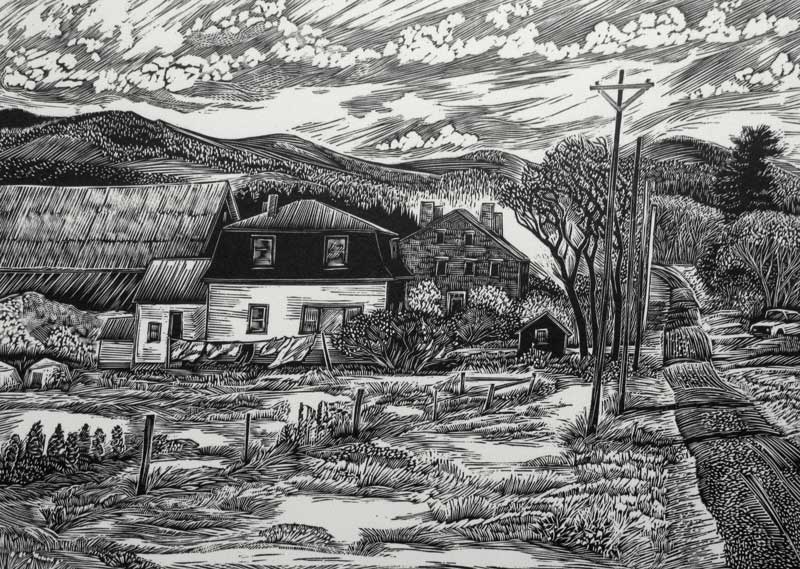 The engraving The Carter Farm came about after Beckman took her printmaking class at Gould Academy to a local dairy farm.

Beckman was born in Chicago in 1942. Early on, she displayed a talent for art, taking after her father; he was an advertising illustrator who really loved painting. She attended Lake Forest College, majoring in art history and biology “with some thought of going into medical illustration.” She also worked in her father’s studio and on Saturdays studied at the School of the Art Institute of Chicago.

Post-college Beckman worked for Encyclopedia Britannica as a researcher: “I was [the human equivalent of] Google along with six others who plied the shelves of the Chicago Public Library for answers.” She also did a stint as a graphic artist in public relations at the Cincinnati Public Library.

In 1975, following a divorce, Beckman decided to drive from Cincinnati to Deer Isle at the suggestion of a friend who had connections to the Haystack Mountain School of Crafts. In preparation for the trip, she searched the library for books on Maine and came across Eliot Porter’s Summer Island. The book featured several black-and-white photographs of Stonington, images that spoke to Beckman. 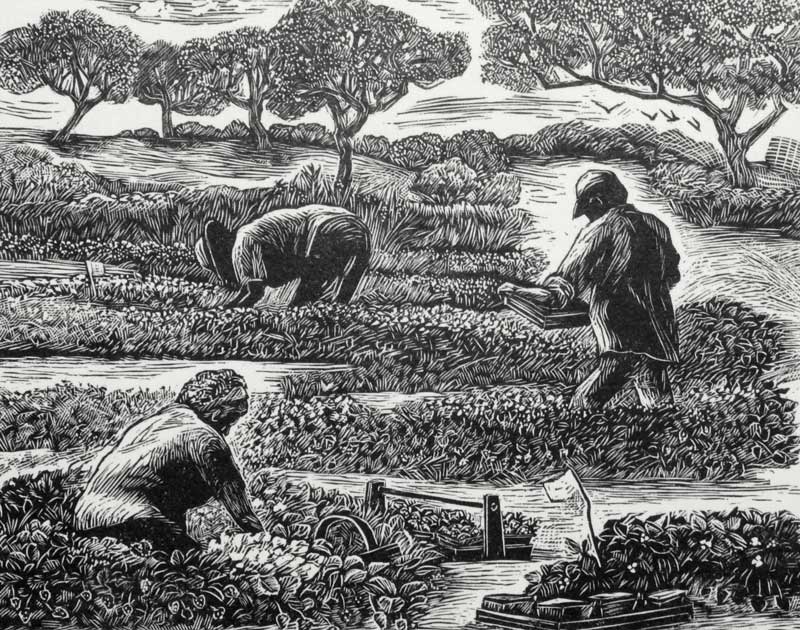 Beckman creates her prints to celebrate her life with others. Shown here is her wood engraving, Strawberry Pickers.

She rented a small cabin on Sand Beach Road, surrounded by rosa rugosa, with a view of Little Island. Every day she drew in her new journal. It was during this visit that she decided to become an artist. She had found a community of creative individuals and saw the beauty of the place. Before heading back home to Ohio, she signed a lease for an apartment overlooking Stonington Harbor.

Beckman returned on October 1, 1975, with a plan to stay for six months, enough time to mull over her future. With the arrival of winter, she took a job as a graphic artist with the local newspaper, the Island Ad-Vantages. Later, she made illustrations for Farmstead Magazine and the Island Journal. She and some friends started a co-op gallery, which had a nine-year run. She was home.

Stonington provided more than gainful employ and a place to make art. Beckman met her mentor there, the painter Bruce Le Dain (1928-2000) from Montreal who came to Stonington each year to paint. “Over the years I learned a lot from him about art, composition, light and dark, subject matter, galleries, framing, life’s choices, and much more.”

Beckman also discovered wood engraving. Helping a recently widowed summer resident sort through her husband’s legacy of a career in illustrating, she came across Malcolm Salaman’s The New Woodcut published in 1930, which included wood engravings from 15 countries. When she expressed excitement and delight at her discovery, the widow offered Beckman her spouse’s wood engraving tools and a block of end-grain boxwood, one of the finest she would ever cut.

Wood engraving had many attractions for Beckman, including the fact that it could be done in a small space with a minimum of materials and printed by hand with a baren, a hand tool used to burnish the paper. Learning about master printmaker Barry Moser, she traveled to Boston to see his work, “every line perfect.” Her ﬁrst printing press, a Vandercook, came from the shop that printed Moser’s engravings.

Beckman also liked the scale and intimacy of the medium, finding its black-and-white nature satisfying. Contrast and direction of the cuts made the prints “dramatic and dynamic,” she noted; and it was possible to create texture.

Most of all, engraving was personal. “I created my prints as a celebration of my life and to share that with others,” Beckman said.

Sometime in 1990 while wandering the stacks of the University of Pittsburgh library, Beckman happened upon a prospectus for the University of the Arts in Philadelphia. Graduate school appealed to her as did the university’s relatively new two-year program in printmaking and book arts. She applied, was accepted and was off to the races. 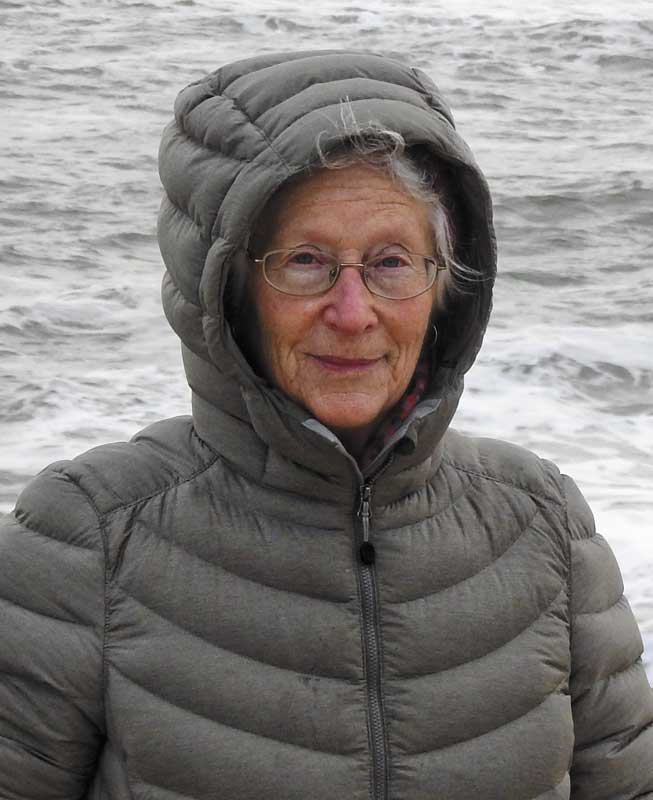 Siri Beckman by the sea. Photo of artist by Allan M. Fuller When she returned to Maine, Beckman had a six-month job waiting for her, at the Ascensius Press in Portland, one of the finest letterpress operations in the country. The press’s director, Scott Vile, subsequently helped her set up a letterpress shop in her Stonington studio. Back on the island she focused on making books using wood engraving and hand-set text.

Place plays a significant role in many of Beckman’s works, in particular Deer Isle and now the greater Bath area. She has only occasionally diverged from Maine subjects, when doing commissions, book and magazine illustrations, or during a residency. Whether an island cove lit by head lamps, a field of strawberry bushes, or a Ferris wheel in the sky, she carries us away through her exquisite art and craft.

Carl Little has written for Maine Boats, Homes & Harbors for more than 25 years. He was recently honored with the 2021 Dorothea and Leo Rabkin Foundation’s Lifetime Achievement Award for art writing.

Beckman is represented by Courthouse Gallery Fine Art in Ellsworth, Page Gallery in Camden, Turtle Gallery in Deer Isle, and Green Lion Gallery (online), and Paper Tides in Phippsburg. You can see more of her work at www.siribeckman.com.