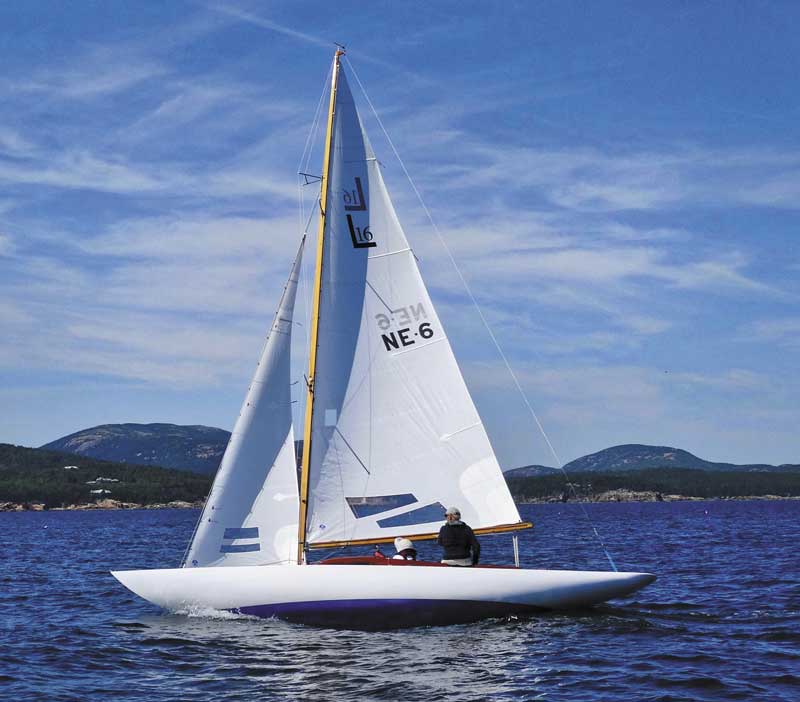 In 2016, I fell in love—again. This time it was with a boat in Jim Elk’s Spar Shop on Mount Desert Island. She was almost exactly the same age as my wife, whom I also love—and she had a history, a story of multiple owners who had lovingly seen her through her 70 years. Her name was Spirit, but I quickly discovered that her original name was Romp. In 1946, she and some 26 other Luders 16s had come to MDI, principally to the Northeast Harbor Fleet. She and her sister ship Frolic were bought by the Milliken family. The sight of her ignited my memories of two L-16s from the past, one belonging to a teenage girlfriend’s family and the other to the family of the woman I eventually married. Her traditional qualities had been carefully preserved, the only non-wooden component being a reinforcing layer of fiberglass on her bottom sides. Her brightwork gleamed seductively. I was smitten.

I passed the intervening winter in a sort of dream state, researching her history, getting to know her former owners, combing the Northeast Harbor Fleet books, and finally writing a history of the Luders 16 on MDI and their remarkable renaissance in the early 2000s. Come spring, I joined the fleet and got to know a great group of Luders sailors who generously shared their local knowledge and expertise. At launch day I could scarcely contain myself. Two great questions remained: Could I sail this boat and not totally embarrass myself? Who would be brave/foolish enough to crew for me?

I did know how to sail, having been through a succession of Rhodes 19s, Solings, Herreshoff 12½s, and Sabre 30s. I had a baseline of confidence and a family line going back to Gloucester schooner captains. But I had never competed in a one-design fleet on a boat quite like a Luders 16. The challenges included a deep cockpit, a beam of only 5'9" and a high coaming that made hiking out an exercise in gluteal agony. Add to that a beautifully varnished and slippery cabintop, festooned with ancient winches, that separated the crew from the mast and foredeck, a small foredeck from which the weight of an adult male could plunge the bow into the next oncoming wave. And don’t forget, the boom-suspended “head knocker” mainsheet cam cleat.

A good friend with a lot of small-boat racing experience agreed to join my crew. A bluewater sailor with several Bermuda races and even a transatlantic crossing in his resume, he was familiar with the local waters and, fortunately, had a great sense of humor. And he was willing to commit to every Friday race of the summer series. Oh, and did I mention that while lean, he stood about 6 feet 5 inches, had two titanium knees, and was the same age as my wife and Romp?

The L-16 has been described as a two-man boat with the work of three men to do. This is an apt description of our four-year career in racing with the fleet.

For virtually every Friday race, Romp was one of the first off her mooring, her sails flexing eagerly, her gleaming white hull and carefully wet-sanded blue bottom countering the heeling force as she leapt forward with anticipation and renewed hope. Her task was simple: be fast and do better today.

Meanwhile, her skipper was thinking about the phase of tide, the wind and all its variables, the set of sail, the rules, the competition. The laundry list was long. As a retired surgeon, it reminded me of preparing for a potentially complicated operation, with an important exception; at least, human anatomy is reasonably predictable. A sailing race? Somewhat predictable, but only to a certain point. And the rules? Well, at least my crewmember was an attorney. Arriving at the starting line we tested all the usual factors, sailing to windward and checking headings, timing the line and checking it for the favored end, sidling up to a competing boat and checking our speed and pointing ability. And keeping an eye on the fleet’s seemingly constant winner, to see what he was doing. 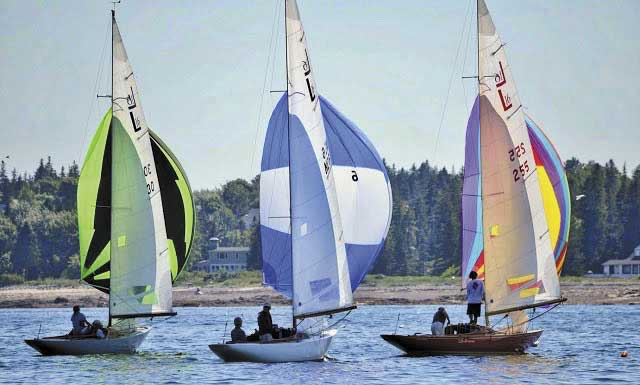 VooDoo, Romp, and Ludicrous vie for downwind lead. Photo by Sue Charles In August anywhere from 10 to 15 Luders would be on the line. Most Fridays saw the usual blue skies and an afternoon southwesterly. But on one particular day, the wind blew easterly. By my careful pre-start calculations, the right side of the course was favored. We had a pretty good start and quickly tacked over to port. Romp felt great! Self-congratulation was, however, premature. The fleet’s seemingly constant winner and about 80 percent of the line remained on starboard, heading left. How could this be? We finished in what would become our usual middle of the pack. As we crossed the line, I asked our Fleet Manager on the committee boat why virtually everyone went left after the start. “Don’t you know?” he replied, “In an easterly, everyone does that! It’s always been that way.” Go figure.

Approaching and rounding the windward mark is an experience, what with accurately finding the lay line, following the rules, setting the spinnaker pole, rounding the mark without being set by an aggressive tidal current, and—finally—setting the kite. The real adventure, however, begins downwind, approaching the leeward mark.

Being somewhat more ergonomically adaptable, I was our self-appointed foredeck guy. My job was to nimbly navigate the obstacles presented by a deep cockpit, a slippery cabintop, and a pretty small and often rolling foredeck without falling overboard, while also attending to spinnaker jibes in as little time as possible. Otherwise, I attended to sail trim, kept an eye on the rest of the fleet, and looked for wind.

Leeward mark rounding is simple enough if there are no other boats, if you have spinnaker dousing down to a science, and if the post-dousing cleanup and hardening up to close hauled is almost reflexively organized. Some L-16s in the fleet were more recent and modified fiberglass versions that featured spinnaker bow launching tubes and special pole arrangements, precluding the need to ever leave the cockpit. On Romp we did it the old-fashioned way. Douse to windward or to leeward? Either decision requires the halyard to function normally. On one memorable day, it jammed and in solving this problem we found ourselves about a half-mile downwind of the course. But even if the halyard behaves and the kite douses without incident, you find yourself with an acre of slippery Dacron and a snake pit of attached lines on the cockpit sole, all the while rounding the boat up to close hauled with its attendant angle of heel. And the turtle on the bow? Forget it! But wait! The course has another spinnaker set.

I am convinced that spinnakers were invented to cause trouble, create mistakes, and endanger the lives of septuagenarians. I actually went to a sailing school in order to become a better foredeck guy, among other things. Their boats were of similar length to our Luders, but otherwise entirely different. For one thing, the cuddy had a sliding cover that made spinnaker dousing a relative cinch. Also, cockpit launches were routine, avoiding those nasty episodes of turtle stuffing while hard on the wind. Sheet and halyard cleats were logically and, yes, ergonomically placed. Oh, and I might add, a crew of four. Returning home, I tried to adapt some of these features to Romp. I wasn’t about to butcher the beautiful varnished mahogany cabintop, however.

I started having wild and crazy ideas, such as using a sleeve to contain the spinnaker, much like the rig for gennikers on cruising boats. I had successfully used one of these on my Sabre 30. One day we gave this a try in our pre-race maneuvers, well away from the eyes of the rest of the fleet. The weight of this concoction was simply too much for the halyard’s snap shackle and we wound up with no spinnaker and a stranded halyard. And so it goes.

In virtually every race, our progress was noted and commented on by a spectator boat that contained my wife, her boat-owning friend, and a revolving cast of guests. The most frequent and possibly least helpful observation was, “Are you wearing your life jacket?” They regularly and, I think, gleefully noted our position at the first windward mark that on most occasions needed improvement. Our preferred spinnaker set was, of course, the bear away. For me, a jibe set was simply out of the question. Better to get a good set and then do a controlled jibe if conditions warranted. Meanwhile, the spectator boat would remind us that we had just lost five places. Now, my wife is an experienced sailor, having crewed in the local IOD fleet for a skipper who won a lot of races. Her standard was a high bar, her hopes for her husband equally high. Would she come aboard Romp and assist in the experiment? Simply put, absolutely not! And in the end, this was a good decision.

In our four years of racing, Nat, Romp, and I had a really good time. On balance, the high points outweighed the low, although I grated from failing to live up to my own expectations. Surgeons can be like that. Learning to race successfully turns out to be quite difficult. It is all in the execution.

I learned a lot about myself, now approaching octogenarian status, and what I love about sailing. Sailing people are great for the most part. They love their boats and treat them as revered family members, in many cases as old as their ancestors. They are generous with information, especially for my inquiring historian’s mind. They love place and connectedness with both people and the almost sacred waters they sail in.

For my part, I have decided that I am a dreamer. And my fathers knew of wind and tide, and my blood is maritime, as Stan Rogers once sang. I love sailboats and the way they harness the invisible wind and drive forward, pushing aside water and foam into a perfect hiss along the leeward quarter.

These days, I sail a Cape Dory Typhoon up and down Somes Sound. It is named, appropriately, Dreamer. My wife lets me single-hand this little boat and I love the solitude and the testing of the wind and tide in that beautiful place. Dreamer is not the boat that Romp was, of course, but at my age she is a whole lot simpler to sail. The essentials are all there, as are the memories. And without other Typhoons around, she is FAST!

Bill Horner grew up on MDI and practiced general surgery for 38 years. Since retiring in 2007, he has immersed himself in local and regional history, presided over the MDI Historical Society, and founded the History Trust.