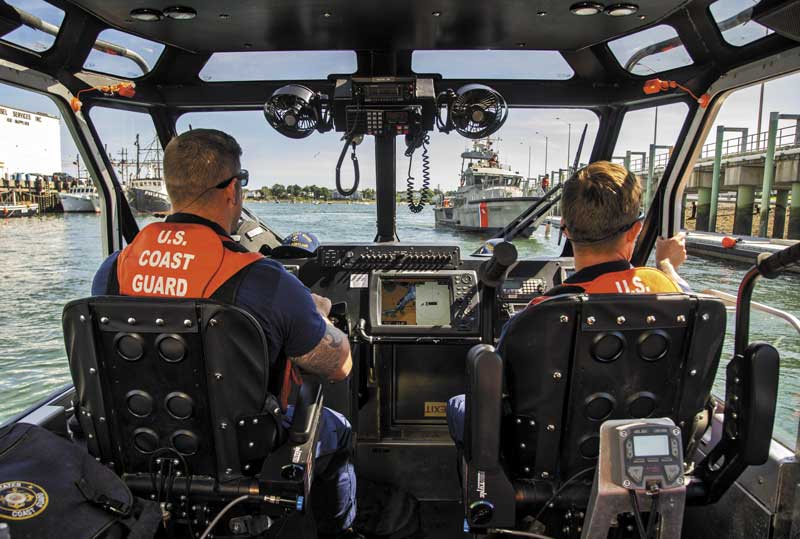 One of the great attractions of joining the United States Coast Guard is the chance to experience all kinds of locations throughout the nation and beyond. For Lieutenant Commander Nicholas Lajoie, there was one top choice after he joined the service in 2001: Maine.

Lajoie and his family realized that wish and were stationed in South Portland for several years before moving on once again recently. “Maine is a pretty sought-after location due to its beauty and sense of community,” he explained.

From the operational standpoint, Maine has unique challenges. The marine environment is treacherous—fog, severe weather, extreme tides, rocky shoreline, and water so cold that it can be dangerous even in the summer. But the people who rotate through Maine on two- to four-year assignments are up for the challenge. In talking with Coasties, that appears to be due to a sense of mission they all feel. It’s characterized by the service’s motto: Semper Paratus, or “always ready.” Not just words, the motto represents a willingness to help others in some of life’s worst moments. 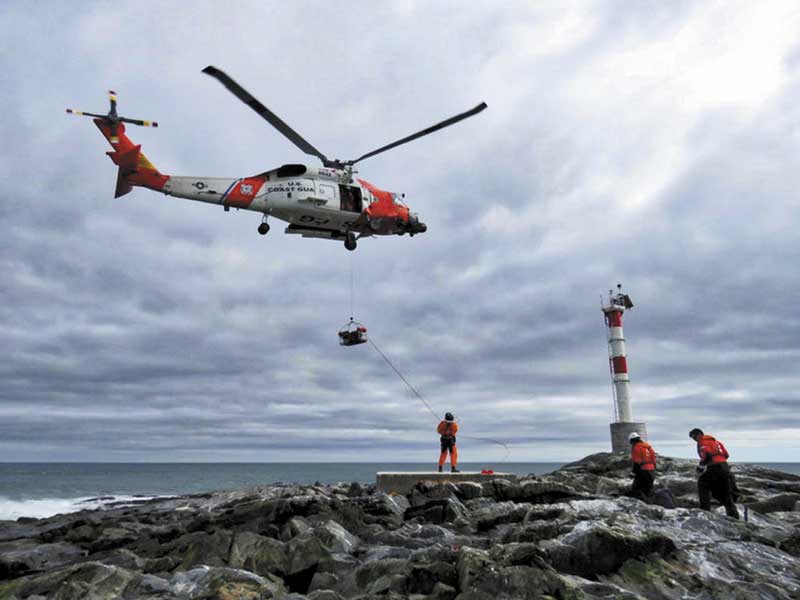 In addition to rescues by boat, Coast Guard crews also participate in and train for helicopter rescues.

“We are very much a humanitarian service,” said Captain Brian LeFebvre, who retired this year as commander of Sector Northern New England. “We are in the business of
helping people, helping communities, helping the environment.”

That sense of service is heightened by relationships—Coasties live and work with the fishermen, boaters, cargo captains, and others who find their way down to the sea in ships and hope to find safe passage and a clean and well-regulated environment.

“It’s what’s unique about the Coast Guard,” said Lajoie. “We might move, but we live in your towns and communities. We coach baseball teams and we’re on the parent-teacher associations. We are your neighbors. That’s what makes us as effective as we are.” 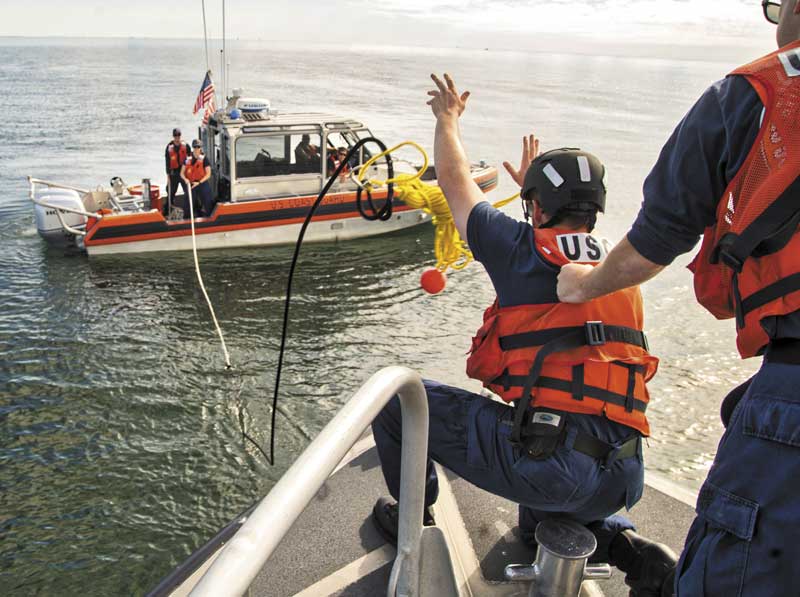 Crew on a USCG Station South Portland 47' Motor Life Boat, work with others on a 29' Response Boat, on small boat towing operations during crew general training in Portland Harbor. Since its founding in the early days of the republic, the Coast Guard has had a presence in Maine, which is part of a shared region of activity, called Sector Northern New England. The sector, headquartered in South Portland, covers Maine, New Hampshire, Vermont, and northeastern New York. Its approximately 1,100 active, civilian, reserve, and auxiliary personnel are responsible for an area that spans over 5,000 miles of coastline and 11,000 square nautical miles of water. It Includes coastal and river cargo ports that account for the movement of significant bulk and container freight, as well as cruise ship destinations and ferries and tour boats that transport millions of passengers and serve as vital links to island communities and bordering states. Other features of the sector include strong boatbuilding and fishing industries, joint protection and response missions along the Canadian border, and working with local Native American Tribal communities. 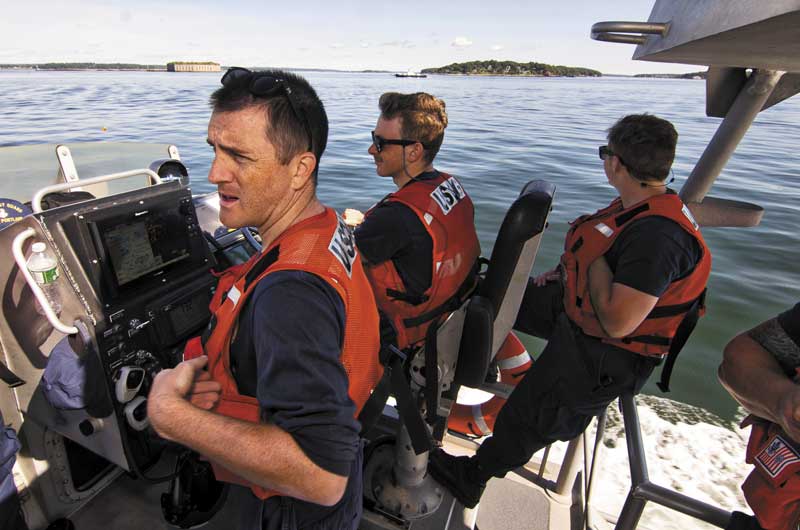 USCG Station South Portland crew members BM2 Kevin Gill, BM3 Stone Halpern, and BM3 William Tevis man the bridge of a 47' Motor Life Boat, during general operations training in Portland Harbor. The origins of today’s Coast Guard date back to 1790 when President George Washington authorized construction of 10 vessels, or “cutters,” to enforce federal tariff and trade laws and prevent smuggling, thus creating the Revenue Cutter Service. Oversight of lighthouses, beacons, buoys, and piers was added in 1794; and in 1837, the job of assisting distressed mariners. The Revenue Cutter Service merged with the U.S. Life Saving Service in 1915, resulting in the creation of the Coast Guard.

Early Coast Guard actions in Maine include incidents in 1812 when a Revenue Cutter commander stopped smugglers along Maine’s border with Canada. Later trapped by British forces in Little River, near Machias, the commander and three of his crew were captured, becoming the first prisoners of war in Coast Guard history.

These days, Maine’s stations dot the coast from South Portland to Eastport. Cutters, tugs, and patrol boats ranging from 65 feet to over 100 feet long can regularly be seen, often with local, state, and federal partners, conducting all types of missions. Search and rescues, oil spills, port and waterway security, interdictions, ice-breaking operations, marine safety and protection, vigilant maintenance of aids to navigation, law enforcement, defense readiness, and constant planning and training for both the known and unknown—these are all in a day’s work.

“Our crews’ willingness to go out and attempt a rescue or respond to an oil spill or apprehend a criminal at sea, when others are unwilling or reluctant to do so, is what makes the Coast Guard special,” said LeFebvre.

Growing up in West Springfield, Massachusetts, LeFebvre thought he’d like to be a helicopter pilot. He ended up enrolling in the U.S. Coast Guard Academy in New London, Connecticut, and never looked back. Graduating in 1997, he served from coast to coast, including the Caribbean Sea, the Gulf of Mexico, the Pacific Northwest, and the South Atlantic. In 2018, he transitioned from his post as Coast Guard Liaison to the U.S. Senate to assume command of Coast Guard Sector Northern New England. 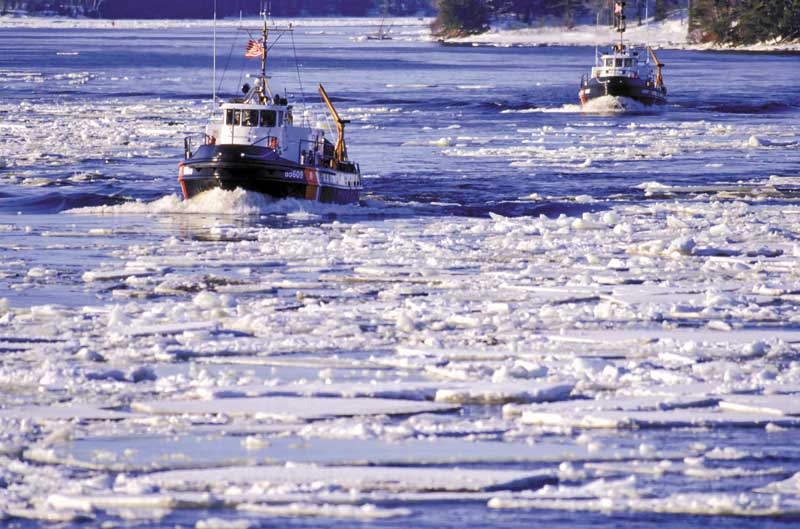 The Coast Guard's Shackle and Tackle, 65' small harbor tug ice breakers, follow behind the 147' Thunder Bay while breaking ice in the Kennebec River. The vessels work in tandem, with the larger Thunder Bay going through first, making the initial break and the Shackle and Tackle further busting the ice. Coast Guard operations, said LeFebvre, can be broken into two silos: prevention and response. Prevention constitutes regulatory work, things like verifying that ships meet standards, maintaining aids to navigation, and clearing inland shipping routes of ice in the winter. On the response side, the Coast Guard is perhaps best known for search-and-rescue, as well as law enforcement and environmental response. Missions are often conducted in collaboration with other agencies, such as the National Oceanic and Atmospheric Administration, Maine Marine Patrol, and the Department of Environmental Protection. Coast Guardsmen develop an intimate understanding of their work environment.

“These folks are on the water every single day and they’re partnering with marine patrol and other state and local agencies to learn about the dynamics of the area they’re operating in,” said Lajoie.

Here are just a few of the incidents Maine’s stations have responded to in recent years:

“These are not easy cases,” said LeFebvre. “Unfortunately, we’re not always successful. But the willingness and selflessness that our crew members demonstrate, to put themselves at risk for the sake of helping others, is at the core of what the Coast Guard is about.”

The summer of 2020 was particularly busy for search and rescue teams. A record number of boaters turned out, perhaps due to the pandemic and guidelines to pursue outdoor, physically distanced activities. In Maine, one of the Coast Guard’s biggest concerns was inexperienced kayakers and paddleboarders who didn’t realize they had to prepare for cold waters if they should capsize. 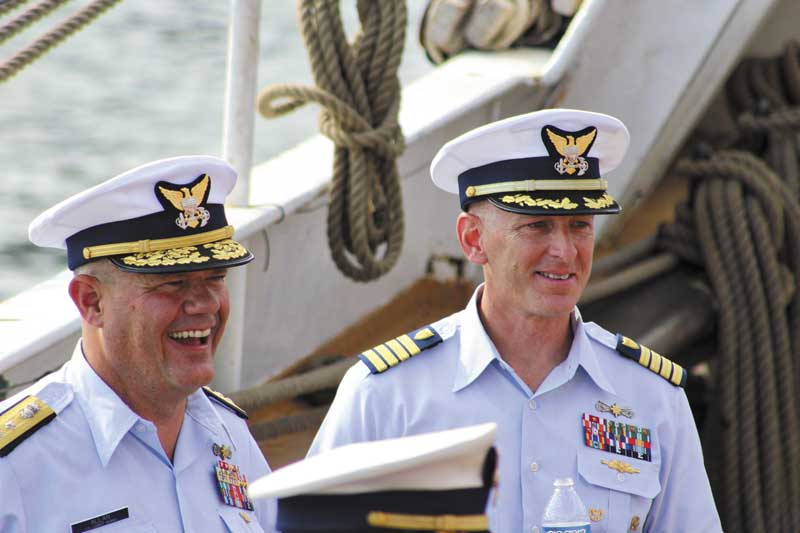 When U.S. Coast Guard Capt. Brian LeFebvre (right) recently retired as commander of the USCG Sector Northern New England he participated in a farewell ceremony on the USCG’s training sailing ship Eagle, with USCG Rear Admiral Thomas G. Allan Jr. Captain Amy Florentino replaced LeFebvre as commander of the Northern New England sector. USCG photo by Lt. JG Patrick Lachey Even during this pandemic year, “We haven’t skipped a beat,” said Lajoie. “We understand the challenges. We’re keeping our workforce safe so we can maintain readiness. We educate our crew and we provide them with protective equipment so they can continue to do the mission throughout Maine without failure.”

Contributing Editor Laurie Schreiber is also a Mainebiz staff writer and has covered topics in Maine for more than 30 years.