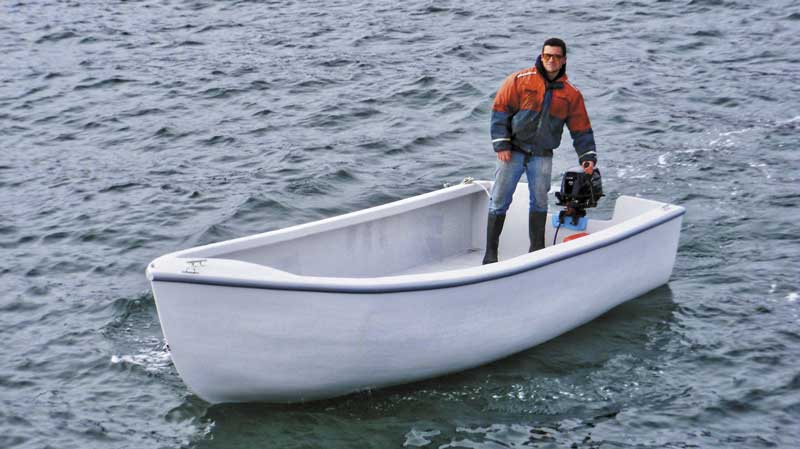 Elijah Brice at the helm of a basic version of one of his Eastporter 17s. Photo by Brian Robbins

“This is not happening to me.” Those were not words of desperation; rather, they were the words of a very determined young man looking a bad situation on the water straight in the eye.

It was November of 2019 and Elijah Brice of Eastport, Maine, was wrapping up his lobster season, having pushed the weather just about as far as you could in a 20' outboard.

Brice, who was 17 years old at the time, had fished traps that year from just off the area’s shoreline all the way out to the US/Canada boundary line in Grand Manan Channel, working alongside boats (at least) twice as big as his. 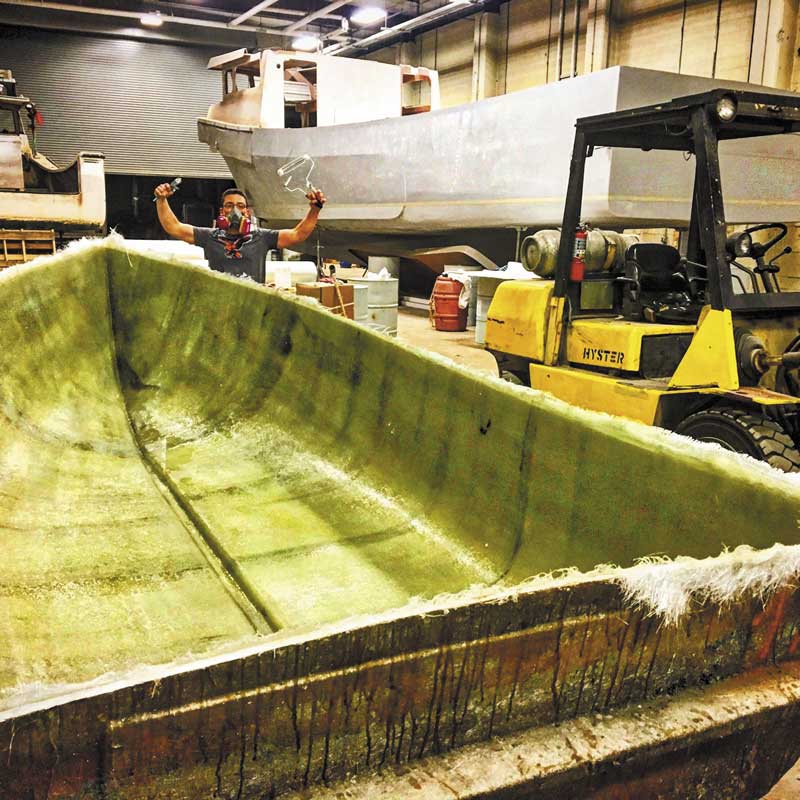 “I enjoy working on smaller boats,” said Elijah, shown here with an Eastporter in the mold. Courtesy Brice Boatworks

Brice’s 20-footer was already piled high with his final load of 4' lobster traps when a buoy he’d been missing popped up on the slackening tide (20-plus-foot tides are the norm down that way, and it doesn’t take much wind against the tide for things to get nasty). Figuring he’d find room to squeeze a couple more traps aboard, Brice began hauling the pair, only to discover they were snagged down.

He tried to work the traps clear by maneuvering in a tight circle, but nothing budged—until the warp popped out of the hauler and snarled itself into a hard knot in the davit block.

Things turned ugly quickly: unable to wrestle the snarl out of the davit, Brice grabbed a knife to cut things clear, but the blade broke off, and his spare knife was buried back aft in a covered bucket of pig hide lobster bait.

In the meantime, the stack of traps piled on his boat acted like a big sail, causing the skiff to lie crossways to the strong ebb tide. It probably would have flipped then and there if Brice hadn’t had the presence of mind to keep his outboard motor in gear and the boat circling, using inertia to help the skiff stay right-side up.

“I was just about to call somebody on the VHF to let them know where I was when everything came clear,” recalled Brice. The wooden beam that supported his davit block snapped in half, releasing the hung-down traps and allowing the skiff to right herself.

“I lost the pair of traps, but I looked over the side and said, ‘You can have them,’” Brice said. “I still had the boat, the motor, the rest of the traps, and I wasn’t in the water. It was a humbling experience.”

It was also the inspiration to get a bigger boat, which we’ll talk about in a moment.

Elijah Brice might have been born on the West Coast and spent his early years on New Jersey’s Barnegat Bay, but since moving with his family to Eastport, Maine, in 2012, he’s totally taken on a downeast soul and work ethic.

Brice is grateful for his family’s decision to relocate to Eastport: “My grandfather—my father’s father—learned about the area from family friends who had a house up here. There’s a lot of freedom and opportunity, if you want to work.”

And make no mistake about it: Brice wanted to work.

During his high school years, he spent as much time as he could on the water. He enrolled in the apprentice program to qualify for a Maine lobster license when he was 14. And when he wasn’t working on the water, he was ashore working on and around boats. 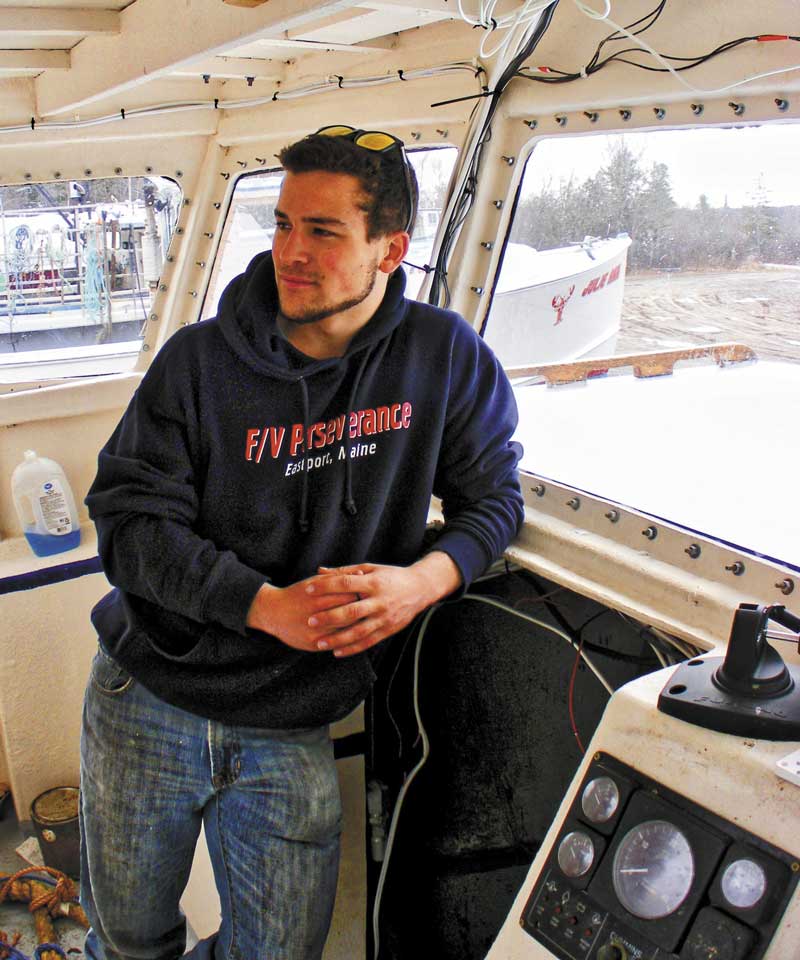 Elijah Brice—aquaculturist, lobsterman, and boatbuilder—has a 100-ton Master Captain’s License... just in case. Photo by Brian Robbins These days, Brice has his own lobster outfit, an aquaculture company (Mainely Seaweed), a 100-ton Master captain’s license (because you never know when you’ll need one), and Brice Boatworks, a boatbuilding and repair business with a stable of fiberglass skiff molds ranging from 17' to 24'. He started that business in 2018, and works out of space rented from the city of Eastport.

Brice Boatworks’ Eastporter model line was designed by George Harris of Eastport back in the 1980s when he owned Passamaquoddy Yacht Company. Interestingly, George’s son Butch Harris has played a big role in Brice’s life in Maine.  Butch was his sponsor in the apprentice program, Brice crewed with Butch for whale watch tours, and it was Butch who helped Brice build his first Eastporter.

Brice knows firsthand what his skiffs are capable of: he had an Eastporter 20 under his boots for the close call with the hung-down traps.

“One of the 17s went to an older lobsterman who wanted it to teach his grandsons about fishing,” said Brice. “With a 40-horse Yamaha, he says he can cruise 20 mph at half-throttle.”

The Eastporters are available in any stage of completion. Plus, Brice Boatworks does rebuilds, repairs, and repowers.

“For the most part, I enjoy working on smaller boats,” Brice said. “They’re more manageable for a single person.”

His biggest rebuilding project thus far was for himself: a replacement for his 20' skiff.

Brice didn’t have a particular model of boat in mind after his near-capsizing; he was simply looking for a sea boat rather than a speed boat.

It turned out that the answer to his quest was close at hand: during his tours of duty on the whale watch tours trips with Butch Harris, they used a 32' fiberglass Novi, which since then had come up for sale.

Built in the 1980s, by the late Dana Hunter of Tatamagouche, Nova Scotia, the 32-footer sported a house with a tall trunk, raked-back windshield, and an extended rooftop for sightseers—not the ideal setup for lobstering.

“The thing was, I knew she was a stable boat,” Brice said. “I figured I could put her in the shop and rebuild her into what I wanted.”

Which is exactly what he did, beginning by removing the original house and stripping the 32' solid fiberglass hull down to her bilges before turning her into the boat he envisioned.

The rebuild process included raising the hull’s sheer aft of the traditional Novi cut-down by 14" all the way around. The original 135-horse Ford Lehman was replaced by a secondhand 270-hp Cummins 6BTA 5.9, and a new fiberglass-over-plywood platform gave Brice a solid work deck.

When it came time to design and build a new wheelhouse, Brice wanted it to reflect the hull’s heritage—and give him as much work room as possible.

A trip north provided inspiration: Brice and his father ended up on Cape Breton, where they crossed paths with another 32' Hunter. “That boat had the look I was after, with the tip-ahead windshield,” said Brice. “We took a bunch of pictures and measured angles ... then I came back home and mixed that wheelhouse with some ideas of my own.” 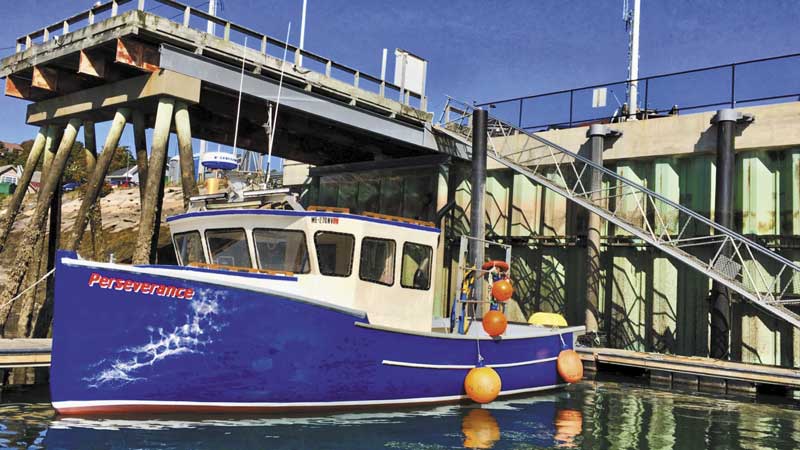 Brice completely rebuilt his 32' Perseverance (including a new wheelhouse) while keeping her looks true to her Nova Scotian heritage. Photo courtesy Brice Boatworks

The 32-footer—rechristened Perseverance—hit the water last fall, just in time for Brice to finish up his lobster season (he’d put one more summer in aboard the 20' skiff) and he was pleased with her.

While he had help along the way, Brice did much of the rebuild himself, which he feels is the right thing to do.

“The way I look at it, if someone else has to figure something out for me, what am I going to do when it comes up again?”