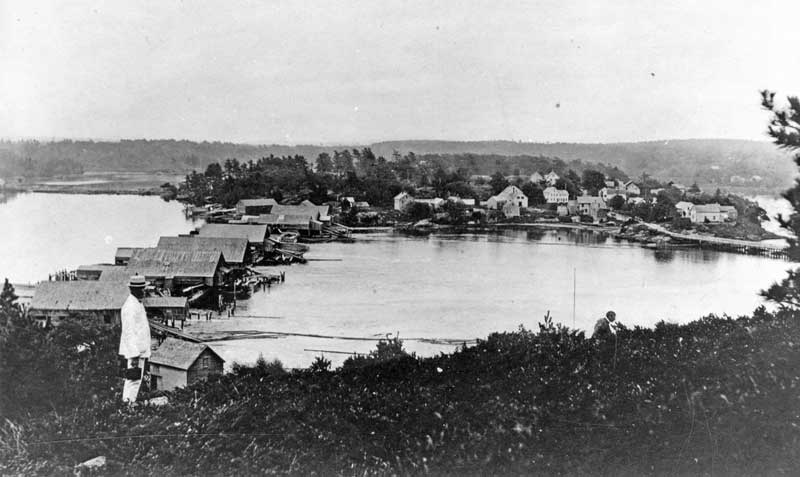 This view from the Bath shore shows the dam that held back the tide in an inlet of the Kennebec River and the eight saw mills that produced lumber for local shipbuilders as well as for exporting to distant cities. Courtesy Maine Maritime Museum

Back in the days before steam and gas engines, folks populating little towns and islands along the coast needed a way to grind grains for food and saw lumber for building ships and homes, as well as to sell for cash. They did this by harnessing the power of the tides.

Take Caleb Hodgdon, a founder of Hodgdon Shipyard in East Boothbay. His first business venture established saw- and gristmills on Sawyer Island that were powered by the tide. In 1824, he bought another tide mill at an outlet into the Damariscotta River in what is now downtown East Boothbay. That mill powered saws to cut the timbers used to build boats in his yard nearby. The mill operated until the 1940s, making it one of the last functioning tidal saw mills in the state. 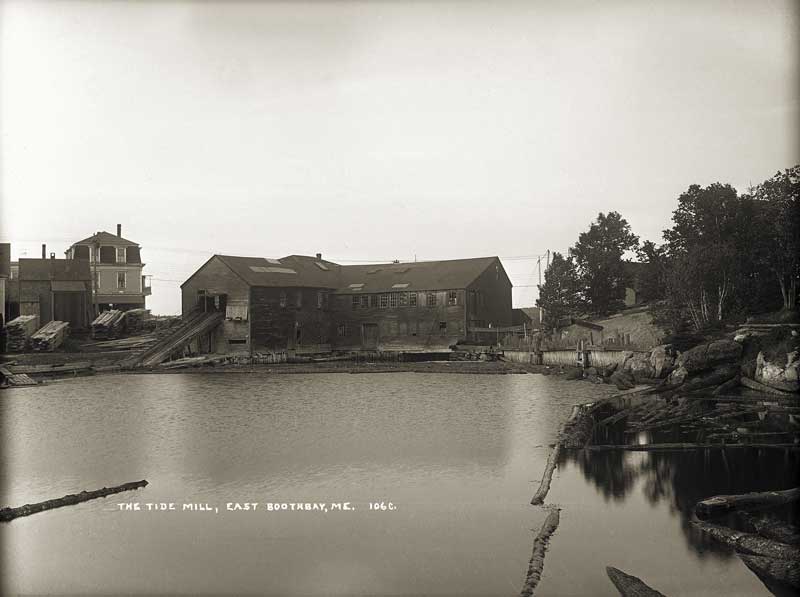 This photo of Caleb Hodgdon’s tide mill in East Boothbay was taken around 1920 when the mill was still very much in use. Note the logs in the water on the right waiting to be cut; and the finished lumber on the left. The mill was demolished in 1959. Courtesy Penobscot Marine Museum

Historian Bud Warren has spent the last two decades tracking down tide mills along the coast. He’s found more than 200 sites, both big and small. Some were documented in local histories; some are easily identified by crumbling dams. He has identified others, many in remote locations, by noting an unusual line of rocks across an inlet, or wooden posts embedded deep in the mud of tidal ponds. See a cove called Mill Cove or an inlet identified on a chart as Mill River? Chances are it was the site of a tide mill. Many sites were remote even back in their days of operation. But they were accessible to the water, and the wood they cut could be shipped out by boat.

Tide mills once were a big force along the coast, said State Historian Earle Shettleworth, “yet little is left now and no one thinks about them.”

The first European settlers along the coast were quite familiar with the concept of harnessing the tide. They knew how to build dams and to engineer mills.

When the tide was coming in, a gate in the dam would be opened to let the water into a retaining pond. The gate would be shut at high tide. An hour or so after the tide began to go out, the difference in the water level would be enough to cut small stuff such as shingles or lathes, Warren said. “After a couple of hours there would enough power from the water being conducted out of the pond to cut larger stuff like oak, or big hemlock, maybe into big stock like 4" x 6" beams or into smaller lumber for houses.” 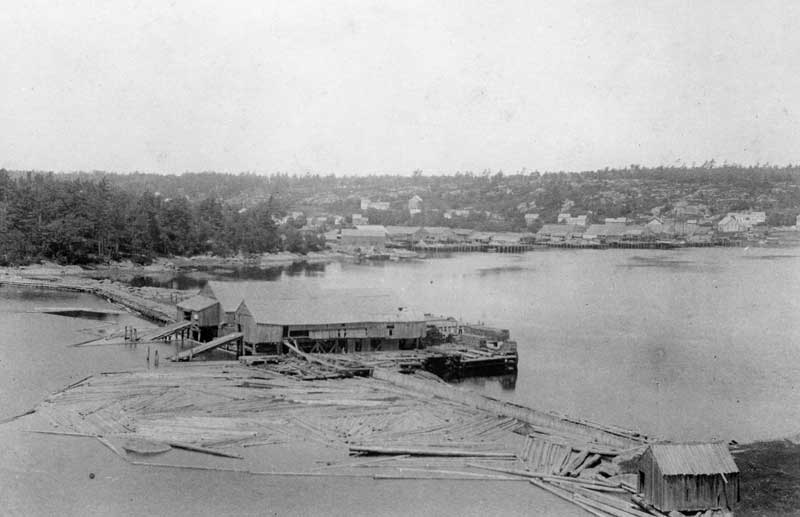 In 1801, second-generation tide miller Richard Morse leased this sawmill, according to Bud Warren. He and his descendants produced lumber here until 1930 when the mill was electrified. It continued to operate until 2015, according to Warren. You can see the Winnegance mills in the background. Courtesy Maine Maritime Museum

One dam built in 1837 in Winnegance, an inlet of the Kennebec River below Bath, once held eight tidal-powered saw mills producing lumber both for local ship builders and to ship out to buyers as far away as Portland and Boston, according to Warren. Those mills produced as much as 16 million board feet of lumber a year, he said.

At one point, there were as many as 50 tide mills just between Portland and Wiscasset, Warren added. “They were important for the economy of the coast the same way the mills on flowing rivers were in later years.”

The earliest known tide mill in Maine was built in 1634 in York. Their heyday was the 1700s; mills fell into disrepair in the mid-1800s as steam power took hold.

“Having a local mill was important in a community,” Warren said. “The easiest cash crop in those days was lumber. In addition to having small gristmills so they could grind grain or corn, they set up sawmills. And they were able to ship out good lumber.” 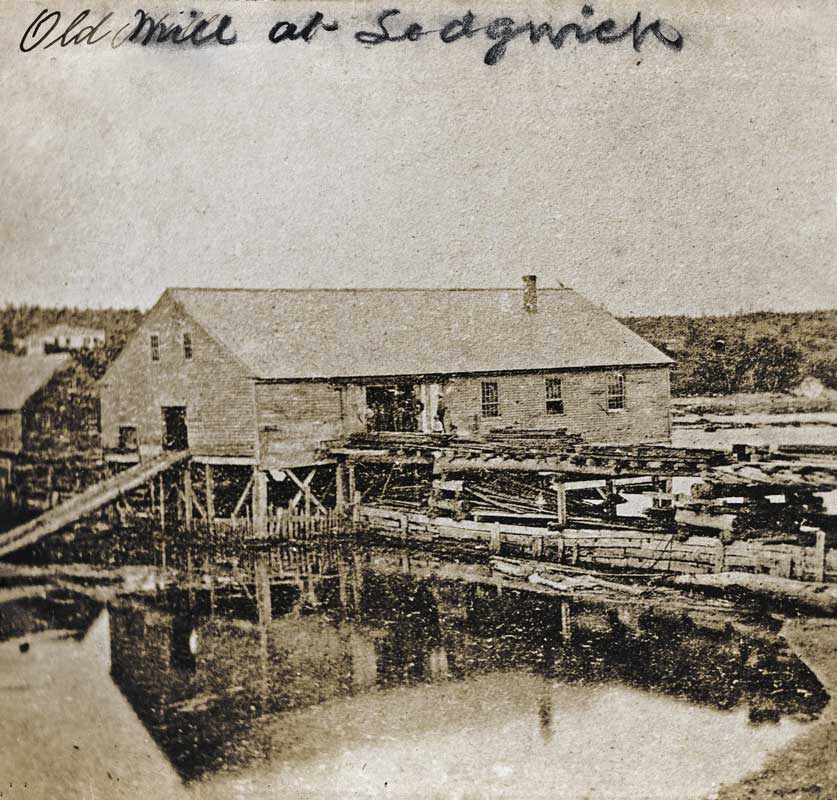 This tide-powered mill was located in Sedgwick where the bridge to Brooklin crosses the Benjamin River. It was run from from 1860 to 1865 by Ezra Eaton. Courtesy Penobscot Marine Museum

For example, in the early years on Swan’s Island, according to Warren, James Swan built a big tide mill to cut lumber on the island, and gave land grants to anyone who would come work for him. And working at a tide mill could require irregular hours that varied with the changes in the tide. Sometimes a crew might find themselves working at midnight to capture the full power of a high tide.

Warren first became interested in tidal mills during his career as a teacher. While working at the Hyde School in Bath he would take students rowing along the coast in Grand Banks dories. When they would see areas where there had been a dam, he wondered why and began to do research.

As his interest and knowledge grew, Warren and a few colleagues started the Tide Mill Institute about 20 years ago. The institute holds annual conferences and publishes a newsletter. Warren, who has written several manuscripts about Maine’s tidal mills, loves hearing about new sites. Readers can reach him at info@tidemillinstitute.org.