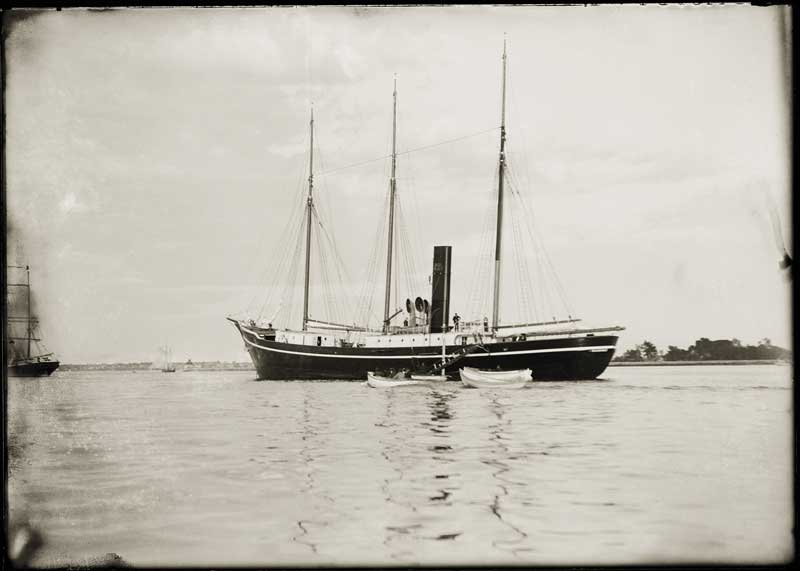 Your article in the July/August magazine was very interesting (200 years of Maine Boats). I did notice a large omission, Admiral Peary’s S.S. Roosevelt. She was built by Makay & Dix Shipbuilding Co. on Verona Island, Maine, and launched March 23, 1905. You may see that Wikipedia has the building location wrong; they say she was built in Bucksport. Thanks for your fine magazine.

According to our research, the 184-foot Roosevelt was sold a year after Peary’s voyage, and in 1917, led the boat parade for the opening of the Panama Canal. Once described as “the strongest wooden vessel ever built,” the ship ended her
days in 1937 when she was beached in Panama. —The editor

I read with interest your article on Bentley Collins and his recent retirement from Sabre and Back Cove and thought I would share this story. About 15 years ago, my wife and I, along with our 6-year-old son, were cruising in Maine on a rented 36' powerboat and spent a few nights at anchor at Swan’s Island. The weather was miserable; it rained every day, the boat had multiple leaks, and most of our belongings and bedding were wet. Despite the rain, however, we decided to take the dinghy ashore and go for a walk for something to do. As we were heading back to our boat an hour later we passed the only other boat in the harbor. It was a gorgeous Sabre with Bentley and his wife, Brenda, on board. We had never met them before but as we passed them—cold, wet, and miserable—they invited us on board for drinks and some food and they could not have been nicer. For three soaking wet strangers their hospitality was unforgettable and the interior of the Sabre was stunning. We subsequently saw Bentley at some boat shows over the years and he always remembered us and would go out of his way to once again welcome us on board. Bentley Collins was the ultimate ambassador not just for Sabre and Back Cove but for the industry at large. Ever since that special encounter with him I have tried to do the same for other boaters, and we should all try to do the same thing when we are out there cruising. He set an example for everything that is good about what we love to do.

Around 1963, I was serving as “Capt. of the head” aboard Capt. Pat Elderkin’s party fishing boat, Charlotte C., out of Boothbay Harbor before attending Maine Maritime Academy. About 4 NM south of Damariscove Island, Capt. Pat managed to harpoon what he thought was a tuna that turned out to be a white shark of about 400 pounds. Upon arrival at our pier, we contacted the folks at the then Fisheries Lab at Juniper Point, who arrived with cameras and notepads, as a white was quite unusual in these waters.

The shark was dressed and shipped to Fulton Fish Market in New York. We shared a decent price for the shark with its liver intact. Interestingly, back then many sharks were attracted to Penobscot Bay waters primarily due to the overboard discharge of poultry parts from the then “Broiler Capitol of the World”  aka Belfast, Maine—the predecessor of the famous pet seal Andre in Rockport met his demise in the jaws of a great white cruising that area of the bay.

White sharks seem to be thriving; however, other sharks are not doing so well due to the inhumane process of “finning” the fish solely for the sale of their fins and discarding the carcass. Hopefully, world regulatory agencies can put a stop to this process.

I just wanted to thank you for continuing to provide a wonderful magazine. It’s so much more than a publication about boats. It encompasses not only the rock-bound coast of Maine, but every other lovely corner of this state. Each issue brings its readers to another lake, waterway, mountain, or town to admire and then jot down on our “places to visit” list.

I am also grateful to still have a real magazine in my hands, with pages to turn. It even smells good!