A source of early prosperity in York

Barrell’s Mill Pond is one of the largest and best-preserved tide mill sites on the southern Maine coast. For nearly a century its grist- and sawmills contributed mightily to the town of York’s growing prosperity. In adaptive reuse it served successively as a site for a failed venture into exporting ice to the West Indies, a venue for the town’s sestercentennial celebration, the centerpiece of a never-completed real estate development, and finally as a municipal amenity and the site of the “Wiggly Bridge,” a local landmark. 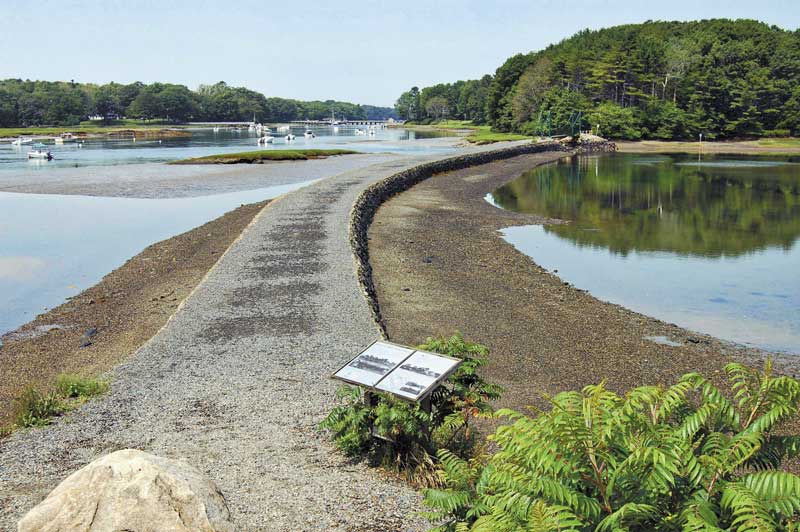 No specifications for or images of the original dam exist. The stubs of the planks visible on the inside of the causeway show that it follows the course of the 1880s ice pond dam, and therefore is on the original dam foundation, which was sufficiently substantial to support the mill buildings, and resist storm surges. In order for its crest to be above the level of normal high water it would have been five feet high. Image courtesy Robert Gordon

By 1720, York’s economy, recovering from the devastation of a 1692 Indian raid with expanded exports of sawn timber and grain, faced a potentially crippling energy shortage. Every possible water-power site on the town’s rivers and streams, even those that could turn a mill wheel for only a few months in a wet year, contained a mill. Seeking to create a new source of energy, 19 men describing themselves as the New Mills Company built a 600-foot-long dam across the mouth of Meeting House Creek on the York River to form a mill pond for tide power. The partners completed the dam with its grist- and sawmills, as well as a gundalow to service them, by April 1727. The gundalow delivered saw logs and grain from upstream sources to the tide mills, and took products for export to the wharves of the town’s merchants, which were located along the lower reaches of the river. The mill pond project, larger than any tide-power installation previously undertaken in New England, increased York’s available mechanical energy threefold. It was able to generate 63 kilowatts for 10 hours a day, year-round, free of emissions or solid wastes. 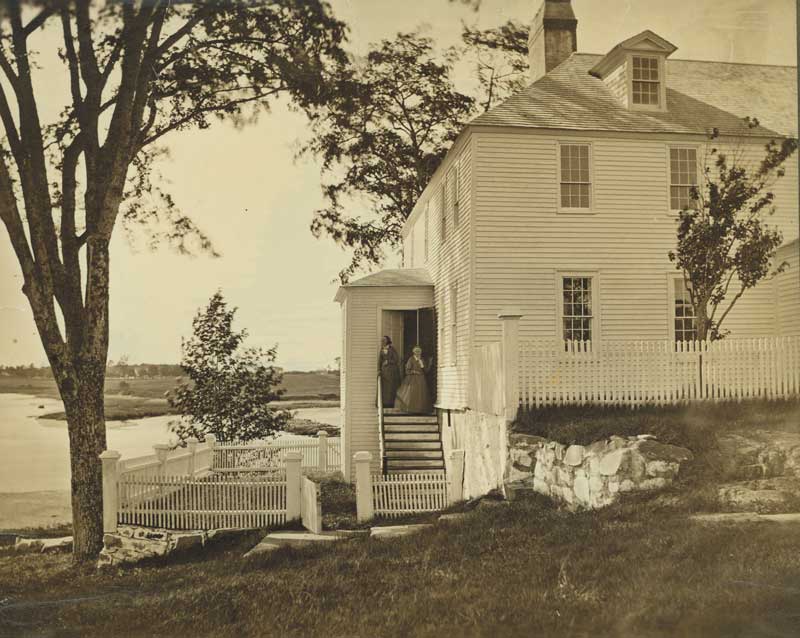 Elizabeth and Mary Barrell, shown here in 1885, lived in their family home their entire lives, taking such pride in the house that they sold the family’s mill to raise money for repairs. Image courtesy Historic New England

The mill prospered, and its shares frequently traded at their full value over the following years. Jonathan Sayward, York’s wealthiest merchant, gradually acquired more than half of them by 1789. He used the mill pond as a mast pond for his ships. His mansion, now the Sayward-Wheeler House owned by Historic New England, stands today as a reminder of the prosperity the tide mills created. In his old age, Jonathan bypassed his son-in-law, Nathaniel Barrell, because of differences about religion, and willed control of the water privilege and mills to his grandson, Jonathan S. Barrell, who took over the property in 1797. Thereafter townspeople referred to it as Barrell’s Mill Pond, the name retained today.

In 1794 David Sewall, a York resident and Maine’s first federal judge, wrote of his hometown, “There are several sawmills and corn mills, which are rather convenient and necessary than any profit to their owners.  Wood and timber have been carried away from hence to market; but there is not now more than a sufficiency for the inhabitants.” This depletion of forest resources, followed by a decline in trade during President Thomas Jefferson’s embargo, the war of 1812, and a depression contributed to the failure of Jonathan Barrell’s business. His estate and the tide mills languished through the next decades until in 1859 Barrell’s sisters, to whom he had given the property, sold the remaining sawmill and mill privilege to raise money needed for repairs to the family’s house.

Adaptive re-use of Barrell’s Mill Pond followed. York brickmakers Norton and Leavett bought it in 1873 for conversion to an ice pond. They didn’t make much progress. Ralph Lowe, a York schoolboy in the 1870s, described the dam as dilapidated, and the pond as a good place to go swimming because there was never less than eight feet of water in the pond. 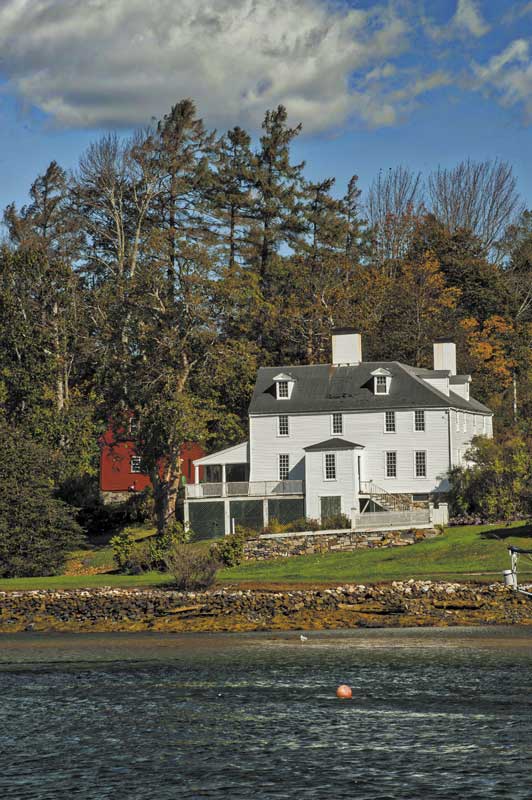 Today the Sayward-Wheeler House belongs to Historic New England, and is considered to have one of the country’s best preserved colonial interiors. Courtesy Historic New England In 1880 Norton and Leavett sold their venture to Frank Emerson, a retired mariner and a son of a long-established local family. He built ice houses and rebuilt the dam but failed to exclude sea water and bring in a sufficient flow of fresh water before the project lapsed with his death in 1887. Next, an 1897 project by real estate developers to make the pond the centerpiece of a vacation-home development came to naught. As the transformation of York into a fashionable summer resort got under way, York Harbor residents began using Emerson’s partially rebuilt mill dam as a path to their newly established country club. By 1922 the Old York Historic and Improvement Society was raising money for repair of the dam and for the bridge crossing the mill race. That bridge was later replaced by “Wiggly Bridge,” the small suspension bridge that now graces the path. Eventually the town acquired an easement for public passage over the dam. In 1978 the land west of the pond was given to the York Historical and Improvement Society to be held “forever wild” as a nature preserve, and so it remains today.

The modern causeway follows the course of the original mill pond dam. Traces of the wooden planking installed by Emerson remain visible today on the pond side of the causeway. But the topography of the mill pond has been substantially altered by the accumulation of silt, and the successive rebuilding of the dam has removed all visible traces of the saw- and gristmills it supported.

A photograph of the mill pond dam made after 1887, the year the railroad from Kittery to York was completed, shows that the western end of the dam beyond the ice-loading pier consisted of two parallel walls of stone with fill between. This dam structure was a common method of constructing tide-mill dams in New England.

Robert Gordon, a retired Yale geophysics professor, now lives in York, where he continues his interest in tidal processes in estuaries.

Alan Magee’s Conversation with the World