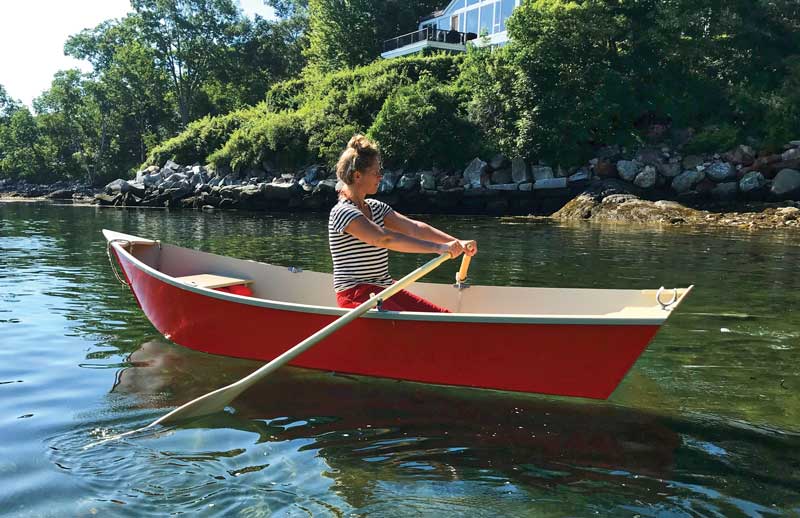 Jessica Lee Ives takes a break from making art by rowing to Laite Beach in the rowboat built by her husband, Jonathan Ives. The oarlock in the quarter knee offers passengers a way to steer the boat using a third oar.

EVERY SPRING, during the highest tide, I help my father launch his docks. All winter they are stored on slipways made of oak logs to protect them from the ice that forms along the Pemaquid River. My job is to row the three floats into position using his Monhegan skiff as a harbor tug, fighting against the winds, tides, and currents of the river. It’s a responsive little boat, and a joy to row. But last spring I decided to build a boat of my own for my wife and me to use back in Camden.

My dad said I could use his two-car garage as a workshop and that he could help me out as I needed. They say it takes three hands to build a boat and what better hand could you ask for than the founder of the Carpenter’s Boat Shop? We carried his old table saw up from the basement, along with a folding coffee table that we used as a work bench. I snapped a chalk line to mark the centerline of the boat on the garage floor and we were ready to build.

As an avid fly fisherman, I have always loved the design of the McKenzie River drift boats used to navigate the large standing waves of icy blue waters in search of wild rainbows. Its rocker bottom is similar to the Monhegan skiff. Instead of rapids on the river, Monhegan fisherman navigate large winter seas that roll through their exposed harbor as they row out to their lobsterboats. The rocker on these skiffs is the same shape and design as the bottom of a rocking chair. A rocking chair allows for the smooth transition of weight forward and backward on a flat floor. In a boat, the rocker shape allows the smooth transition up and over the face of a wave. I designed our boat to have a rocker bottom with hopes we could use it in the ocean and on trout rivers around Maine. 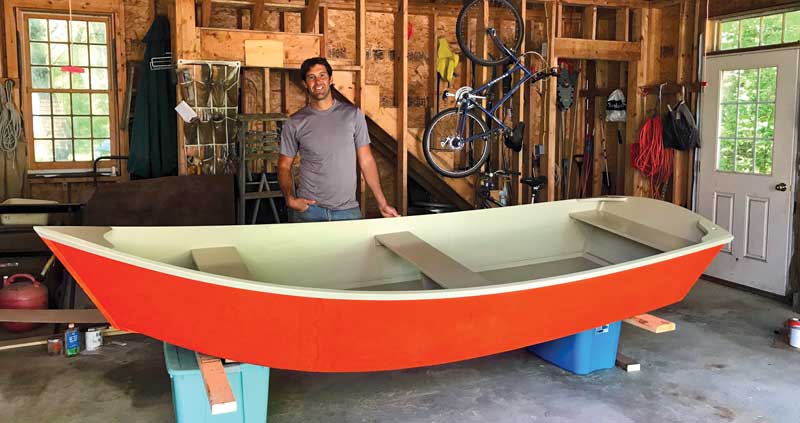 The author stands behind his work. A two-car garage is all the space needed to build an 11-foot skiff.

I wanted my boat to be light enough for my wife and me to load onto our truck, so I used pine and plywood. Boulter Plywood, a company in Massachusetts that delivers all the way to Maine, has great marine plywood to pick from. I chose 1/4-inch okoume for the sides and 1/2-inch for the bottom. Boulter sells 4x4-foot sheets along with the normal 8x4-foot sheets; we glued one of each size together with a scarf joint to create a 12-foot sheet for the boat’s sides.  I also bought two 12-foot boards of clear white pine. One board was used for the thwarts and the other I ripped into rub rails and chines for the bottom. The width of the boat was determined by the width of the roof rack on my truck. To determine the length, we set the stem up on a jig and clamped the rub rail from the stem around the center mold, and then slid the transom back until the back edge of the transom was covered by the rub rail.  That’s where we fastened the transom to the jig at 45 degrees, determining the overall length of the boat.

My dad has always used Boat Life as a bedding compound. But I decided to use West System epoxy mixed with 403 filler for all the joints. Since I wasn’t going to have ribs or inwales, this would add stiffness to the boat’s hull as it bent and flexed in the waves. The downside to this choice is it will be nearly impossible to repair parts in the future.

The chines were 3/4-inch thick white pine. It was going to be hard bending them to the inside shape of the bottom without a steam box. Many years ago I built a dory skiff designed by Harry Bryan, and was inspired by his method of building the chines. His instructions were to cut the correct bevel for the top and bottom, then rip the chine in half leaving the very end to hold the sides together. Next, fill the kerf with thickened epoxy and clamp it to the outside curve of the garboard. Then, once the glue cures, you have a laminated chine that holds the exact curve of the boat! I would advise anyone using this method to make sure you have all the glue cleaned up before it cures because 403 filler becomes hard as a rock and is very difficult to chisel or sand the next day.

After flipping the boat off the jig, we glued the extra 1/2-inch plywood together and used it for the breast hook and quarter knees. I drilled two holes in each quarter knee so we could put an oarlock on either the left- or right-hand side and use a third oar to steer the boat—if the tiller were in the middle someone would have to sit on one side causing the boat to list. I’ve always been a stickler for keeping the boat on an even keel. In the same manner, designing this boat with two rowing stations allowed for weight to be spread evenly fore and aft with two people inside. Traditionally, Monhegan fisherman always rowed from the forward rowing station with their bait barrel in the stern. The bait barrel in my boat would be my wife, Jessica, who has all the attributes necessary to pull me in, hook, line and sinker!

Jessica is a visual artist so I let her pick out our boat’s paint color from the website for Kirby’s paint company down in New Bedford, Massachusetts. I’ve always had good luck with their paint going on smooth and drying before it sags or drips. She chose Grand Banks Beige and #4 Orange, a color unlike any other but you can see us in the fog and it matches our Type II life preservers. Our boat’s reflection in the water looks just like the ocean at sunrise, so that’s the name we gave our skiff.

We launched Sunrise at Steamboat Landing in Camden Harbor and rowed over to the finger floats where we kept the skiff all summer. It’s a scenic spot with a waterfall crashing into a harbor full of tall masted schooners and with Mt. Battie as its backdrop. I always take a moment to breathe in the beauty as I tie a bowline with our skiff’s painter. 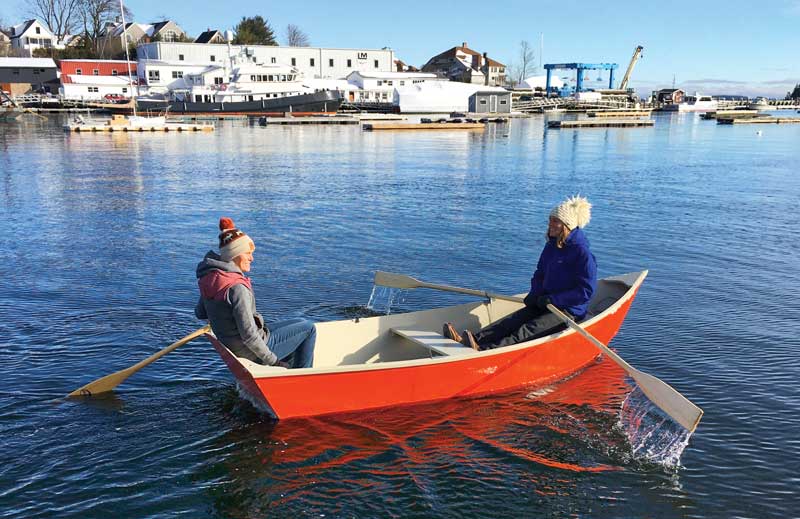 Rowing is a great way to stay warm in the winter. Jessica rows in Camden Harbor while her friend Jacalyn steers and keeps an eye out for icebergs.

Jess and I take turns, one rowing and one steering with the extra oar in the stern. The first time Jess used the tiller to steer she had trouble getting the hang of it.

“Point in the direction you want the stern to go,” I explained. That didn’t work.

“When more oar is on the right side the boat goes to the right.” That didn’t work either.

The best advice turned out to be: “Point the oar at the thing you don’t want to hit.” In Camden Harbor, full of beautiful sailboats and yachts, this was my biggest fear anyway. No one wants orange streaks on their white topsides.

It’s been six months since we launched the boat and we still use it almost every day. In the summer when the harbor is splashing with schooling fish, we row out to watch them swim to the surface with their eyes looking up at the sky in a silvery synchronized swirl. These fish have many different names—Menhaden, Bunker, Pogy—but they are all the same species. They eat small phytoplankton and zooplankton and so the only way to catch them is by snagging them with a treble hook. We fill up a small Tupperware container for our friend who uses them as bait for his five recreational lobster traps. These oily fish are some of the best bait you can get for both lobsters and striped bass.

Sometimes we bring our binoculars and watch the bright red feet of the black guillemot as it dives down to catch fish, or the beautiful white chest of a loon as it flaps its wings over the water. We know the ocean is getting colder when we see the long-tailed ducks come in for their wintering habitat and enjoy hearing their loud “ahr-ahrouleet” call. We try to mimic the calls of the loons and the ducks but usually only get looks of sympathy and distain.

Exploring Curtis Island has been the highlight of our adventures around Camden Harbor. A public park owned by the town, the island has a nature trail circumnavigating its seven acres. On the east side is one of the most beautiful lighthouses on the coast of Maine. When it’s windy we have fun sitting at the base of the tower, watching the white sails of schooners shoot across Penobscot Bay.

This November marked the seven-year anniversary of the day we got married on the hill in front of the Camden Public Library. We woke up before dawn, rowed out to Curtis Island, and watched the sunrise standing next to the lighthouse. We then spent the day reading and writing in various areas around the island. We packed a big lunch and afterward jumped into the ocean seven times to celebrate each year. I didn’t have cold feet when we got married but I sure did that day. We watched the sunset over the Camden Hills and walked down the beach to our little boat. As we pushed off from the island I smiled, knowing that the sunrise would return for another day on the water, and so would we.

Jonathan and Jessica Ives live and work above Main Street in downtown Camden. Their massage business Making Movement is designed to help artists and athletes perform to their highest potential. As believers in health and wellness, they swim in the ocean year round and see the sunrise everyday.