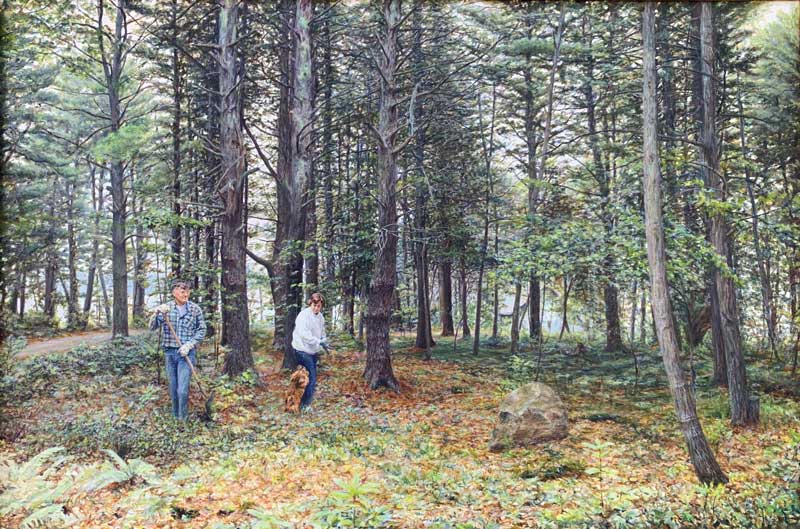 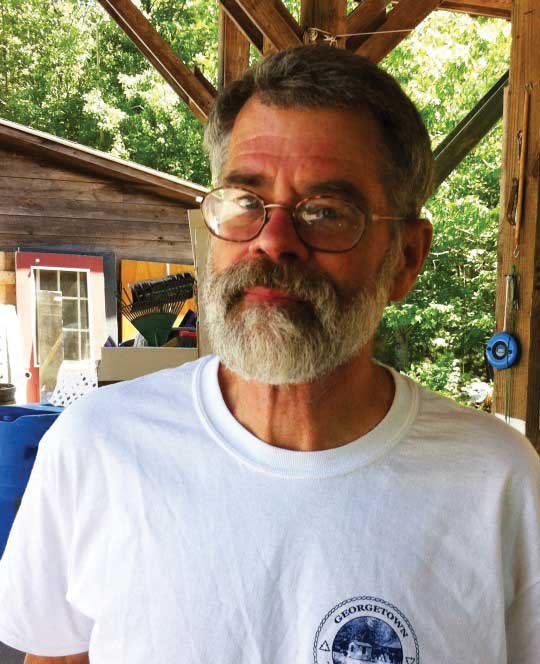 Artist Jim Coombs also works at the Georgetown Transfer Station. Photo by Desmond MacRae EVER SINCE the railroad came to Maine in the early 1900s, artists have flocked to the island of Georgetown, 10 miles south of Bath. The painters Marsden Hartley and Dahlov Ipcar and the sculptors Gaston Lachaise and William Zorach all lived and worked on the island. Today, the painter Jim Coombs lives and works there. You may not have heard of him, but everyone who lives in Georgetown knows who he is. They see him when-ever they go to the Georgetown Transfer Station, a.k.a. the dump. He’s managed it for more than 15 years.

And he’s painted portraits of many of them, too.

One of the finest compliments Coombs said he has ever received was when he overheard a man looking at a then untitled, outdoor family portrait say, “That’s Dr. Fleming!” The painting shows the Flemings engaged in a characteristic autumnal chore, raking leaves.

“I was flattered,” Coombs said, “because while it was intended as a portrait, the two figures are but a couple of inches high in a canvas almost three feet high by fully four feet wide. But the viewer knew right away who the man was, which to me, justified my approach to portraiture.” 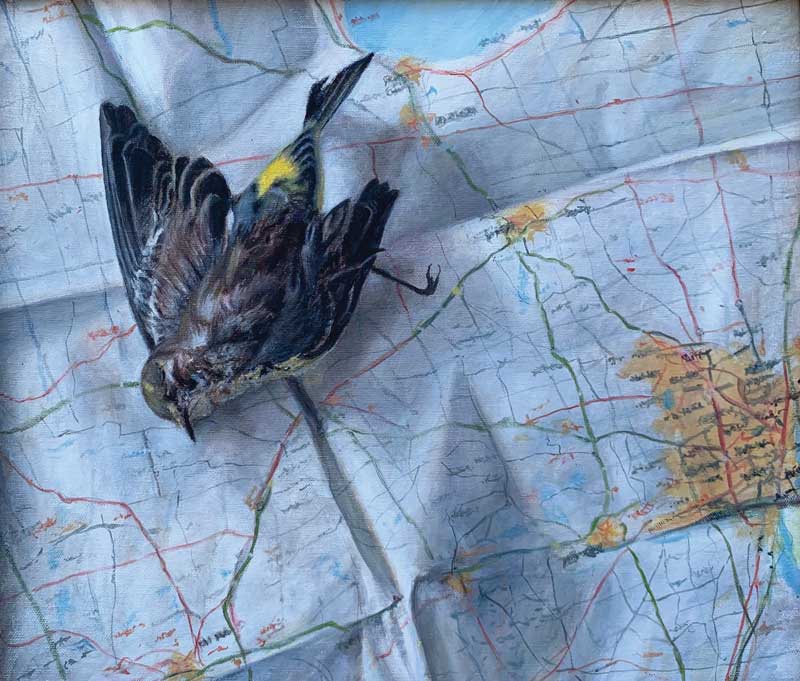 Coombs’s painting of a little dead bird on a map of Detroit was inspired by the shock of striking a bird while driving through Aroostook County in northern Maine. Photo by Peter Winter

James Lord “Jim” Coombs was born in Boston in 1947, where he grew up. He graduated from Harvard in 1969 with a degree in East Asian Studies and took off to explore the world, intent on returning to look for a job in the United States Foreign Service. Instead, he decided to commit himself to painting. He studied art at the University of Michigan School of Art and Design in Ann Arbor, from which he graduated with a B.F.A. He then returned east to set up a studio in a North Cambridge, Massachusetts, loft. But his mother’s family came from Winslow, Maine, and during his many visits north, the state of Maine captured his heart. He moved to Maine with his wife and daughter in 1984.

Coombs’s specialty is capturing the minute, concentrated detail of a scene. He has always painted like that, even before he began formal training. His concentration on the details of a scene produces what he calls “visual motivations” that capture the viewer’s attention. The danger, of course, is that the detail might overwhelm, but in art school he learned how to paint a whole picture at once.

“I learned to work all over the canvas at the same time even though I was painting separate details,” he said. 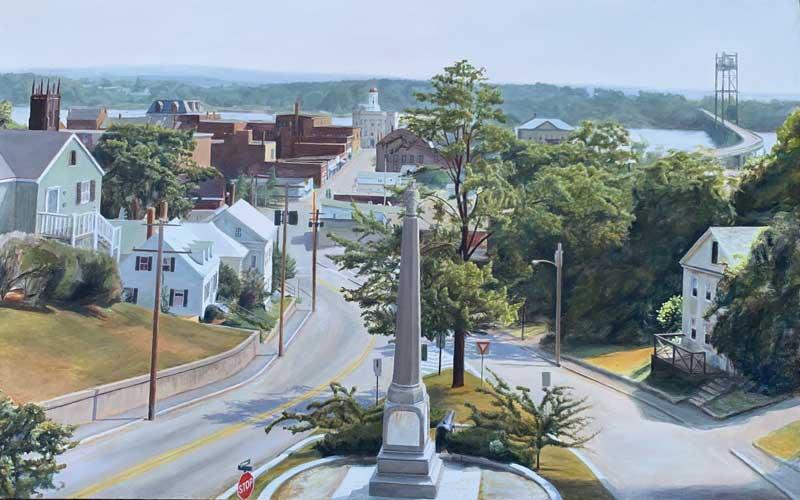 A painting of Bath shows the view looking down Centre Street. The old Carlton Bridge over the Kennebec, since replaced by the Sagadahoc Bridge, can be seen in the background, on the right. Photo by Peter Winter

As the layers of observation come together, a portrait emerges, and the nature of the relationship among the subjects is revealed. Coombs is a master of telling a story on canvas.

Where does this storytelling gift come from? Here’s another surprise; It comes from being born practically blind.

Until first grade, when an ophthalmologist prescribed the correct glasses for him, Coombs’s world had been just a blur. He was born severely myopic. But no-one, not even his mother, had realized how severe his condition was, even when he ran around the house bouncing off tables and chairs and tripping over steps.

“Before getting those glasses, I had already learned that with just the scantiest amount of information, you can recognize not just a person, but who that person is,” he said. “It’s like dogs that seem to gain an encyclopedia of information from just a sniff.” 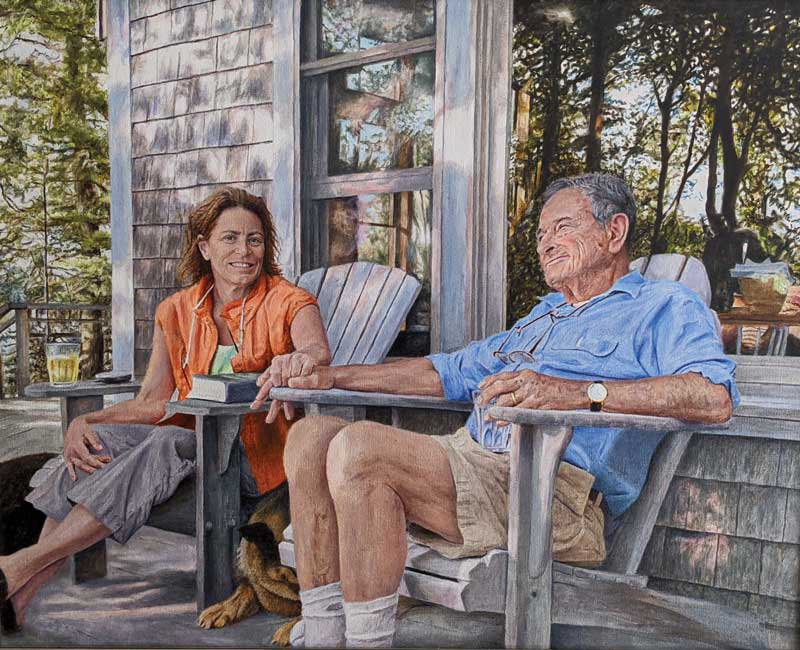 Coombs’s specialty is capturing the minute, concentrated detail of a scene, such as in this portrait of Susannah and David Place. Photo by Peter Winter

Coombs still talks of the extraordinary thrill of getting those glasses and how dramatically it changed his world. He started drawing the day he got them, and he never stopped. The glasses made it possible for him to express what he had already learned to “see.”

Living in Maine and running the dump has allowed Coombs the freedom to paint what he likes—a cityscape of Bath, a still life of a little bird that crashed into his car windshield with its legs turned black in death, a luminous eggshell.

The Georgetown Transfer Station is open Wednesdays and weekends. Outside those days, you can find “the artist who runs the dump” in his studio overlooking the Back and Kennebec rivers, producing his extraordinary art. When dealers from New York come calling, he tells them he’s just not interested.

“I’m the luckiest guy around,” he said. “I live here in Georgetown, and I do what I love to do. Why would I go to New York?”

Peter Winter lives in Georgetown. A former editor with BBC Television in the United Kingdom, he retired as divisional president of the media company Cox Enterprises and moved to Maine in 2012.