By Rob McCall
“There is a way that nature speaks, that land speaks. Most of the time we are not patient enough, not quiet enough to pay attention to the story.” —Linda Hogan, Chickasaw poet and environmentalist

Spring continues to march deliberately across the down east landscape. The shadbush (Amelanchier spp)—also known as serviceberry, high bush blueberry, June berry, and Saskatoon berry—is starting to bloom along the roadsides. So named because it bloomed while the shad were running (as they do no more), the shadbush is a shrub or small tree with smooth gray bark and blossoms with five thin white petals against a copper background. In late summer the berries look like blueberries but are less flavorful, though just as nutritious. In former times they were pounded into pemmican.

In the fields, bluets, blue violets, and white ‘dog-tooth’ violets are coming into bloom and dandelions are coming on in town. Along the roadsides the yellow coltsfoot, one of our earliest flowers, is going by, with thick white seed heads much like the dandelion. Beside them rise the primitive green stalks of the horsetail rush (Equisetum) also known as pot-rush for its gritty silicates useful for scrubbing pots. Early apples are showing some pink in their buds. 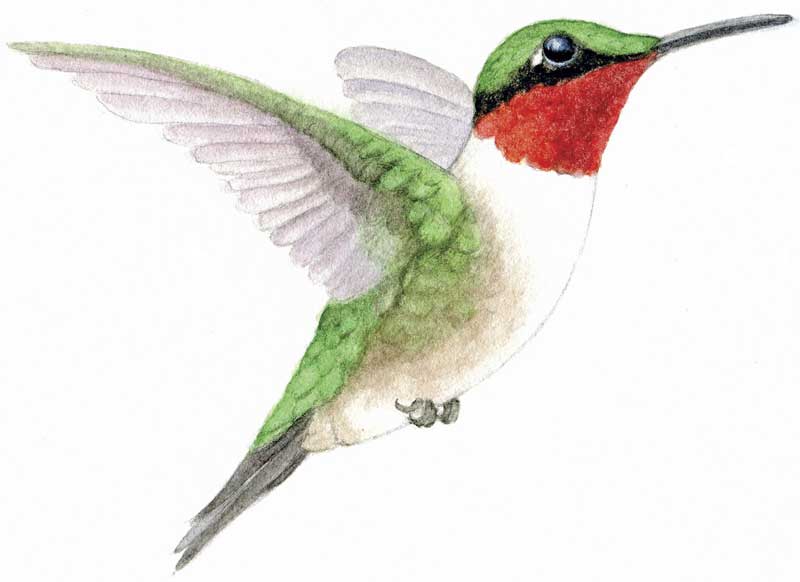 We were looking for the return of our local osprey pair this past week as we stood on the bridge over the Benjamin River, but instead we were delighted to see a pair of loons diving and fishing contentedly around the new bridge. Later the same day, hearing the whistling call of the osprey, we looked up and there it was circling high above and calling, “We’re here, we’re here!”  We’re also preparing for the arrival of the male hummingbird, which is expected this week. How these tiny bundles of frenetic energy manage to migrate all the way from southern Mexico or northern Panama still remains one of the marvels of the natural world. And of course, we are also noticing the arrival of the blackflies. Hummingbirds eat large numbers of insects to add protein and fat to their diet of nectar. That hummer darting through the air may just be nabbing black flies on the wing—all the more reason to welcome them back. We are cheered by returning songbirds, even if they are of the most common varieties. When a dozen goldfinches mob the feeders and spangle the surrounding trees with yellow while waiting their turn, it is a delight to the heart, never mind that goldfinches are numerous everywhere.

Like the osprey and the bald eagle, the common loon (Gavia immer) was once vulnerable across much of its range of northern lakes and bays, but today it is numerous from the Pacific Northwest to Scotland. Though lead poisoning from ingesting bird shot, mercury poisoning from industrial pollution, and watershed degradation are a danger to these majestic divers, the greatest threat is from waterfront development and resulting loss of habitat. Today the loon survives as the symbol and voice of the northern wilderness. But what about tomorrow? 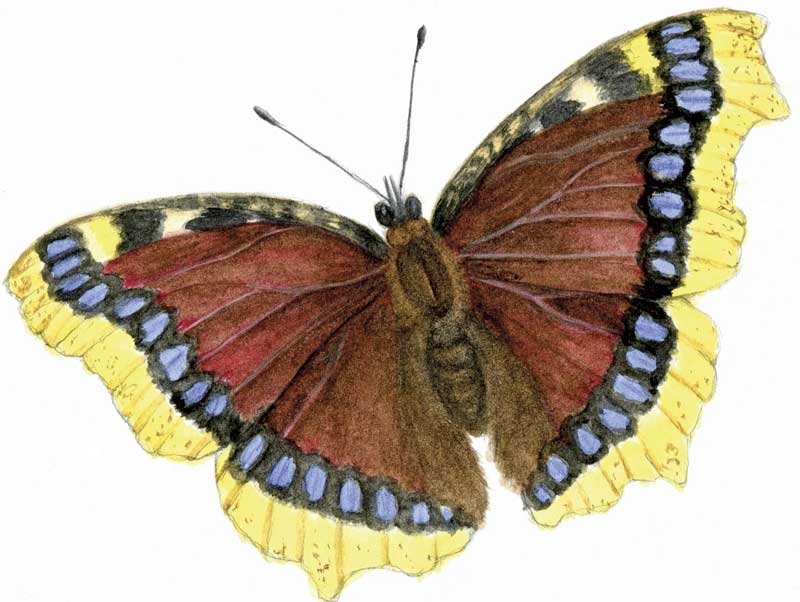 The other day, while working around the yard, I brought some lawn chairs out of winter storage. Tucked into a fold in the fabric of one chair was a dusky ragged remnant of the cold months. At first glance it might have been an old aspen leaf lodged there by the wind back in November. But a closer look revealed that I had found a moribund Mourning Cloak butterfly (Nymphalis antiopa). I blew on it lightly; no response at all. Knowing that this is the one Maine butterfly that over-winters as an adult, I put its perch where the sun could warm it and went about my business. Before I went in for lunch I checked and the tiny sprite was gone.

Over lunch I told my wife Rebecca about this little spring miracle. Her face lit up and she said she had seen it, too, flying gaily around in the garden. The miracle is how this frail small creature could survive for six cold months tucked into a fold of fabric with nothing to eat or drink, and then revive in a few minutes of sunshine. It’s so amazing you can feel it inside you.

Dandelion seed heads glow electric with the morning sun, like some geodesic design by Bucky Fuller. But no, they were designed by a much greater architect than he was. I can still see the vase where my mother would put the handful of dandelions we would bring in to offer her in the spring as a sign of our love and thanks for all those peanut butter and jelly sandwiches and chocolate chip cookies. Into the vase those crushed blossoms would go, and often enough in a day or so the house would be filled with floating dandelion seeds. They are so magical for a child. Goldfinches like them too, and sparrows. I watch them on the lawn pulling down tall dandelion stalks so they can peck out the seeds, snipping off the little parachutes first. Some people will try to suppress or eradicate dandelions from their yards, I forget why, but they are using a teaspoon to stop the tide. The seeds are floating in abundance everywhere, and the plants are so good for so many things. Efforts to suppress them are bound to fail.

Now that dandelions are in bloom we see domestic honeybees joining the wild pollinators as bee hives are brought into the orchards and barrens to pollinate these two important Maine crops.  Many commercial hives have worked their way up the East coast pollinating oranges in Florida, peaches in Georgia and will finish their spring labors in the blueberry barrens of Maine.

Back in the 1970s, when we were living in a 1760 post-and-beam farm house in West Concord, Massachusetts, we decided to have a summer solstice bonfire. We had been reading in Frazer’s Golden Bough about pre-Christian practices in the British Isles. It was mid-June, and we had a big pile of brush to burn, so this seemed like just the thing. Also, the house stood alone on a rise with two huge spruce trees in front, and one of the benefits of a solstice fire was said to be that the charred wood left over would protect your house from lightning. We had a spectacular fire with friends gathered around, and we saved a few charred pieces. After a few days we put them up in the attic, and were pleased when the house was not struck by lightning through the following months.

The next June we were headed to Cobscook Bay and a friend was staying in the house for us, so no solstice fire. When we came home from our sojourn we asked our friend how everything went. He said, “Everything was fine, but the house was struck by lightning on the solstice!” So, perhaps you can imagine why these memories come back every year about this time. Mother Nature was trying to tell us something.

There are few sights more beautiful than a fully-grown field or pasture in June. Tall stalks of orchard grass and timothy, long stems of buttercups and daisies and shorter ones of white and red clover all wave and ripple like a foam-flecked sea of green. The sheer volume of life filling the fields these days is enormous: pollen rising, green seeds plumping up, nymphs of grasshoppers and crickets being chased by hungry meadow mice and insectivorous birds. All this may become the first cutting of hay to be stored away for winter feed, or it may become a vast salad bar as pasture for hoofed creatures who convert the lush green into muscle, milk, meat, and wool for our comfort and prosperity. The domestication of grazing animals may have been our first foray into agriculture, allowing humans to move more easily from place to place leading the sacred cow. The bees that buzz about in that meadow were captured to give us sweets. After a time the grasses were tamed too, to give us wheat, barley, rye and other grains. The left-over straw was used to thatch roofs and make mud and wattle walls.

No wonder the sight of a full field fills the heart with contentment, and puts the soul at ease on a blue and green June day.

I have looked far and wide for a field guide to grasses in Maine and have found nothing even coming close to the now standard Plants of Acadia National Park by Mittelhauser, Gregory, Rooney and Weber, an essential guide with 36 colorful pages devoted to local grasses.

Rob McCall lives in Brooklin, Maine. This almanack is excerpted from his radio show on WERU FM, which is streamed on weru.org.