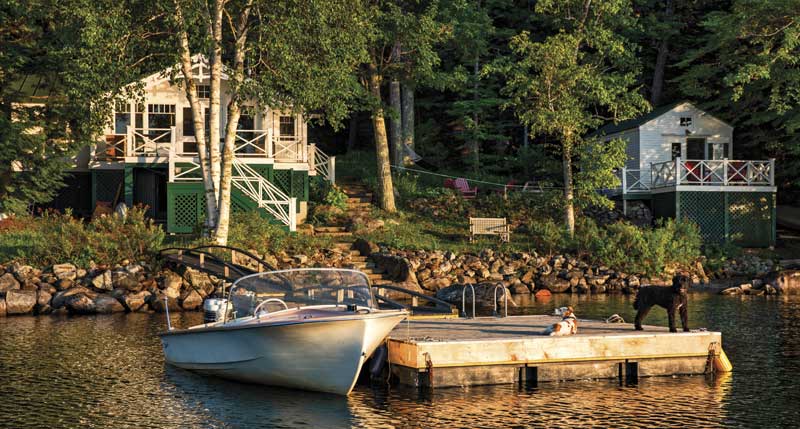 Though it doesn’t have an official name, the tiny camp that this couple bought almost 20 years ago earned one soon after the closing. “It became immediately clear that the place needed far more work than we anticipated,” said the wife. Among family and friends, it became known as The Folly.

What the three-bedroom cottage on Camden’s Megunticook Lake lacked in upkeep, it made up for in history. One of a cluster of former bathhouses for the Lake City Hotel, a late 19th-century pile that burned to the ground in the early 1900s, its most colorful owner, George Cleveland, ran the small excursion steamboat Titwillow on the lake. He also reportedly played cards with neighbors whose camps sometimes changed hands in poker games. The outbuilding, now a master bedroom, began life as a garage for a house in town.

“My goal was to preserve the feeling of the place, to take it back to its original charm,” said the owner. She furnished it the old-fashioned way: with family cast-offs, pieces found at estate sales, and local art. Instead of replacing the screen in the door, a friend mended it. The owner preserved as much of the interior pine planking as she could and stained any replacements to match. Though it was too far gone to save, the “new” kitchen looks as if it may have been redone in the 1950s, with a linoleum-like, Marmoleum floor and Formica countertops. Honoring the past didn’t stop with the interior, however. Cleveland had his poker, but this owner prefers a different high-stakes pastime. Every autumn, she and her husband host a regatta on the sprawling lake just beyond her front door. Dozens enter in their kayaks, lasers, paddleboards, blue jays, and sailing dinghies. “I buy the prizes, never more than a dollar each, and I try to make sure everyone is a winner. One year, I found John Deere mugs on remainder. Those were a big hit.” 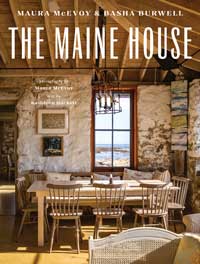 Kathleen Hackett is the author of Brooklyn Interiors (Rizzoli, 2015) and The Maine House (Vendome, 2021). Her work has appeared in Elle Decor, Architectural Digest, Veranda, and House Beautiful. She spends her summers in Rockport, Maine.

Excerpted from The Maine House, Vendome Press (June 22, 2021), by Maura McEvoy and Basha Burwell with text by Kathleen Hackett.