By Ronald Joseph
“Death is sometimes a punishment, sometimes a gift: to many it has come as a favor.”
Seneca, Hercules Oetaeus 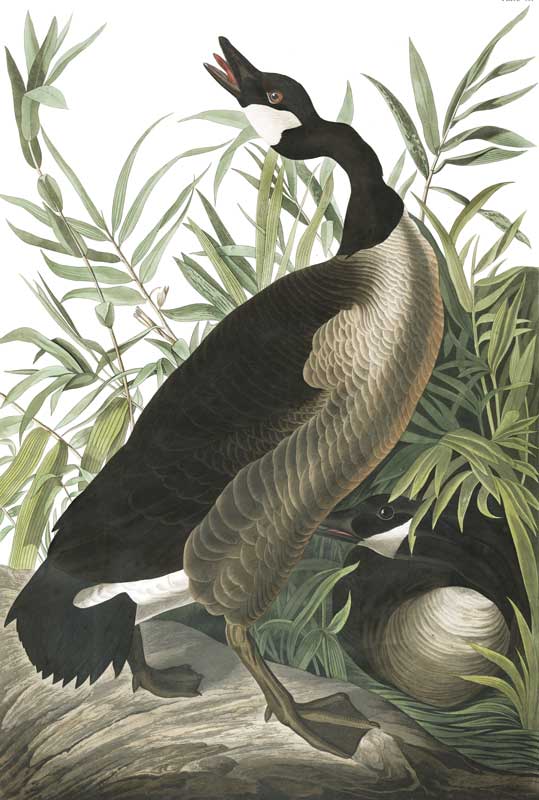 The oldest known Canada Goose was a female, banded in Ohio in 1969. She was at least 33 years old when shot by a hunter in Ontario in 2001. This image was drawn by John J. Audubon. Courtesy of the John James Audubon Center at Mill Grove, Montgomery County Audubon Collection, and Zebra Publishing

Having worked as a wildlife biologist for 43 years, I’m no stranger to dead animals. Young eagles electrocuted by powerlines, lifeless deer entangled in wire fences, a moose falling to its death from the cliffs of Mount Kineo, and dozens of warbler carcasses beneath lighthouse windows, all are sad spectacles.

My most heart-wrenching moment, though, was the sight of a Canada goose waiting out its final hours by an alder-shrouded brook flowing into Moosehead Lake.

In November 1989, a beaver trapper phoned the Greenville office of the Maine Department of Inland Fisheries and Wildlife to tell me about his unusual encounter with a “tame” sick goose. As the state’s regional wildlife biologist, I callously dismissed the report, reasoning that in nature, living and dying are separated by a very thin line. A few days later, a Scott Paper Company forester—a friend of the trapper—stopped at my Greenville office to ask if I’d seen the goose. I had not. Higher work priorities prevented me from tracking down a Canada goose. But after a deer hunter reported his encounter with the goose, I decided to find the bird that was causing a stir in the Maine woods.

It was late afternoon in Tomhegan township, on the west shore of Moosehead Lake, when I exited my state truck. A full moon was already rising in the east as I followed a meandering moose trail through a dense thicket of alders. Several hundred yards later, at a small opening on the bank of a brook, I located the goose. It was nestled on a pile of dry alder leaves. Not until I was within  20 feet, did it sense my presence, feebly waddling into the water and floating downstream toward me. Its cloudy eyes could not distinguish between the alders, boulders, and stumps into which it bumped.

The nearly blind bird came to rest on the bank at my feet, as if seeking my company. Talking softly, I picked up the goose and discovered that it was wearing a numbered aluminum leg band. I jotted down the numbers in my Rite in the Rain field notebook. I would learn, weeks later, from the National Bird Banding Laboratory in Patuxent, Maryland, that the female goose had been banded 13 years earlier by U.S. and Canadian waterfowl biologists in Nunavut, formerly the Northwest Territories, on the northern shore of Hudson Bay, 1,400 miles northwest of Moosehead Lake.

As light in my arms as a down-filled vest, the goose was too weak to struggle. Its flight muscles had atrophied, leaving the sternum as pronounced as the keel of a canoe. Green-colored fecal droppings littered the ground it had occupied for many days. Wringing the bird’s neck would end its misery, but I could not bring myself to execute the humane task.

I placed the goose back into the water, whereupon it weakly paddled sideways upstream before struggling up the bank to the pile of leaves that had become its chosen deathbed. I felt awkward, helpless, and surprisingly emotional. I had disturbed the goose in its final hours.

Walking back to my truck, I turned to look at the goose one last time. She sat motionless in the same spot where woodsmen had discovered her days earlier. The bird held its head high and did not waver. She had surrendered her eyesight and flight muscles but not her dignity.

Eyes that had seen polar bears and arctic wolves, early summer snow squalls, and countless sunrises and sunsets, merely stared forward blankly. Wings that had propelled her across thousands of miles of skies stretching from the Canadian Arctic to Chesapeake Bay would carry her no more. Webbed feet that had touched down on waters of the Atlantic Ocean, St. Lawrence River, wilderness lakes, and icy Hudson Bay now rested beneath silent wings on the bank of an unnamed brook in an unorganized Maine township. Her voice box, which had trumpeted the arrival of many springs and warned goslings of approaching arctic foxes, could muster only a few faint notes.

The winged warrior awaited her appointment with death. That night or the following day, this gallant goose would likely end up in the stomach of a predator.

In nature’s realm, however, no death is in vain. The meal the goose might become for a starving young mink could prevent the death of another creature. In the wondrous cycle of life, there is something mysteriously reassuring knowing that the essence of one Canada goose may live on in the heartbeat of a mink.

Writer Ronald Joseph is a retired wildlife biologist. He lives in central Maine.

Lengthy, informative notes on the bird can be found at: www.audubon.org/birds-of-america/canada-goose