A skiff designed for lake use

All photos by Ben Swan 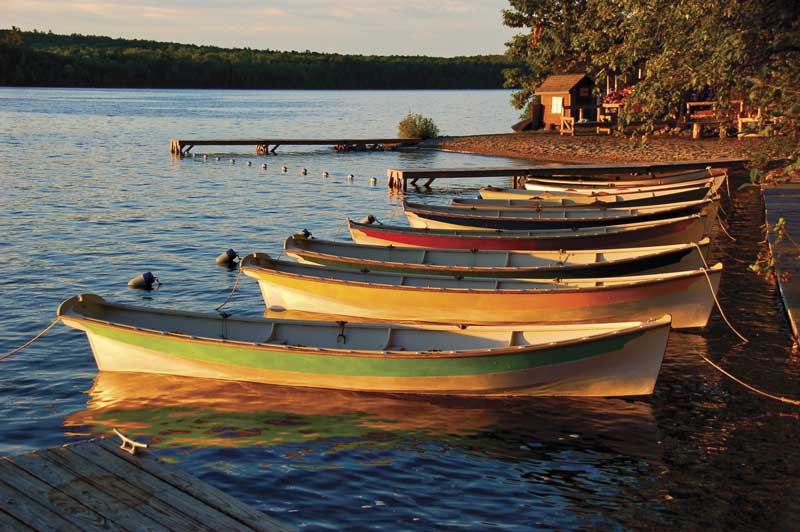 Twenty-five years ago, two men joined their talents to create a rowboat for a Maine summer camp—the result was a one-off design known as the Pine Island Skiff. More recently, when it became clear that the camp’s original, aging fleet would soon require replacement, a plan was hatched to perpetuate a remarkable design that for countless oarsmen, young and old alike, has come to signify the very essence of summer itself.

The story behind the Pine Island Skiff’s origin begins in the early 1990s, when Ben Swan had recently become director of Pine Island Camp in Belgrade Lakes, Maine, and was in the market for a rowboat to replace the camp’s well-loved, and worn down, fleet of Gloucester Gull dories. He was the third generation of his family to hold the directorship since his grandfather purchased the boys’ camp in 1908. While Swan weighed his options, he did what any savvy director would do whose camp specialized in traditional small-craft skills, he contacted the late John Gardner. Then the small-craft curator at Mystic Seaport Museum, Gardner had worked for Swan’s grandfather in the late 1920s and early 1930s. Gardner recommended the Amesbury Skiff (the design in favor during his years at the camp) and encouraged Swan to hire builder and designer David Stimson to do the work. Stimson went on to build four Amesbury Skiffs for Pine Island Camp. While Gardner’s design suggestion wasn’t the perfect fit—the young campers found the skiff too slow—his choice of craftsman proved prescient.

In the decades since, Stimson has built 19 boats for Pine Island Camp, including skiffs, dories, light sailboats, and catboats. 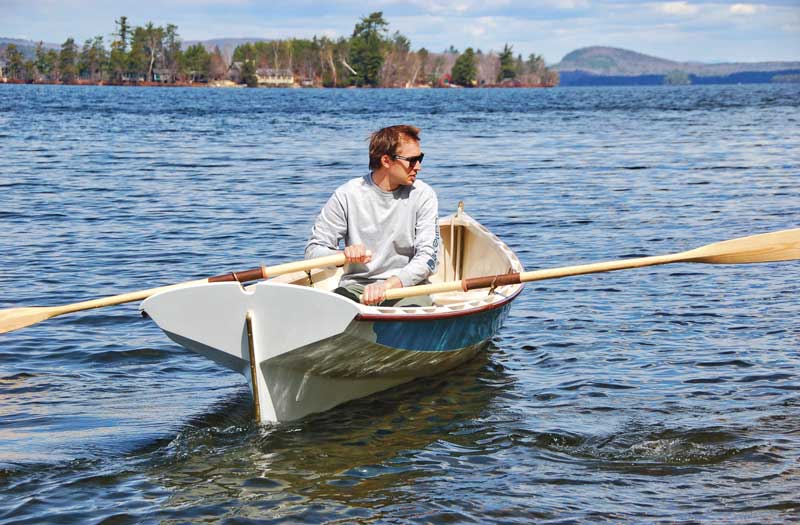 Ben Swan and his son Harry (shown here) trailered the new skiff, Pete, to Great Pond for its inaugural launch in May of 2019. Harry Swan is a former Pine Island camper, counselor, and assistant director. 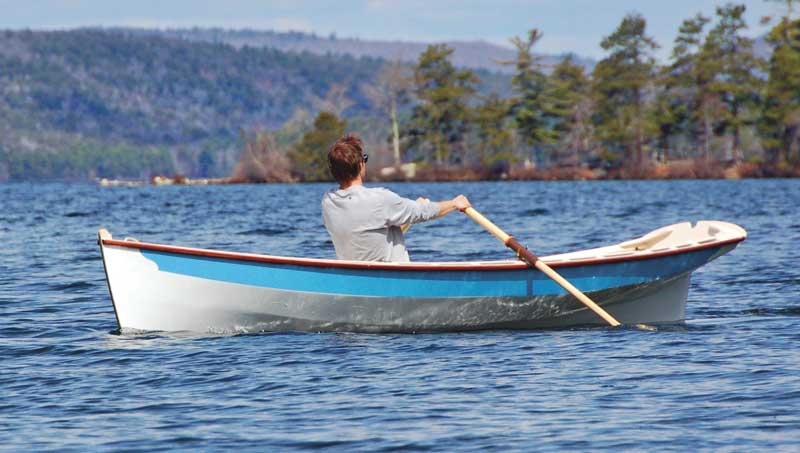 By the mid 1990s, Swan and Stimson were back at the drawing board, looking for a rowboat design better suited to the campers’ needs. Swan suggested that they might do just as well to return to the Gulls. Stimson—who has had boat designs swirling through his consciousness since he was a teen—countered. “I think we can do better,” he said.

The two men set to work to design the perfect rowboat for a Maine lake. At the time, Stimson had been researching the designs of Billy and John Atkin who, in turn, were influenced by the grace and utility of the Maine Salmon Wherry and Sea Bright Skiff. In these flat-bottomed designs, Stimson noted, “the lowest strake—the garboard—flares outward amidships, but it turns into a built-down skeg at the stern.” This construction leads to a double-ended shape below the waterline. Stimson also had in mind a scaled-down version of a rowing gig.

Swan, for his part, combined a keen sense of his campers’ needs with decades of firsthand experience plying the expansive waters of Great Pond upon which diminutive Pine Island resides. He wanted the boat to have at least two functional rowing stations, be seaworthy, and be well-balanced; it also needed to be ideal for rowing instruction without compromising agility or speed.

Stimson chose stitch-and-glue plywood construction for his new design, which simplified assembly and minimized wood waste. The hull’s exterior was finished with Dynel fabric and epoxy. He also opted to build three rowing stations into the Pine Island Skiff, which optimized it as a platform for teaching.

“When the instructor faces the camper he can easily reach the oars of the young rower and then, once they’ve learned, it’s a fabulous boat to row,” Swan explained.

In 1997, Stimson delivered four fifteen-and-a-half-foot skiffs. In christening the fleet, Swan pondered what came in fours and settled upon The Beatles, a quartet he had long admired. Thus, John, Paul, George, and Ringo were launched.

Shortly after the Edwards Dam was removed in 2000, Swan and his son, Harry, took one of the skiffs on a three-day trip down the Kennebec River. Since then, the trip has become a staple for the camp. Swan imagines a future where the skiffs will be taken on more remote adventures up toward Moosehead Lake and along the West Branch of the Penobscot River. Of course, the boats can most frequently be found upon the native waters of Great Pond where campers—who live in wall tents lit by kerosene lamps—are given a plethora of vessel choices: from kayaks and canoes to dories and catboats. However, most trend toward a favorite.

“They all want to row the skiffs,” said Swan, chuckling.

Pine Island Camp offers a single six-week session each summer for 90 boys aged nine to fifteen. Rowing at the camp is called O.A.R (the Organization for the Advancement of Rowing) and campers can work their way through four ranks: Oarsman, Grand Oarsman, Lt. Commander, and Commander. Campers can take a skiff out by themselves once they earn the Oarsman title.

Maine summers harbor a timeless quality infused with nostalgia and natural beauty. Pine Island Camp bottles this magic, a truth realized through the dedication of its alumni. This loyalty has led to various lasting volunteer efforts, among them an autumn tradition of gathering to maintain the camp’s fleet of small craft, an event created in honor of a young counselor who passed away prematurely.

Rob Whitehouse is one such devoted volunteer who, over the years, has taken a leading role in the annual maintenance weekend. Whitehouse, a retired engineer, was a camper in the late 1960s (his children and his father are also alumni—a common story at Pine Island Camp). Several years back, Whitehouse approached Swan to let him know that the skiffs were beginning to show their age. Whitehouse, who in retirement had taken up boatbuilding and recently finished a twenty-six-and-a-half-foot cruiser, was interested in spearheading the skiffs’ replacement. He reached out to Stimson and learned that the boatbuilder’s original plans, preserved on floppy disc, had been destroyed by mice.  Stimson had, however, until quite recently, still been in possession of the skiff’s patterns.

“I finally decided I wasn’t going to build another,” Stimson recalled. “And I cut them up.” 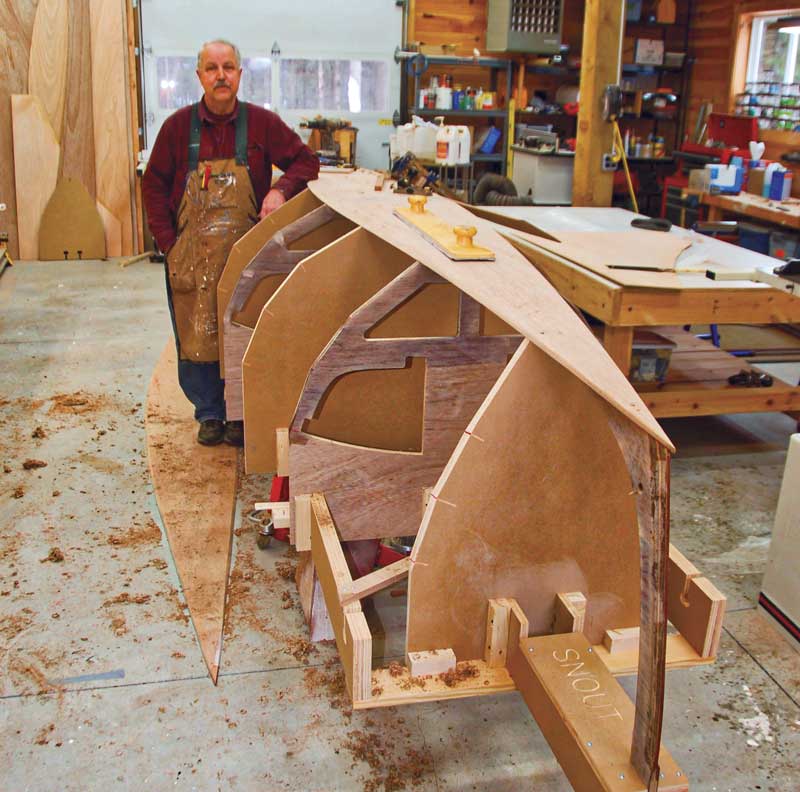 Pine Island Camp offers a single six-week session each summer for 90 boys aged nine to fifteen. Rowing at the camp is called O.A.R (the Organization for the Advancement of Rowing) and campers can work their way through four ranks: Oarsman, Grand Oarsman, Lt. Commander, and Commander. Campers can take a skiff out by themselves once they earn the Oarsman title.

Still, he gave his permission for the lines to be taken and, in a serendipitous turn, Stimson’s son, Abe (an alum and former counselor as well as the co-leader of the maintenance weekend), helped Whitehouse choose the fairest skiff, Ringo.

In an effort to perpetuate the design and simplify its future construction, Whitehouse used an AutoCAD program to loft the lines and generate plans. He also made CNC files so that the skiff’s parts could be machine cut. (The digital plans and CNC files are now available through Pine Island Camp.)

While Whitehouse considers his construction a hybrid approach (he used a mold to maximize fairness) he noted that the skiff effectively remains a stitch-and-glue boat built with marine plywood and reinforced with fillets and fiberglass on the inside and Dynel fabric on the outside.

“It’s extremely stiff and very strong,” he explained, adding that the skiff weighs approximately 150 pounds. “Two adults can easily lift it,” he said.

The project took eight weeks. Whitehouse donated his time, while the cost of materials was covered through Swan’s fundraising. At christening time, Swan, hesitant to stray far from tradition, named the new skiff, Pete, after Pete Best, The Beatles drummer who was replaced by Ringo Star.

“It’s a joy to row no matter who you are,” explained Whitehouse. “It’s easy to turn and maneuver and it’s stable. It slides through the water…three adults can make it fly.”

Whitehouse is quick to circle back to a more philosophical, even cautionary, outlook. “A boat is just a thing,” he said. “It’s important only in its context.” 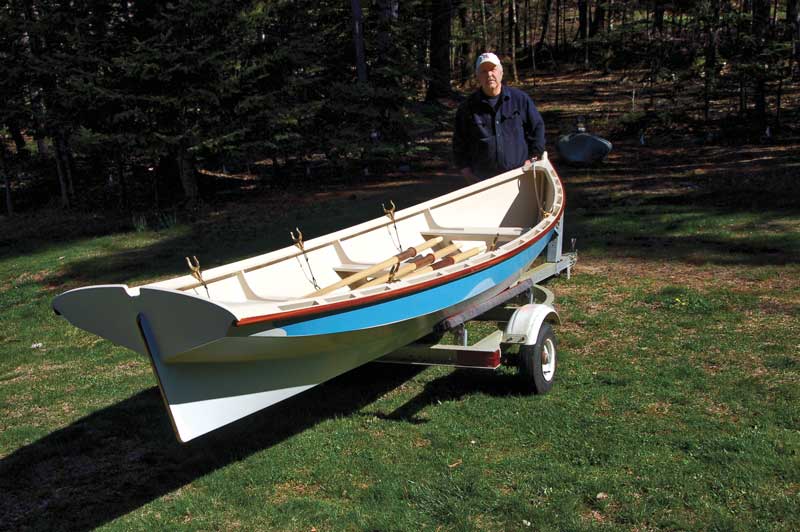 Pete and the builder, Rob Whitehouse, outside Whitehouse’s Brunswick home.

The true meaning of the Pine Island Skiff, Whitehouse suggests, is wrapped up in its atmosphere. As such, it becomes a reflection of the camp’s culture and the landscape upon which it was born: the rustic setting, the camaraderie and traditions, freedom from electronics, and an endless summer on the water.

“We’re close to civilization… but the kids feel like it’s very remote,” noted Swan, who retired as director of the camp in 2019. He remains director of operations where his duties include oversight of the camp’s small craft fleet. His replacement as director, Sumner Ford, had been a longtime camper and counselor.

Something special happens on that sliver of an island, barely 50 yards across, and few who attend forget their enchanting summers in Maine.

Donnie Mullen is a writer, photographer, and educator who lives in Camden with his family.

For digital plans and CNC files of the skiff, contact Pine Island Camp at 207-465-3031. To learn about the camp’s offerings, visit www.pineisland.org.